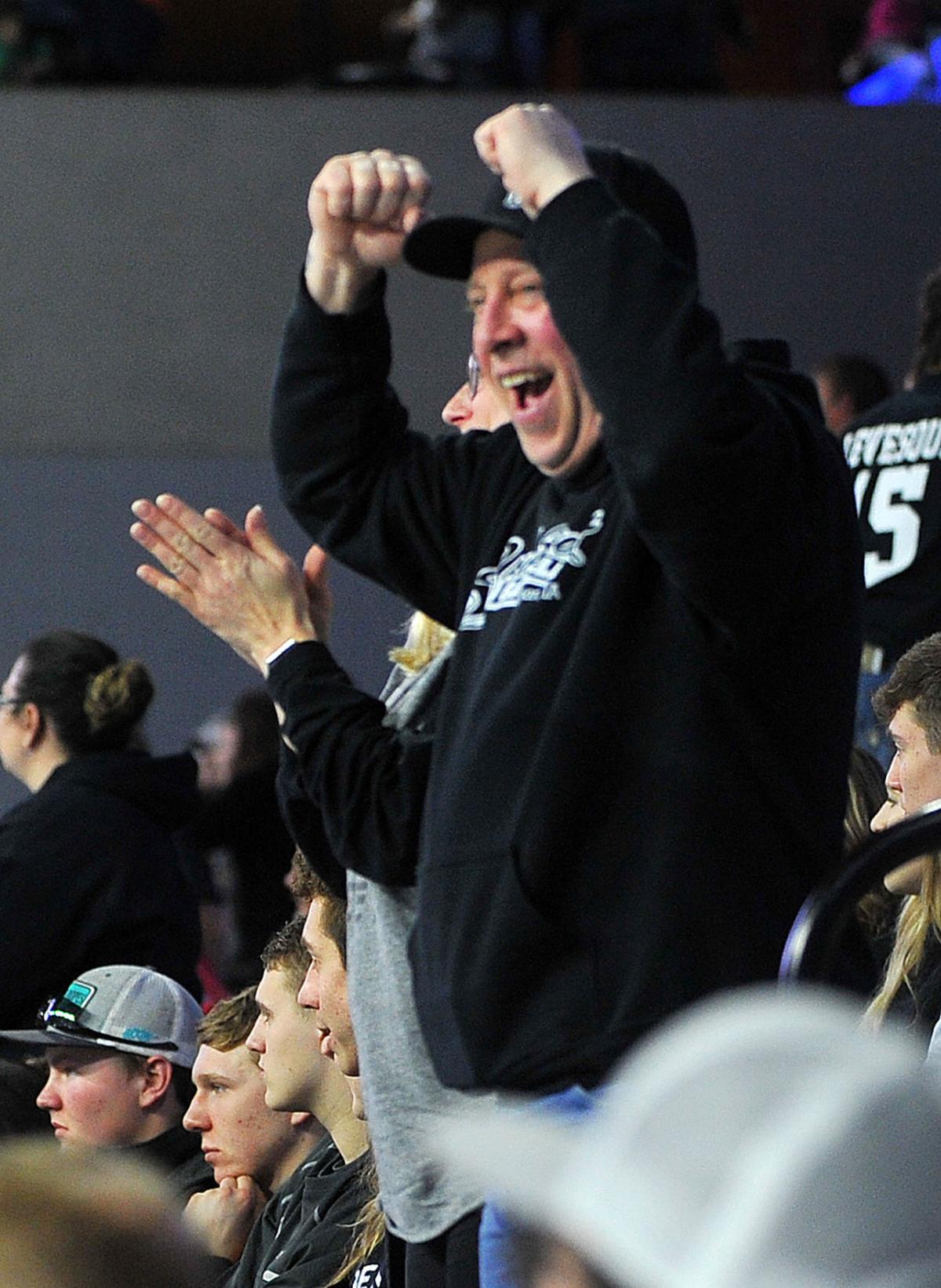 Quad City Storm fans celebrate over the weekend at the TaxSlayer Center in Moline. 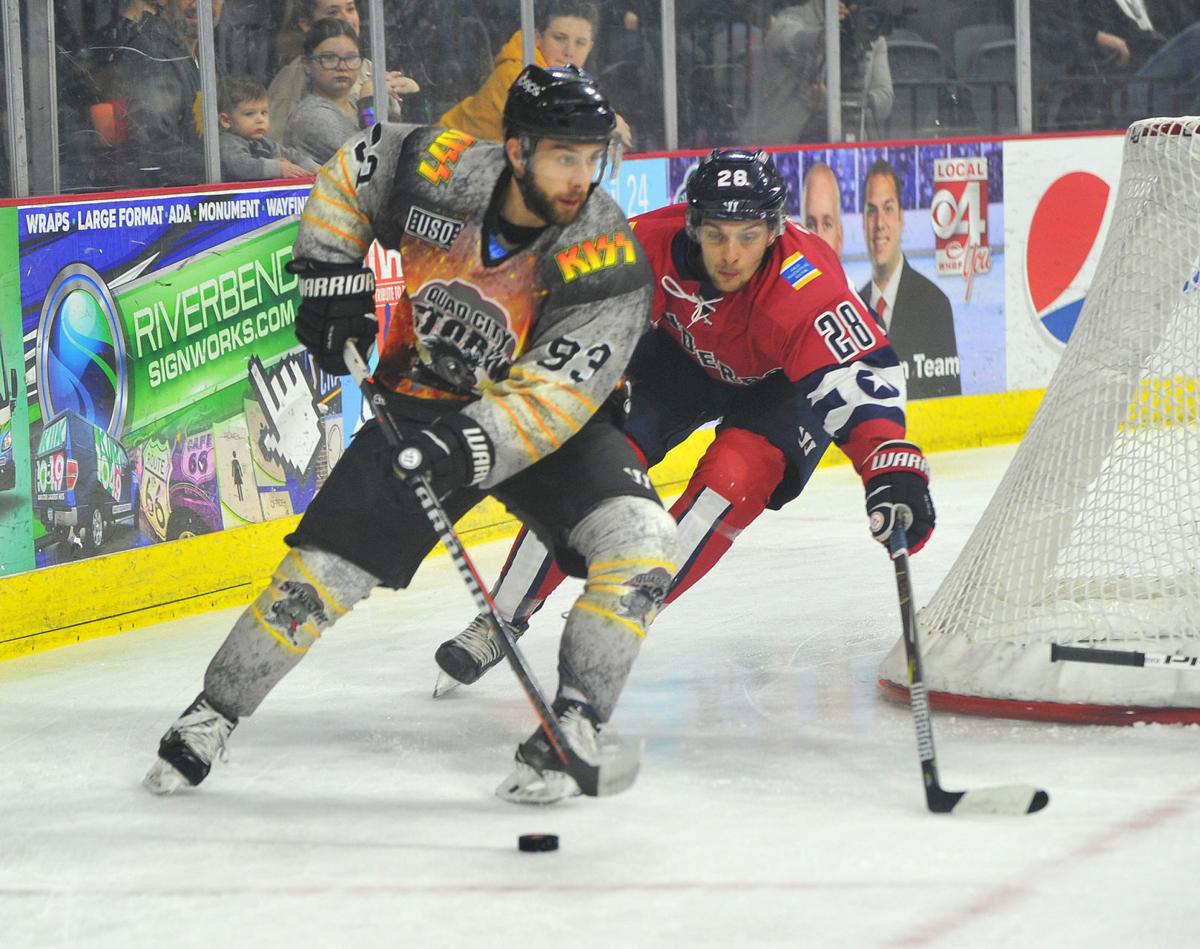 The Quad City Storm's Stephen Gaul takes the puck around the back of the goal as Evansville's LJ Fellows moves in during the first period last weekend at the TaxSlayer Center in Moline. 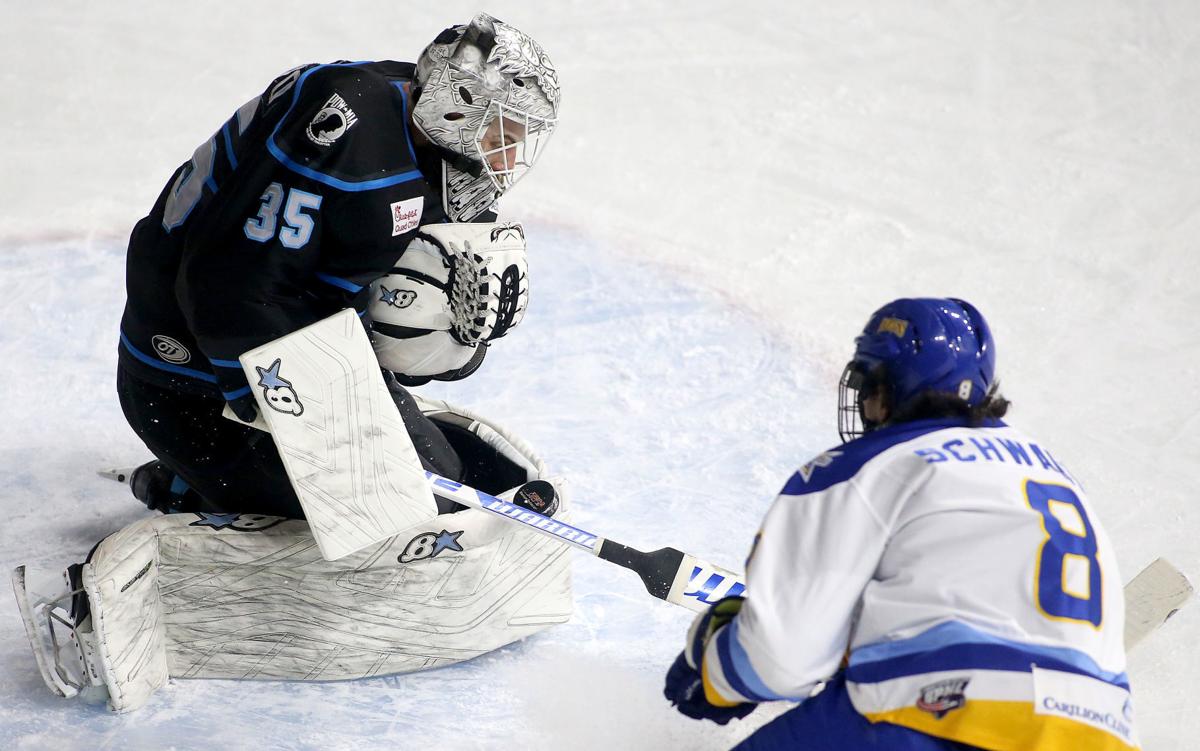 MOLINE — For the second straight season, playoff hockey will likely elude the Quad-Cities, but the future of the sport is much brighter than it was a year ago.

It's been one full year since the Quad City Mallards announced they were ceasing operations. The Quad City Storm have jumped in, and though the team has struggled on the ice — 12 points out of a playoff spot with nine games remaining — the franchise has taken solid steps to ensure a lasting stay in the community.

"I'm excited. I've seen what we've accomplished so far, and there's still so many ideas we haven't had the opportunity to do," Storm co-owner John Dawson said. "I really think things are in the right direction and we're going to be here a long time."

Dawson and co-owner Ryan Mosley had just 3½ months to put a team together from scratch after buying a Southern Professional Hockey League franchise in late May. That time had to be spent hiring front office staff, a coach and hockey operations staff, buying all new equipment for the locker room, trying to build a season ticket base and sponsorships, and many more tasks that established teams don't have to deal with.

Despite the fact the Storm have won just 15 games and are in ninth place in the SPHL, fan support has been strong and hasn't dwindled. The Storm average 3,095 fans this season, sixth in the league and just slightly below the average attendance from last season.

In the ECHL, that might not have been enough to sustain the team. In the SPHL, where operating costs are much lower, the Storm are enjoying some stability.

"We're really optimistic," Dawson said. "We look around and see a lot of fans in the stands. We think we're really moving in the right direction, and we think a lot of pieces are falling into place for us."

That support has allowed them to give back to the community, raising $38,750 for the USO of Illinois last week with their KISS Night. John Deere Night, for years one of the biggest nights of the season for the Mallards, is set for March 22, the last home game against the fast-turned bitter rival Peoria Rivermen.

With two more jersey auctions remaining, the Storm expect to raise more than $100,000 for various charities and organizations this season.

"We've not only brought entertainment and an activity but we're helping people," said Dawson, who is a veteran and a member of the VFW. "That's very important to me. ... Anything that fosters the sense of community is good for all of us."

KISS Night was just the latest example of how the Storm have made community a focus. The game was originally scheduled for Jan. 22 but postponed due to weather. The Storm took the opportunity to turn the rescheduled game into a promotion and in about six weeks made it one of their biggest of the season.

Things like that can help the Storm's relationship with corporate sponsors, many of whom took a "wait and see" approach following years of ups and downs with the Mallards.

The Storm feel they've done enough this year to build up trust and hope to have an even bigger presence next season.

"We said we'd give back, and I think we've proven that we have," team president Gwen Tombergs said. "I've had several sponsors come up and say to me 'Love our relationship, love what you're doing and we want to support you.'

"We've built a reputation that we're proud of, and we've delivered on our promises."

A big key for next season will be improving the on-ice product. The Storm have played better recently, 4-5-1 over their last 10 games, but struggles throughout the season have led to the possibility the Storm could be eliminated from playoff contention this weekend.

The short offseason that hindered the front office also limited first-year coach Dave Pszenyczny. This summer, with a full offseason to build and prepare and learn from his rookie season at the helm, Pszenyczny feels the team can make a leap next season.

"I think we've got a good core of guys that are going to come back, guys that are excited. They want to be here," Pszenyczny said. "The talk from other players is that they want to come here, which makes my job a little easier on the recruiting part."

Pszenyczny constantly mentions the fan support away from the rink as an indicator the future is bright for the franchise, and he makes sure the players are involved in the community as well to show their investment.

It's something he learned while playing for the Missouri Mavericks, who routinely average over 5,000 fans a game, even in years they don't make the playoffs.

"I don't necessarily think, in minor league hockey, there's a correlation between the fan base and what's on the ice," Pszenyczny said. "I think what was going on prior, with the (Mallards), there's a lot of things they weren't doing that they probably should have done and they got away from it and people were fed up with it.

"That being said, it's nice to see and be recognized in the community."

The key over the summer is to make sure that recognition doesn't vanish before next October.

"I think some teams take the summer off. We're not going to do that," Dawson said. "There's so much we can do getting ready for next year and over the summer ... the fun things to stay out there and relevant in the community so people don't forget about us."

Quad City Storm fans celebrate over the weekend at the TaxSlayer Center in Moline.

The Quad City Storm's Stephen Gaul takes the puck around the back of the goal as Evansville's LJ Fellows moves in during the first period last weekend at the TaxSlayer Center in Moline.