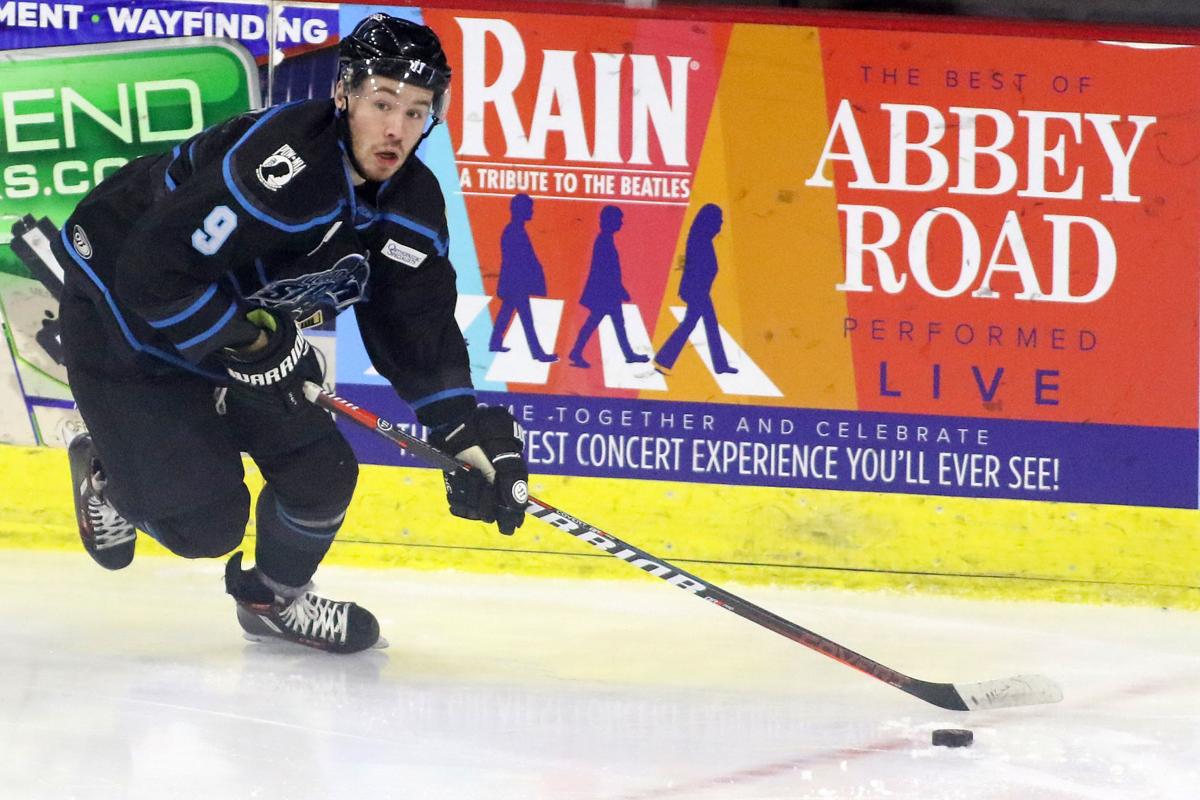 Quad City Storm's Shane Bennett controls the puck against Roanoke during action earlier this season at the TaxSlayer Center in Moline. 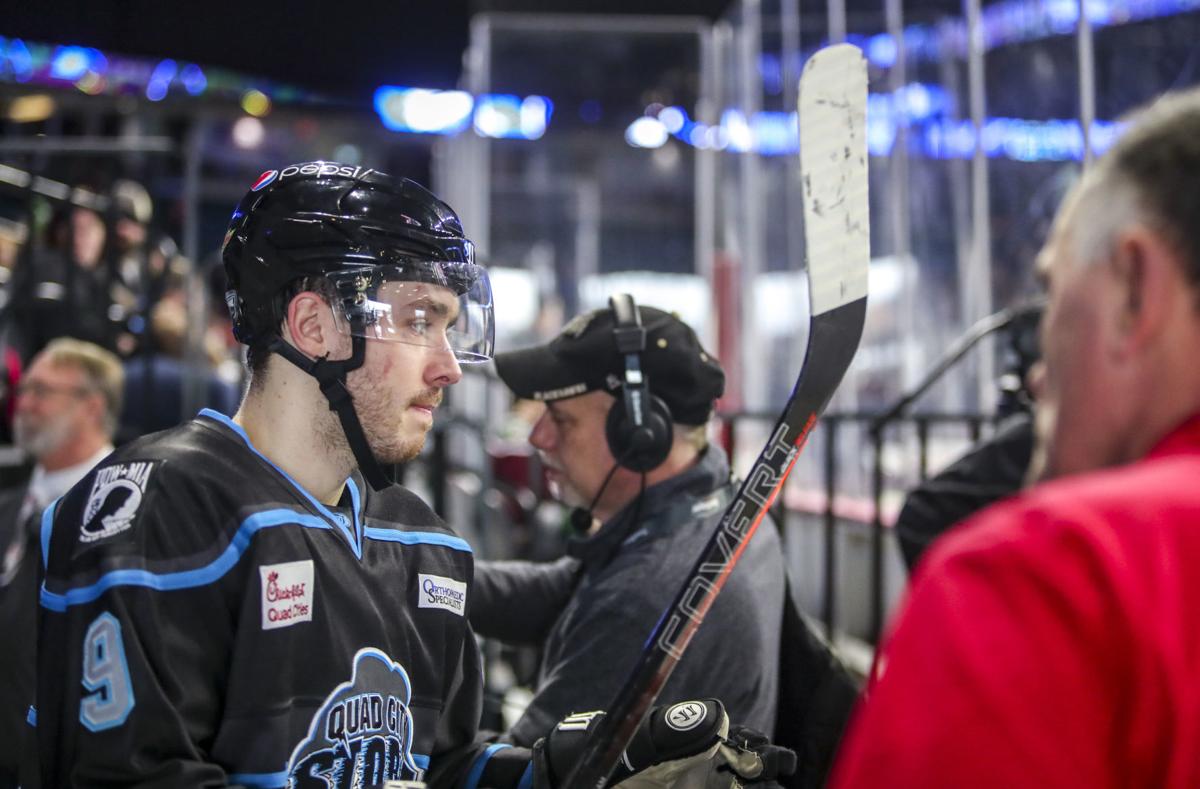 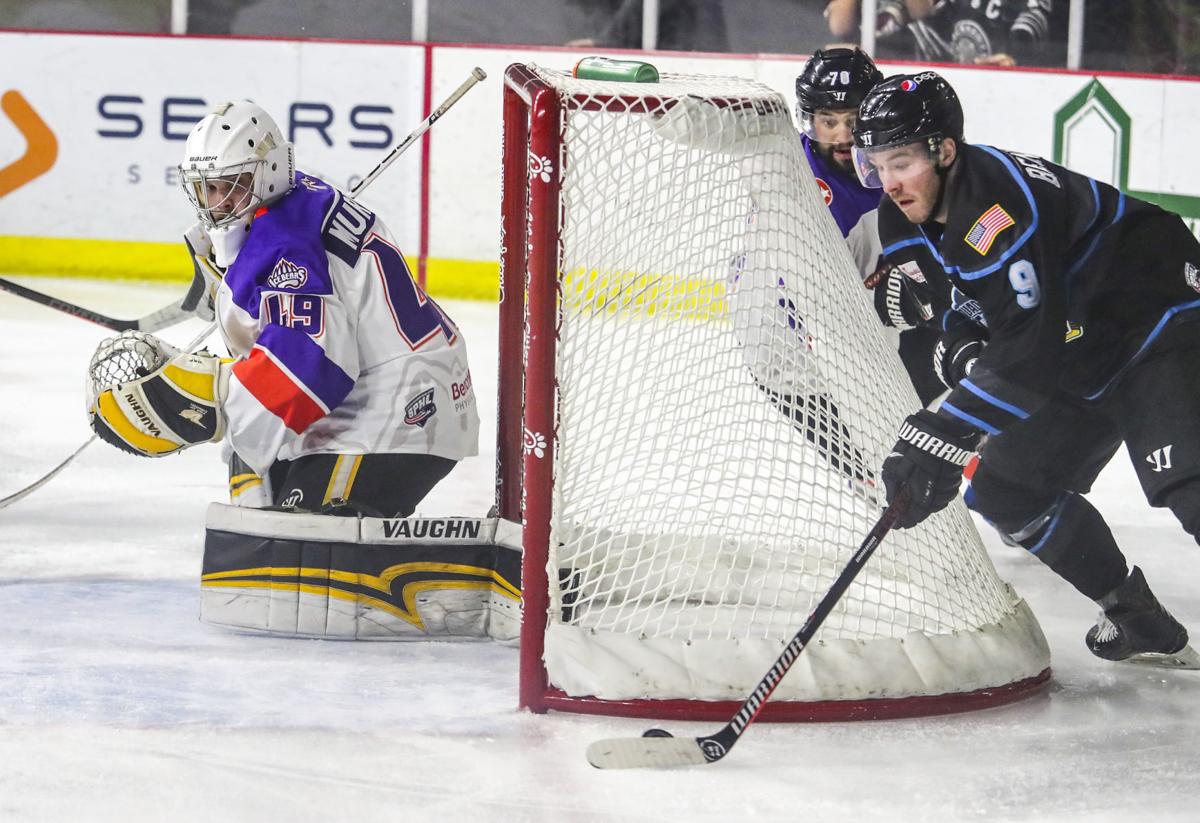 Quad City Storm left wing Shane Bennett takes the puck behind the goal to attempt a shot on Knoxville Ice Bears goaltender Alex Murray during the second period of their game at the TaxSlayer Center in Moline on Jan. 13. Bennett has scored 26 points in 29 games with the Storm.

With the regular season winding down, Quad City Storm head coach Dave Pszenyczny isn't quite ready to turn his focus to the summer.

The Storm were eliminated from playoff contention on Sunday, but still have six games left to close out the regular season.

Once April 7 hits and the offseason fully arrives, Pszenyczny can then put his full attention on who he wants to re-sign, protect and target for next year, but right now, he's focused on Friday's home game against the Peoria Rivermen.

"I'm still cutting film, still doing what I've got to do to get these guys ready to win games," Pszenyczny said. "It's kind of hard to figure out who you're going to protect off a team that doesn't make playoffs."

Barring the addition of another expansion team to the Southern Professional Hockey League, Pszenyczny will be able to protect 13 players for next season and though he's still evaluating who he wants to bring back, forward Shane Bennett has emerged as one player the head coach would like to see in a Storm jersey again this fall.

"He's one, there are a few others I have in mind as well," Pszenyczny said. "I've got to fit the pieces of the puzzle that we didn't have this year as far as a leader. Need a power play defenseman, that's for sure and we need a leader up front."

Bennett has emerged as one of the offensive leaders since being acquired by the Storm from the Fayetteville Marksmen on Dec. 30.

In 20 games with the Marksmen, Bennett scored three goals and added six assists but since joining the Storm, the 25-year-old from Grand Island, New York has scored 12 goals and added 14 assists in 29 games, nearly a point-per-game player.

He leads the Storm in points this season and is second on the team in goals, despite playing just half a season in the Quad-Cities.

"When I was in Fayetteville, I don't really know what the problem was, I just didn't feel like myself I guess," Bennett said. "Then I came here and Chezy gave me all the opportunity in the world to play and with all the trades he's been making, he's been bringing in a lot of talent so I think everything all together has really helped me."

Though Bennett credits Pszenyczny with bolstering his confidence, the Storm head coach only admits to granting his players chances to make the most of their skills.

"It's funny because people always say you gave him confidence and I don't give anybody anything," he said. "Just put them in an opportunity where I think they can succeed and it's what they want to make of it."

Bennett had a strong rookie season last year, putting up 11 points in 16 games with the Marksmen before being traded to the Mississippi RiverKings, where he tallied 26 points in 39 games.

Though he returned to Fayetteville in the offeason, Bennett didn't get the opportunities he expected, buried on the third line and sometimes as a 10th forward. When he came to the Storm, the opportunity to play more and the trust Pszenyczny allowed him helped him break out.

"He just kind of told me to trust my instincts," Bennett said. "I've been playing a long time — we all have — and he just trusts me and I guess playing the way I want to play helps me out.

"It feels good. I didn't know what was wrong earlier in the year. I didn't know if I didn't have it any more or I wasn't motivated or what it was but now it feels great. I just feel better all around, at the rink, away from the rink, everything's a lot better."

Bennett's speed is his most noticeable skill on the ice but Pszenyczny also credited his hockey intelligence as what's allowed Bennett to succeed for the Storm.

It's never a guarantee the forward will return next year, a shot in the ECHL the goal and a strong possibility to start next season. But if Bennett plays next year in the SPHL, he'd welcome another chance to play for the Storm, and for Pszenyczny.

"I've been lucky to have him as a coach this year,"  Bennett said. "He's definitely been the best coach I've had in a while. I wouldn't want to get away from him after all the opportunities he's given me."

Quad City Storm's Shane Bennett controls the puck against Roanoke during action earlier this season at the TaxSlayer Center in Moline.

Quad City Storm left wing Shane Bennett takes the puck behind the goal to attempt a shot on Knoxville Ice Bears goaltender Alex Murray during the second period of their game at the TaxSlayer Center in Moline on Jan. 13. Bennett has scored 26 points in 29 games with the Storm.