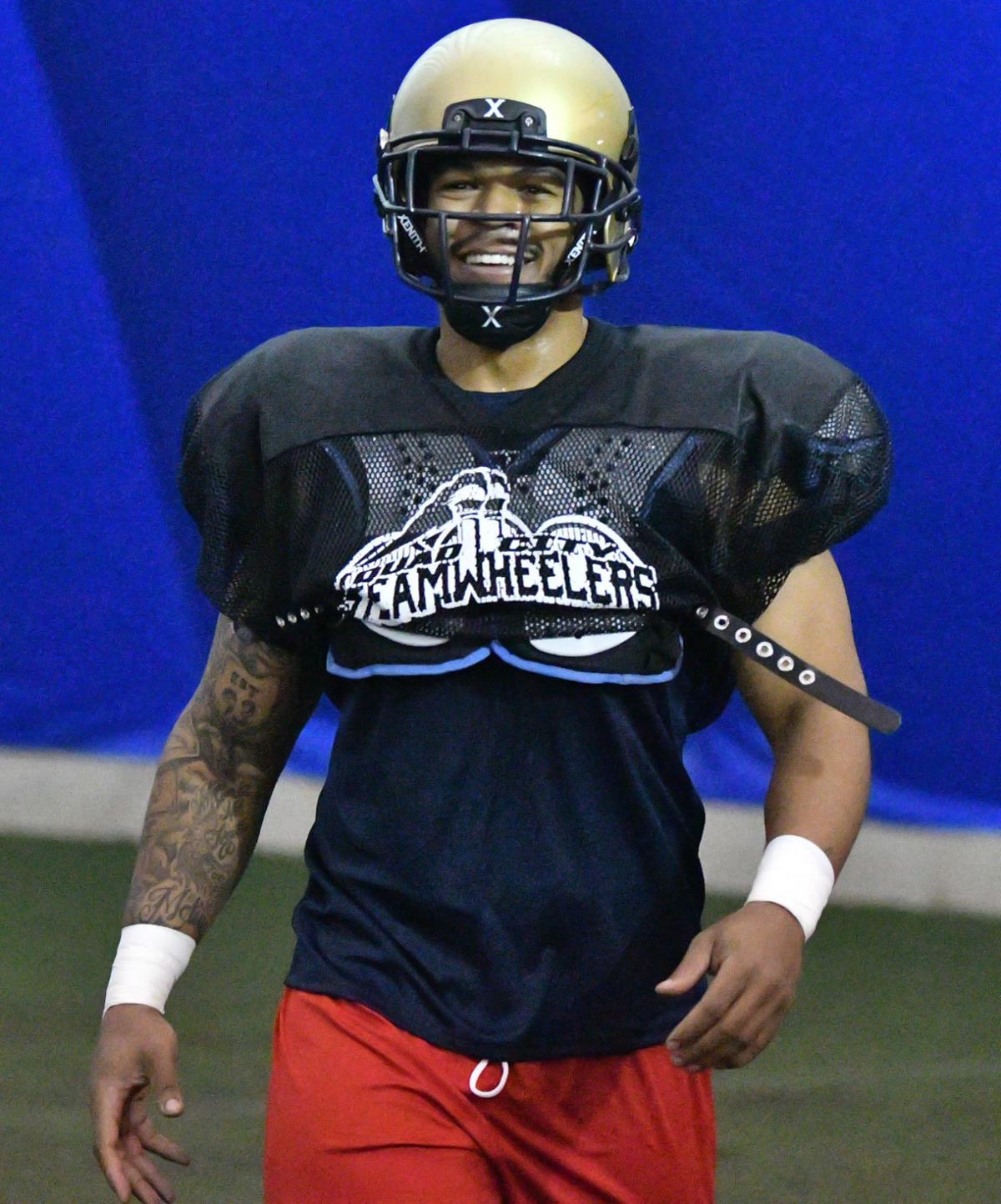 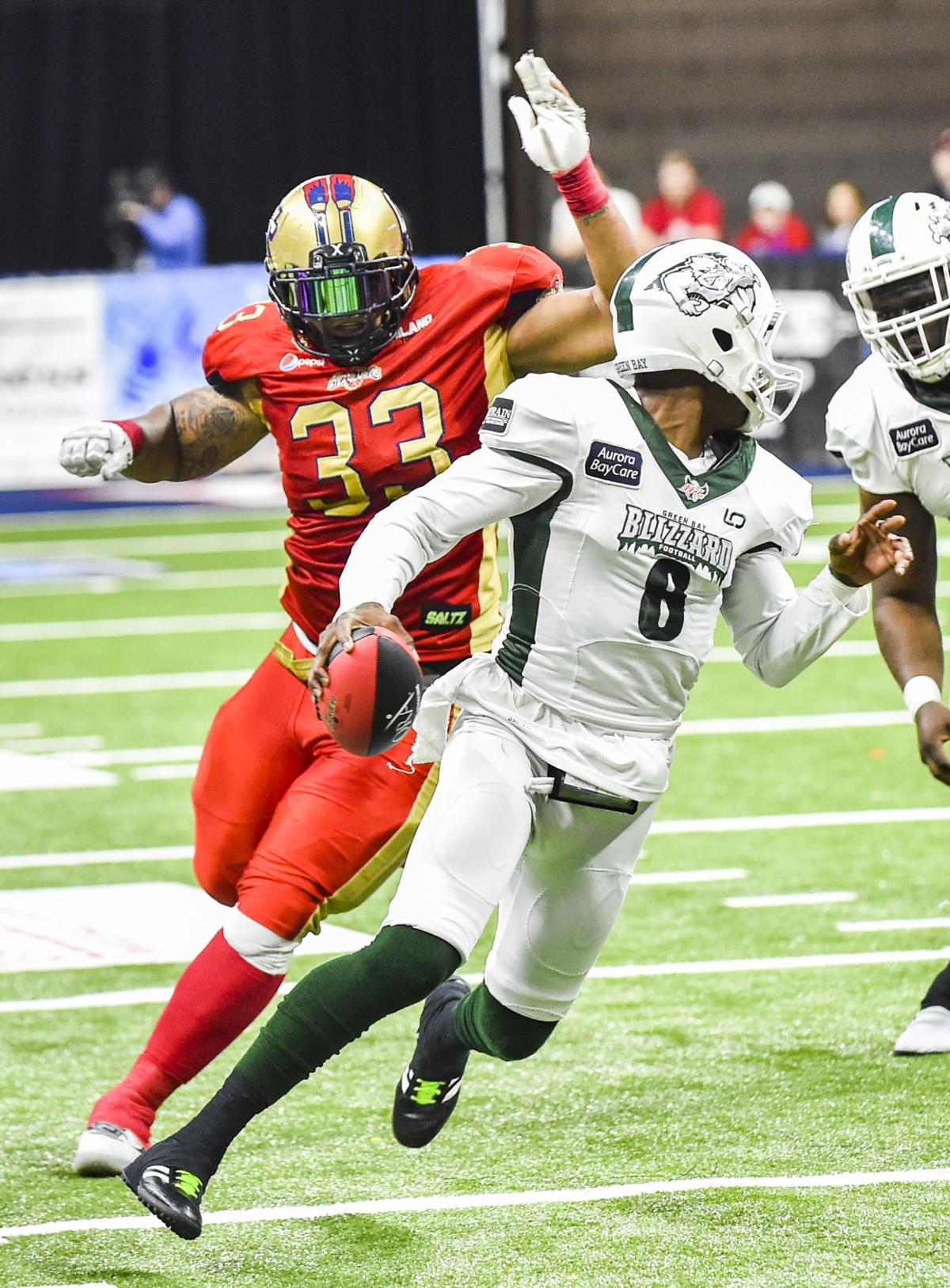 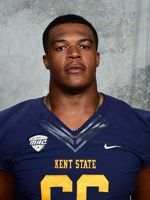 BETTENDORF — Anthony Pruitt and his Quad City Steamwheelers experienced the agony of defeat and the thrill of victory all in the matter of three overtime plays last weekend.

From a game-tying touchdown reception overturned by a replay challenge on second down, to the finishing touches of a game-winning, goal-line stand by Pruitt's defense, the local Indoor Football League team rode an emotional rollercoaster its nose guard should avoid in real life.

"But being in that atmosphere and being on the football field actually makes me feel better," said Pruitt, who battles Bipolar I, a mental disorder marked by the highest of manic highs to the lowest of depressive lows.

More than 10 million Americans suffer from some form of Bipolar, with the version affecting Pruitt leading to risky behavior and even suicidal tendencies if not treated, according to webmd.com.

Pruitt was diagnosed last summer after the 'Wheelers first season since 2009, discovering at the same time other family members have struggled with mental illness.

The Ohio native said he even suffered a manic episode at midseason, which forced Pruitt on the Injured Reserve list to seek treatment. Doctors still are adjusting his doses of the anti-depressent Abilify, which Pruitt says helps him focus and eliminate mood swings.

"It was something I had to deal with, but I was so eager to get back," said Pruitt, who missed three games from mid-April to early May, with the 'Wheelers losing twice, including a trip to tonight's foe, Bismarck.

"Watching those three games just about killed me. I could see we needed a bigger guy at nose guard to play the two-gap, and take away the quarterback from running the ball.

"So I was down and really couldn't get back up until I got back here. It took awhile to get adjusted (to the medicine). But now I know, when I begin to feel a little more depressed, that tells me it's time to get another shot and get me back to level."

Pruitt realizes his chosen profession can seem to make his malady more of a challenge. Last weekend offered a perfect example.

"I messed up and got us a field goal blocked," said Pruitt, who missed blocking a rival defender on special teams. "So when they hit that pass in overtime, I was like, 'I lost us this game!'

"So it was a relief when they ruled thay wasn't a catch. I knew from there we were going to stop them."

Pruitt and his teammates turned the league's leading running attack into a throwing team late, with the nose guard stopping the only rush attempt on the goal-line stand, a first down carry by IFL leader and Nebraska quarterback Tommy Armstrong,

"It's easy to ride the highs and lows of this game," he said. "You get up to play. Good things happen, bad things happen. I just try and stay focused on my job so I don't ride a rollercoaster.

"My go-to is football, though. Once I'm starting to feel down, before I don't want to do anything, I just think about what I have to do or I go workout. That helps a lot.

"So I really couldn't do it without the help of my coaches, and the support of my teammates and this organization, though. Without this team, I don't know what I would do."

Pruitt nearly had to find out, though.

A two-way backup on the line last season, Pruitt only signed days before training camp in February to add competitive depth when a couple of high-profile preseason signings failed to show.

However, Pruitt pleasantly surprised coaches by arriving in game shape from the start, intent on winning the starting spot at nose guard.

"I'm a team guy, so I'll do whatever I can do for my guys, and last year that meant filling a lot of holes. But I love playing defense, so I wanted to prove I could play a bigger role this season."

Countless offseason hours paid off in a better Pruitt, both in terms of body and mind. Now, he only wants the chance to keep climbing the ladder.

"I feel like I need to have a better season to make it to the next level, whether that's CFL or XFL," Pruitt said. "So I still want to come back and play for the Steamwheelers next season.

"I plan on moving here after the season and hope to help one of the high schools out coaching the offensive or defensive line. I also want to reach out to local kids so I can help train them.

"I've made something out of nothing. I came from nowhere to get to somewhere, so I just want to help athletes who have been in the same position as me get to where they want to go."