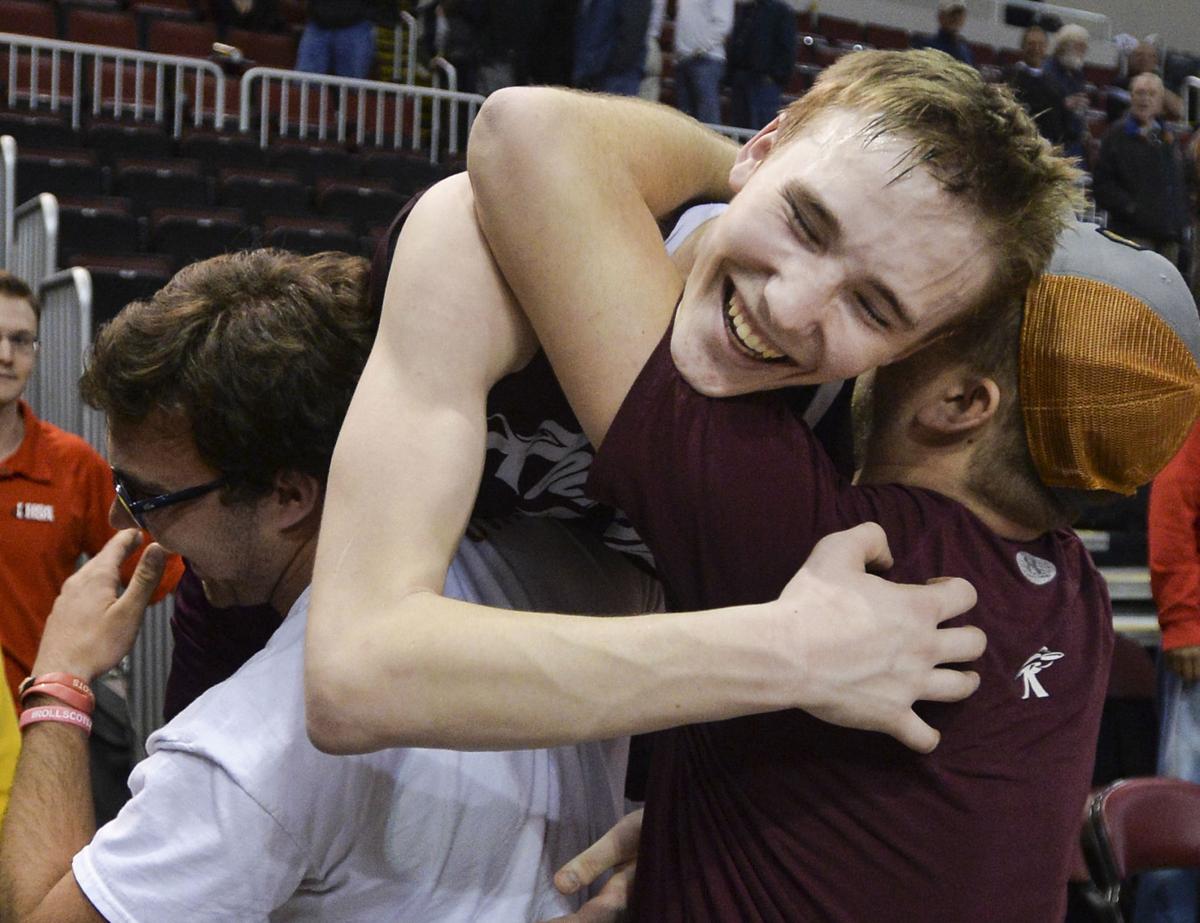 Fans lift Rockridge's Carson Frakes after he made a ¾-court shot at the buzzer to beat Chicago Hales Franciscan, 45-43, during a 2016 IHSA Class 2A state semifinal in Peoria, Ill. The state tournament will be leaving Peoria to head back to Champaign. 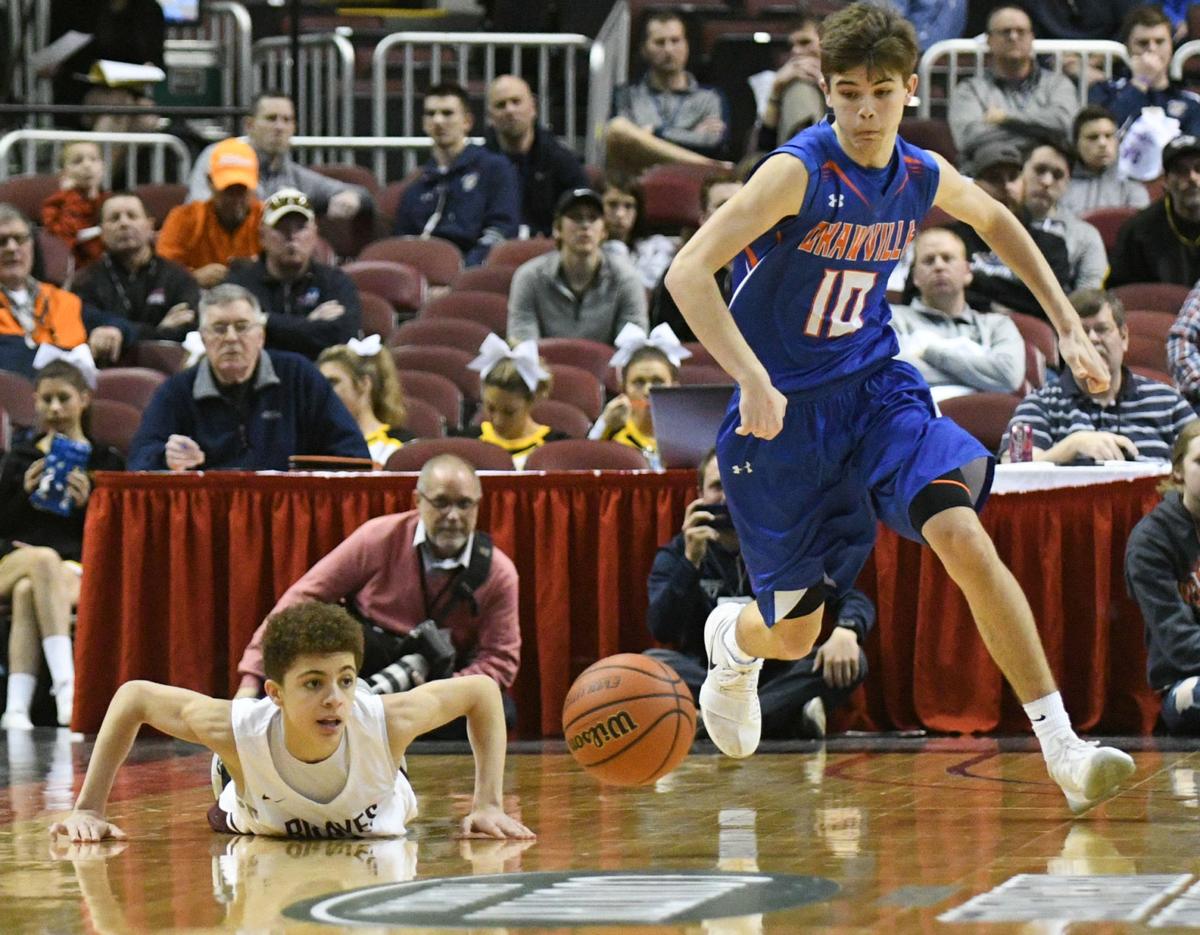 Annawan's Julian Samuels, left, and Okawville's Will Aubel chase after a loose ball during the 2018 Class 1A state championship game at the Peoria Civic Center.

For a trio of Quad-City area boys basketball coaches, there will always be fond memories of the IHSA state tournament's 25-year run in Peoria.

Rock Island's Thom Sigel, Annawan's Alex Coppejans and Rockridge's Andy Saey all had the opportunity to experience March Madness along the banks of the Illinois River on multiple occasions.

For Sigel, memories of the atmosphere at the Peoria Civic Center's Carver Arena are especially pleasant. It is where he coached both Rock Falls (in 1999) and Rock Island (2011) to state championships; he also guided the Rockets to the Class A state quarterfinals in 2000.

"There's some great memories there," said Sigel. "Peoria is such a good basketball town. They welcomed (the state tournament) with open arms and treated all of us well."

But after calling Peoria home since the 1995-96 season, the state tournament is returning to Champaign, which hosted the event from 1919 to 1995.

"Peoria did a good job of generating a lot of excitement for the tournament," Sigel said. "They added the (March Madness) experience to it, and the proximity of everything downtown, staying at the Pere Marquette and walking there, it was something special."

However, Sigel admitted it was difficult at first to see the tournament moved from Champaign, where it was contested on the University of Illinois campus first at Kenney Gym from 1919 to '25, then at Huff Gym from 1926 to '62 before it moved to the then-new Assembly Hall (now the State Farm Center).

"It was hard to see it move from Champaign, with all the tradition there," he said. "(The Rocks) have been fortunate to play in a shootout there in 2009 and ’10. Even then, with only a few thousand fans, coming out of that tunnel was great. Now doing that at state, that'd be quite an experience."

Coppejans got to enjoy the Peoria state experience both as a player in 2009, when he led Annawan to a fourth-place finish in Class 1A, and again as the Braves' head coach in 2018, when they finished as the 1A runner-up.

His experiences from those two Final Four runs has him viewing the move back to Champaign with mixed emotions.

"I had mixed feelings when I first heard that the IHSA was thinking about making a change, and when it finally came through," Coppejans said. "It's sad to see it go; I've got great memories and had great experiences both times I was there. Anything we needed, they were more than ready to help us out. From my experience, they were tremendous hosts in Peoria. It's sad to see it leave that arena.

"At the same time, it's not a bad thing that it's moving back to Champaign. It's a great opportunity to showcase the University of Illinois and to hopefully get more kids interested in going there. I'll certainly miss going to Carver Arena or seeing it on my TV screen, but it was the right time for a change."

Saey got to make back-to-back trips to downtown Peoria as an assistant on Toby Whiteman's Rockridge staff, with the Rockets taking third in 2A in 2015 and then finishing as the state runner-up the following March.

"There's nothing wrong with a change. I think it'll breathe some life into the tourney, and everyone loves going to Champaign and to the U of I," he said. "It is obviously bittersweet because I have the memories and the experience of being down there, but I'm excited for the future. I hope we have a chance to get there in the future."

The 2016 Rockridge squad also created one of the most enduring Carver Arena memories, when junior forward Carson Frakes buried a ¾-court shot at the buzzer to top Chicago Hales Franciscan 45-43 in the 2A semifinals.

"That will always be a fixture in our history and at state," said Saey. "That shot, and what it turned into from a social media perspective."

Now, the perspective will be creating new memories at the State Farm Center, which was extensively renovated five years ago. Another change for 2021 will have teams from all four classes competing from March 11-13, with the four championship games on the final day.

From his standpoint, Sigel's main preference is a state tournament that includes him as an active participant.

It's the start of a new month. Here's hoping it is better than the past few. Hot and humid conditions will usher in July. Here are the weather…

Fans lift Rockridge's Carson Frakes after he made a ¾-court shot at the buzzer to beat Chicago Hales Franciscan, 45-43, during a 2016 IHSA Class 2A state semifinal in Peoria, Ill. The state tournament will be leaving Peoria to head back to Champaign.

Annawan's Julian Samuels, left, and Okawville's Will Aubel chase after a loose ball during the 2018 Class 1A state championship game at the Peoria Civic Center.