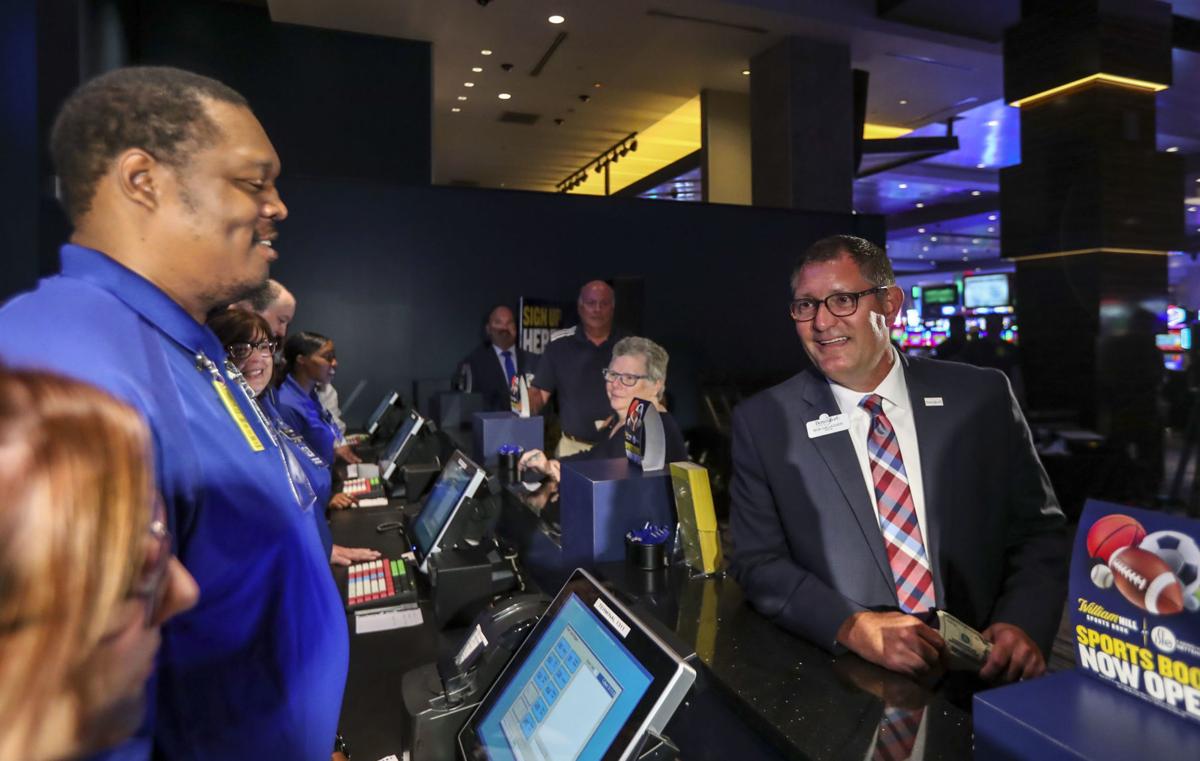 Bettendorf Mayor Bob Gallagher approaches the counter to place the ceremonial first bet at the Isle Casino in Bettendorf on Thursday, Aug. 15. William Hill Sports Book opened for business at the Casino and accepted the first legal sports bets from the mayor shortly after noon to mark the first day of legal sports wagering in the state. 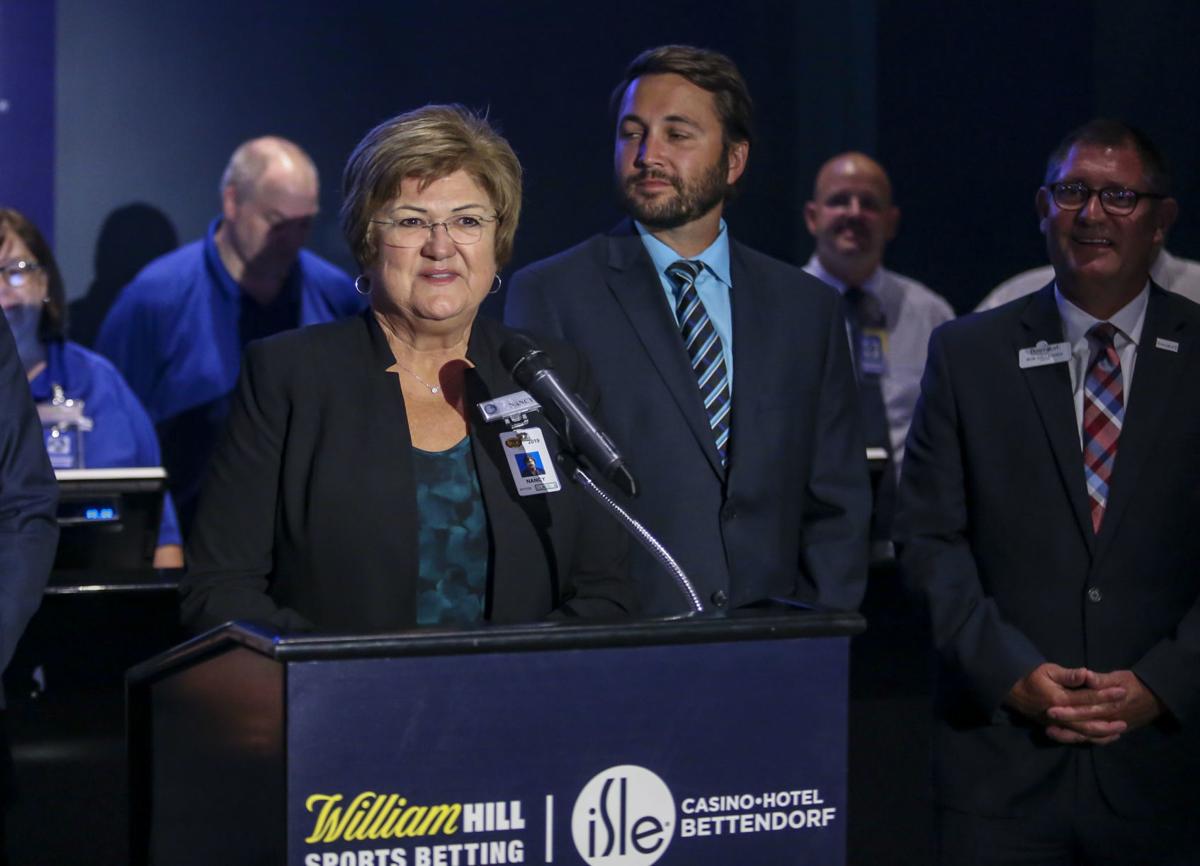 Tim and Georgia Lightner arrived at about 10 a.m.

The Bettendorf couple knew that sports wagering in Iowa didn’t become legal until noon Thursday, but they had to come over to the Isle Casino Hotel just to take in the scene and revel in the occasion.

“He’s been waiting for this,’’ Georgia said, pointing to her husband of nearly 55 years. “When they first started talking about passing this in the state of Iowa, he was sitting there rubbing his hands together. When they finally gave a date, he was just so excited.’’

The Lightners were among many local residents who were at the Isle on Thursday to celebrate and participate in the opening of legalized sports gambling in the state.

Iowa is the 11th state in the country to legalize sports gambling, the first in the upper Midwest.

The Isle, which has signed a 25-year contract with William Hill Sports Book, was one of six casinos across the state approved to offer wagering on sports events prior to Thursday although almost all of the 19 casinos in the state are expected to become involved eventually.

Rhythm City Casino in Davenport received final approval just before noon and also began offering sports wagering through Elite Sportsbook in its Draft Day Sports Lounge and at kiosks throughout the facility.

General manager Mo Hyder said the main thing was to be ready prior to the start of the college and professional football seasons, which get under way a few weeks from now.

“I think that’s why everyone wasn’t in a big hurry,’’ Hyder said.

He said the casino wanted to make sure everything was in place before holding any formal ceremonies to open the facility.

The Isle facility held a ribbon-cutting Thursday with ceremonies that included comments from representative Bobby Kaufman, R-Wilton, one of the legislators behind the legalization bill; Isle vice president and general manager Nancy Ballenger; Bettendorf mayor Robert Gallagher; and Michael Grodsky, vice president of marketing and public relations for William Hill.

Grodsky has made multiple trips to Iowa to prepare the Isle operation and other William Hill outlets in Waterloo, Osceola and Altoona, and said he thinks sports betting will be huge here.

“There’s a different energy around sports here just following their favorite teams,’’ he said. “We’re really excited to help new bettors who maybe have never wagered before to understand the different ways they can bet on their teams or take the sports knowledge they have from watching a lot of teams and take advantage of that.’’

After the formal ribbon-cutting, Gallagher was given the honor of making the ceremonial first bet. The mayor, who served as the Herky the Hawk mascot during his undergraduate days at the University of Iowa, started by placing a bet that the Hawkeyes would win more than 7.5 games this season. He also picked Miami of Ohio to cover the 21.5-point spread in its August 31 season opener against Iowa, pointing out that his son Jack attends Iowa while his daughter Ally is a junior at Miami.

Other celebrity bettors included longtime Bettendorf resident Christine Sampson, who placed two $100 bets on the Los Angeles Dodgers, and former sports anchor Thom Cornelis, who bet $10 that the Cubs would lose to the Philadelphia Phillies on Thursday night and also placed a $5.50 wager on behalf of state senator Roby Smith, R-Davenport, that Iowa would beat the spread against Miami.

Then the doors swung open for the Lightners and other local citizens to place their bets.

Rock Island resident Dale Hansen came across the border to make wagers on five different season-opening NFL games and admitted he probably would be a frequent visitor to the Isle.

Davenport's Paul Bronzino also placed a couple of NFL-related wagers, betting that the Arizona Cardinals would win more than five games and that the San Francisco 49ers would win fewer than 10.

Bronzino, who wore a shirt that said “Lucky," said he thinks the legalization of sports betting here is a fantastic move.

“This is great, great for the economy and for the community,’’ Bronzino said. “Instead of sitting home watching the game, you can come here and watch and bet and maybe win.’’

Georgia Lightner said it also is a boon to the family’s budget. She and her husband typically make three or four trips to Las Vegas each year. Now they don’t need to.

Tim Lightner, who wore a Chicago Bears shirt and whose first move was to bet the over on the Bears winning 9.5 games this season, said it would be nice to just drive down the street to collect his winnings rather than sending his winning tickets via certified mail.

“We might as well give them our money here instead of going out to Vegas,’’ he said. “Keep it in the community.’’

CHAMPAIGN — The local area will have a lot to cheer for on Saturday evening as four wrestlers will compete for Class 1A titles at the IHSA State Wrestling Championship, including three back-to-back-to-back matches at the State Farm Center.

In a matchup of two state-ranked basketball teams in Class 3A, Galesburg often looked like it could score at will against the Rock Island Rocks in their Western Big 6 Conference battle at Rock Island Fieldhouse on Friday night.

MENDOTA — Going up against a nine-win Woodstock Marian squad in Tuesday's Class 2A Mendota Sectional semifinals, the Riverdale girls basketbal…

CHAMPAIGN — It’s difficult to encapsulate an entire season of hard work, sweat and dedication into one phrase, but for the Rockridge senior duo of Dallas Krueger and Nolan Throne, it can be boiled down to one word.

Hannah Simmer was a role player her first two seasons as a varsity basketball player for Rock Island.

Alleman's Taylor finds his way back to state

Alleman wrestling standout Billy Taylor got his prep career off on the right foot when he qualified for the Class 1A state tournament as a freshman 113-pounder.

Boys basketball title on the line in regular-season finales

Tonight wraps up the regular season for area boys' basketball teams, and for several squads, it is also the opportunity to put the wraps on co…

ROCKFORD — Day 1 of the IHSA state girls bowling meet at The Cherry Bowl concluded with the Rock Island team advancing to the second day for the first time since 2004. The Rocks bowled a 5,636 and sit in seventh place after six games with a 187.9 average game. The Rocks placed seventh as a team in 2004.

Bettendorf Mayor Bob Gallagher approaches the counter to place the ceremonial first bet at the Isle Casino in Bettendorf on Thursday, Aug. 15. William Hill Sports Book opened for business at the Casino and accepted the first legal sports bets from the mayor shortly after noon to mark the first day of legal sports wagering in the state.