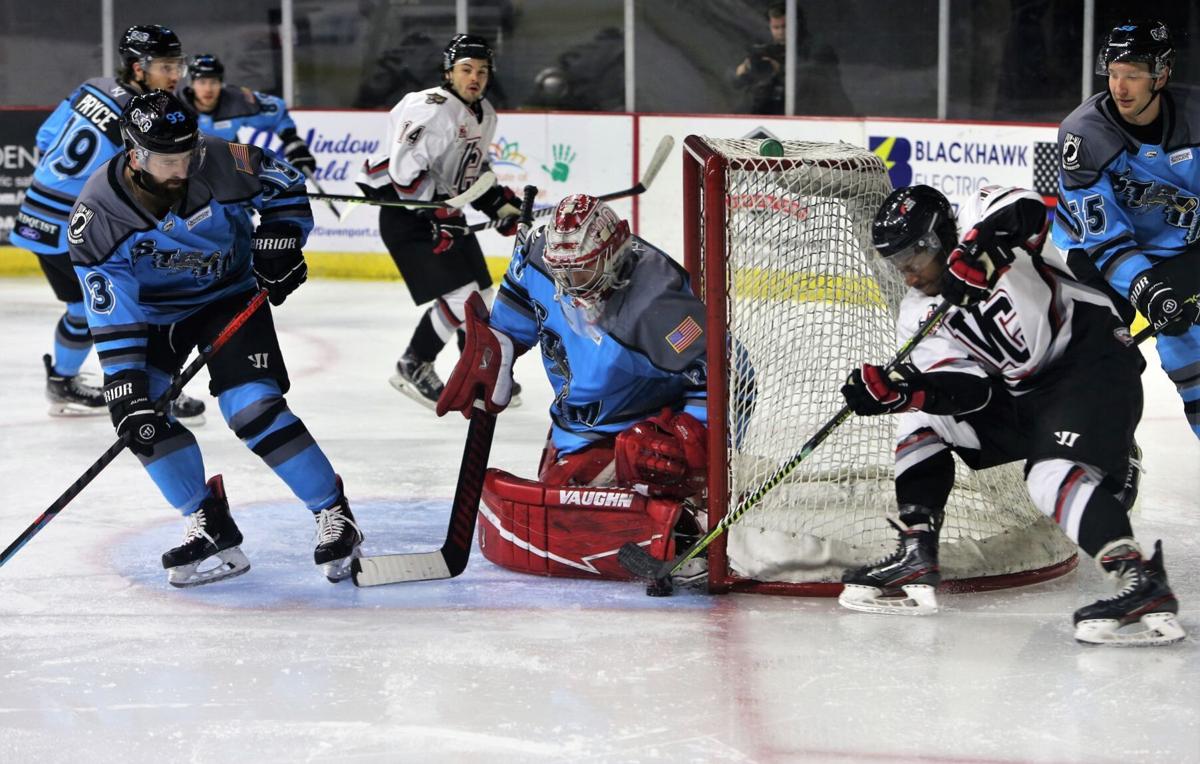 Quad City Storm goaltender Bailey Brkin makes a save against Vermilion County forward Eric Masters during a game Sunday at the TaxSlayer Center. Brkin is 6-0-0 with a 1.51 goals against average to start his career. 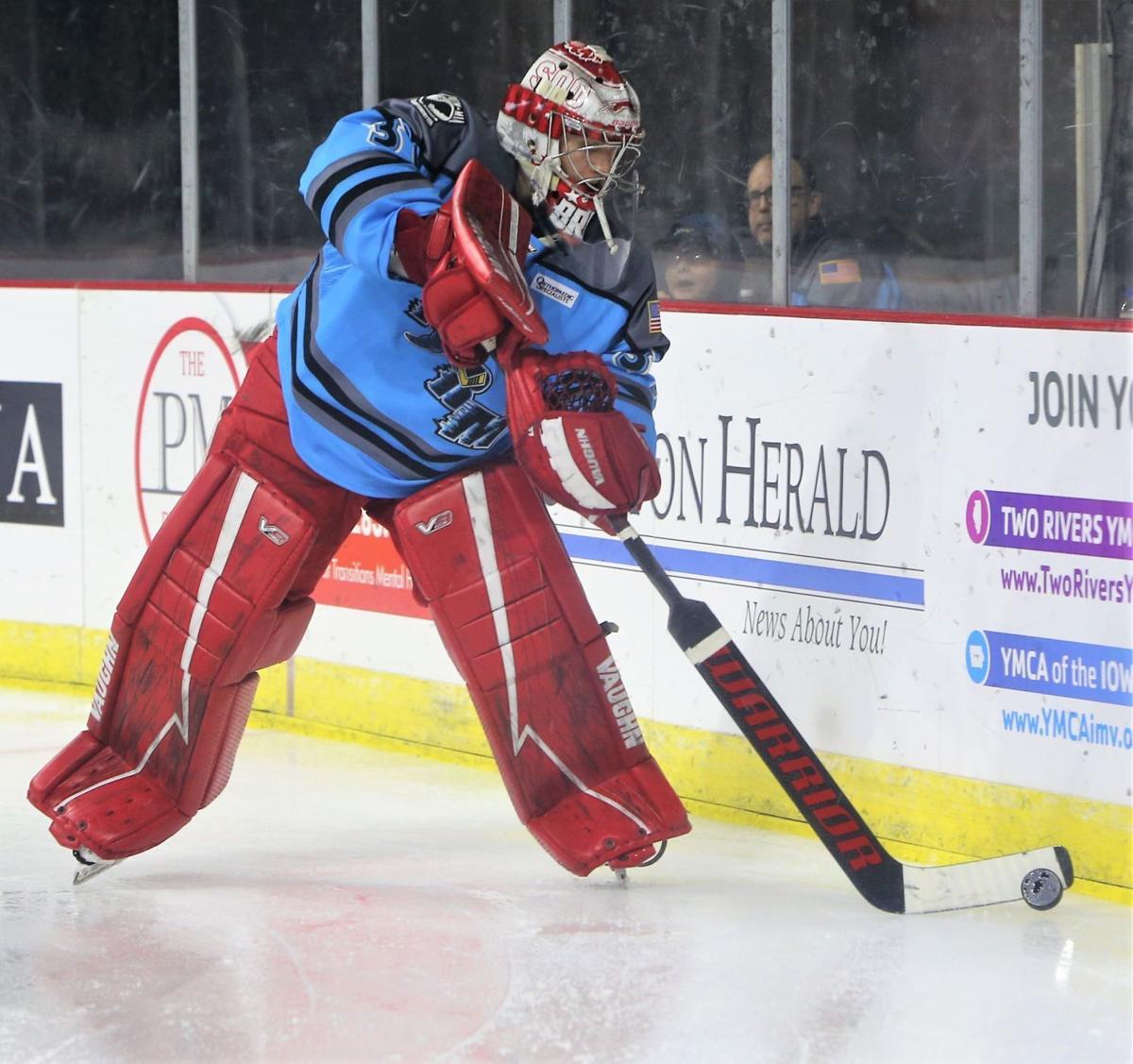 Quad City Storm goaltender Bailey Brkin looks to make a pass during a game against the Vermilion County Bobcats Sunday at the TaxSlayer Center. Brkin is 6-0-0 with a 1.51 goals against average this season.

Bailey Brkin may be young, but he definitely isn't lacking in confidence.

"I know my level of skill that I have," the Storm's 22-year-old rookie goaltender said. "I don't want to sound cocky but I know that if I just come here and do my job, I'll stop every puck that I see."

So far, Brkin has basically done just that. He is 6-0-0 to start his professional career, a big part of the Storm's eight-game winning streak that will be put on the line Thursday against the Birmingham Bulls.

Brkin is tied for third in the league in wins and is second with a 1.51 goals against average. He has allowed nine goals on 173 shots, a .948 save percentage, one point behind league leader Jason Pawloski of Fayetteville.

"It's a bunch of fun," Brkin said. "It's never a bad thing when you start winning a bunch of games."

Brkin hadn't played professionally before joining the Storm. In fact, he hadn't played since 2020, a freshman season with Ryerson University in Toronto nixed last year because of COVID-19.

Prior to that, he had played junior hockey, mainly in the Western Hockey League and the Ontario Hockey League. He was a combined 61-40-9 between those two leagues with a 3.39 goals against average.

That put him on the radar of Storm assistant coach Jake Toporowski, whose brother, Luke, played with Brkin that season.

Deciding to turn pro this year, Brkin was signed to the Storm's training camp roster as the third goaltender behind Peter Di Salvo and fellow rookie Bailey MacBurnie.

He didn't officially join the team until Oct. 19 but made a quick impression, making 28 saves in his debut, a 6-1 win over Evansville that kicked off the winning streak. The Storm waived MacBurnie a week later and haven't looked back.

"Not to say we weren't confident in our goaltenders coming in that we had signed and protected, but at the end of the day ... when you hear word of mouth through people, this kid just needs some playing time, obviously he does," head coach Dave Pszenyczny said. "I don't know how long we'll have him.

"He's doing everything he can to get himself to the next level, it's just a matter of timing probably at this point."

Despite a year away, and a different level of hockey, Brkin expected he would make a quick impact, and is proving it early with the Storm.

"I think I was always there, even last year, just because of COVID, didn't get the opportunity to play but I feel like I've always been ready to play pro hockey," Brkin said. "Just, working with my goalie coach all summer really was it, doing the right things, focusing on my body and just fine-tuning my game.

"It feels nice to just play games after 15 months. It feels even better to get wins."

Heading into the season it looked like the Storm would rely on Di Salvo, the SPHL's career wins leader. However, Brkin has carried the load, and Di Salvo is 2-1-0 with a 3.20 goals against average for the Storm.

Though Di Salvo isn't currently the workhorse many may have suspected, Pszenyzcny hasn't seen any negative energy from the veteran, allowing the rookie to settle in and play his game. Instead, it's only pushing Di Salvo to up his game, ready for the next opportunity, which Pszenyczny said will be in Thursday's game against the Bulls.

"I really think it has to do with what's going on in that room and how tight they are and they just want the team to succeed at the end of the night," Pszenyczny said. "It's a next man up mentality. It's not my fault or his fault we can only play one goalie each night. Most of the time, you just go with who's hot and if it ain't broke, don't fix it. Pete's been really wonderful through all this, it's bringing out the best of him in practice so now we know when he gets his next start, he'll be ready to go."

Scully played one game with the Storm in the team's 4-1 win over Evansville Saturday.

Koepplinger has scored three goals and added three assists in seven games with the Storm.

On Friday, overtime was kind to Quad City as the Storm outlasted Pensacola to extend the franchise's longest win streak to 10 games.

Quad City Storm goaltender Bailey Brkin makes a save against Vermilion County forward Eric Masters during a game Sunday at the TaxSlayer Center. Brkin is 6-0-0 with a 1.51 goals against average to start his career.

Quad City Storm goaltender Bailey Brkin looks to make a pass during a game against the Vermilion County Bobcats Sunday at the TaxSlayer Center. Brkin is 6-0-0 with a 1.51 goals against average this season.