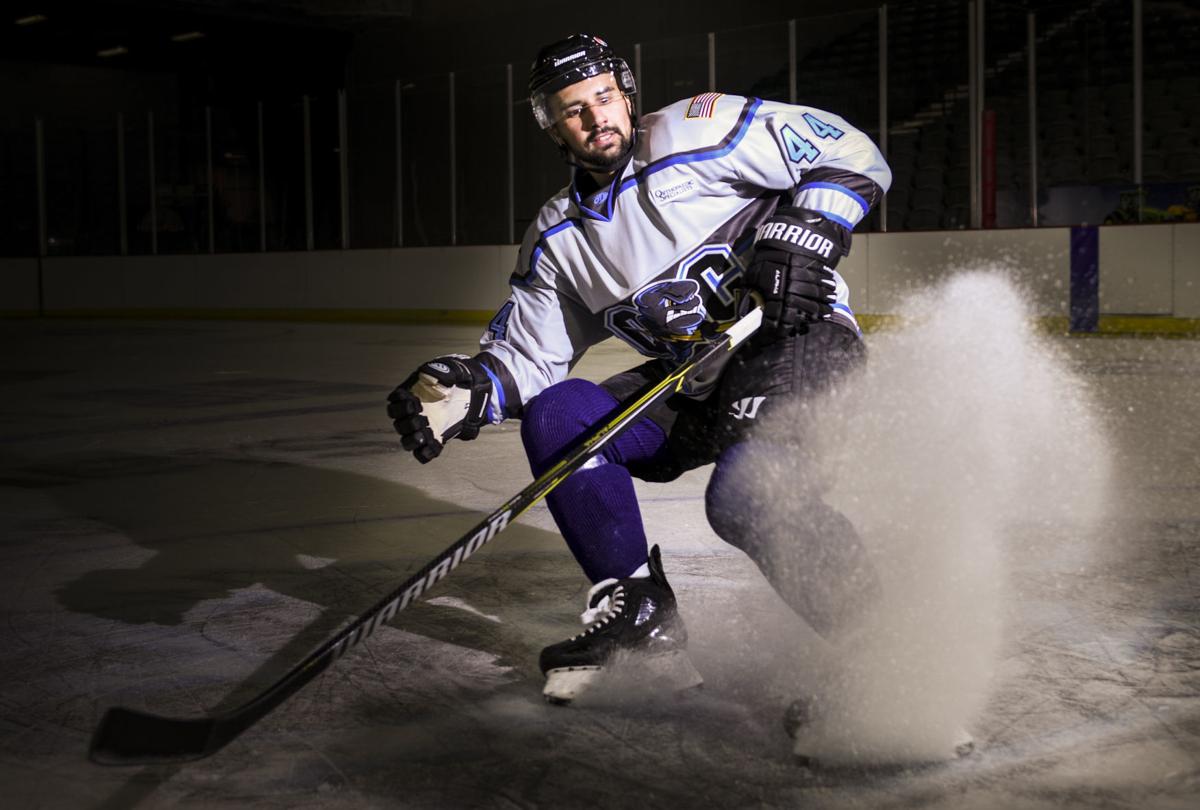 The Quad-City Storm's John Schiavo poses for a portrait at the TaxSlayer Center last week. Schiavo faces his former team, the Huntsville Havoc, Friday in the Storm's home opener. 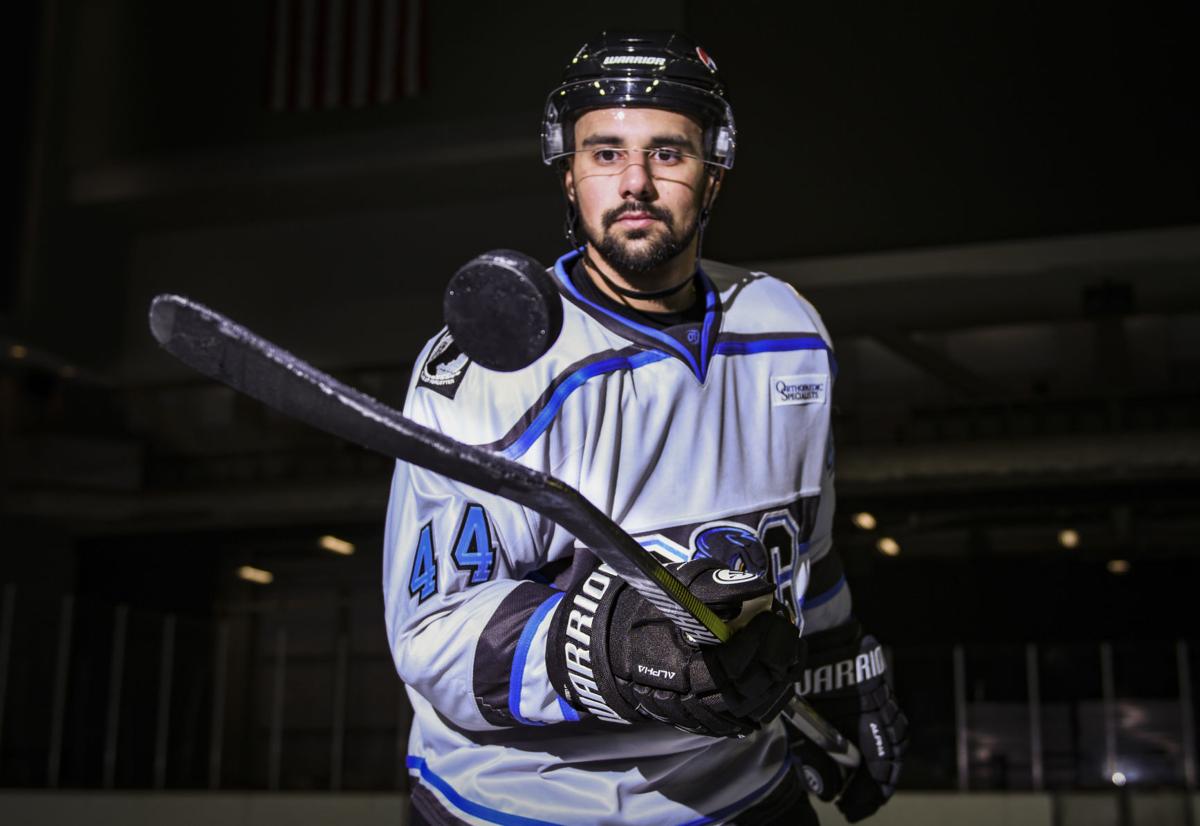 The Quad-City Storm's John Schiavo will face against some familiar faces Friday when the Huntsville Havoc come to the TaxSlayer Center.

After taking Peoria to overtime in last week's season opener, the Quad-City Storm get quite the challenge for their home opener.

The Storm welcome two-time defending Southern Professional Hockey League champion Huntsville Havoc for a two-game set this weekend at the TaxSlayer Center, another opportunity for the Storm to see where they stand in this season's infancy.

"It’s going to be a good matchup for us and a good measuring stick," Storm head coach Dave Pszenyczny said. "They were the best team in the league last year, and that’s where we want to be at the end of the year as well.

"In front of a big crowd, I think the boys will be amped up for it, and our mentality right now is we have to score the first goal."

For John Schiavo, it also will be a reunion.

Schiavo played the majority of last season with the Havoc and was part of the celebration after Huntsville beat Birmingham in the President's Cup Finals. Now, he's getting ready to face off against some familiar faces.

"The first game against them is going to be a little funny, it’s like family now after winning a championship last year. I’m really excited to play them," Schiavo said. "Some big motivation for that game, to prove some points, turn some heads and hopefully get the crowd roaring."

Schiavo, 25, is in his fifth season of a professional hockey career that's included stops in the Federal Hockey League and the ECHL. Last year, the East Patchogue, New York, native played for both the Pensacola Ice Flyers and Evansville Thunderbolts before settling in with Huntsville.

He scored 10 goals and added 13 assists in 42 games and scored a goal and added three assists in six postseason games, which ended with the Havoc lifting the trophy for the second straight season.

"It was an absolute blessing," Schiavo said. "The way we came together in the playoffs and at the end of the season was truly incredible. That’s how you win a championship, that bond in the locker room and with the coaches and everything like that. To come together and push all the way to win that championship was an unbelievable feeling."

After Huntsville chose not to protect his rights, Schiavo decided to look elsewhere to play this season. Despite the Storm's struggles last year, Schiavo felt coming to the Quad-Cities was the right move.

"I thought I worked really hard there, I had great conversations with (Havoc head coach) Glenn Detulleo and, at the end of the day, I think this was a better fit for me," he said. "It was nothing against Huntsville — I loved the fans there, I loved the coaching staff, the team will be family forever to me — but for my personal career and to move up, hopefully to the ECHL in the future, I think coming here was great for my development."

Now, Schiavo is looking to help the Storm reach the same level the Havoc have achieved the past two years.

Although it is very early, he sees some similarities between the Havoc and the Storm in their second season under Pszenyczny.

"Dave is preaching a lot of the same things, which is really good," Schiavo said. "I think that’s how it starts, is from Dave and from the ownership. I think the next step, we’ll see how the fan support is, which I’ve heard is great here and I’m excited to be on this side of it and see it, and then it comes in the locker room.

"If we’re all acting like pros and doing all the right things off the ice, practicing hard during the week, the game should be easy on the weekend and should be a lot of fun."

Schiavo's addition brings another veteran presence to the locker room, one that knows how to win. He was named one of the assistant captains prior to the start of the season and Pszenyczny has seen the growth in his game over the past few years.

"That’s why he wears a letter, because he brings a different element to the game," Pszenyczny said. "He improved last season. I think in his first couple years, he was always a one-dimensional guy, and now he’s bringing a whole, all-around game instead of just scoring points. Once he gets going, it’s going to be deadly."

The addition of players like Schiavo increases expectations for the Storm and also puts some pressure on these new, established veterans to come in and lead the way.

Instead of shying away from expectations, Schiavo welcomes them.

"I don’t think the pressure’s a bad thing, I like the pressure, to be honest," he said. "Coming to a new facility, a new team, a new coach, you want to prove yourself and show how much effort you bring, how much hard work you put in, and it always pays off in the end."

What: Quad-City Storm vs. Huntsville Havoc

The Quad-City Storm received a big boost prior to their home opener, adding forward Joe Widmar to the active roster.

The Storm acquired Widmar's SPHL rights in a trade with the Peoria Rivermen last season. Widmar started the year with the Wichita Thunder in the ECHL before being released Tuesday.

Last year with the Rivermen, Widmar, 24, scored four goals and added 18 assists in 22 games before spending the latter half of the season in the ECHL.

In 51 career SPHL games, Widmar has 15 goals and 47 assists for 62 points. In 57 career ECHL games, the Northbrook, Illinois, native has seven goals and 20 assists.

To make room on the roster, the Storm released forward Paul Fregeau.

Brian Rothenberger started out with the Quad City Storm in 2018 as the team’s radio play-by-play man.

The Quad-City Storm's John Schiavo poses for a portrait at the TaxSlayer Center last week. Schiavo faces his former team, the Huntsville Havoc, Friday in the Storm's home opener.

The Quad-City Storm's John Schiavo will face against some familiar faces Friday when the Huntsville Havoc come to the TaxSlayer Center.