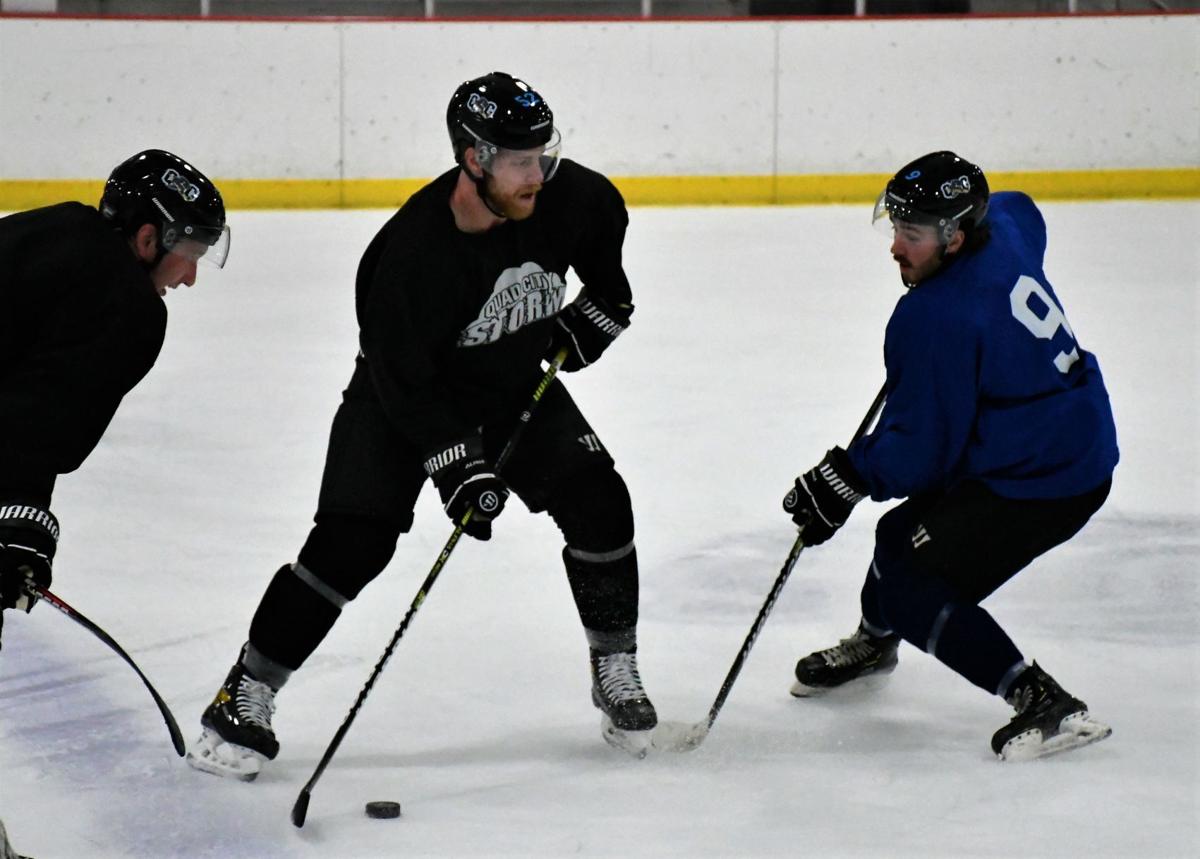 Quad City Storm defenseman Cody Walsh protects the puck from forward Shane Bennett during the first day of training camp Saturday at The River's Edge in Davenport. Walsh and Bennett are both returning players for the Storm. 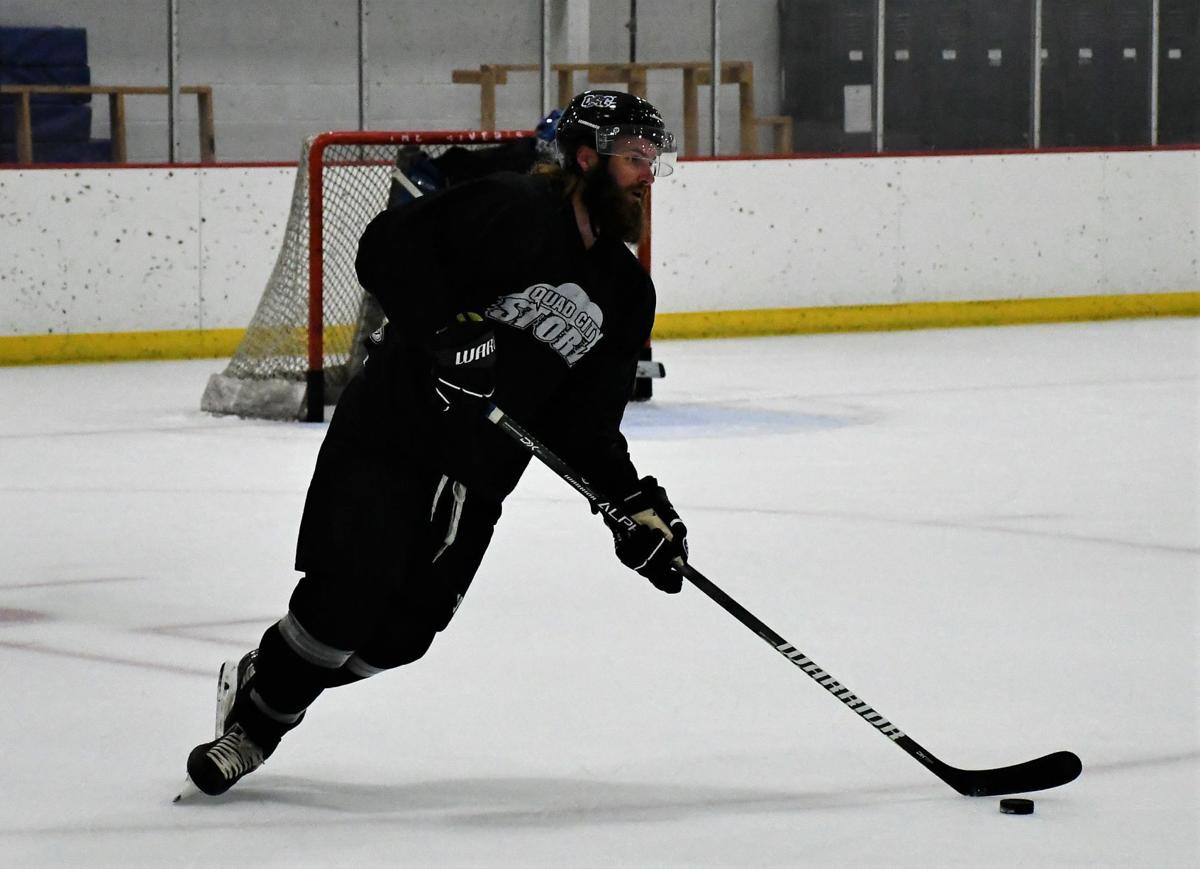 Quad City Storm defenseman Joe Sova brings the puck up the ice during the first day of training camp Saturday at The River's Edge in Davenport. 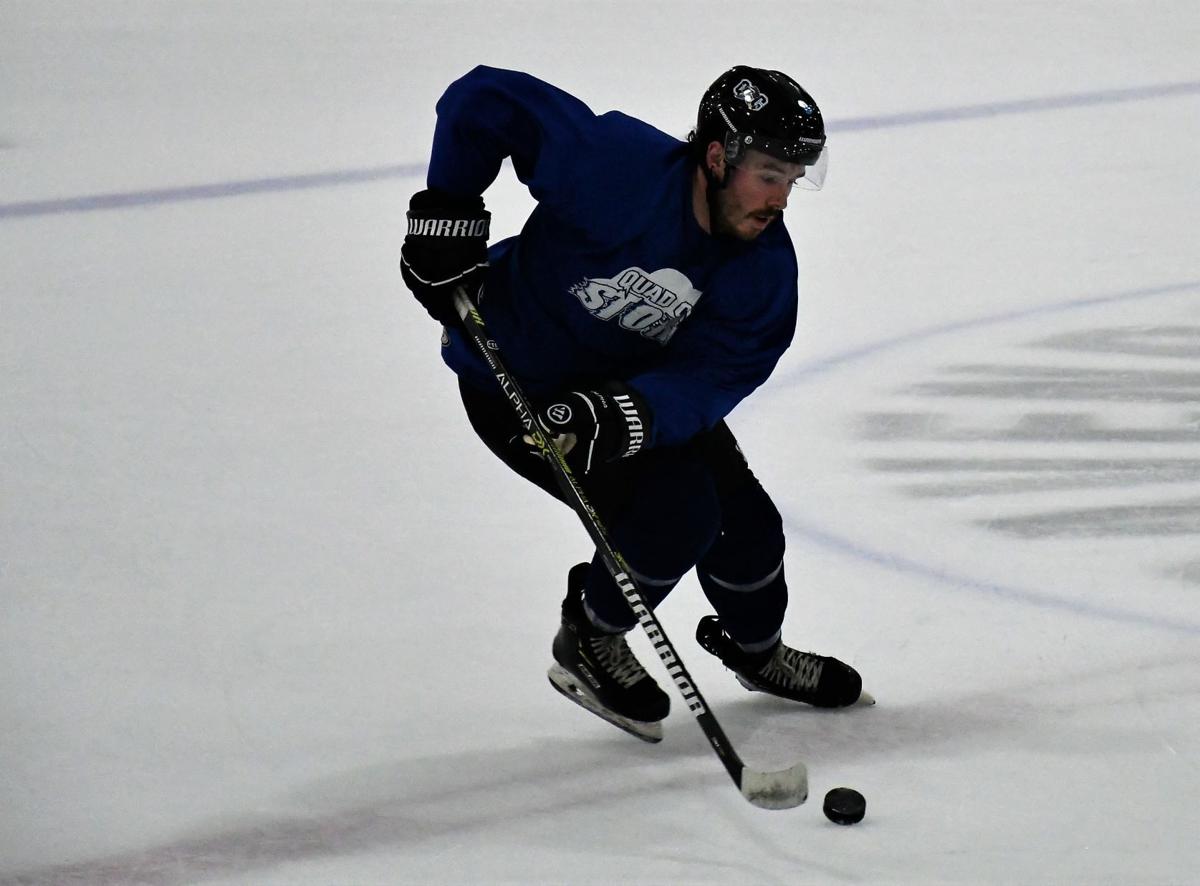 Quad City Storm forward Shane Bennett skates the puck up the ice during the first day of training camp Saturday at The River's Edge in Davenport.

In a never-ending recruiting battle, Quad City Storm head coach Dave Pszenyczny had the deck stacked against him this past offseason.

As COVID-19 kept the Storm off the ice last season, Pszenyczny was left trying to keep players committed to returning this season, and selling the Quad-Cities to new prospective players.

"We were told (late September 2020) we weren't going to go, so you have all those guys you've spoken to and try to keep in the loop ... it's difficult," he said. "What was more difficult was you assemble a team ... all of a sudden we were picked apart.

Despite all that, Pszenyczny, owner John Dawson and the Storm's front office seemingly have built an organization players from around the league want to play for. There are eight returning players from last year on the Storm's roster for Friday's season opener against Evansville.

There are new players — like goaltender Bailey MacBurnie — who were signed to the team for last season that returned this year. There are others who have played for other teams that still found themselves wanting to play for the Storm.

"A lot of the guys I talked to last year, that are all here, we were thinking the same thing, we wanted to come back, we wanted to go to a good spot, a very professional organization and we wanted the chance to win a championship with a good group of guys," forward Marcus Ortiz said. "We all kind of, on our own, chose Quad City."

Ortiz — who is entering his fifth pro season — has been on Pszenyczny's radar since he took the reins of the Storm but was never able to pull off a trade to land him. This offseason, with Ortiz available, Pszenyczny made a push, and Ortiz was on board.

"In all of our conversations, we didn't really talk about me coming here, we talked about how the team should play, what kind of style we should play and it never really was a choice. It was almost like, I want to be here," Ortiz said. "I've always heard good things about the cities and the facility speaks for itself, it's an American League quality rink, if not higher and I wanted to go somewhere where things are professional."

While able to attract new players, the Storm have also built something players want to keep coming back to. Four players on the team's roster have played more than 60 games for the Storm — Tommy Tsicos, Cody Walsh, Shane Bennett and Peter Di Salvo.

"This is the only place I wanted to come back to play," Bennett said. "If I'm playing somewhere, it's going to be here. The fans are great, they treat us well here, a nice rink, facilities, everything. It was kind of an easy choice."

While the Storm may be an attractive landing spot, the fact remains the team has yet to make the playoffs in its first two seasons, though was in possession of a playoff spot when the season was halted in 2020.

While that might deter players from joining the team, those around the league recognize that early lack of success might have more to do with the schedule the Storm play than anything else. The Storm have had to play the regular-season champion Peoria Rivermen 26 times in their first two seasons, more than a quarter of their total games against the league in that span.

"Let's call a spade a spade, I think if everybody played everybody else an equal amount of times, I think Quad City would have had a more than plentiful chance of being in the playoffs almost every year," Ortiz said. "It's just kind of the ebbs and flows of things. I think, this year, with having the year off, Dave was able to build a team he really wanted to and a team that can compete with Peoria, Evansville, (Vermilion County), 16, 15 times each."

The Storm face the Rivermen 16 times this season, but, if anything, the team believes it is better equipped now to contend with the Rivermen than ever before.

"Going from our inaugural season to Year 2, I think we closed that gap pretty quick," Pszenyczny said. "When you're playing the top teams in the league, week in and week out, it's a nice measuring stick to see where you stand with the rest of the league. ... I would like a balanced schedule but that's not in the cards so I'm not going to use that as a crutch or an excuse."

The Storm also named defenseman Joe Sova an assistant captain, and forward Marcus Ortiz will also wear the 'A' at home games. Head coach Dave Pszenyczny said the second 'A' will move around at away games.

EVANSVILLE — The Quad City Storm wasted no time in ensuring that they would finish Friday night's game against the Evansville Thunderbolts with their first win of the season.

The Quad City Storm’s team bus rolled into the parking lot at the TaxSlayer Center shortly before 6 a.m. Saturday following a game at Evansville on Friday night.

'I found a new home here': Di Salvo looking to make final season a banner one with Storm

The Quad City Storm and Di Salvo — the SPHL's career wins leader — open the season Friday against the Evansville Thunderbolts.

The Storm committed nine penalties in a season-opening loss to the Evansville Thunderbolts.

Quad City Storm defenseman Cody Walsh protects the puck from forward Shane Bennett during the first day of training camp Saturday at The River's Edge in Davenport. Walsh and Bennett are both returning players for the Storm.

Quad City Storm defenseman Joe Sova brings the puck up the ice during the first day of training camp Saturday at The River's Edge in Davenport.

Quad City Storm forward Shane Bennett skates the puck up the ice during the first day of training camp Saturday at The River's Edge in Davenport.