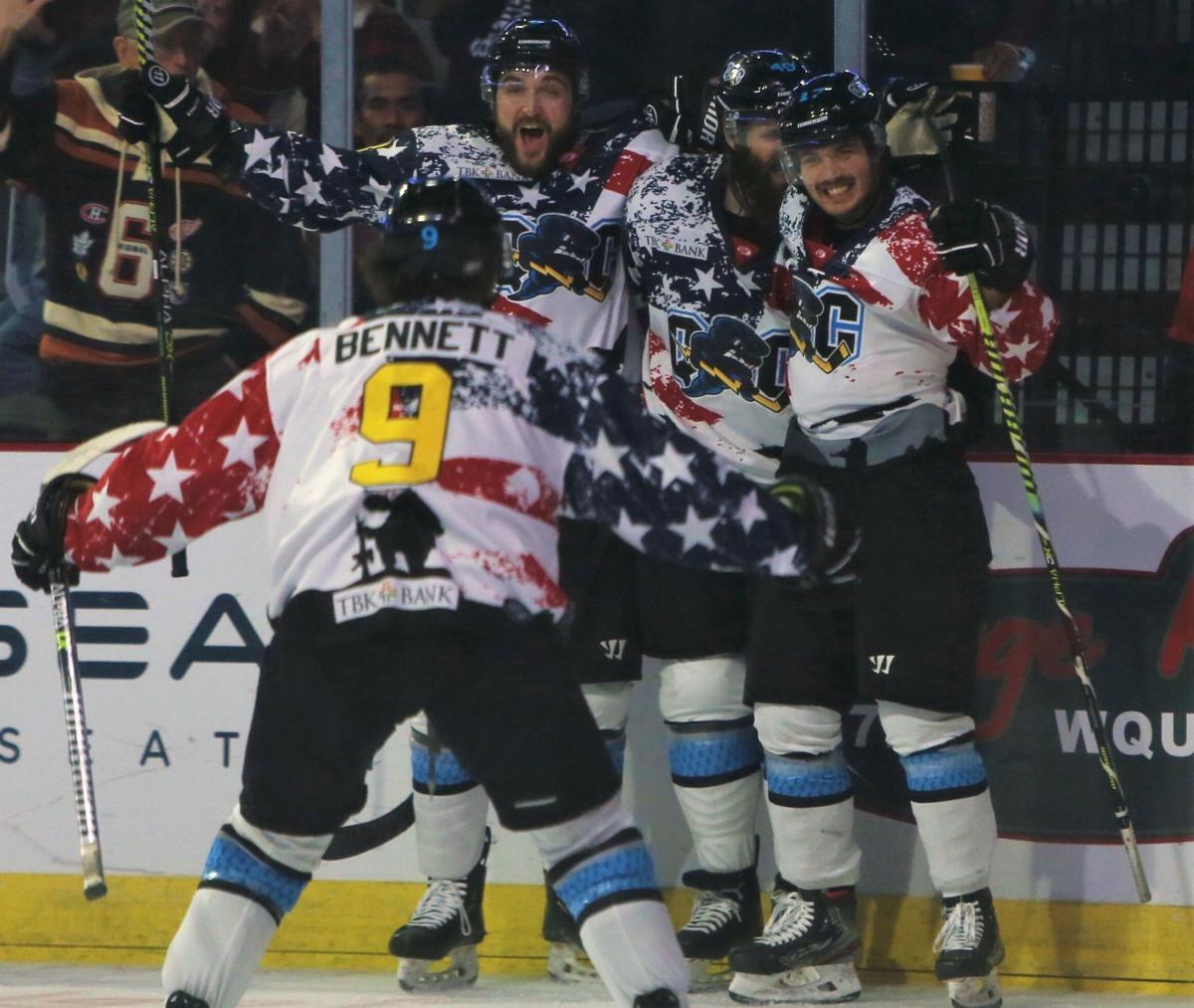 Quad City Storm players gather to celebrate a goal by Filip Virgili during a game against the Evansville Thunderbolts Saturday at the TaxSlayer Center. 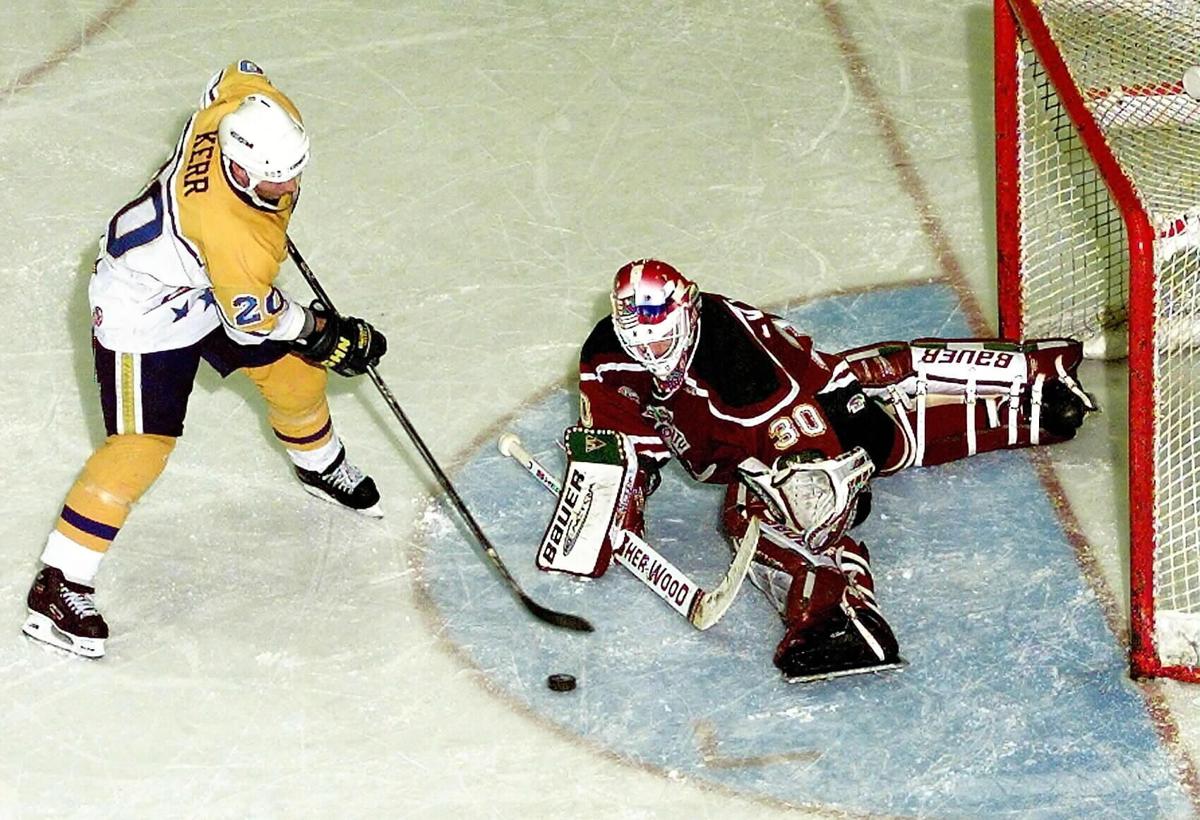 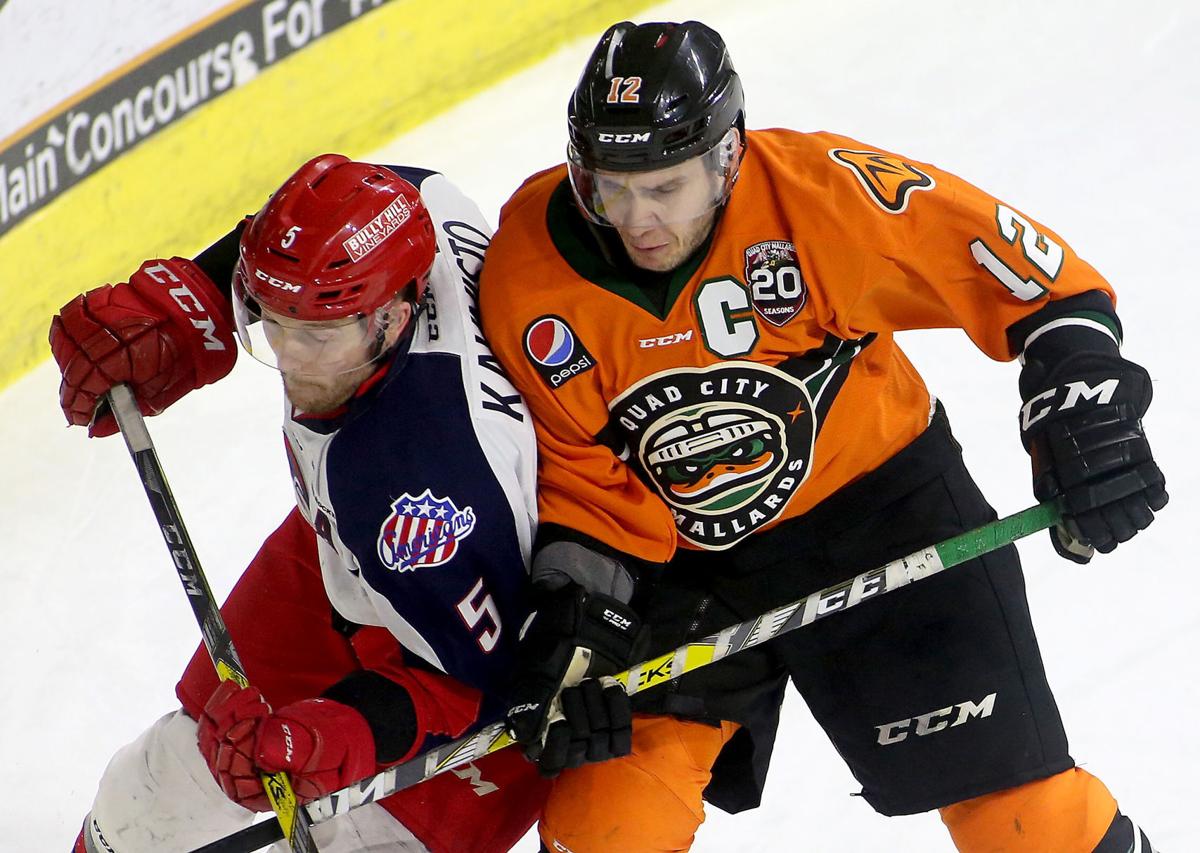 Chris Francis scored seven goals and added seven assists to lead the Quad City Mallards in scoring during an 8-game winning streak in 2017.

The Quad City Storm have won eight straight games, the second-longest streak this season in the SPHL behind the Huntsville Havoc, who have won 11 straight to start the season.

The winning streak is already the franchise benchmark for the Storm in their third season and is the best streak in Quad-City hockey history since 2017. The Storm have moved into second place in the SPHL standings.

The team has a chance to stretch its streak to nine games on the road Thursday against the Birmingham Bulls.

"It's never about one player. The chain is as weak as the weakest part and we have guys that can step up to the game as needed. We're all pulling the same rope and it works," defenseman David Brancik said. "Our forwards do an outstanding job on the forecheck and that allows the D to step up and maybe pinch at the blue line and that saves us a lot of energy because we don't have to skate down and back."

Here are other notable winning streaks in Quad-City hockey history:

The streak: Mallards opened the season with 12 wins in a row — something that hasn't been done in the NHL, AHL (though the Utica Comets have started this year 10-0-0) or ECHL — starting with a 5-2 win over Thunder Bay on Oct. 17 and lasting until Nov. 15 with a 6-0 loss to Flint.

By the numbers: Mallards outscored opponents 71-28 during streak.

End game: The streak, one of two double-digit winning streaks during the season, propelled Mallards to a 55-18-1 mark, a division title and a run to their second straight Colonial Cup. The streak was in Paul Gillis' first year as Mallards head coach.

By the numbers: The Mallards outscored opponents 68-23 in those 11 games, scoring five or more goals six times and posting one shutout.

End game: Despite having three of their top players up in the AHL for a time and losing rookie Peter Armbrust during the streak to an injury, the Mallards finished the season 55-12-7, their best season in terms of winning percentage, capturing the Southwest Division and grabbing their third Colonial Cup in the process.

The streak: Two separate 10-game winning streaks for the Mallards, starting with a 4-1 win on Nov. 14 over Rockford and lasting until a 6-2 loss to Fort Wayne on Dec. 7. After the new year, the Mallards got right back on track, beating Missouri 6-1 on Jan. 11 and winning their next 10 until a 4-2 loss to Kalamazoo on Feb. 2. The Mallards also won nine straight games later in the season.

By the numbers: The Mallards outscored opponents 43-16 and 40-15 over the two streaks.

Top performances: Chad Power and Brendan Brooks each scored six goals during the first streak. The Mallards brought back Hugo Proulx and acquired Jesse Rooney from Rockford prior to their second streak and the duo combined for 13 goals. Goaltender Joe Dimaline recorded the 10th and 11th shutouts of his career during the streaks.

End game: The Mallards posted their most wins in a season, going 57-15-2 and winning the Western Division but lost in the second round of the Colonial Cup playoffs.

By the numbers: The Mallards outscored opponents 44-27 during the streak. Five times the team scored at least five goals.

The streak: The run started after the Mallards made a coaching change, firing Terry Ruskowski and promoting Phil Axtell from his assistant's role. After a 2-2 start under Axtell, the Mallards started the streak on Jan. 28 with a 7-2 win over Indy, and it ran until a 2-1 loss to Cincinnati on Feb. 17.

By the numbers: Mallards outscored opponents 37-18 during stretch and scored five goals or more four times.

End game: The streak catapulted the Mallards to a 40-28-4 season, their first 40-win season since 2006, and a third-place finish in the Central Division of the ECHL. The Mallards lost in the first round of the playoffs to Fort Wayne in five games.

By the numbers: Mallards outscored opponents 50-31 during the stretch, including a 10-goal game against Rockford.

End game: Streak spurred the Mallards to a Western Division title and a run to the Colonial Cup finals, where the team lost to Flint. The streak was in Matt Shaw's only year as head coach.

By the numbers: Mallards outscored opponents 33-14 over seven-game span.

End game: Streak spurred the Mallards to a 51-20-3 mark, starting a run of six straight 50-win seasons. The Mallards won West Division and their first Colonial Cup in John Anderson's only year as head coach.

By the numbers: Mallards outscored opponents 45-18 over the 10 games.

Top performances: Mickey Lang had 10 goals and five assists over the two streaks while Mike Stinziani added seven goals and three assists. John Murray posted a 35-save shutout to start the second streak.

End game: The pair of streaks, part of a month in which the Mallards went 11-2-0, helped them finish 34-26-6, securing a Central Hockey League playoff berth in Terry Ruskowski's first year as head coach.

On Friday, overtime was kind to Quad City as the Storm outlasted Pensacola to extend the franchise's longest win streak to 10 games.

With an eight-game win streak on the line Thursday, the Quad City Storm found themselves trailing the Birmingham Bulls halfway through the second period.

Quad City Storm players gather to celebrate a goal by Filip Virgili during a game against the Evansville Thunderbolts Saturday at the TaxSlayer Center.

Chris Francis scored seven goals and added seven assists to lead the Quad City Mallards in scoring during an 8-game winning streak in 2017.