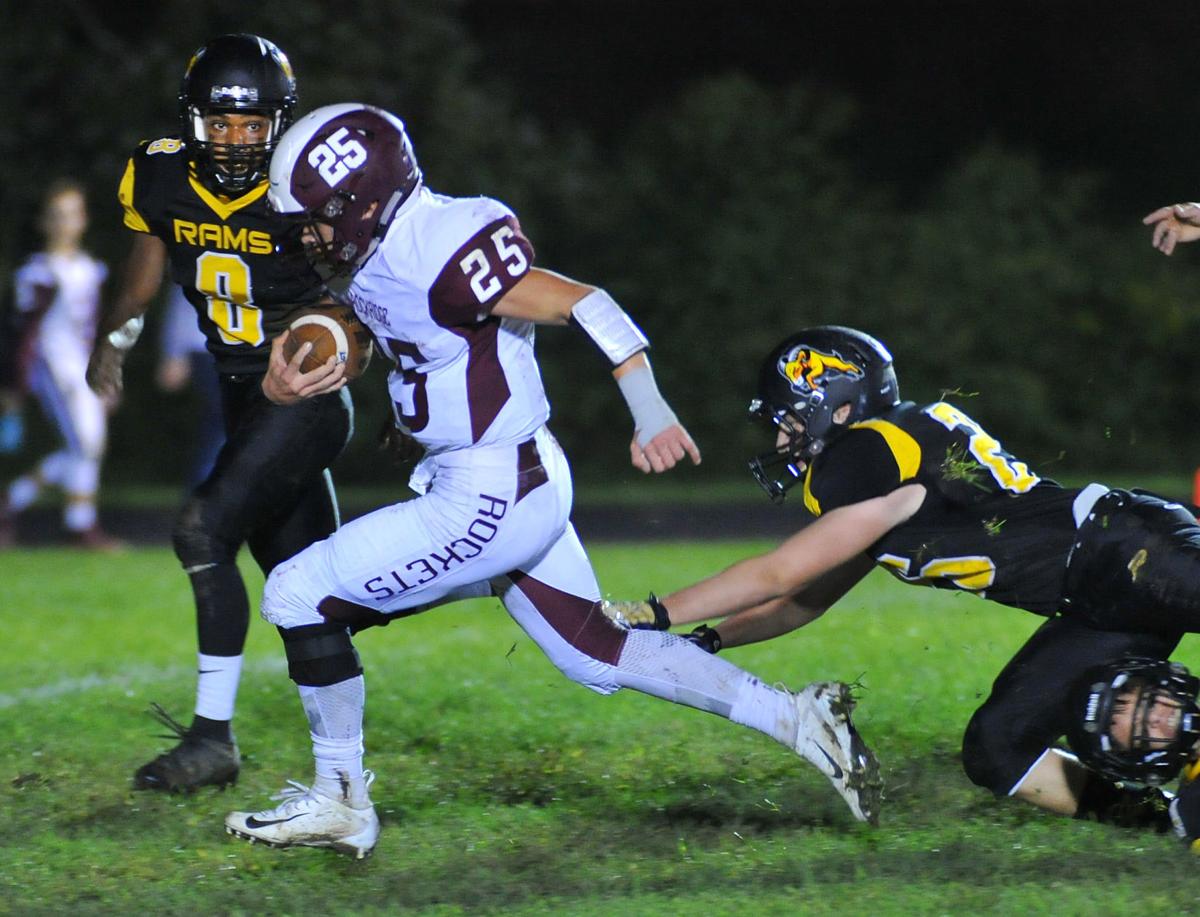 Rockridge's Thomas Rollason runs past Riverdale's Denzell Smith and Devin Gephart as he heads for a touchdown during the first half Friday at Riverdale. 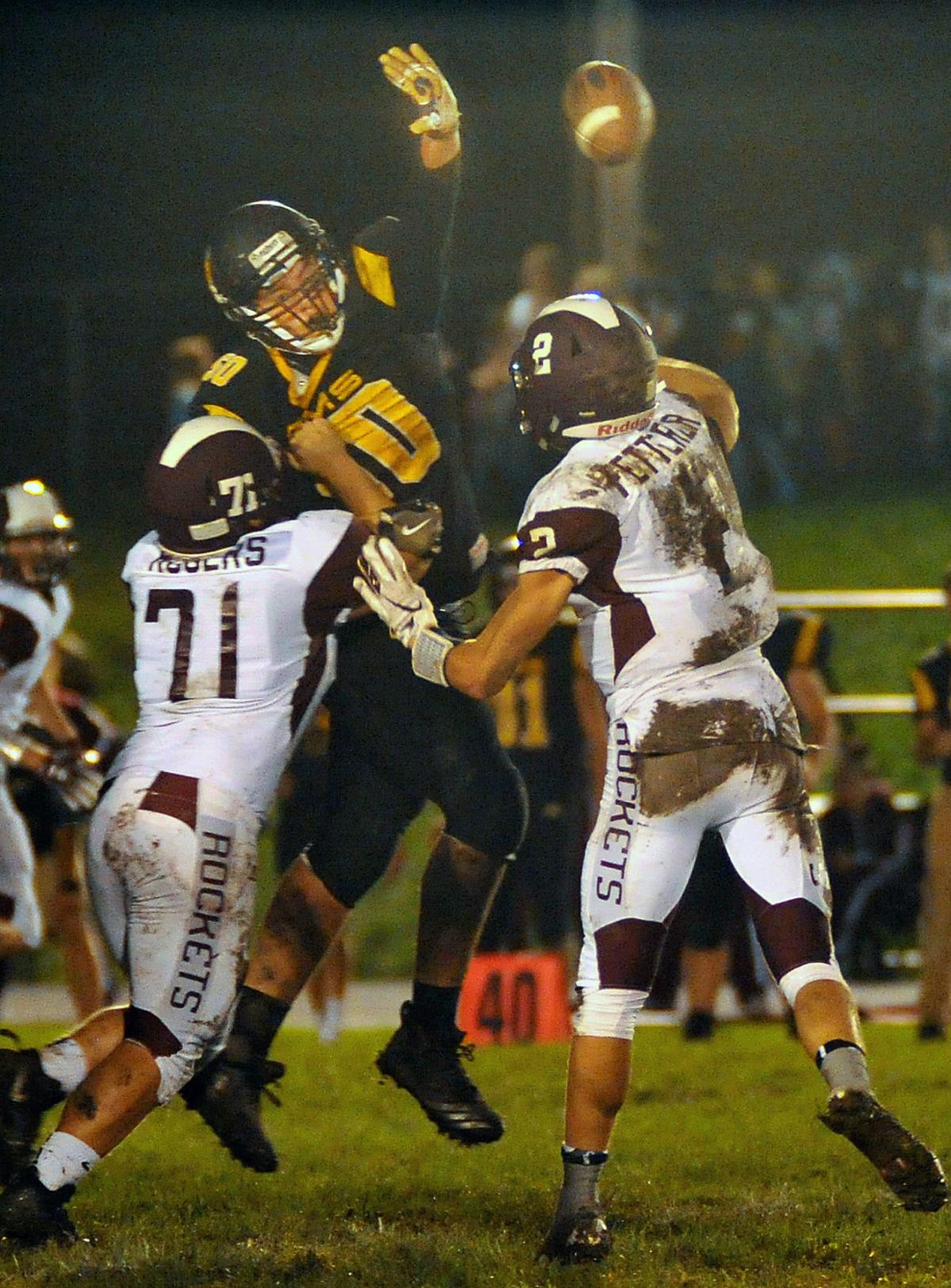 Rockridge's Riley Fetterer has his pass knocked down by Riverdale's Charles Mitton during the second quarter Friday at Riverdale. 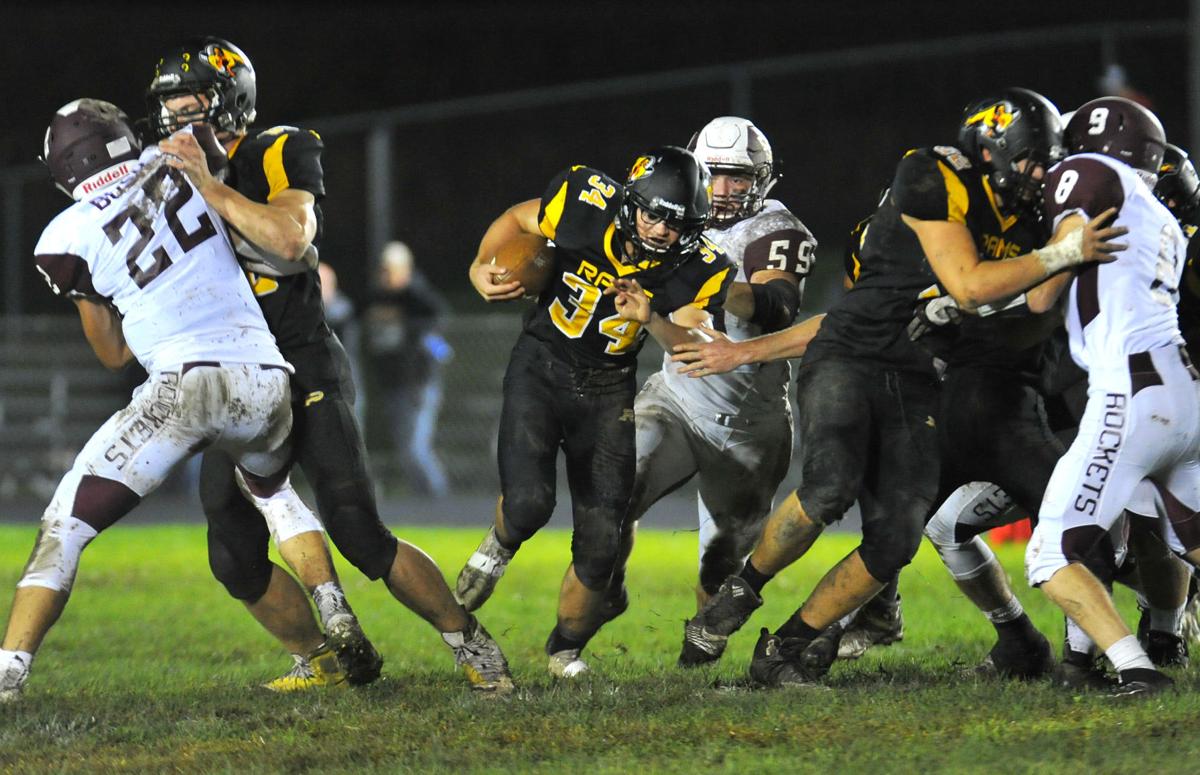 Riverdale's Cody Lamb finds an opening in the line as he is given chase by Rockridge's Cameron Gerischer during the first half Friday at Riverdale.

PORT BYRON — The Rockridge Rockets, ranked 5th in the Illinois Class 2A football poll, overwhelmed the Riverdale Rams with a combination of explosive offense and tight-fisted defense on Friday night here at the Riverdale High School field for a 43-14 victory.

So far this season, fans of the 3-0 Rockets are becoming used to watching senior quarterback Riley Fetterer light up the offense with his strong arm, and in the road game at Riverdale, he definitely lived up to the hype, completing 9 of 21 passes for 209 yards and three touchdowns.

But on this night, the defense, led by senior linemen Cameron Gerischer, Myles McCabe, and Robert Young, along with sophomore Ryan Parchert, proved to be an insurmountable force of its own.

“Our defensive line was an impenetrable brick wall out there,” said Rockridge coach Sam Graves. “Last week at Erie-Prophetstown, they showed us how they can control the line of scrimmage, and they were even tougher against Riverdale.”

On the very first play of the game, Fetterer hit Nate Henry for a 70-yard touchdown strike to give Rockridge an early lead. On the Rockets’ next possession, Fetterer capped an impressive drive with a 2-yard touchdown run. The 2-point conversion pass to Lane Dieterich put the Rockets up 15-0.

“Our coaches have stressed the importance of dictating the pace of the game by grabbing an early lead, and Riley Fetterer again showed his growth and maturity at the quarterback position early in the game,” said Graves.

The first half was all Rockridge, as Fetterer threw for all three of his touchdowns, and also ran for 55 yards and two more scores as the Rockets led 43-0 at the half. The Rockridge defense held Riverdale to just two first downs, with 26 yards on the ground and 75 yards passing in the first half.

“I was impressed with our defensive intensity, as in addition to stopping the run, our guys recovered two fumbles and had three sacks of the Riverdale quarterback in the first half,” said Graves.

Riverdale, under thirrd year coach Guy Dierikx, showed life in the running game during the second half, with two long touchdown runs—a 27-yarder by Jacob Meloan, and a 45-yarder by Cody Lamb.

In addition to the outstanding game by Fetterer, the Rockridge offense was fueled by Henry with two touchdown receptions, 59 receiving yards and one touchdown by Cody Bush, and 41 rushing yards and a touchdown from Thomas Rollason.

Next Friday, Rockridge faces Fulton at home, and Riverdale travels to Orion.

Rockridge's Thomas Rollason runs past Riverdale's Denzell Smith and Devin Gephart as he heads for a touchdown during the first half Friday at Riverdale.

Rockridge's Riley Fetterer has his pass knocked down by Riverdale's Charles Mitton during the second quarter Friday at Riverdale.

Riverdale's Cody Lamb finds an opening in the line as he is given chase by Rockridge's Cameron Gerischer during the first half Friday at Riverdale.