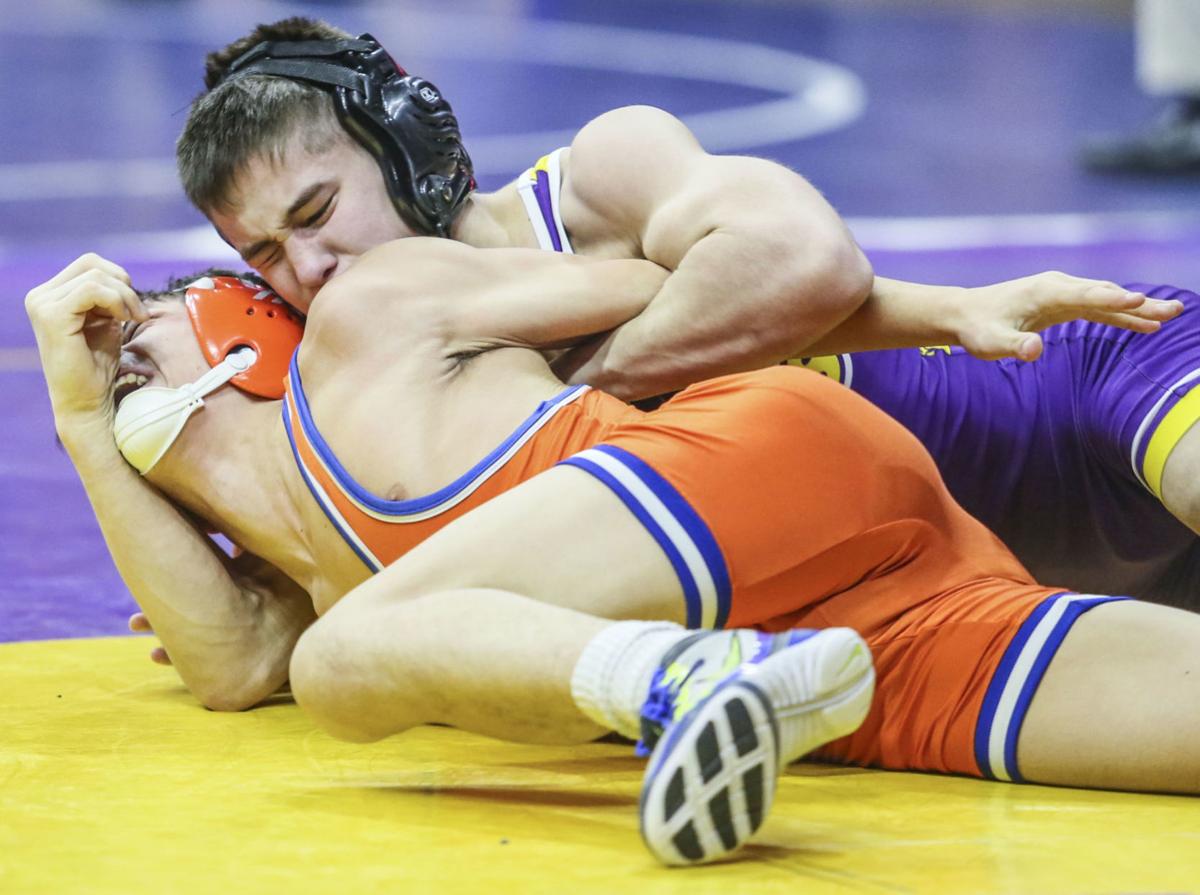 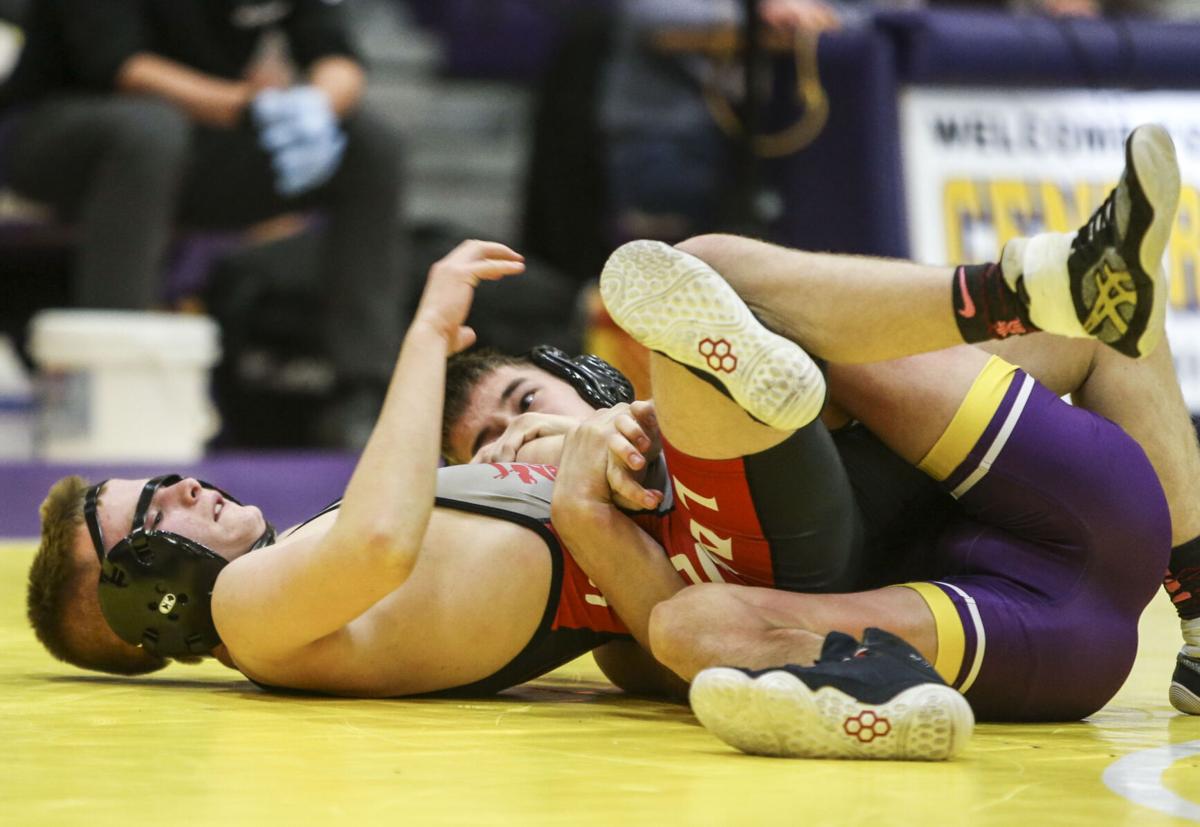 Central DeWitt's Keaton Zeimet closes in on a pin against North Scott's Logan Schmit during a dual meet last week in DeWitt. Zeimet chases an elusive state championship this winter for the Sabers. 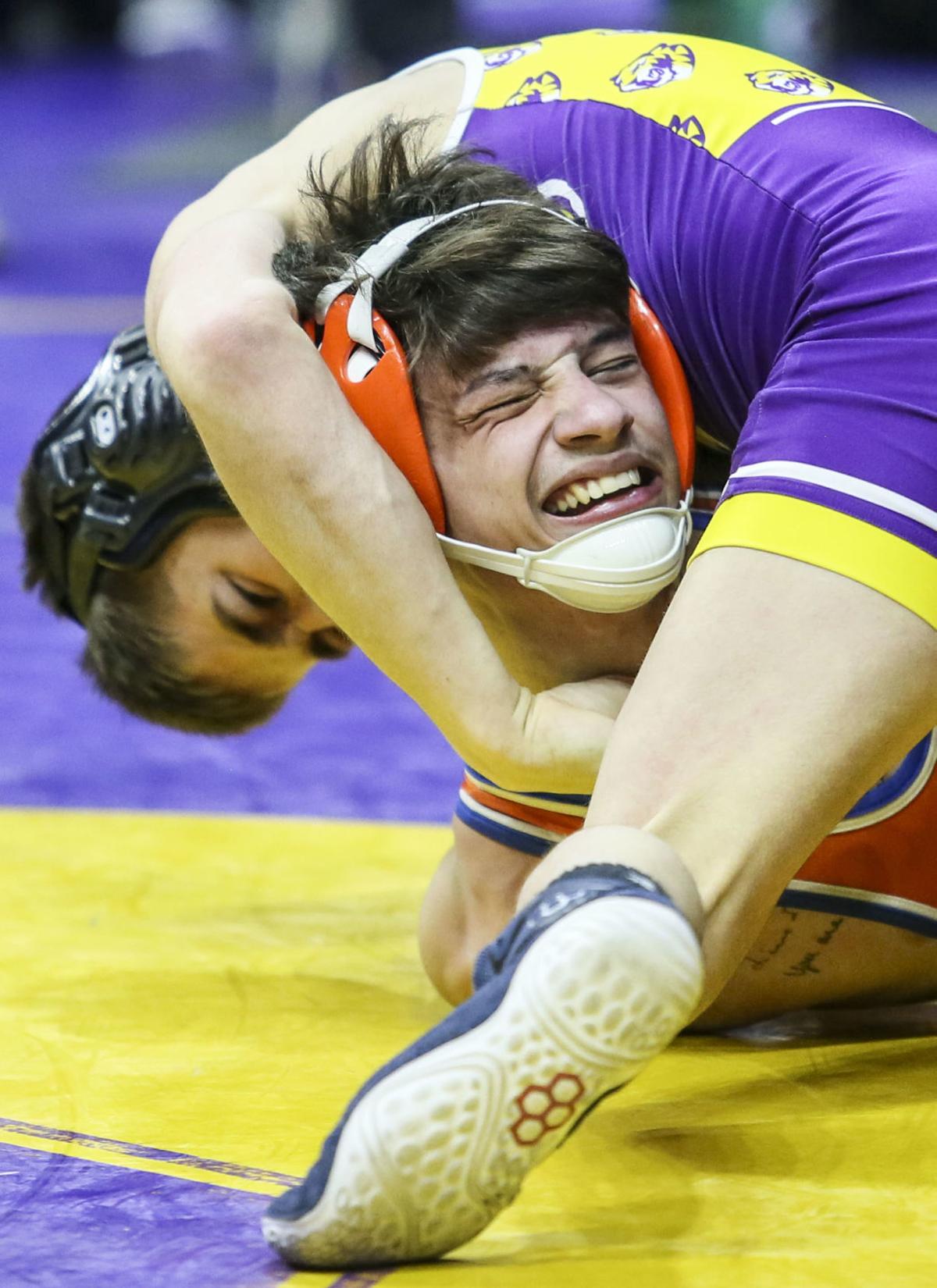 DEWITT — Keaton Zeimet already is the most decorated wrestler in Central DeWitt High School history. He has the school record for pins with 85. He is five wins from surpassing Justin Petersen as the program’s all-time wins leader.

“I’m pleased with my career but not satisfied,” Zeimet said.

That’s because the ultimate goal still eludes him — a state championship.

Fifth place as a freshman and third each of the past two seasons at the state tournament in Iowa Class 2A, the 120-pound senior is on a quest to reach the top of the podium come February in Des Moines.

“The past two years, I’ve wanted it,” Zeimet said. “This year, I need it. It is my last crusade, my last chance at a state championship.”

Every time Zeimet steps on the mat, he visualizes claiming a state title. On a mirror at his house, he has written on a poster: “Who are you? A champion.”

Zeimet has lived a championship lifestyle the past four years.

He’s a 4.0 student, a member of National Honor Society, president of the student council, a Huddle Leader for Fellowship of Christian Athletes, a member of Future Business Leaders of America and leads an anti-drug coalition with Camanche High School.

On the mat, he has 128 victories versus only eight defeats. He has won 24 tournament titles in his career, including conference, sectional and district championships. He has been in the state semifinals each of the past two seasons.

“I’ve never had someone more committed to doing everything right,” Sabers coach Matt Ohnemus said. “Keaton doesn’t throw a ball very well and is not necessarily athletic, per se, but he’s a great wrestler who has honed his skill through absolute, unrivaled focus.

“He does everything with a championship mindset. It is pretty special.”

Wrestling has laid the groundwork for all components of his life.

"The sport is about discipline, requires time commitment, motivation, determination and teaches you respect," Zeimet said. "Once you wrestled, everything in life seems easier."

Influenced by his father, who competed at Northeast High School, Zeimet started wrestling around age 4 along with participating in soccer and gymnastics.

By fifth and sixth grade, wrestling became a passion.

“I drifted toward it just because I liked the aggressiveness,” Zeimet said, “and you always get new competition.”

Even before Zeimet stepped into Central DeWitt’s wrestling room as a freshman, Ohnemus knew he had an extraordinary talent. Living down the street from him in DeWitt, Ohnemus started working with Zeimet in seventh and eighth grade.

“He was beating seniors a couple weight classes above him right away as a freshman,” Ohnemus said.

Zeimet has worked feverishly to enhance his skill.

The front headlock has been a go-to move for him and turning opponents has never been an issue. Ohnemus said Zeimet has improved his leg attacks and transitions.

“I feel like I’m more aggressive on the mat now,” Zeimet said. “I'm looking for better positions each time.”

The road to a championship is not easy with a loaded 120-pound class in 2A.

In addition to Zeimet, West Burlington/Notre Dame-Danville’s Blaine Frazier (fourth at 113 pounds in 3A last year), Center Point-Urbana’s Cole Whitehead (state runner-up at 113 in 2A) and Benton Community’s Jaiden Moore, a state runner-up at 106 for Don Bosco last year, are all projected at that weight.

“Getting out from underneath is probably where he needs to keep improving before February to be ready to beat the very, very best,” Ohnemus said.

Zeimet lost 2-1 to Whitehead in last year’s semifinals. The season before that, he dropped a 7-2 bout to Frazier in the semifinals.

“Looking back at those matches, there were some technique things I can improve on,” Zeimet said. “At the end of the day, you’ve got to go out there and want it."

The semifinal setbacks have driven him to work harder in the offseason.

Zeimet plans to wrestle in college. He hasn’t narrowed his choices, but has an interest from several schools in the American Rivers Conference (Luther, Loras and Coe).

Regardless of how this season unfolds, Zeimet already has left an indelible mark on the Sabers’ program.

“It has been a joy to coach him, he’s one-of-a-kind,” Ohnemus said. “He’s an absolute hammer and the greatest we’ll have come through this place. Even if he wasn’t unbelievably talented, he’s the type of kid we’d want in our program because of his high character.

“It is an incredible thing for our program and our younger kids. It has been a long time since we’ve had that kind of person in our program. We have to use what he’s left and build on that to move the program forward.”

While he admits this season is emotional being his last, his focus is intently on the end goal.

“I feel like if I don’t get that state championship, there is going to be a little voice in the back of my head saying, ‘What could you have done?’” Zeimet said. “I’m prepared to take it this year.”

Unusually warm temps will give way to rain, cold and snow later this week. Here are the weather details from the National Weather Service.

Central DeWitt's Keaton Zeimet closes in on a pin against North Scott's Logan Schmit during a dual meet last week in DeWitt. Zeimet chases an elusive state championship this winter for the Sabers.