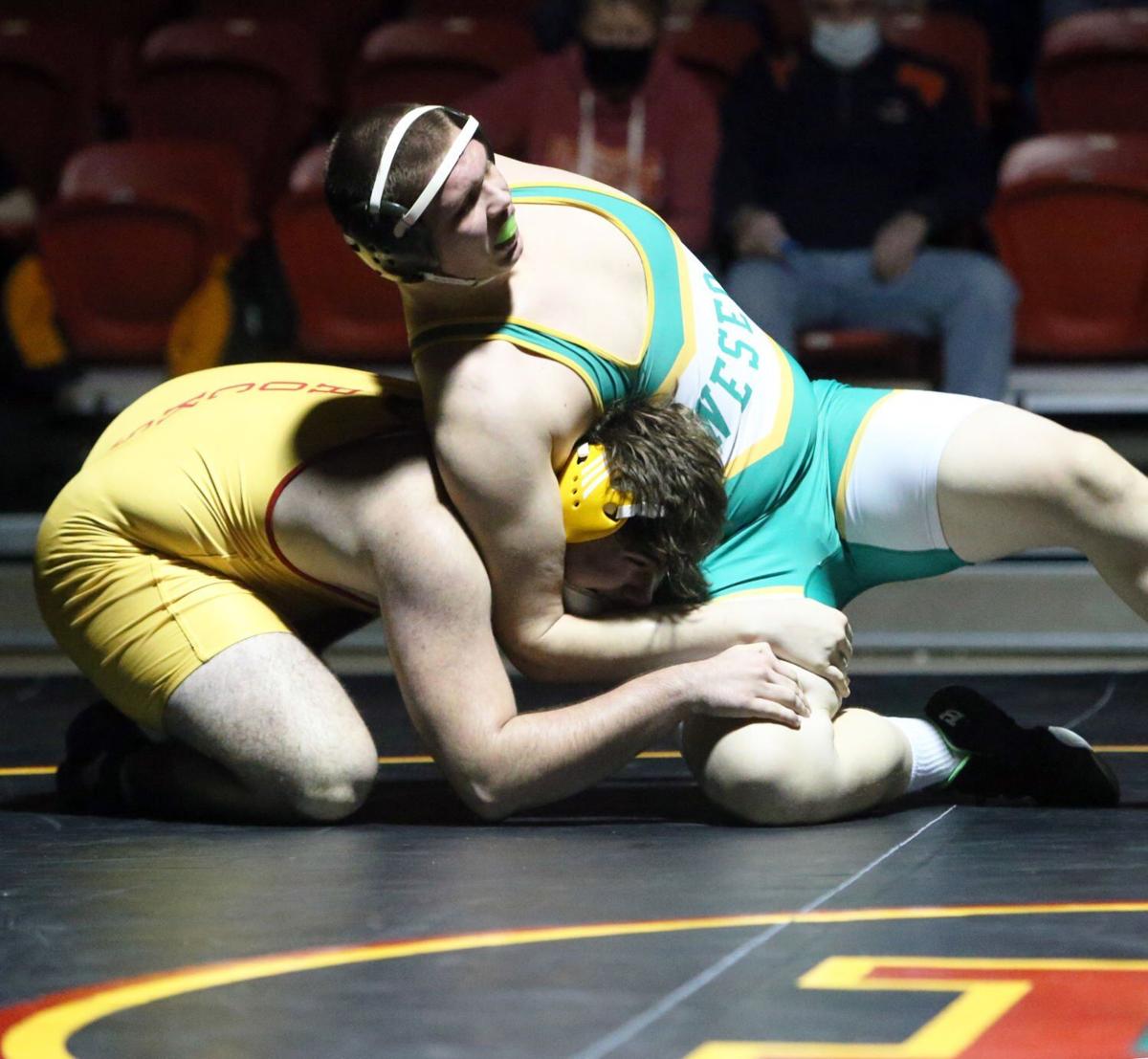 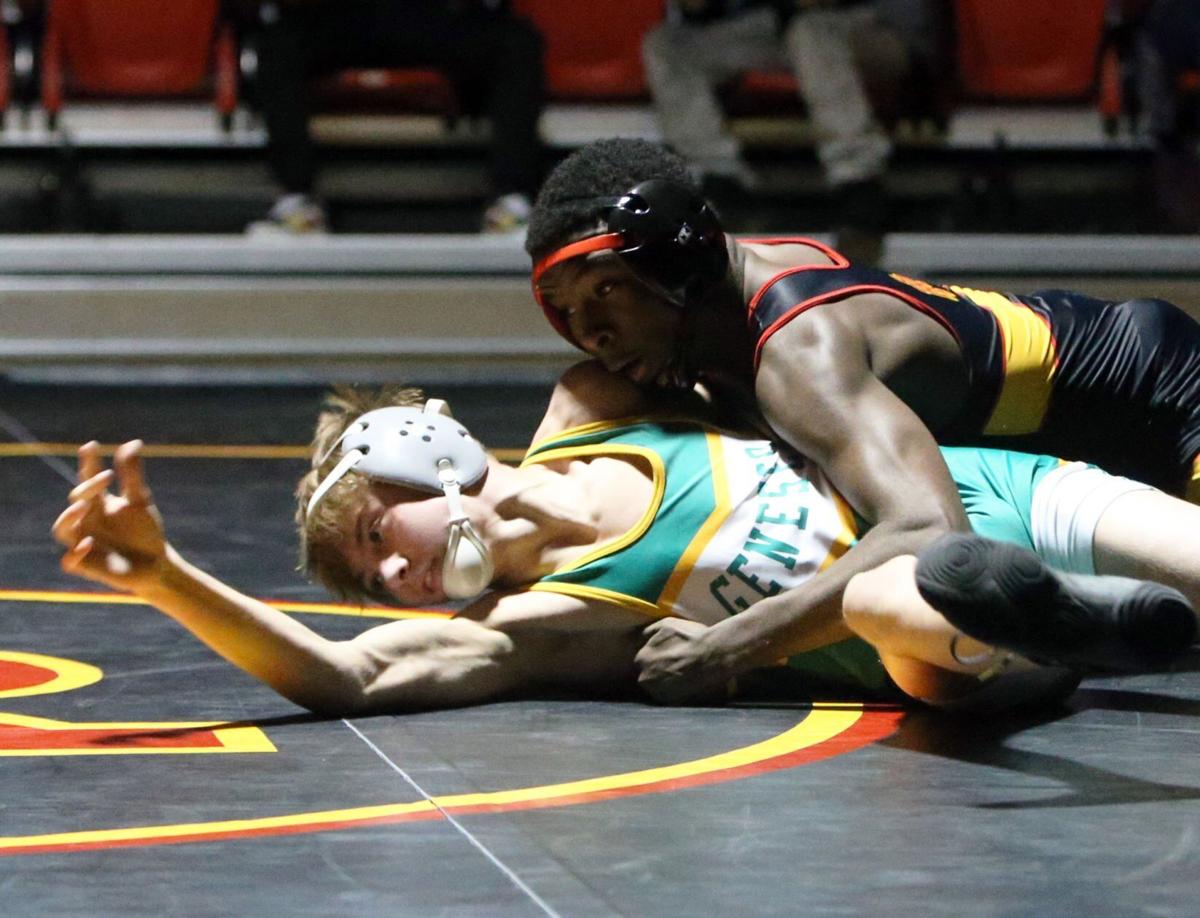 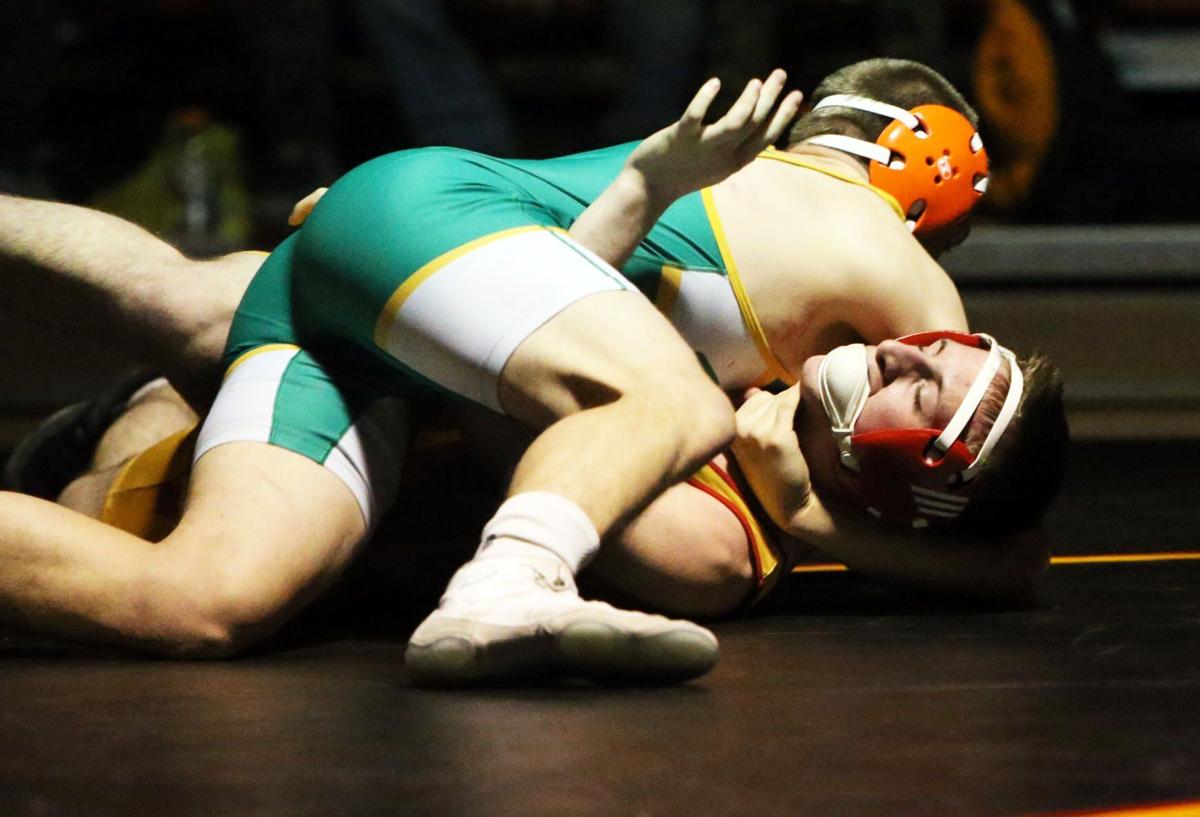 After eight pins, two technical falls, two decisions and a forfeit, the wrestling dual between Geneseo and Rock Island came down to the heavyweight bout.

Geneseo led 36-34 heading into the matchup between the Maple Leafs’ Levi Neumann and the Rocks’ Eli Gustafson, but the dramatics didn’t stop there. And they didn’t stop after the first period, or the second.

Neumann, who qualified for the IWCOA state tournament as a sophomore last June, was tied with Gustafson heading into the final two minutes.

Both wrestlers took the first two periods to get a feel for the other's moves, which led to both mainly remain on their feet, but the third period was filled with action as soon as the clock began to tick.

With 55 seconds remaining, the match quickly shifted. Gustafson was on all fours and looked like he may escape his opponent's grasp when Neumann locked his arms around Gustafson’s waist and drove him into the ground with the force of his legs. Neumann gained position on top and quickly moved around to Gustafson’s right side for final push. From there, Gustafson had no way out.

Neumann earned the pin and, in the process, sealed Geneseo’s 42-34 dual meet victory over Rock Island on Thursday on the road.

“I did an extremely risky thing by flipping around him, which I thought was either going to make me lose or be really funny and be the most awesome thing ever,” Neumann said. “I did that, and then I got the butcher on him (wrestling move), and once I had that I knew he was going over. Nothing stops me when I have that move.”

Neumann jumped up afterwards and his coaches and teammates went wild on the sidelines. Walking into the spotlight knowing the team outcome rests on your shoulders is a lot of pressure, but for Neumann he knew what he had to do — and had some support.

“Well, I was just trying to get myself really mad because I knew I had to win,” Neumann said. “But when I started walking up, Coach (Tom) Rusk came up to me and said, ‘Do what you do.' And that really got into my mindset that I can do this. Nobody is stopping me.”

And nobody did. Neumann’s victory ended a dual that was about as close as it could get.

“I knew that our top two guys were going to pull that out for us, but I didn’t think heavyweight was going to be that close,” Geneseo coach Jon Murray said. “I kept confidence in (Levi) and stayed pretty calm during it. There is enough energy from those other coaches without me jumping in on that, I didn’t want to put too much pressure on these guys.”

But despite the scoreboard, the individual matches were mostly lopsided. Only two of the 14 went the distance and were decided by decisions. The remaining 12 were pins, tech falls and a forfeit. The entire varsity meet took 66 minutes.

“We kind of knew it was going to be like that,” Rock Island coach Joel Stockwell said. “We also knew it was going to come down to bonus points. We saw that we could win seven matches and they could win seven matches. It came down to those swing matches at 145 and 152. We got the 152 and it was huge. Those other matches we have studs, and they have studs."

"Sometimes, we try to tell the guys to not give up the pin in those situations. That’s the team aspect of wrestling that not a lot of teams think about. Everybody has an assignment.”

The studs Stockwell mentioned did their part in the first four matches Thursday, with each one ending in a first or second period pin. Rocky’s Truth Vesey pinned Tim Sebastian at 106 before Geneseo’s Zachary Montez responded with a pin over Sammy Niyonkuru. Then, Rocky’s Daniel McGhee pinned Devan Hornback in just 36 seconds. But Geneseo came right back with Carson Raya pinning Dominick Eckmann-Allred in the first period.

“We got caught in some pins where we could have made those a match if we survived a couple periods and were able to wear them down,” Murray said. “There were just too many technical mistakes. The third periods would have been different, but we have to avoid those technical mistakes to avoid being in those positions in the first place.”

The Maple Leafs’ Jack Snyder, who qualified for state last year, went up against Omareon Gay at 132. It was a physical and hard-fought match, and the first to go all six minutes. Snyder pulled out the 3-1 minor decision, which put Geneseo up 15-12, but Rock Island took that as a positive.

“Omareon wrestled really well against a kid that is ranked to only allow them three team points,” Stockwell said. That saved us three points, so it’s almost like a win.”

From there, Rocky regained the lead when Aoci Bernard pinned Shane Bagby in the first period. Geneseo’s Josh Hock followed with a 9-4 minor decision over Tristan Willoughby.

After that, the matches were lopsided. Rocky’s Matthew Cook pinned Aiden Damewood at 152, Geneseo’s Anthony Montez won by forfeit at 160, and the Maple Leafs’ Harrison Neumann pinned Eian Marshall in the second period at 170.

The Rocks responded with two huge wins by technical fall by Steven Marquez over Maddux Anderson at 182 and Andrew Marquez over Landon Shoemaker at 195 to take the lead at 34-30.

But Geneseo’s Tim Stohl pinned Israel McGowan in the second period before Neumann finished it off in the third period of the heavyweight bout to give the Maple Leafs the dual meet victory.

“It’s really exciting to see this team as a whole come together to beat these guys,” Neumann said. “Seeing us go and beat some of these big teams is really special.”

These rare photos show Tom Brady from his baseball days

Watch now: Bears nation weighs in on hirings and more

Watch now: Bears nation weighs in on hirings and more

Stohl powers Geneseo wrestlers to title at own invitational

Geneseo's Tim Stohl couldn’t stop smiling. Even when the pressure was on, Stohl kept smiling.

Alleman's Charles Jagusah is this week's Illinois Pacesetter. The dual-sport junior athlete is 23-0 with impressive victories over some of the state's best earning him the No. 1 spot in the latest IWCOA rankings.

Bettendorf had six champions at Saturday's Midwest Shootout, half of those freshmen and another a sophomore.

A recap of Saturday's wrestling action in the Quad Cities:

Bettendorf High School’s wrestling team was humbled last week in its gymnasium. The Bulldogs were the ones dishing out the pain Thursday night in a rival’s gym.

This week's Iowa Pacesetter is Bettendorf freshman TJ Koester. The 106-pound wrestler is 20-1 this season, including six wins last weekend at The Clash, a national 32-team tournament in La Crosse, Wis.

In a battle between two heavyweight wrestling programs, Geneseo rallied for the 40-29 dual meet victory over Moline at Geneseo High School on Thursday. Aiden Damewood's comeback victory led the charge.

This week's Illinois Pacesetter is Geneseo freshman wrestler Zachary Montez. He is off to an 18-2 start, including a win over last year's IWCOA state champion last weekend.

North Scott recorded four pins and a forfeit Thursday to beat fourth-ranked Bettendorf in a dual meet at Bettendorf.