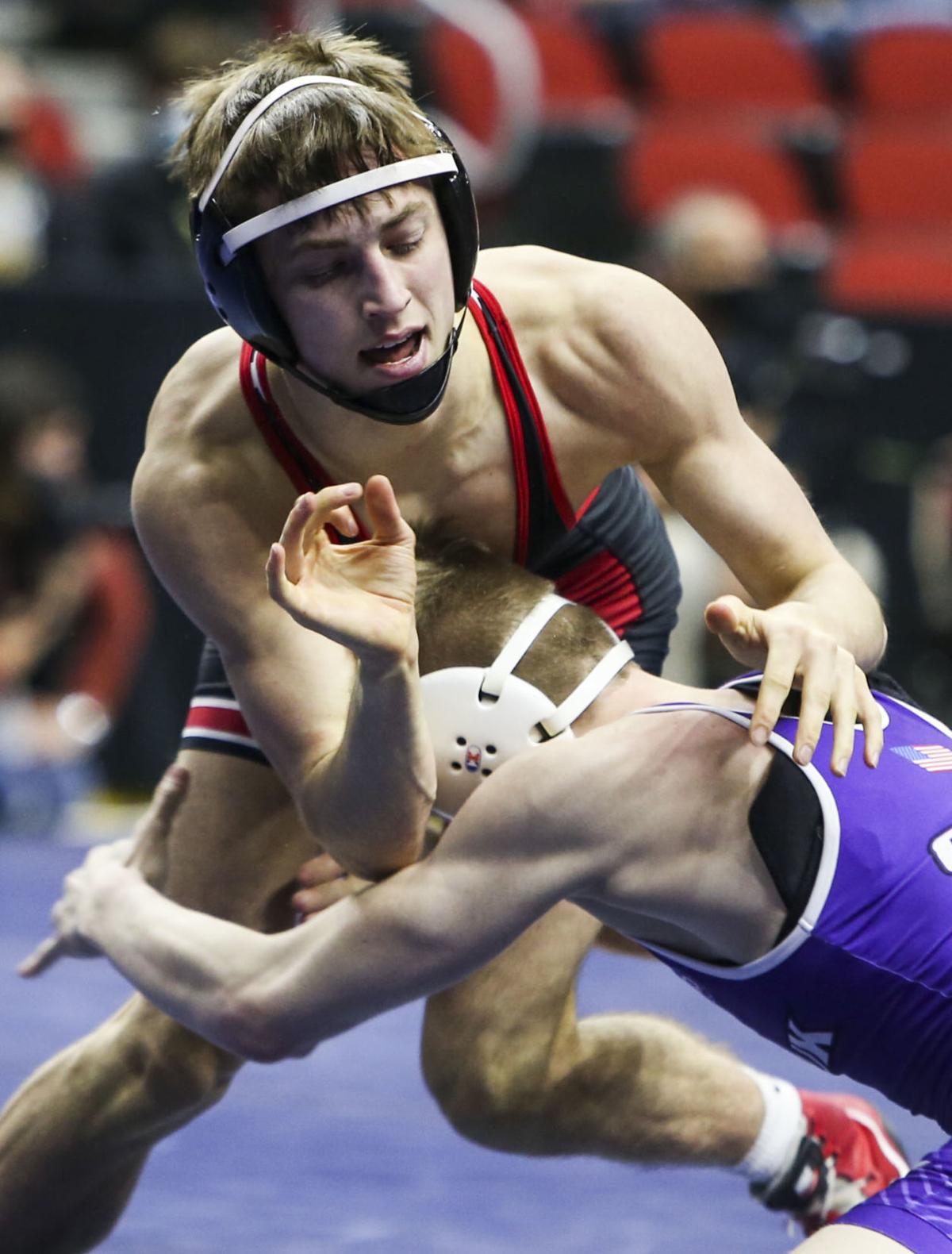 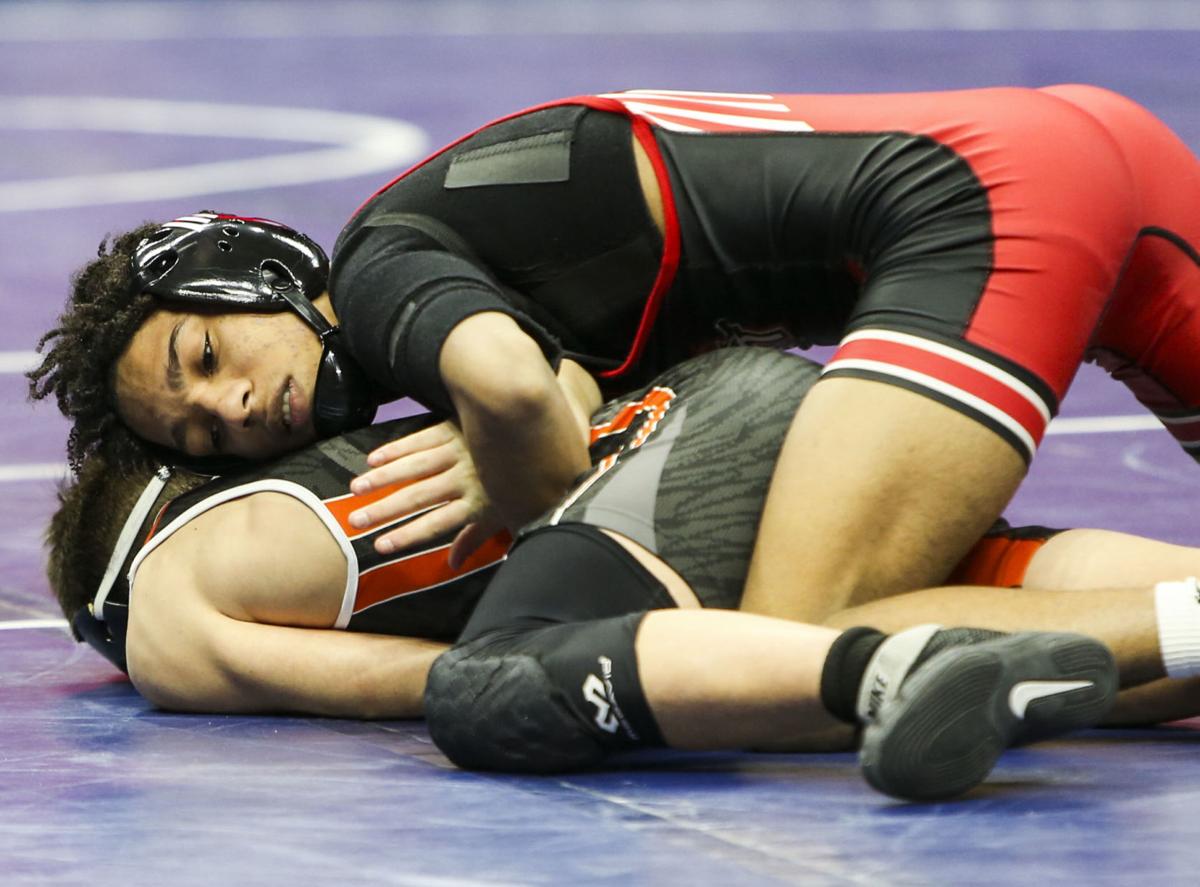 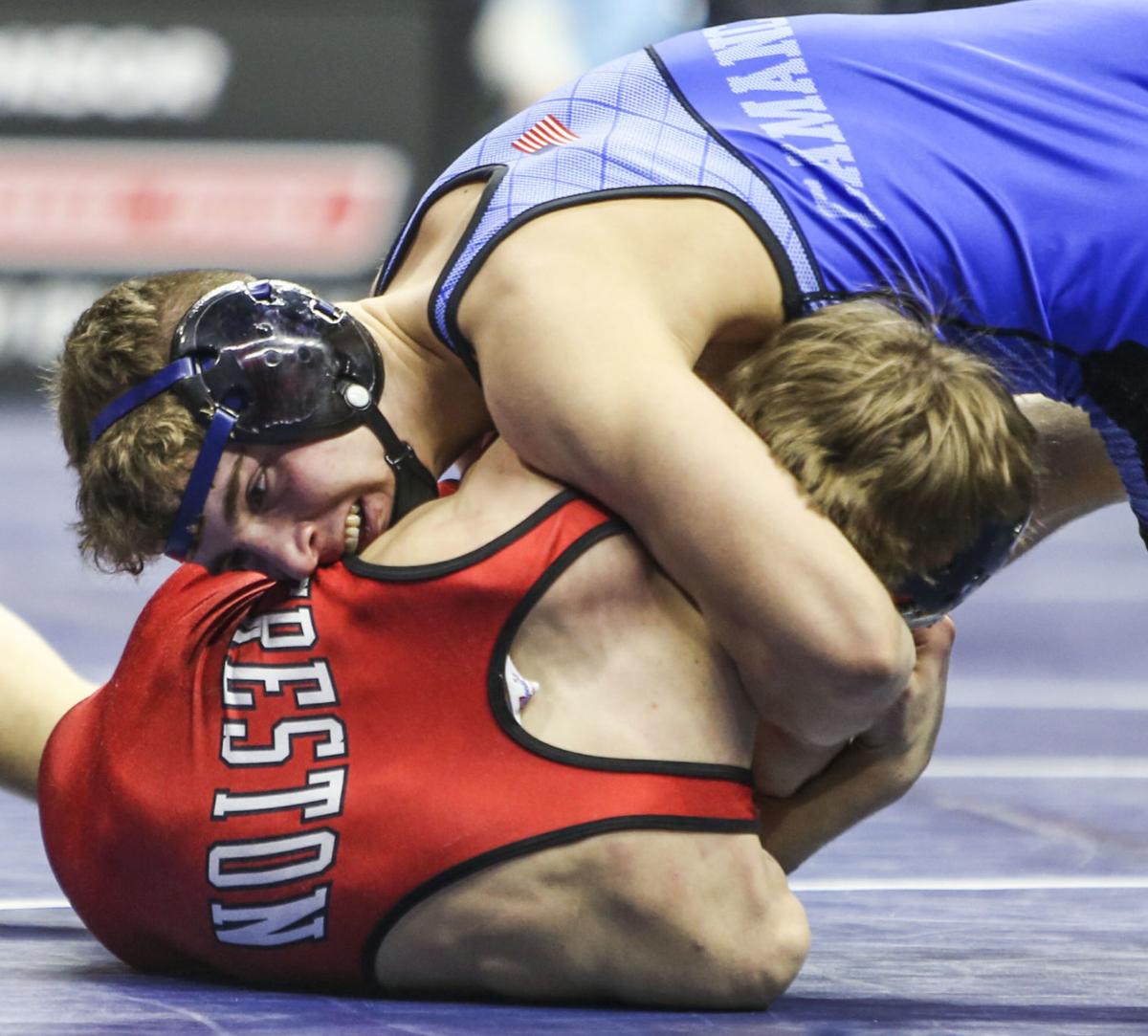 Camanche's Eric Kinkaid puts Creston/Orient-Macksburg's Keaton Street on his back in a 145-pound match Thursday night at the Iowa Class 2A state tournament. Kinkaid recorded a pin in 65 seconds.

DES MOINES — Davenport Assumption might not have the volume of state wrestling qualifiers like it has had in previous seasons, but Jon Terronez felt very confident on the eve of the tournament about how his five individuals would fare this week.

“I brought my suit, so I expect to be here and coaching in the state finals (Saturday),” the Assumption coach said Wednesday. “I expect all of them to place, and I wouldn’t be surprised if we have a couple state champions.”

The Knights lived up to the billing in the opening round of the Class 2A tournament Thursday night.

The five wins vaulted Assumption into a tie for third place after the opening day with 17 points. West Delaware leads with 36 points.

“It was amazing,” Terronez said of his team. “They all looked really good.

“When you have the team aspect, the kids have other things to worry about. This is all about them and the responsibility is on them. They’re the ones held accountable and they’re rising to the occasion.”

Macias, Catour and Morgan had pins while Bass, wrestling on a bum shoulder, went a full six minutes and posted a 12-2 major decision victory.

Fitzpatrick, meanwhile, earned some revenge. After losing to Keokuk’s Tate O’Shea in the sectional final, Fitzpatrick used a first-period takedown to stave off O’Shea 3-1.

“He’s gotten me twice this year, so I’m glad I could return the favor and get him back,” Fitzpatrick said.

The takedown was the difference.

“We’re very equally matched on top, so I knew it was going to come down to whoever could get that takedown,” Fitzpatrick said. “He got the one at sectionals. For me to get that one tonight, that was a huge confidence boost.”

Bass, pulled off the mat because of his shoulder in Wednesday’s state duals competition, built a 7-1 cushion after the first period against Sergeant Bluff-Luton’s Ethan Skoglund.

“It isn’t so much because of my gas tank, but to build a lead before my shoulder takes affect is huge,” Bass said. “It not only changes the way I wrestle, I have to be smarter in terms of what positions I need to stay out of.”

Terronez was encouraged to see Bass go the distance in his first round.

“If he can make it through a six-minute match at the state tournament, he can be just fine,” Terronez said. “I wouldn’t be surprised to see him on top of the podium (Saturday).”

Camanche had all four of its qualifiers advance to Friday.

Kinkaid took down Street 14 seconds into the bout.

“That’s the mentality, that’s the pace I’m going to try and set this tournament,” Kinkaid said. “That’s my style of wrestling and where I’m going to do the best.”

It was the 38th win in 41 matches for Kinkaid this season. The junior said he still feels the sting of last year’s seventh-place finish despite being the top seed.

“I’ve been working in order to prove to myself that I’m good enough to be at the top of the podium,” Kinkaid said. “I didn’t have the right mindset last year as a sophomore, still a little self-conscious.

“This year, I’m going in with nothing to lose. I’m going to go out and wrestle, be the best I can and see where it takes me.”

Camanche’s Logan Waltz (170) and Cade Everson (182) lost first-round matches but rebounded in the consolation round. Everson bounced back after losing in the final second of his opener.

Central DeWitt’s Keaton Zeimet is on track for his fourth state medal. The senior racked up 16 points in just more than a period for a technical fall win at 120. His teammate, Royce Butt, split his two matches at 113.

West Liberty’s Kobe Simon (220) breezed into the quarterfinals with a second-period pin. A state runner-up last year, Simon posted two takedowns in the first 15 seconds of the match and nine first-period points.

“I wish I could have put him away sooner, late in that first period, but overall I wrestled great,” Simon said. “I got to my offense and came away with a fall.”

DES MOINES — Dustin Bohren pulled it out in dramatic fashion. Bradley Hill is one win from a perfect season. Griffin Liddle is on the doorstep of a state repeat.

DES MOINES — Travis Hodges was in a precarious position after the first period of Thursday afternoon’s Class 3A state tournament match.

DES MOINES — Jaxon Bussa had never qualified for the state wrestling tournament until his senior season.

Injuries get best of seventh-place Knights

Camanche's Eric Kinkaid puts Creston/Orient-Macksburg's Keaton Street on his back in a 145-pound match Thursday night at the Iowa Class 2A state tournament. Kinkaid recorded a pin in 65 seconds.