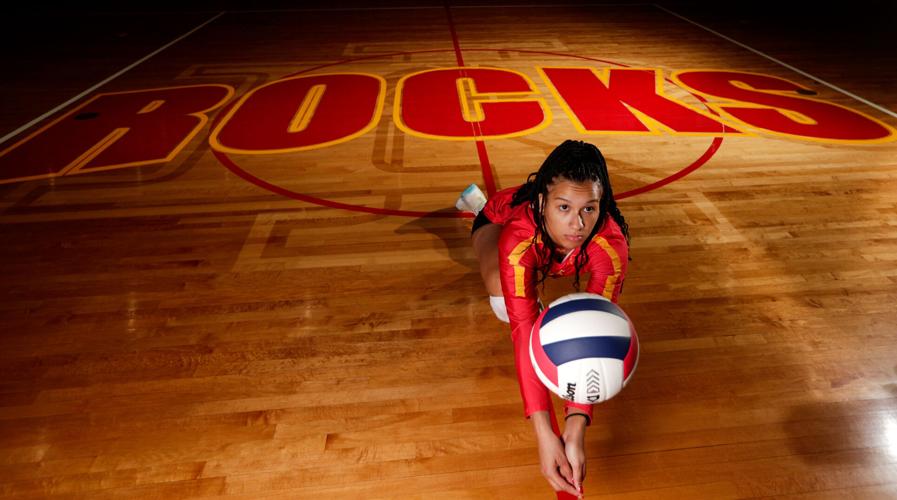 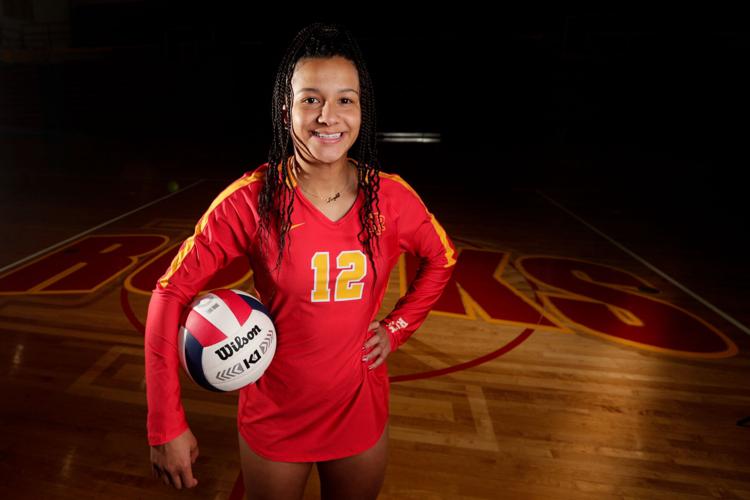 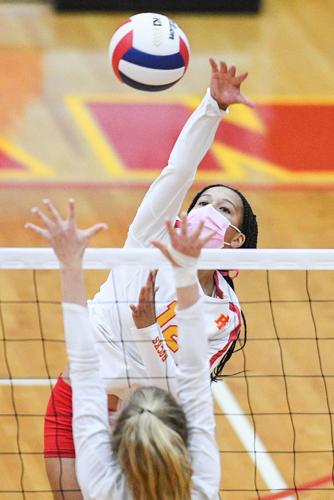 Rock Island's Kayla Rice hits an attack over a Moline defender during a match last October in Rock Island.

A few years ago, Kayla Rice wasn’t sure where volleyball fit into her life.

Basketball was her favorite sport, and soccer took attention in the spring. During her sophomore year, Rice broke her finger at volleyball tryouts and missed almost the entire season.

Rice began her Rock Island High School career as a setter, moved to a right-side hitter last season and finally took over the left side (outside hitter) this year — and was voted a team captain in the process.

This week’s Illinois Pacesetter leads Rock Island with 127 kills, 46 more than any other teammate. She is also third in aces (22) and digs (96). Rice plays all six rotations and has become the vocal leader of the team.

"Kayla is very, very adaptable and very determined to excel in whatever she’s doing," Rock Island volleyball coach Morgan Gray said. "She doesn’t like to lose. She doesn’t like to make errors. She’s pretty hard on herself, but she’s a competitor. She wants to win, but she also wants her teammates to win. It’s been really nice seeing her embrace the role as captain and truly bring everybody together towards a common goal."

Rice is adamant to acknowledge her teammates in postgame interviews and pushes the credit of her stats to her setters and passers.

Gray said Rice, who is normally very outgoing and well-spoken, can be almost awkward at times when talking about herself because she doesn’t like to discuss her accomplishments. It’s a trait Rice said she learned from past teammates.

"Watching people like Emily Allison last year, I mean, I saw how good of a captain she was," Rice said. "I knew that I would most likely be stepping into her shoes, which were some big shoes to fill. I just scouted her and watched what she did. I wanted to be like her. And Grace Gustafson, too. She played the same position as me and I learned from her how she hit the ball and set her alignment."

That attention to detail and dedication to get better is what Gray said makes Rice such a special athlete. She’s been playing volleyball since she was in fifth grade, but it wasn’t until recently she realized how much this sport could impact her life.

"When I got to high school it got serious — I looked at it like basketball has always been my main sport, but volleyball is a sport I really love too," Rice said. "It has really taken off with Coach Morgan. She believed in me and pushed me to be a good hitter and always told me I was good at it. She’s always pushed me and motivated me to do more, like club volleyball."

Rice also attributed not only her individual success to Gray, but the team success as well. Rock Island is second in the Western Big 6 Conference race with a 6-2 record and finished 11-3 in conference play last season.

"Coach Morgan pushes us in practice to go 110%," Rice said. "If you’re not trying hard, it means you don’t need to be at practice. And I think that helps me as a person because it motivates me to not quit or drag my feet when I’m down on myself about sports, school or life.

"So when I’m at volleyball I’m going 110% because I know people are looking up to me and I’m relying on others as well."

That effort shows on the court, especially in recent matches. Rice has led the team in kills (12, 5, 12) in the last three conference matches.

And as a junior on the basketball court, she was just as effective. She averaged 10.6 points per game in league play and led the WB6 with 47 steals.

"She’s a three-sport athlete, but she pretty much plays two sports in the offseason as well," Gray said. "Like (Monday) night, we get done with practice and she just goes and shoots some hoops at the open gym. She’s constantly involved in every sport she’s playing.

"She’s in shape all year because she’s in the weight room more often than other players. I think sometimes she may take on a little too much — I worry about her burning out — but she just always has to be playing a sport. I’m just so happy to see her succeeding.”

Despite Rice seemingly filling her life with sports, she is passionate about a few other things as well off the court. She wants to major in accounting in college, but one hobby, in particular, sewing, has also intrigued Rice. She said she's made two blankets since the start of quarantine.

She’s also the team’s comedic relief. And has an obsession with shoes.

"Kayla is just so goofy, she’s probably one of the goofiest girls I’ve ever been around," Gray said. "She is so funny. She also has terrific style. She’s really into shoes and so we kind of have a bond there because she’s always asking me where I got my shoes and joking that I have more than her.

"She’s a terrific kid that I never have to worry about with grades or what she is doing outside of volleyball. She’s dedicated to her athletics and I cannot wait to see where I get to watch her play in college."

Rice will be playing college sports, but which sport is still to be decided. She says she is leaning toward basketball but hasn’t ruled out volleyball. Rice said it will come down to fit, school and how well she can see herself enjoying life outside of sports on that particular campus.

However, she still has a lot to play in her high school career before taking the next step.

"I'm really proud of this team because we lost a lot of big seniors from last year, but we've had a lot of younger players step into roles and now we are really coming together as one," Rice said. "It just shows that anything is possible. I'm looking forward to the rest of the games.

"I really want at least a tie of the conference title. But even outside of that, I'm proud of our record so far. We try our best and always work hard. I'm happy that we have put it together."

Flanagan steps down after one season at Assumption

Frank Flanagan led Assumption to a state championship this season. He won't be part of the program's bid to repeat as he has resigned from the position.

Iowa defeated Illinois for the eighth straight time in the senior all-star volleyball match, but the score was secondary Monday night. Read about the athletes that made it happen:

Two games separated the top three volleyball teams in the Three Rivers Conference's West Division, with Sherrard edging Orion by one game and Monmouth-Roseville by two to repeat as league champion. The three teams also dominated the All-TRAC West squad, combining for 14 selections.

'We'll be remembered forever': Assumption volleyball gets its championship moment

The Western Big 6 volleyball all-conference teams, voted by the coaches, were released Tuesday. Read who was honored:

In his first year as Assumption's volleyball coach, Frank Flanagan led them to an Iowa Class 3A state championship.

Rock Island's Kayla Rice hits an attack over a Moline defender during a match last October in Rock Island.