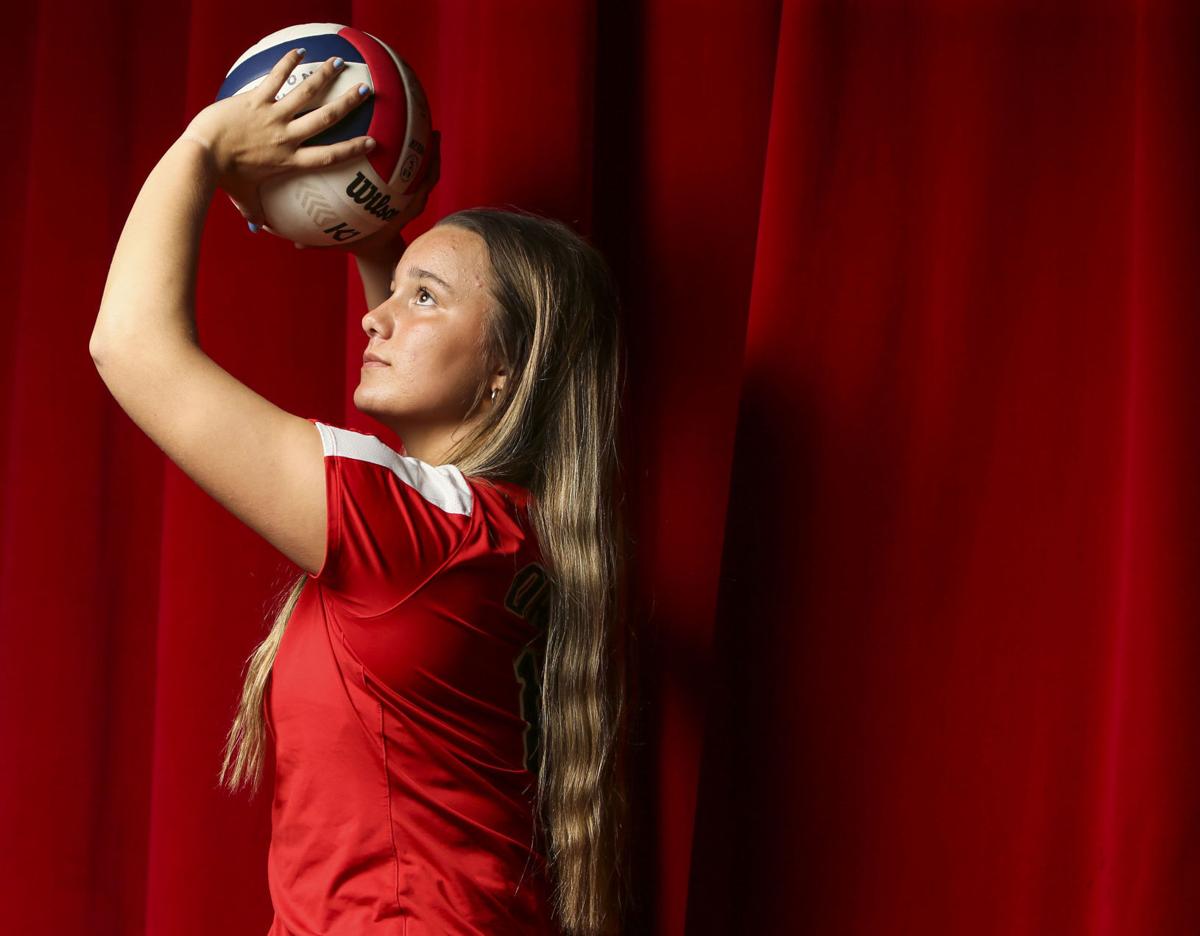 Orion senior setter Ashley Awbrey is this week's Illinois Pacesetter. In 10 matches, Awbrey has 246 assists and 108 digs along with 15 aces. She had 18 assists and 13 digs in a win over Monmouth-Roseville last week, and then followed up with 26 assists and 15 digs in a victory over Galesburg last Saturday. 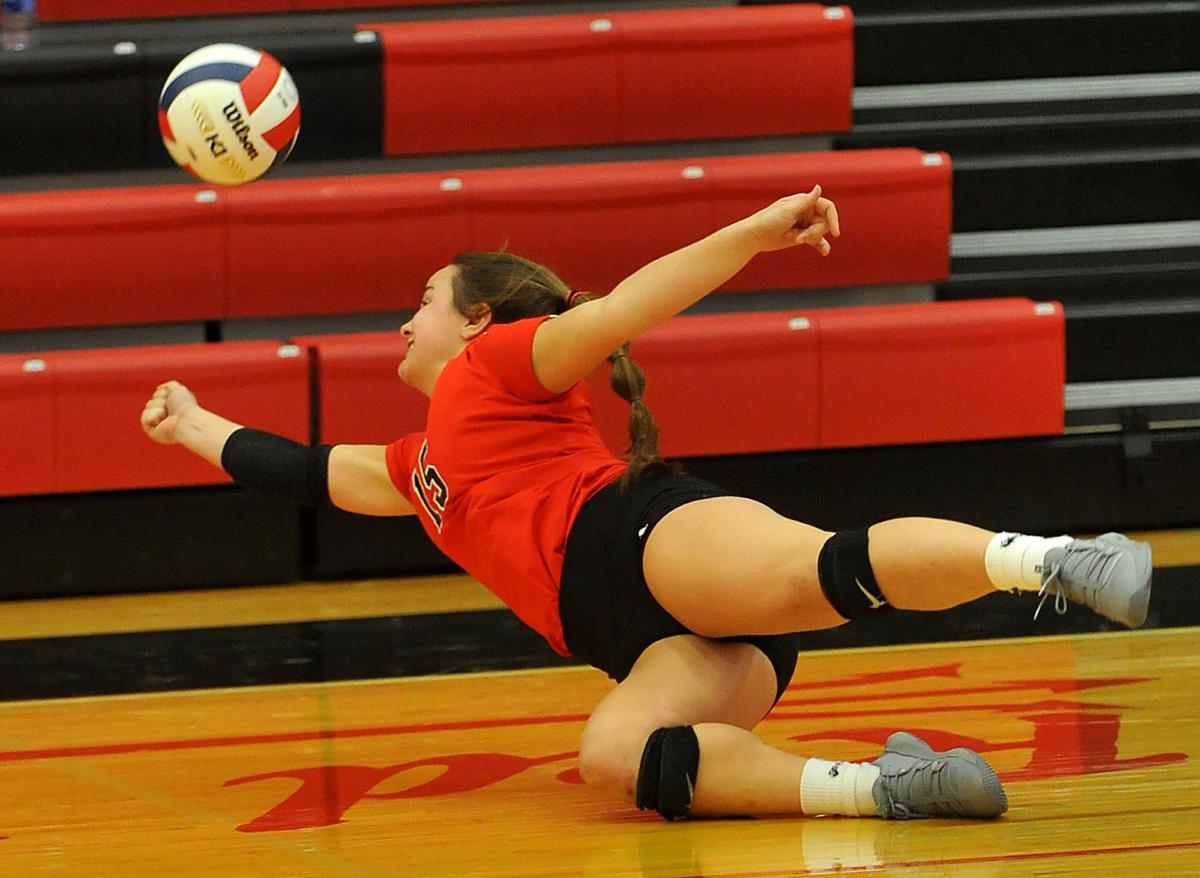 Orion's Ashley Awbrey dives for the ball during the second set against El Paso Gridley two years during an Illinois Class 2A sectional title game.

ORION — After working alongside Faith Catour in the Orion volleyball team's 6-2 setup, senior Ashley Awbrey found herself running the Chargers' offensive engine this spring as the team's main setter.

The lessons Awbrey learned during her first two years of varsity volleyball have evidently paid off handsomely for herself and for the Chargers.

In a pair of victories last week, this week's Illinois Pacesetter continued her steady play both from the setter position and also on defense. She followed up an 18-assist, 13-dig performance against Monmouth-Roseville with 26 assists and 15 digs in a 25-22, 25-19 sweep of Galesburg.

Awbrey has racked up 261 assists and 120 digs to help the Chargers (8-3) make another title run in the Three Rivers Conference's West Division. Going into the final weeks of the shortened spring season, Orion is 4-2 in the league and sits one game behind first-place Rockridge.

"Playing in the 6-2 with Faith last year helped Ashley to step into her role this season," Orion coach Sydney Adams said. "It got her that experience, especially setting for players like Sarah (Jacobsen) and Mackenzie (Grafton). As a senior and a captain, she's also stepped into a leadership role for us.

"With her playing in the 5-1 for us all year, the girls have definitely looked to her, and she does a great job. Not only with her setting and putting up a hittable ball, she does a good job in the back row as well."

Teaming up with Catour in the fall of 2019, Awbrey played a key part to help Orion to a 37-2 finish that included IHSA Class 2A regional and sectional championships.

"Faith and I worked very well together, and we pushed each other to be better," she said. "She pushed me to be the best setter I could be and gave me tips. She was like a role model for me, and I wanted to run the court like she did."

While Awbrey felt that taking on the setting duties full-time was a possibility, she was not entirely certain of it at first. The delayed start to the season due to the COVID-19 pandemic did not help matters either.

"We didn't know for sure what everyone's roles were going to be at first," Awbrey said. "I knew (going to a 5-1 offense) would be a possibility, so I prepared myself for it mentally and physically."

Awbrey knew that part of her responsibility as a senior captain would be to help guide the Chargers through a transition period after graduating several top performers from the previous season's Elite Eight club.

"At the beginning of the season, we knew we had a lot of rebuilding to do after losing five seniors who were the core of our team," said Awbrey, who will continue her volleyball career in the fall at Augustana College.

"At each practice, we took it very seriously. We knew we could start playing at any time, so we had to prepare with what we were given. The first few matches, we worked through some things. Now, we're starting to connect as a team and we're getting into the groove of things. We've got a good team atmosphere going."

Providing Awbrey and her teammates with added motivation to make the most of the shortened spring schedule was the passing of their former head coach, Jack Wheeler, early last fall.

With the coaching staff made up entirely of former Orion players, Awbrey feels that this season has in many ways been a continuation of what Wheeler instilled in the program during his 15 years at the helm.

"Everything Coach Wheeler taught me and the things he said to me, I still use them," she said. "Coach kept his ways consistent throughout his entire time here, so it's nice to see our whole staff coming from Orion, to keep his mentality about volleyball going. In a way, we're still playing for him."

For many years, the volleyball programs at Orion and Riverdale seemed to have claimed exclusive rights to the Three Rivers Conference's West Division championship banner.

The Rock Island High School volleyball team was sharp early in each set on Tuesday night, but a senior-led Geneseo squad pulled away late in each behind aggressive serving to sweep the season series.

GENESEO — More than anything, the Geneseo High School volleyball team was extremely grateful to have had the opportunity to play its season.

ORION — With just two matches remaining in its season, the Rock Island volleyball squad wanted badly to recapture the winning feeling it had just over a week ago.

Sticking to their normal game plan worked to perfection on Monday night as the hosting Moline Maroons volleyball squad topped the Orion Chargers.

It was an emotional end to the COVID-shortened season for Moline Thursday, as the Maroons posted a 25-20, 25-15 victory over United Township at the Panther Den in East Moline.

In the final week of the season, Rock Island volleyball coach Morgan Gray wants her team to simply focus on the first five points and the last five points.

Orion senior setter Ashley Awbrey is this week's Illinois Pacesetter. In 10 matches, Awbrey has 246 assists and 108 digs along with 15 aces. She had 18 assists and 13 digs in a win over Monmouth-Roseville last week, and then followed up with 26 assists and 15 digs in a victory over Galesburg last Saturday.

Orion's Ashley Awbrey dives for the ball during the second set against El Paso Gridley two years during an Illinois Class 2A sectional title game.