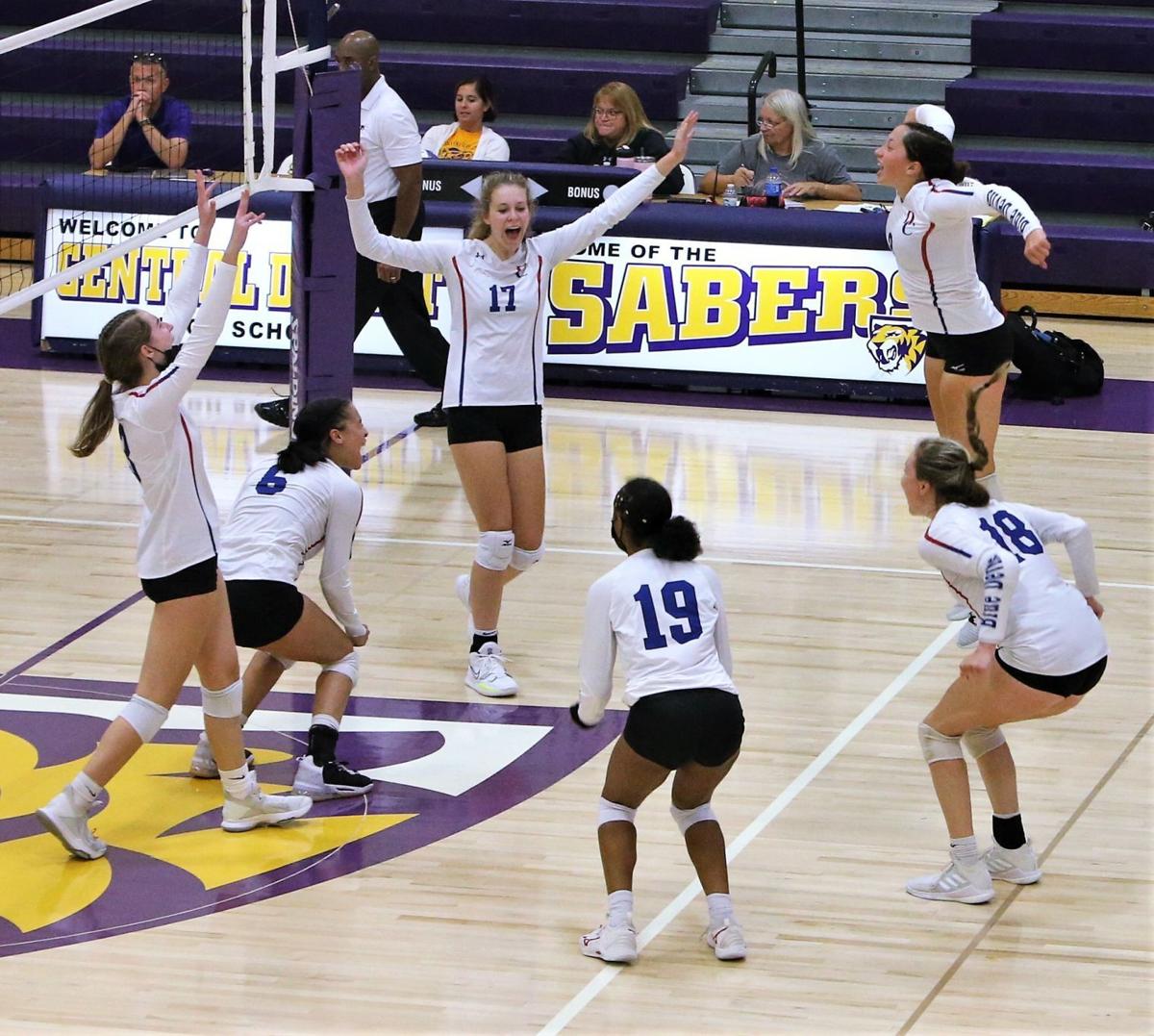 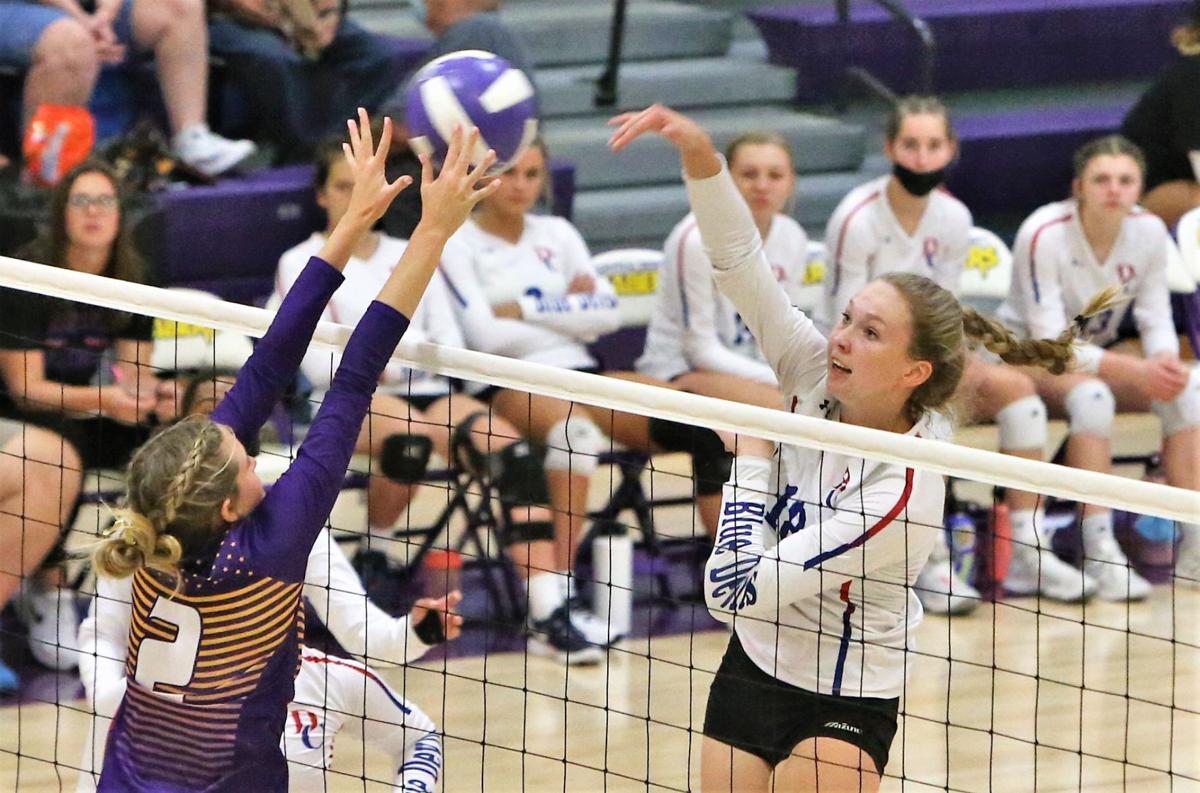 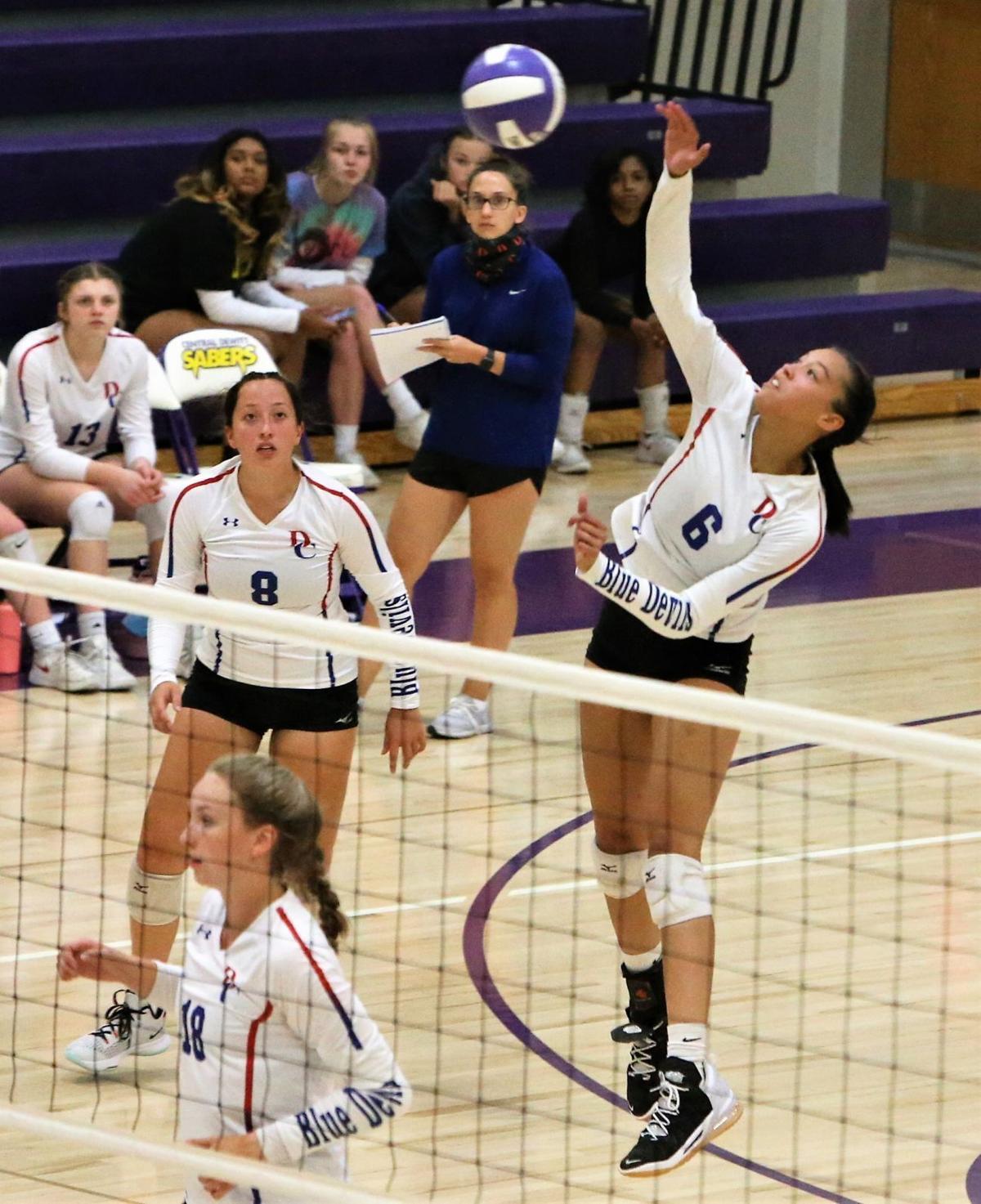 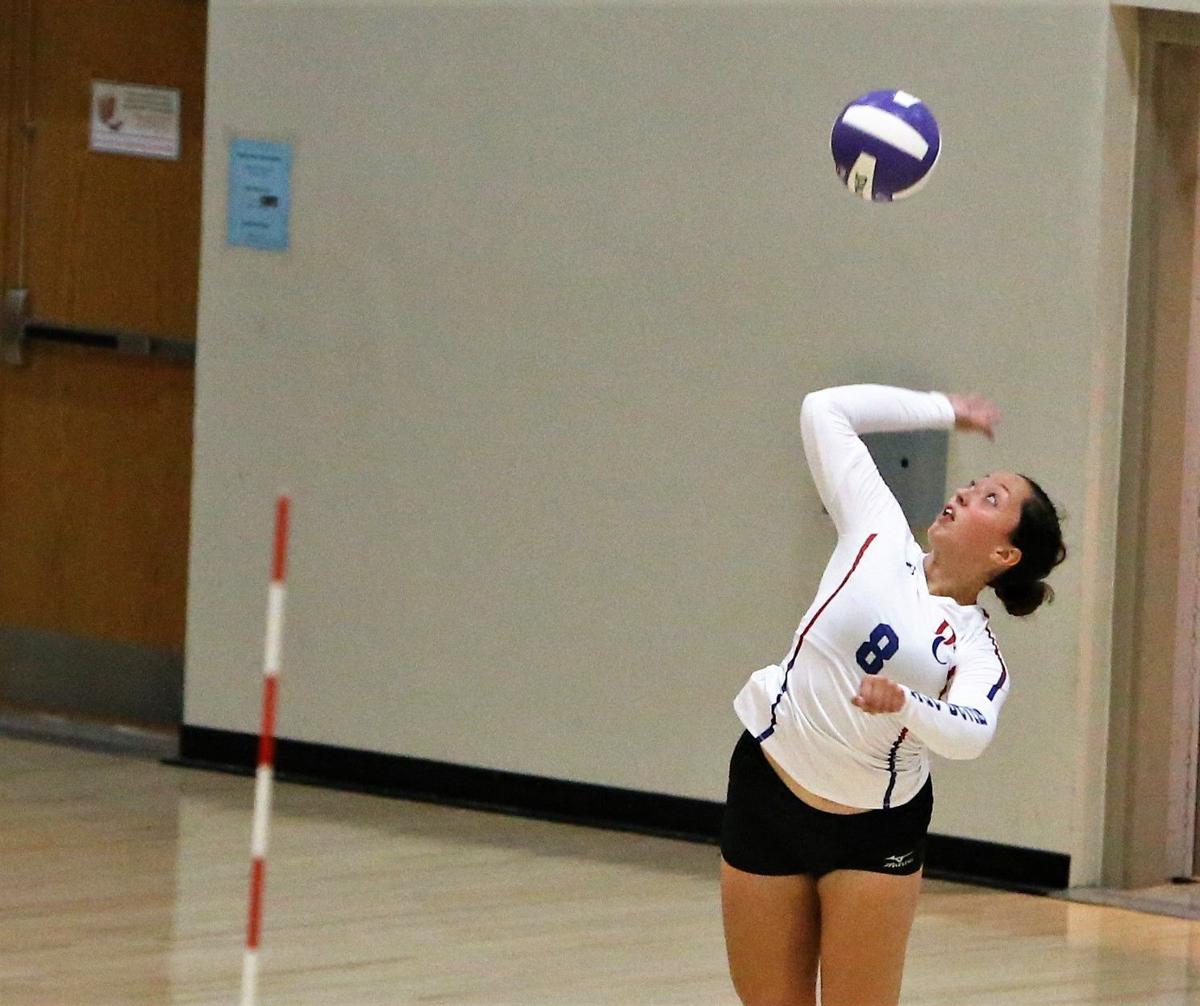 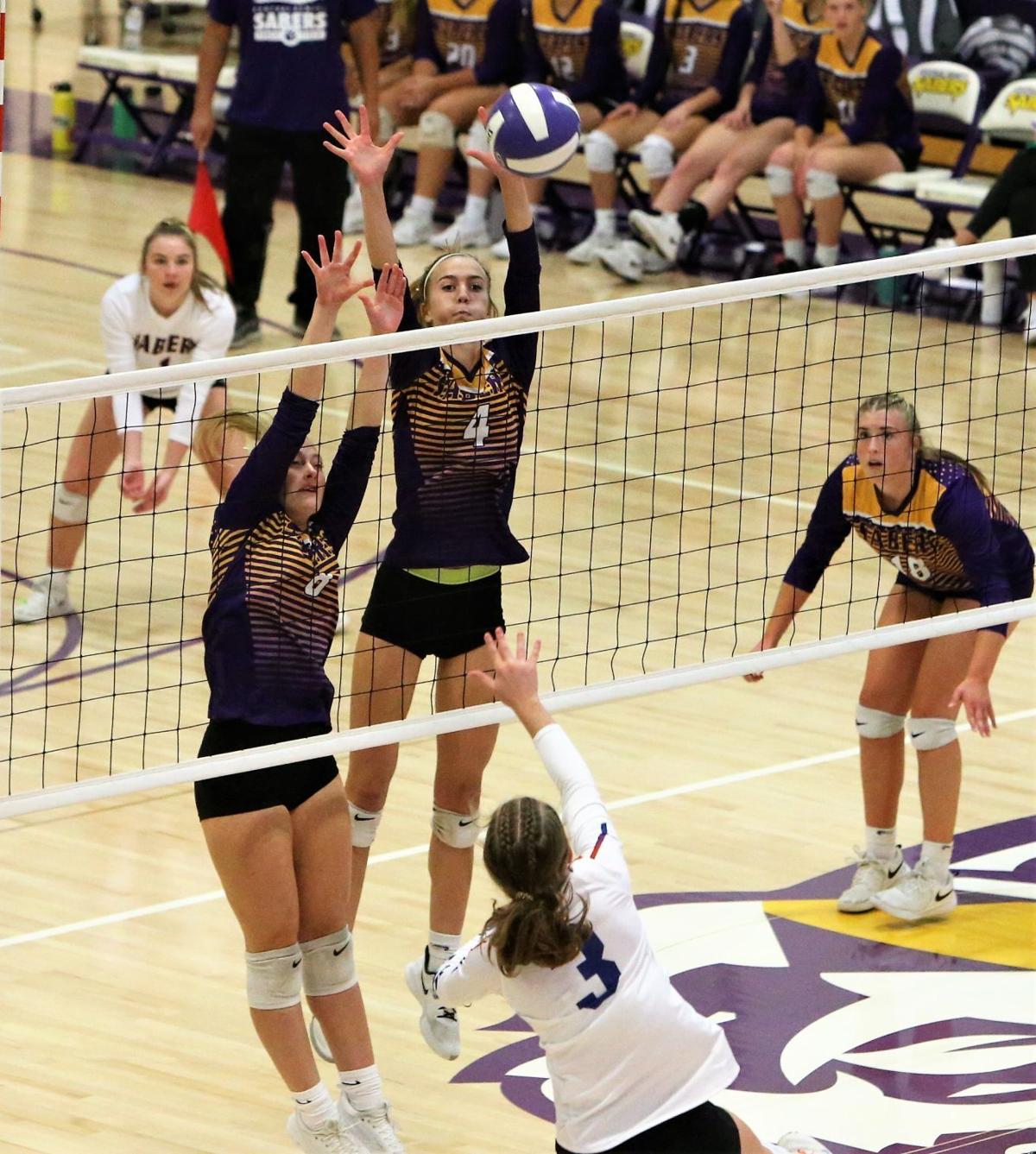 DEWITT — Service errors have been a reoccurring problem for Davenport Central High School's volleyball program the past three seasons. The Blue Devils have ranked last in the Mississippi Athletic Conference in service percentage each of the past two seasons.

“Our coach was like, ‘Hey, you’re going to run a tour every time you miss more than two serves in a game,’” junior right side Delaney Graves said. “Nobody wants to run a tour around our gym.”

"Running the bleachers, that seems to be really effective," Guttmann said.

“Because (serving) has been such an issue, we’ve been really focusing on that this year,” Guttmann said. “We started out strong, petered out for a second and then I’m glad we kept it under control.”

Guttmann said the Blue Devils had some trouble behind the service line early in the season. It has improved as the season has gone along.

“None of us like to run,” setter Lily Campbell said. “Up and down the stairs, it is brutal. We got in shape real fast.”

Central (5-12, 2-3) capitalized on 10 Central DeWitt hitting errors to snatch the first set. The Blue Devils reeled off four straight points and then a 6-1 flurry in another stage of the second set to take a commanding lead.

Guttmann’s team was on the verge of closing it out in three, building an 18-11 cushion, but Central DeWitt stormed back to force a fourth set.

The Sabers, in fact, had a 23-20 advantage in the fourth, but the Blue Devils scored the final five points of the match. Graves had three of her match-high 18 kills in that span.

“I saw they weren’t stopping me at all on my right side,” Graves said. “I kept swinging there, hoping it would go down and it did. I kept going until they decided to pick it up.”

“Credit to (Central DeWitt), they made a lot less errors late in that third,” Guttmann said. “Sometimes, we get in our heads. I’m glad in the fourth set we were able to overcome that because I don’t think my heart could have taken a fifth set.”

Campbell facilitated the offense with 28 assists and had eight kills. Noelle Smith finished with 11 kills and a team-high six blocks.

It was the second consecutive conference win for Central, which didn’t have its full lineup Tuesday and Morgan Barker, a regular in the Blue Devils' lineup, didn’t enter the match until the final set.

“We’ve focused on being tenacious,” Guttmann said. “We’ve been tenacious in the two (MAC) matches we’ve won. We’ve hit our stride, even if we have a different lineup in there. They’ve been really flexible and been able to execute.”

Above all, the Blue Devils are not at the bottom of the conference in serving. They are serving at 86% this season, their best in the past three years.

“This summer during our open gyms, we focused on serving and serve receive,” Campbell said. “We had that stat in the back of our head that we were the worst in the MAC. It was motivation to do our best with serving.”

A look at this year's Quad Cities All-Eastern Iowa volleyball team, which is captained by West Liberty all-stater Macy Daufeldt.

A look at this year's All-Metro volleyball team, which is captained by Pleasant Valley's Kora Ruff and Moline's Ella Ramsay.