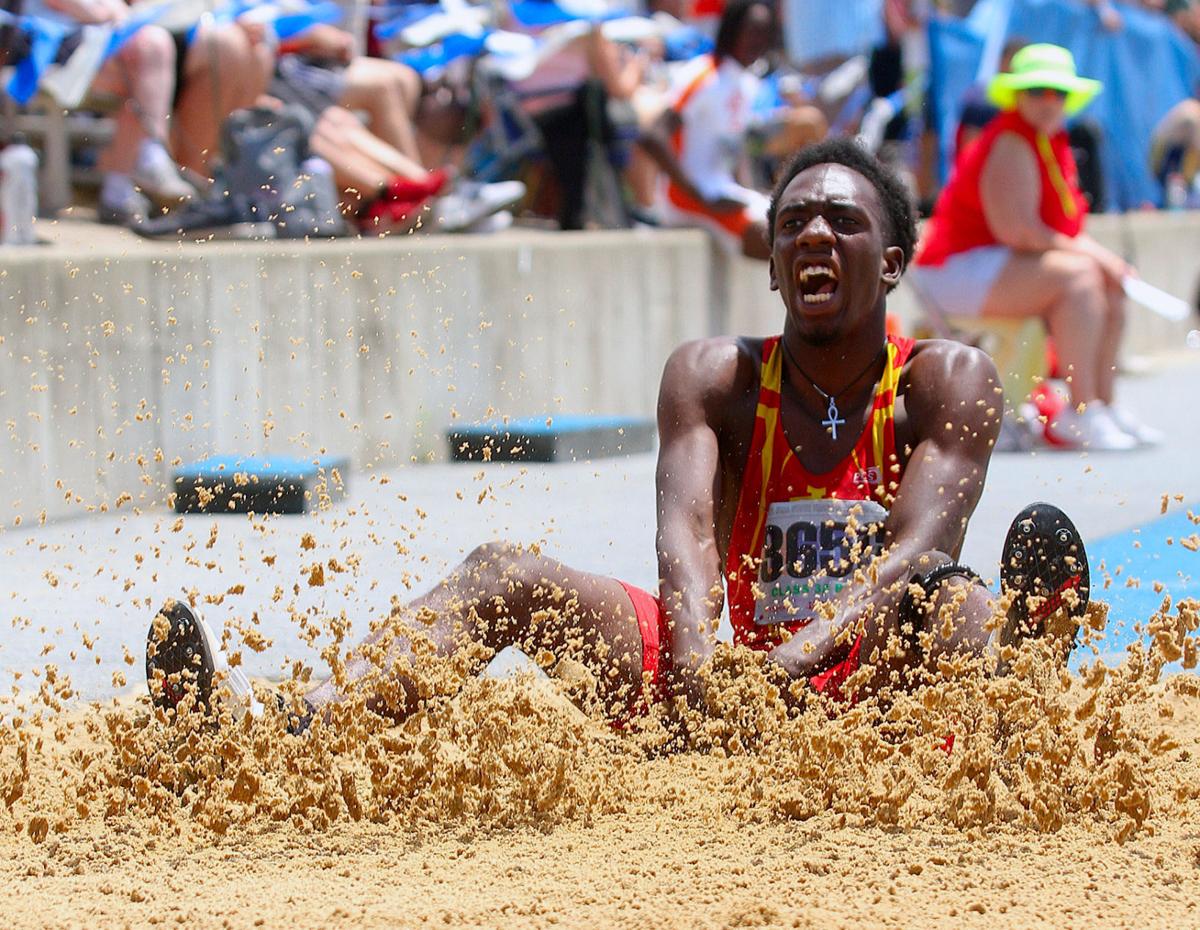 Rock Island's Samson Shakuru lands while competing in the triple jump at the Class 3A boys state track and field meet in Charleston on Saturday. Shakuru jumped 22 feet, 11 1/2 inches to win the meet's long jump title and took seventh in the triple jump. 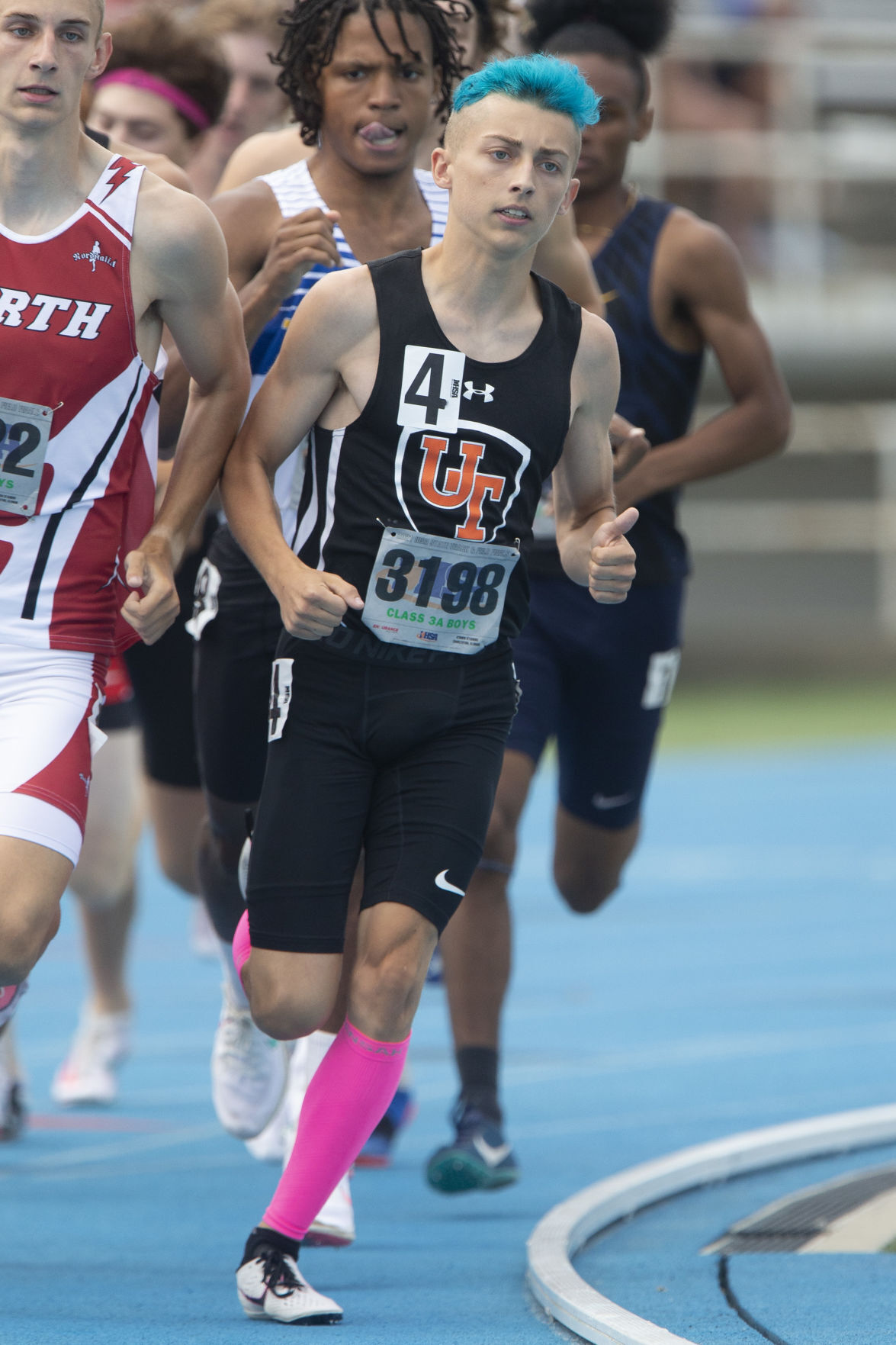 CHARLESTON — It was a long, difficult process for Rock Island jumper Samson Shukuru of Rock Island, but all of his hard work and effort paid off at the end of his high school career.

The Rocks senior jumped 22 feet, 11 1/2 inches to win the 3A long jump state title after coming in ranked 23rd from the sectional jumps. He is the first Rock Island individual champion since 2012 when Derrick Willies took the 110 hurdles championship. The last long jump title for Rock Island was in 1943 from James Holland.

Shukuru, who also ran the second leg of Rock Island’s 400 relay team that qualified for state, said the victory hasn't settled in yet.

“I’ve pretty much been in a neutral state ever since I got here,” Shukuru said. “I’ve felt tired the whole time and haven’t processed it all yet. I was focused on getting through all three of my events, but I’m very happy to win.”

Rock Island jumping coach Pharaoh Gay said no one is more deserving of the honor of being a state champion than Shukuru.

“It’s really special because he’s a hard worker and a great kid,” Gay said. “He’s always positive, and whether or not he’s state champ it was a pleasure working with him over the years.”

After relatively poor performances by his standards at conference and sectionals, Shukuru was just happy to bounce back when it mattered.

“It really means a lot to me, but I know it means more to my coaches,” Shukuru said. “They’ve been pushing me to do this all season and I finally got it done in the end.”

Gay was happy with how his senior athlete pushed through the adversity of a short season and the loss of a junior season because of COVID-19.

“I’m super proud of him, it could have been easy for him as a senior to just be done,” Gay said. “He’s already signed to college so he didn’t need to do this. After the adversity he went through at conference and sectionals, it’s a testament to him and his mental toughness to fight through it all.”

There wasn’t anything special that Shukuru did going into the state final day on Saturday, other than his usual routine and having fun with his teammates.

“It was just a matter of doing everything I do and having a good time with the team,” Shukuru said. “I just needed to be happy and prepared for everything.”

As for the historical significance of his state title, Shukuru was still in shock and very humble.

“Not much to say about it,” Shukuru said. “It just feels really good to win.”

Shukuru also captured a second medal on the day, taking seventh in the triple jump.

The Rocks' 400 relay team placed 23rd in the state after a drop going into the final leg of the race.

Elsewhere in the Western Big 6, Logan Veloz of United Township finished 13th in the 800 after leading the first lap of the final heat. The runners in that race made big pushes at the end and took over from Veloz. Veloz's Panther teammate, Adreian Roper, placed 12th in the high jump.

After his first experience at the state meet, Veloz learned a valuable lesson for his 800 and now has a gauge for what he needs to do going forward.

“I went out running like how I did at sectionals, but everyone else in the field went out there to win,” Veloz said. “They had a good kick at the end and now I know what I need to work on to come back here next season.”

Rock Island's Samson Shakuru lands while competing in the triple jump at the Class 3A boys state track and field meet in Charleston on Saturday. Shakuru jumped 22 feet, 11 1/2 inches to win the meet's long jump title and took seventh in the triple jump.