This week's Illinois Pacesetter is Reese Williams. The United Township High School junior tennis player is off to a 6-1 start this season. 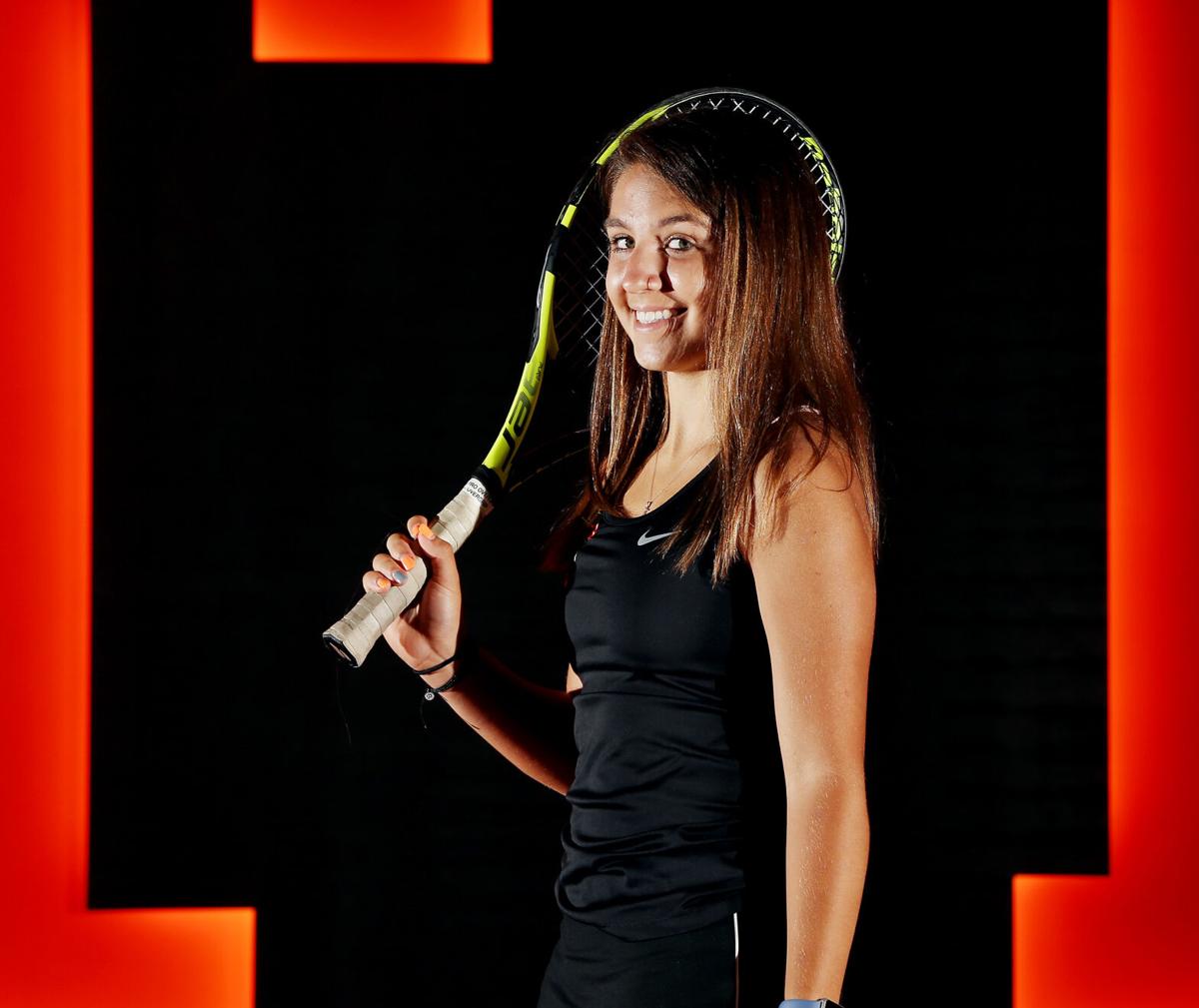 Reese Williams wants to be the type of tennis player her opponent is intimidated by.

Following an offseason schedule of consistent practice and lessons, the United Township singles player is well on her way, playing some of her best tennis yet to start her junior campaign.

Williams, this week’s Illinois Pacesetter, is off to a 6-1 start in singles. Her only loss came against a fellow returning state qualifier — Bloomington’s Mariel Runyan — at last Saturday’s Pekin Invitational.

Williams beat Pekin’s Amara Howell 6-4, 6-3 to place third at the invite, which featured a blind draw. Runyan went on to place first.

But the benchmark win this year so far for Williams came last week, when she topped Moline senior Monika Birski, 6-1, 6-3, in a dual match at UT.

As someone who is determined to be one of the top players in the area, getting a win under her belt over Birski felt significant.

The two had a pair of competitive matches last year, including Birski’s close, three-set win in a dual matchup between UT and the two-time defending Western Big 6 Conference champions.

Birski won 6-2, 8-6 in a Class 2A sectional matchup last year as the third-seeded Williams went on to finish third.

This year’s win was Williams’ first over Birski, who was runner-up at both the sectional and Big 6 meets to players that have since departed. Williams was fourth in conference singles last year.

Williams has been driven to take the top spot herself this year.

“I want to be the next top player in the conference,” said Williams, who acknowledged recent local standouts she’s competed against like Birski and Alleman’s Lily Schoeck.

“They’re the type of players that when you hear about their record and how they are, the other opponent gets kind of nervous or starts thinking about them and how they play. I want to be that player they think of in that way. I want them to be intimidated.”

Williams broke out as a freshman when she was UT’s first girls state tennis qualifier since 2010 and the school’s first singles player to qualify since Isabel Araujo in 2003. Though she is still after her first win at state, she’s reached uncommon territory in recent decades for UT as a two-time qualifier in tennis.

Williams comes from a competitive family, whether it’s a game of Uno or otherwise.

Her dad, Brian, was a state wrestling qualifier for UT and wrestled at Nebraska. In 1988, he received the Don Morris Multi-Sport Award, which annually recognizes the top student-athletes in the Big 6. Her mom, Erica (Saller) Williams, went to Rock Island and played softball and basketball at Southern Vermont College.

UT tennis coach Diego Cross said Williams’ game has looked better in multiple areas so far this season. She has played with more consistency, along with a better, more powerful serve and improved net game.

As a junior, she’s also grown mentally on the court and begun to dominate matches at times.

The Panthers are rebuilding with only four returning players, but Williams’ influence has been a plus for the younger players.

“They can see what hard work looks like,” Cross said of Williams, who usually starts hitting before practice even begins. “And Reese always has such a positive attitude, it’s good for the girls to see.”

She adjusted her work habits during the ongoing coronavirus pandemic, starting to practice one to three hours a day. As more courts began to open, her practice time increased and she went to practices four times a week.

She hit with Pleasant Valley player Ethan Lear almost every day, also taking private lessons with Tim Baldridge of the Life Fitness Center in Bettendorf and Curt Schaefer of the Quad City Tennis Club in Moline.

The practice reps have led to better shot consistency and decisions on the court.

“I’m more confident with myself when I’m out there playing than I have been in previous years, so that definitely helps a lot,” she said.

The win over Birski added to that confidence.

“For me personally, it was a really big win, because that’s the match I’ve been working toward and put all those hours in during the offseason,” she said. “Knowing that all those hours of work are paying off really meant a lot to me.”

She knows it is just one win. She must stay focused on one match at a time, no matter the opponent. Even a loss can be used for motivation.

She credited UT’s coaches, Cross, Andrew Brown and Dwayne Brothers, for helping to motivate and guide her to this point, along with the support of her parents.

As she continues to improve, Williams will continue to aim for the top.

“Even if I lose," she said, "just that feeling of accomplishment, knowing that I played my best is really good for me.”

Wednesday briefing: Cloudy and cool, attendance down at RI schools, and warrants issued in Silvis slaying

More rain is on tap for the Quad-Cities along with fall-like weather. Here's the latest National Weather Service forecast.

This week's Illinois Pacesetter is Reese Williams. The United Township High School junior tennis player is off to a 6-1 start this season.