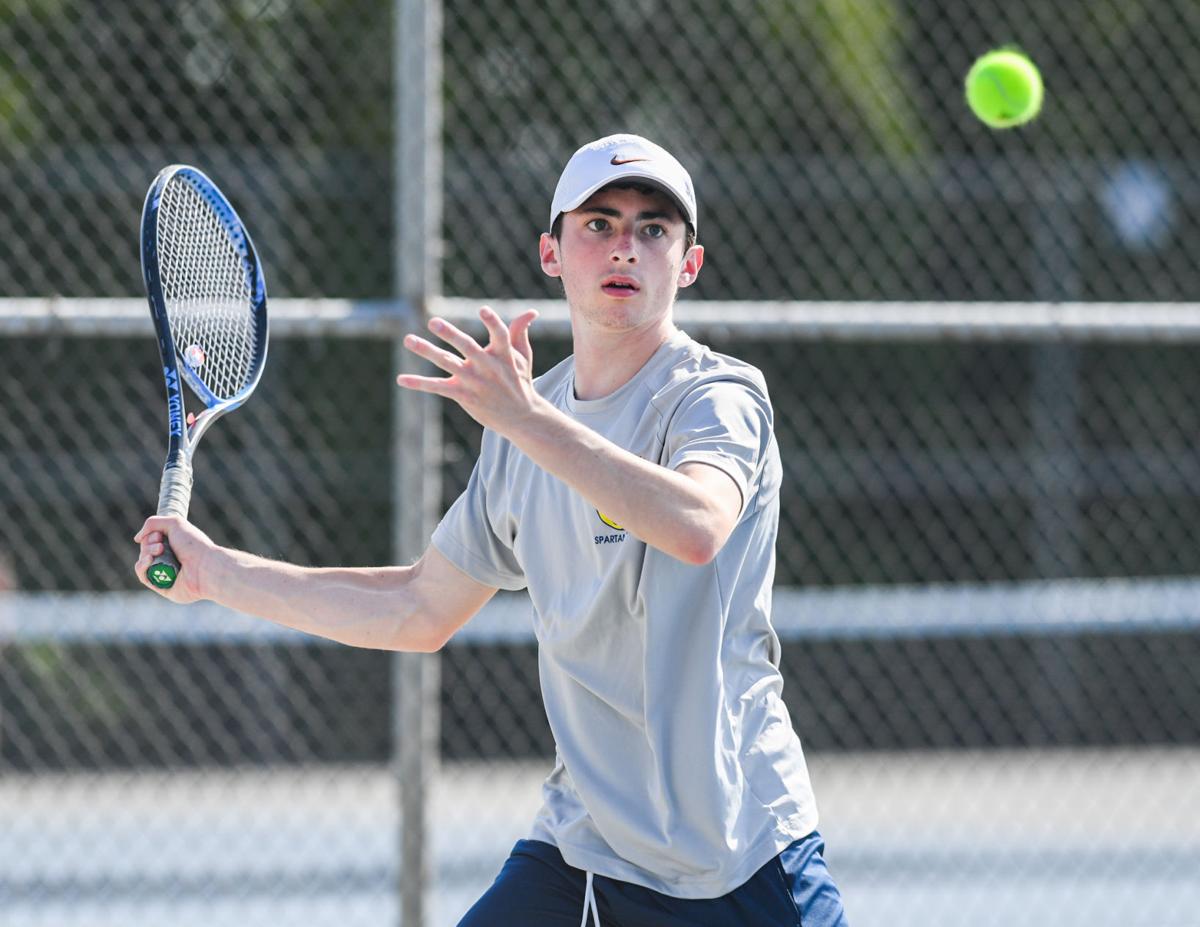 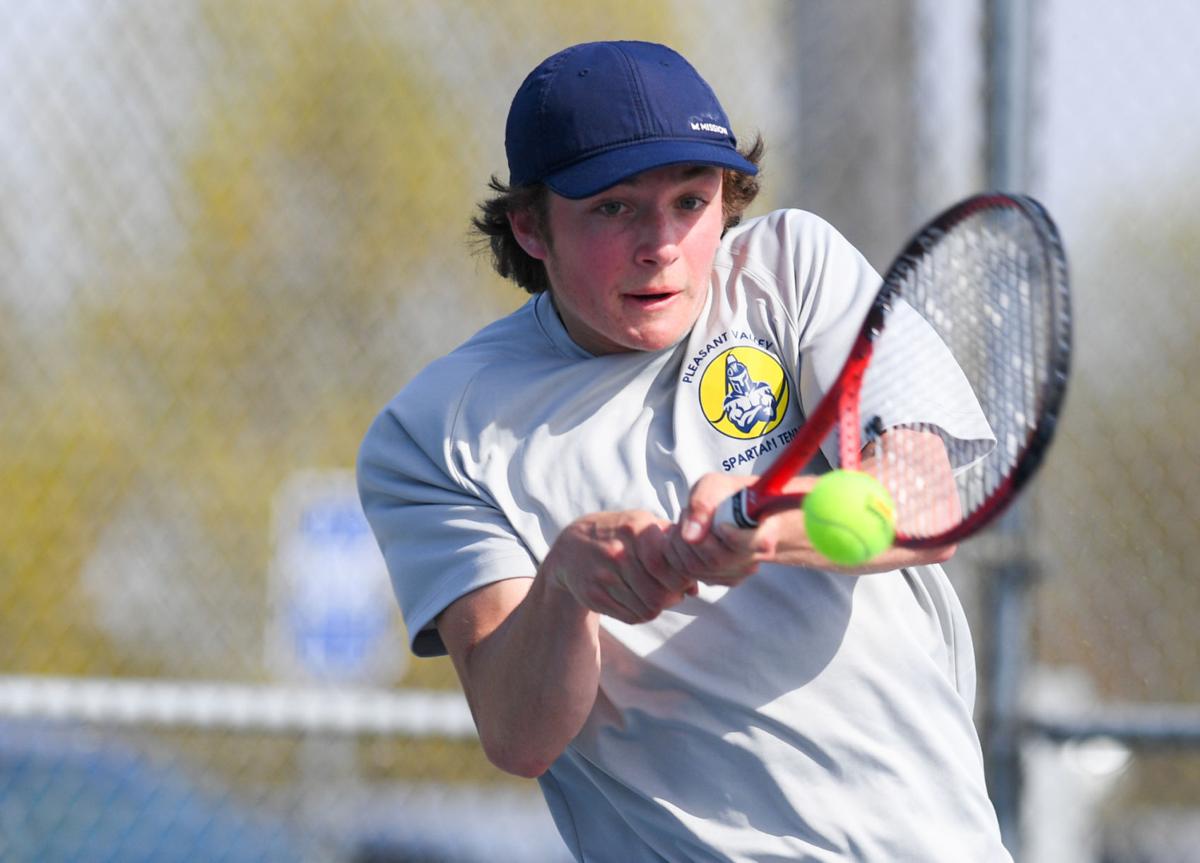 Pleasant Valley’s Brady Adams returns a serve during a singles match against Bettendorf's Jack Reilly during Tuesday's dual. Adams remained on the unbeaten on the season with a 6-0, 6-0 win. 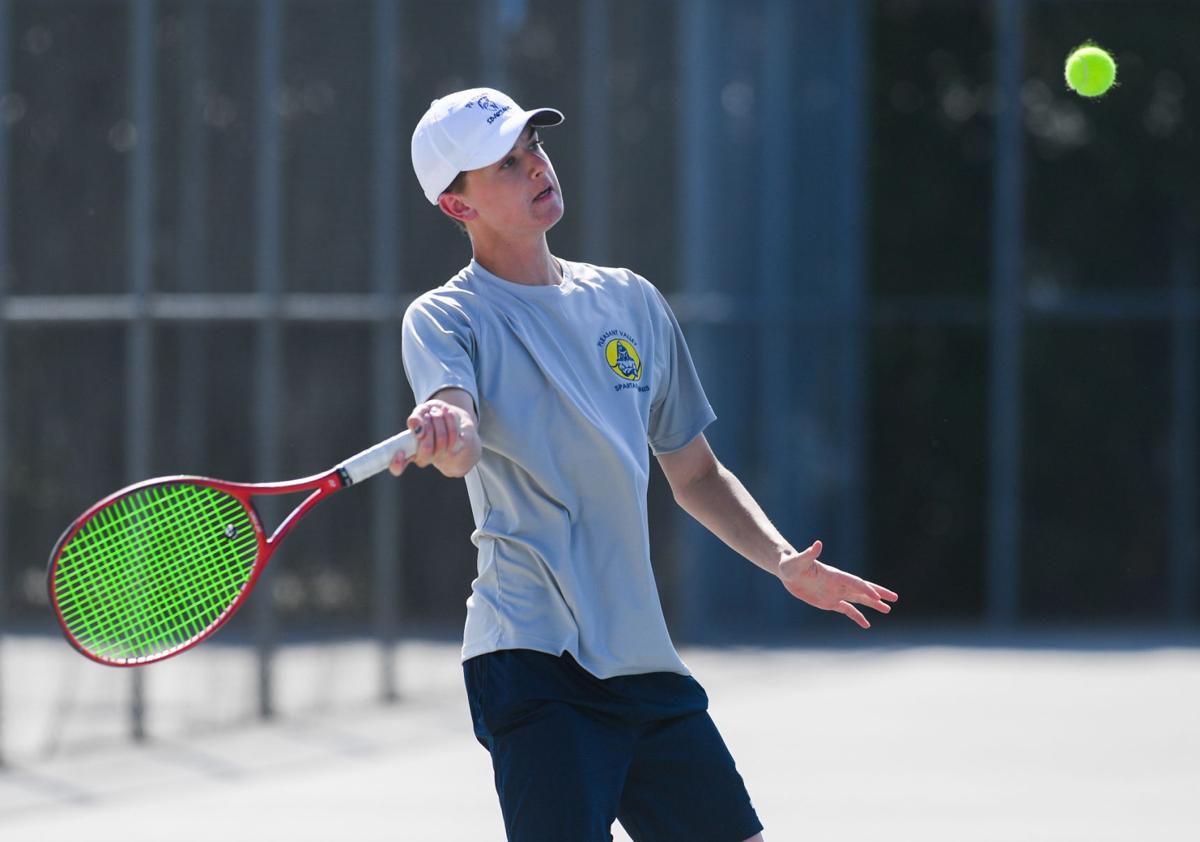 Pleasant Valley’s Nathan Barlow returns a serve during a singles match for their meet against Bettendorf at the high school on Tuesday.

They're extremely deep. They're exceptionally talented. They're highly motivated.

Nobody in the Mississippi Athletic Conference has the experience, skill or firepower to push the Pleasant Valley High School boys tennis team this spring.

Throw in a perfect day at its home invitational last Saturday and a sweep over fifth-ranked Linn-Mar in nine head-to-head finals flights at the Muscatine Invitational earlier this month, PV has overwhelmed the competition.

* PV has not dropped a set in any of the nine flights (six singles, three doubles) this season.

* No MAC opponent has taken more than two games in a set against PV.

Still, Brockhage isn't ready to concede this is the best team he's ever had in his two-plus decades of coaching the Spartans.

"I'd have to reserve judgment on that right now, but this group is certainly in the running," he said.

The third-ranked Spartans will have a better idea of where they stack up on Friday afternoon when second-ranked Waukee comes to PV for a dual meet. Iowa City West, with six team titles in the last eight state meets, is No. 1.

"We have the potential to win a state championship, but we'll learn more Friday," No. 1 player Jake Dolphin said. "It will be a really fun meet to see where we stand against the best teams in the state. We love competitive matches."

The Spartans have 37 players in their program, which doubles and even triples other schools in the MAC.

While Brockhage is an avid supporter of multi-sport athletes, there also is an advantage of having a group of guys with a singular focus.

"It makes the offseason a little easier," Adams said. "It isn't like one of us is off playing a different sport that will take us away from tennis.

The top six, along with a few of the better junior varsity players, spend their winters practicing indoors at the Quad City Tennis Club.

During the summer months, many of them hit the road to compete in tournaments across Iowa and the Midwest.

"Year-round like that, you don't have any time to get rusty or lose anything you've been working on," Dolphin said. "We're all super close friends. We hang out outside of school and it is just fun to play with them."

When Brockhage took over the program in the 1990s, PV didn't have that many players who took lessons or competed in offseason tournaments.

"To really build a program, that's what we've tried to do now, and win at a high level, it certainly helps to have kids that are interested in playing year-round," Brockhage said.

"One through 10, one through 15, we're such a deep team," Dolphin said. "No matter who you play in practice, you're going to get pushed and challenged.

"It makes for a competitive environment."

The scary part for the opposition is PV's top five are all juniors and will return next spring.

Brockhage said two years ago it was the best freshman class he had in his tenure. Now as juniors, they're living up to that claim.

The Spartans were eager to build on that last year, but the COVID-19 pandemic hit in March and the season was canceled.

"One season brings so much experience, and we lost all that," Dolphin said. "It takes a little bit longer to get back into the motion of playing a high level of tennis."

So, while some might point to next year as PV's best opportunity at the school's first state team title, the Spartans believe they are equipped to do it this year.

You can't blame them based on the early returns.

"We would do ourselves an injustice if we didn't have that as a goal this year," Brockhage said.

That is at the top of the goal list.

"We'd love to be the first ones to bring it home to PV," Adams said.

First, it is conquering Waukee on Friday, winning another MAC title next week and qualifying for the individual state tournament in a couple weeks.

Then, it will shift its focus to contending for a team crown.

"Right now, I think Iowa City West, PV and Waukee are the three best teams in the state, but I can't say honestly who is where," Brockhage said. "I also don't know real well how my kids will respond when we hit that other really good team.

"Friday will be the ultimate barometer."

Pleasant Valley’s Brady Adams returns a serve during a singles match against Bettendorf's Jack Reilly during Tuesday's dual. Adams remained on the unbeaten on the season with a 6-0, 6-0 win.

Pleasant Valley’s Nathan Barlow returns a serve during a singles match for their meet against Bettendorf at the high school on Tuesday.