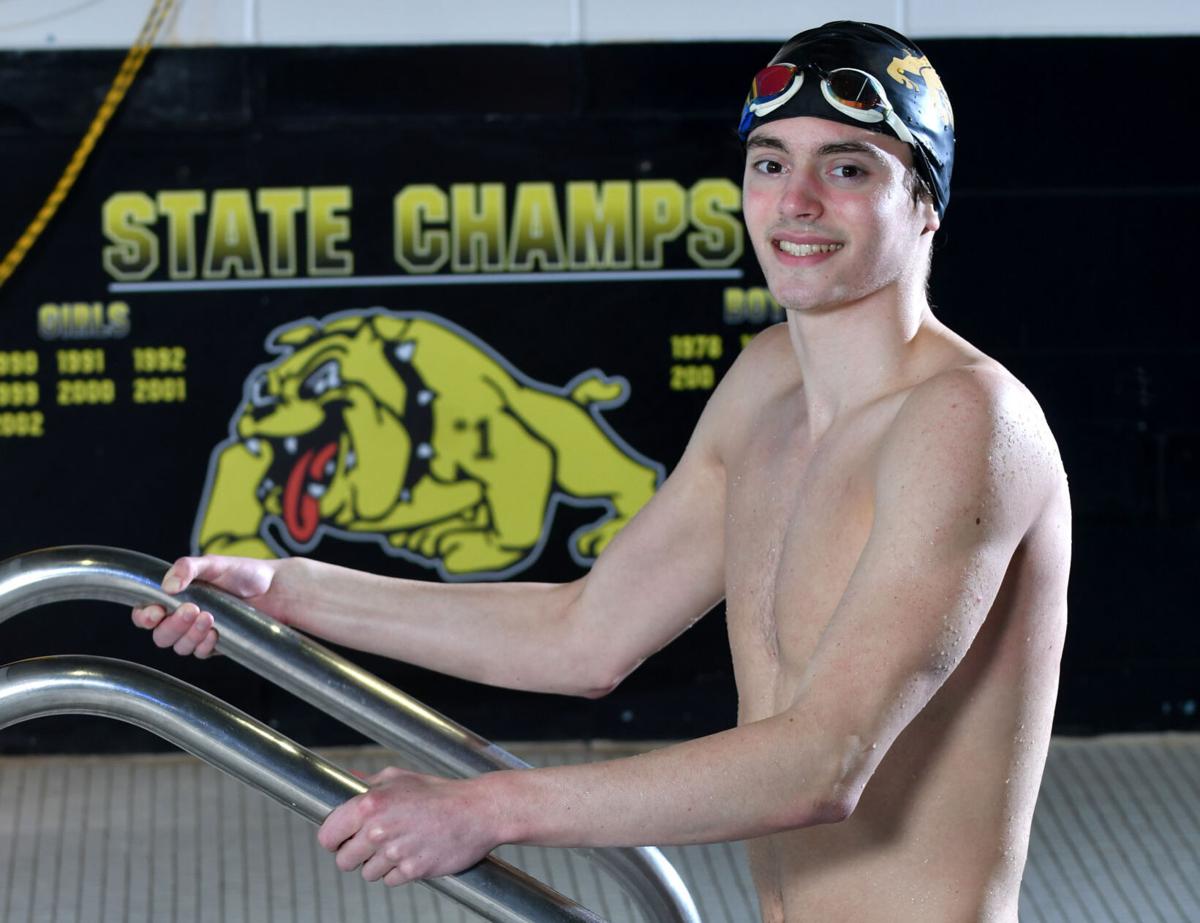 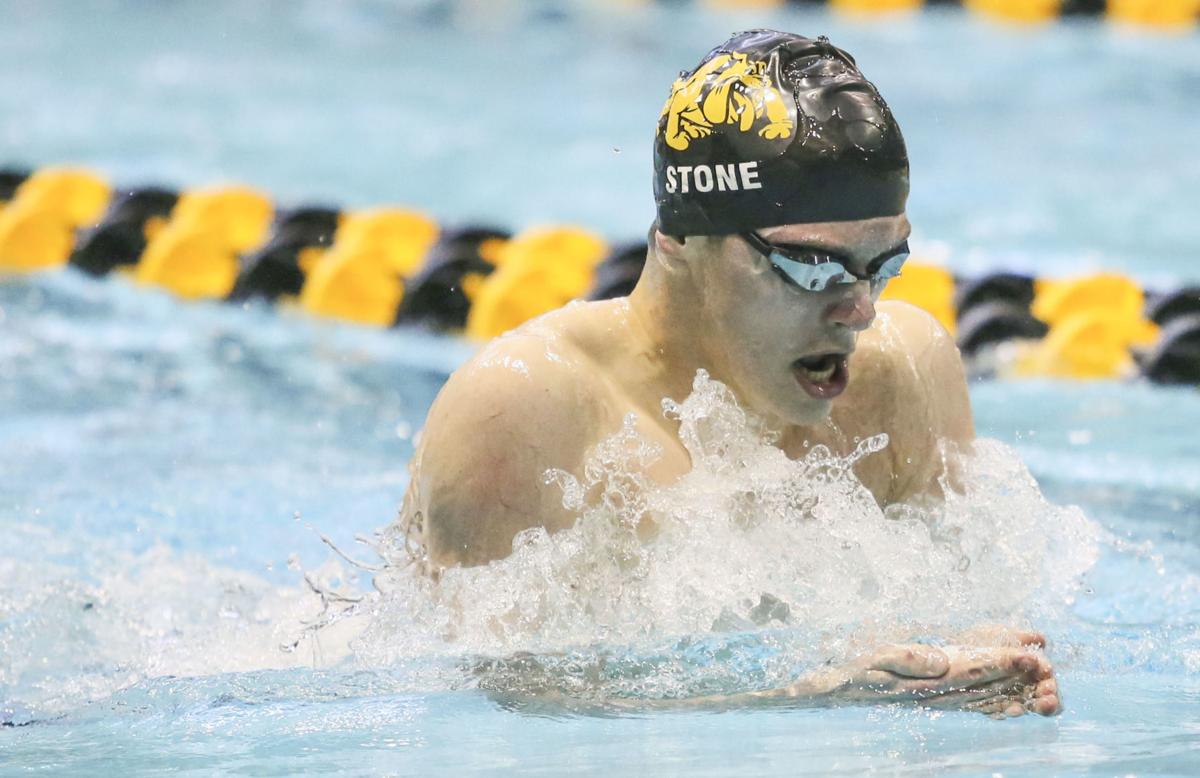 Bettendorf's Alex Stone competes in the 200 individual medley at last year's state meet in Iowa City. Stone has been in the top 10 at the state meet in the seven events he's participated in the past two years. 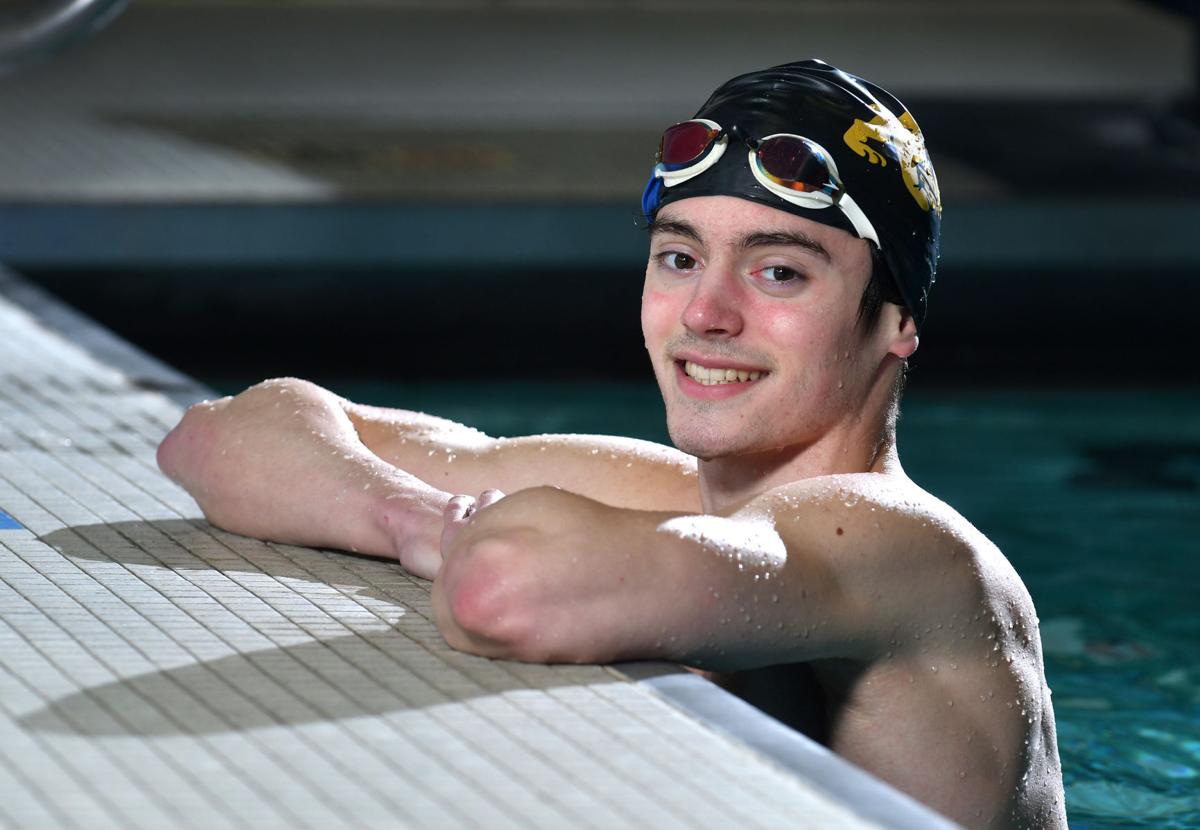 Alex Stone had plenty of role models to emulate when he stepped into the Bettendorf High School swimming program three years ago.

Charlie Bunn, Sam Mitvalsky and Andrew Ottavianelli were upperclassmen who were developing into some of the premier sprinters in the state.

"They set the example," Stone said. "When I came in, those were the guys you would look to as the ones you wanted to train like and people you wanted to race like. Learning from them and seeing how they go through things, how they train and prepare is something I've taken into account."

The torch has been passed.

Now as a junior, Stone has evolved into the face of the Bulldogs' program.

His 50 time of 21.31 at the Dubuque Hempstead Invitational last Saturday was a meet record.

"I think he's going to be a dominant sprint freestyler these last two years," Bettendorf coach Mike Ahrens said. "His body is morphing into a sprinter's body, and he's getting stronger.

"He wants to be the next great one."

As a freshman, he placed fourth at state in the 200 freestyle and ninth in the 500 free. Last year as a sophomore, he was fifth in the 200 IM and sixth in the 100 butterfly.

When the state series rolls around next month, there is a chance he'll do two different individual events than what he's done each of the past two seasons.

"It is cool to be able to step in where I need to step in and perform well," Stone said. "It makes me more confident in my swimming ability I can do this on that type of level."

Stone had immediate success in the Bulldogs' program but often was overshadowed by Bunn, Mitvalsky and Ottavianelli.

He has competed on three state championship relays, including the 400 freestyle that established a state record last year with Bunn as the anchor.

"He's someone who has kind of snuck up on us a little bit," Ahrens said. "He was always around the pool and always in the club, but last year he really made a name for himself.

"Without his third leg in the 400 (free relay), Charlie is not able to catch that kid and we're not able to win it. The neat thing about him is he can swim everything, too."

Stone is one of the Bulldogs' junior captains along with Noah Mitvalsky.

His leadership shines through more with his actions than his words.

"He's pretty soft-spoken and a quiet kid but he is really open to coaching," Ahrens said. "I've never seen him have a bad practice.

"Just positive, polite and goal-driven. He's a dream to coach."

Stone's parents, John and Jodie, put him into swim lessons at a young age. He started swimming club around the age of 9.

As the competitions have gotten bigger, his passion has intensified for the sport.

"I'm a pretty competitive person," Stone said. "Being able to win always feels great and being able to hit goal times is a great feeling.

"Just swimming throughout the years and getting better and swimming against better competition, you have to step up to the plate and give it your all."

For Stone, it starts in practice.

Stone said his mental toughness has improved the most between his freshman season and now.

Swimming is a grind with early morning workouts and long yardages.

"You want to be in a good mindset when you come to practice," Stone admitted. "You know they're probably going to suck and be hard, but if you're in the right frame of mind, you'll feel a little better about it and have a good practice."

Stone has carried that into competition.

The COVID-19 pandemic has thrown a wrench into this season. The Bulldogs had workouts paused and meets postponed for a stretch in December.

"I feel we're in a pretty good spot all things considered," Stone said.

By February, Stone said he and the Bulldogs will be ready for the state series. The district meet is scheduled for Feb. 6 and the state meet will be contested Feb. 13 at Linn-Mar High School's pool.

Like those who have won championships before him, he is ready to etch his name in 'Stone' as one of the program's all-time greats.

"We have a pretty fast history with our program," Stone said. "We take a lot of pride in our program and performing well.

Signature high school moment: "Breaking the state record in the 400 free relay. That was a really cool experience."

Iowa athlete of the year

Bettendorf's Alex Stone competes in the 200 individual medley at last year's state meet in Iowa City. Stone has been in the top 10 at the state meet in the seven events he's participated in the past two years.