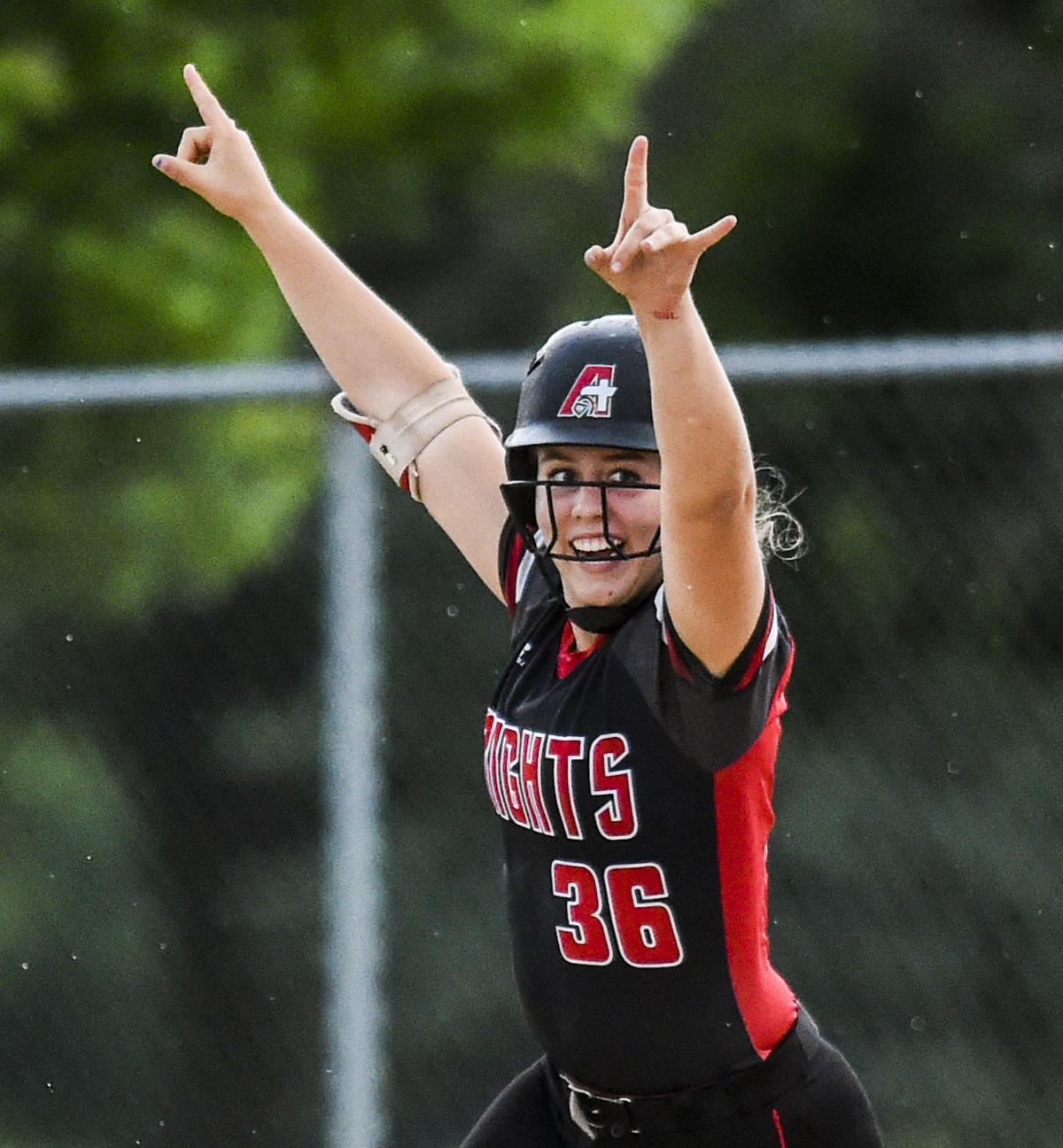 Anna Wohlers raises her arms in jubilation after hitting a home run last season. Wohlers and the Knights are seeking to collect a fourth consecutive state softball title this summer. 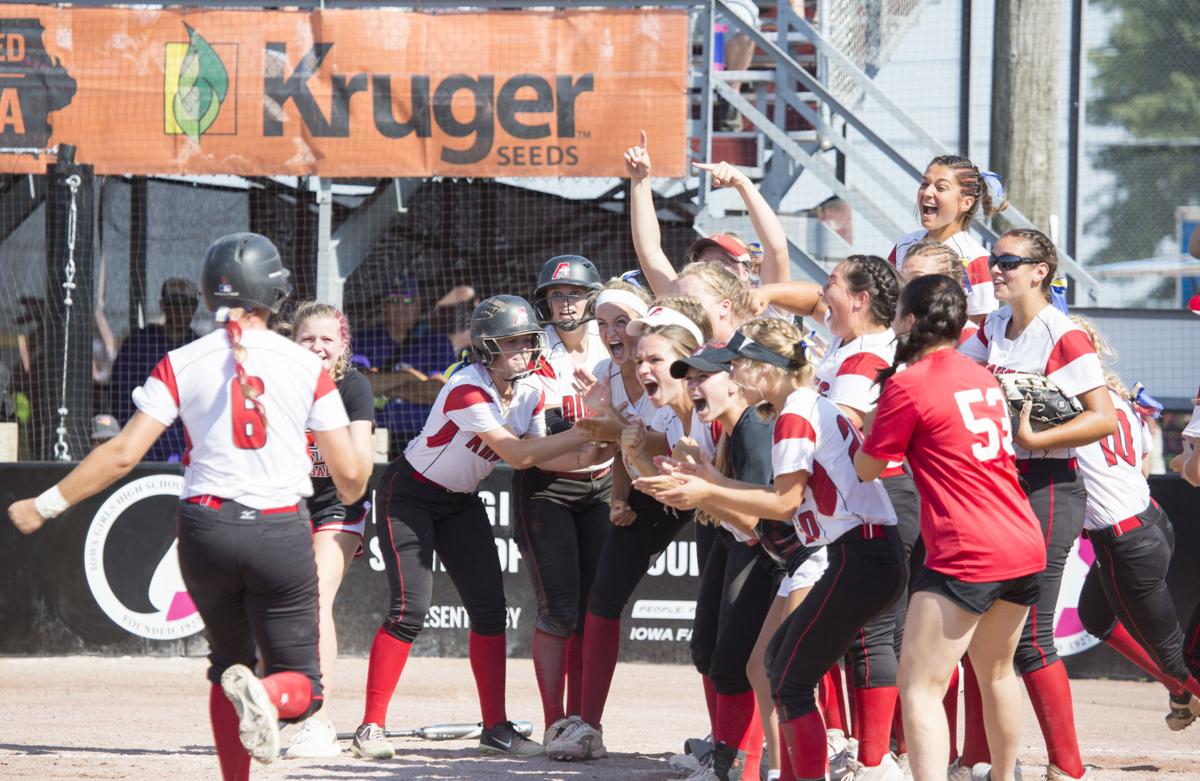 Davenport Assumption awaits Lauren Loken at home plate following her home run in last year's state championship game. Loken is expected to have an expanded role for the Knights this summer at the plate and in the pitching circle. 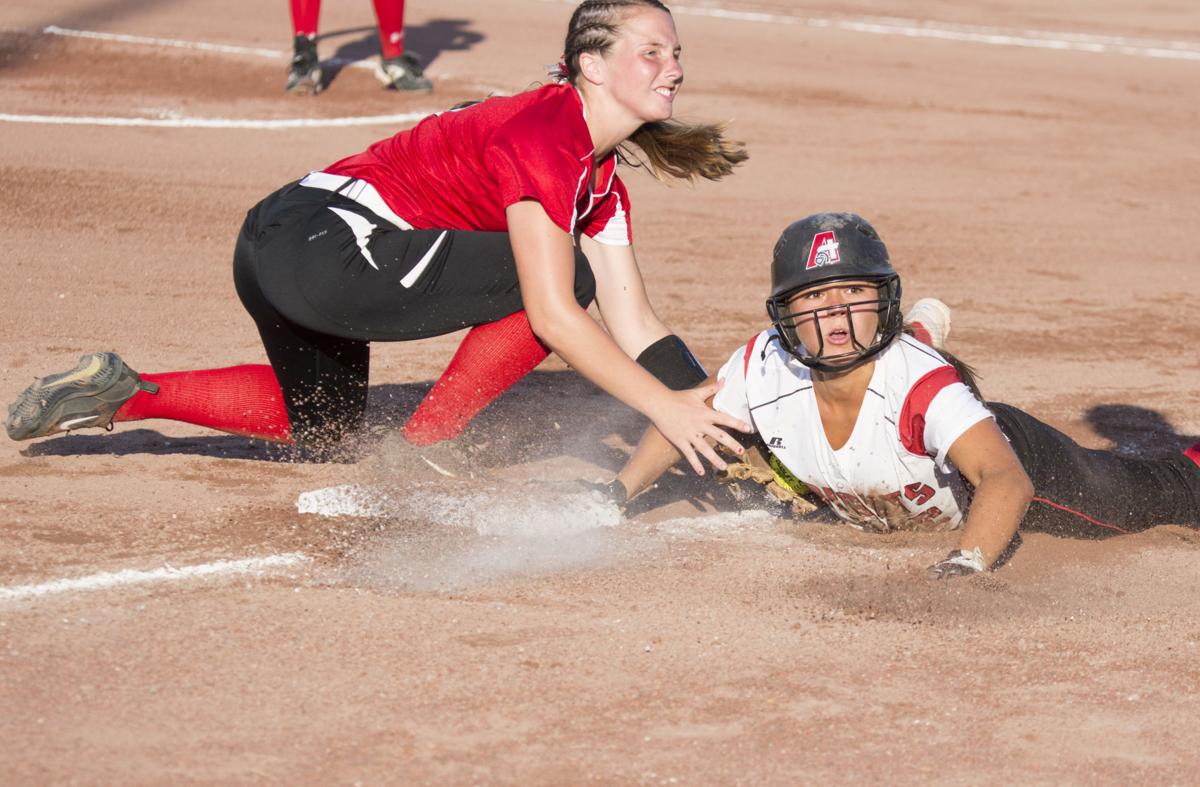 Assumption's Olivia Wardlow slides safely back into third base during a state tournament game last season. Wardlow, an Iowa State recruit, begins her fourth season in the starting lineup for the Knights.

They don’t shy away from the expectations. They don't hide from talking about what is at stake. They don't even mind having the target on them.

Davenport Assumption’s softball program is embracing its chance at history.

Winners of the last three Class 3A state championships, the Knights are vying to become the first Iowa school to capture four consecutive summer state softball titles next month.

“We talk about it all the time,” junior Lauren Loken said. “We want that very badly. That’s what we come to this field every day thinking about and working toward as a team.

“That’s the end goal, the light at the end of the tunnel.”

Since Anna Wohlers and Olivia Wardlow stepped into the starting lineup as eighth-graders, all Assumption has done is hoist the championship trophy at the Rogers Sports Complex in Fort Dodge each July.

During this run, the Knights are 125-6, have been ranked in the top spot in 3A every week of the season by the IGHSAU since the start of the 2017 campaign and outscored opponents 70-14 in nine state tournament contests.

“Being in the organization that long and having so many championship games under us, we know what to expect and what’s going to happen throughout the journey,” said Wohlers, a junior and returning all-state catcher. “We know we’re going to face great teams, we know we have a target on our back and we’ll have great challenges along the way, but we know how to get it done with that experience.”

Now, a program which never had claimed a state crown until the start of this surge has an opportunity to put itself above the rest.

Ankeny, Lisbon and Dallas Center-Grimes are the other schools to three-peat in the summer season. Ankeny won four in succession from 1977-79, but two of those came when there was a fall season as well.

“It is our main focus,” coach Ron Ferrill said. “We want to peak at postseason and accomplish something nobody else has done.”

The Knights are ecstatic just to get the chance. They didn't know until May 20 if there would be a season because of the COVID-19 pandemic.

"Right after spring break when they kept us at home and quarantined, I never stopped working out," senior Carlie Sammon said. "I did everything to prepare for this season, so to get that opportunity to show what I have as a senior means an awful lot."

It also helps the program sustain its momentum.

"We've felt a big part of our success has been our culture and how every year the leaders that graduate help develop leaders and good work ethic behind them," Ferrill said. "You never know if you take a year off if you'll have a gap in that."

The preseason Mississippi Athletic Conference favorites don’t have a defined ace like previous seasons with Nicole and Allie Timmons or Hannah Kelley.

What Assumption does have is the deepest pitching staff Ferrill has had in his five seasons.

“We don’t have that one dominant pitcher right now,” he said. “Going into the first week, we’re going to look to win with pitcher by committee and mix it up.

“If over time, the stats show somebody settles into the No. 1 role, we’ll adjust.”

Loken, Libby Madden, Bella Nigey, Abby Odean, Leah Maro and Molly Roe are the options in the circle. The latter four are underclassmen.

“The big question is, what happens when the lights are on?” Ferrill said. “When they’re in the circle in front of a crowd, are they going to be able to do what they do in a bullpen session?"

Loken has leaned on Allie Timmons, her neighbor and former teammate. She has had recent conversations with Timmons about growing into that role.

“More than anything, she’s helping me get out of my head,” Loken said. “It is easy to talk to her because she can relate to what I’m going through and the mindset involved with that.”

Ferrill admits his team might have to outscore teams more than in the past to prevail. He has an offense fully capable.

Even with the departures of shortstop Nicole Yoder and outfielder Lea Nelson, Assumption returns four starters who hit at least .375 in Wohlers, Wardlow, Sammon and Gracie Jevyak. There are others eager to evolve into a larger role such as sophomore Sydney Roe and junior Katie Anderson.

“We are a very strong and a powerful group,” Sammon said. “About everybody that steps up to the plate this year is going to be intimidating. We do have a lot of new faces, but people are starting to get more and more experience which will make us better as a team.”

Other than sorting out the pitching, the biggest uncertainty is matching the leadership provided from Yoder and Nelson. Ferrill said he has five players in contention to play shortstop and nearly the same in center field.

And with social distancing guidelines in place, there haven’t been the high-fives, hugs or pats on the back to create energy in workouts. More vocal leadership is required, something Ferrill admitted is lacking at those two positions.

"It is a tough thing to develop that confidence in yourself to be a vocal leader without the reps," Ferrill said. "It is great having a lot of athletes, but the downfall is sharing the reps and it is hard to get any one person settled into it where they’re confident enough in themselves to take on a leadership role.”

Even with a condensed season — just 48 days until the state championship game — Ferrill expects his team to look vastly different between Monday's opener against Pleasant Valley and mid-July.

“If one of our six pitchers can become a No. 1 and somebody can take control of the team on the field at shortstop, we’re going to be very difficult to beat again,” Ferrill said. “In five or six weeks, we might be talking about this group as one of the best teams we’ve ever had.”

Here is a look at how the nine MAC coaches see this year's league race unfolding:

Davenport Assumption has needed a spark in the pitching circle this season. It no longer has Nicole and Allie Timmons or Hannah Kelley at its disposal to silence opposing offenses.

Tied at seven with North Scott in the bottom of the seventh inning, Davenport West incoming freshman Hannah Mitchell was tasked with executing a bunt with the potential winning run on third.

Cheek, Lancers show 'postseason potential' in win over No. 2 Falcons

LETTS, Iowa — Ryann Cheek has not had the junior softball season she anticipated for North Scott.

ELDRIDGE — Too perfect is what Christin Hartman was trying to be Thursday night.

Anna Wohlers raises her arms in jubilation after hitting a home run last season. Wohlers and the Knights are seeking to collect a fourth consecutive state softball title this summer.

Davenport Assumption awaits Lauren Loken at home plate following her home run in last year's state championship game. Loken is expected to have an expanded role for the Knights this summer at the plate and in the pitching circle.

Assumption's Olivia Wardlow slides safely back into third base during a state tournament game last season. Wardlow, an Iowa State recruit, begins her fourth season in the starting lineup for the Knights.