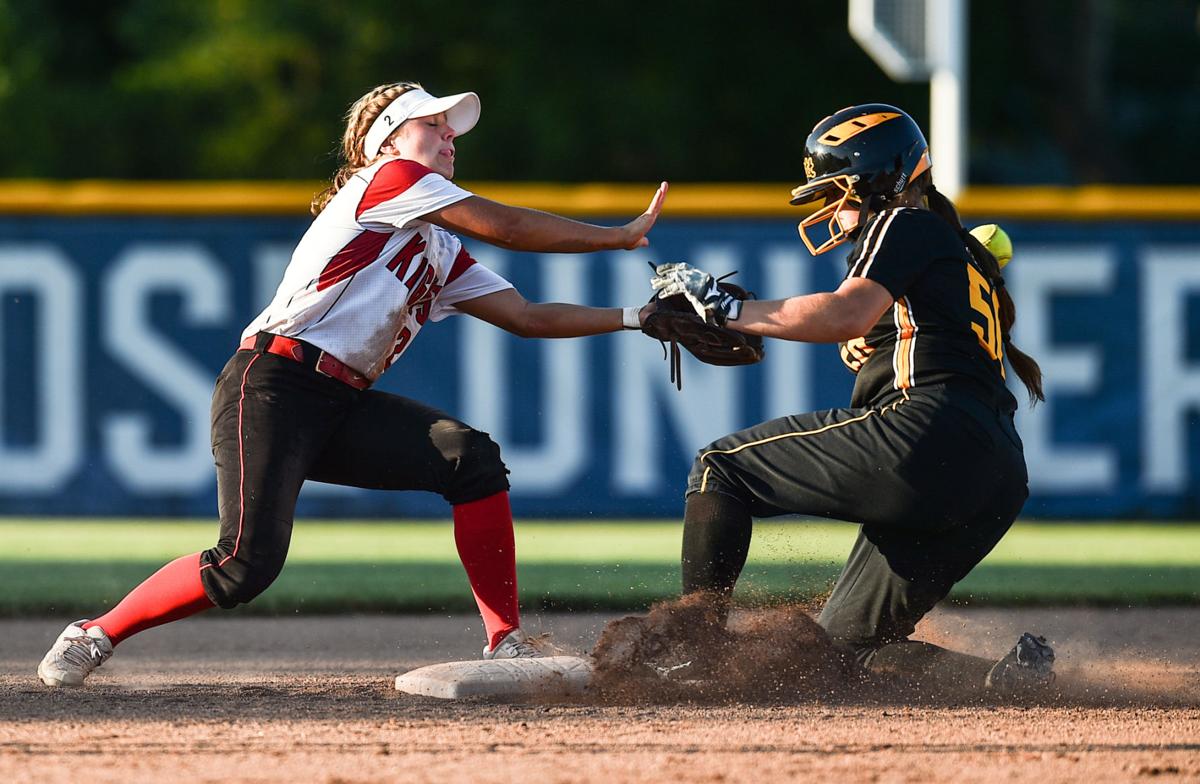 Assumption's Olivia Wardlow attempts to tag out Bettendorf's Alexis Mulvehill at second base during Thursday night's game at the St. Vincent Complex in Davenport. Bettendorf swept the doubleheader, 10-2 and 7-6. 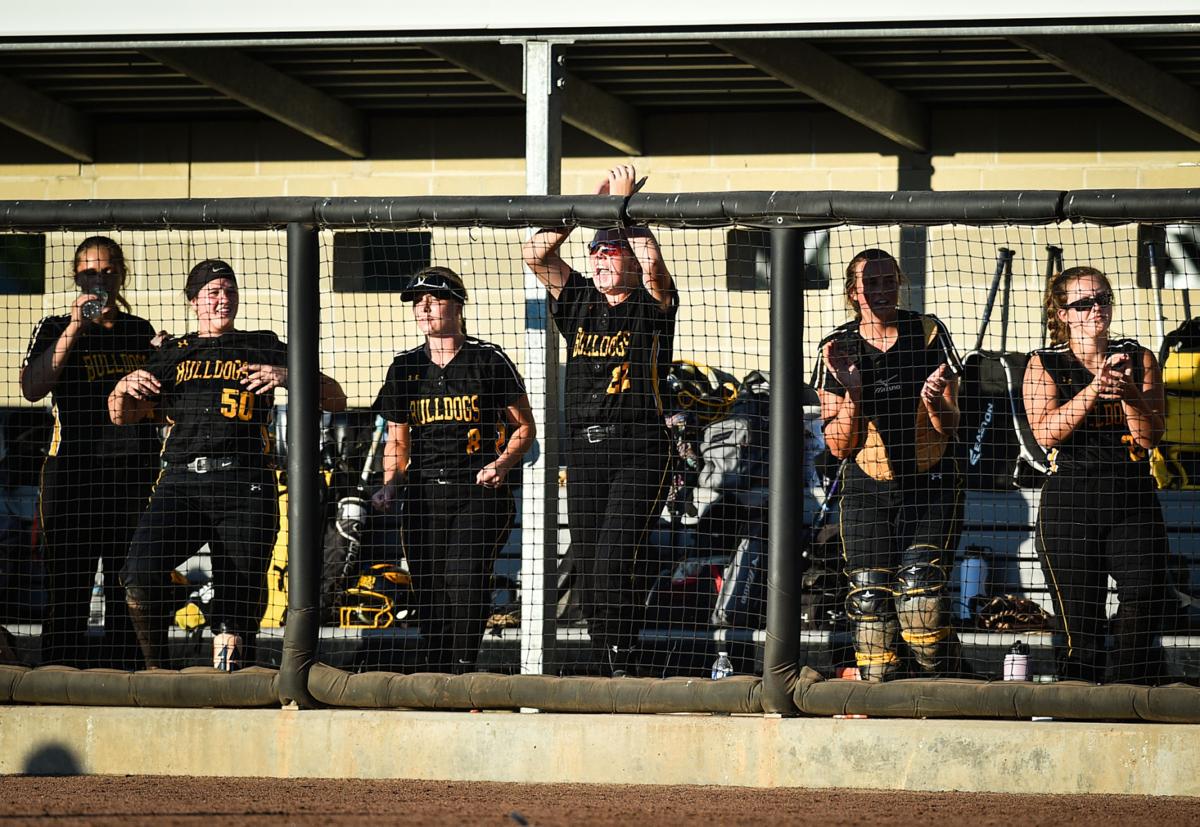 Bettendorf players cheer as the Bulldogs score a run against Assumption during their game at the St. Vincent Complex on Thursday night. 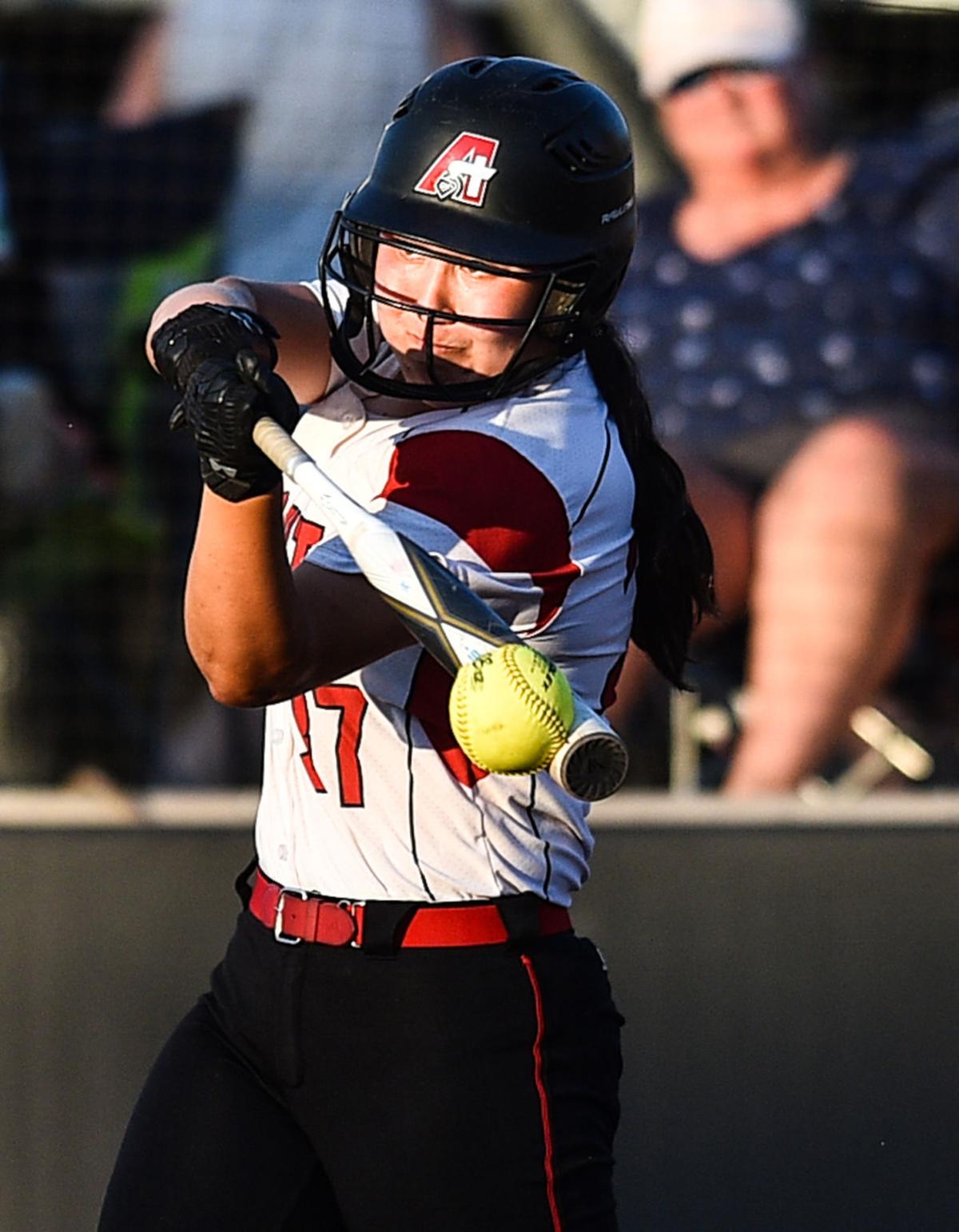 Assumption's Helen Sons bats against Bettendorf during their game at the St. Vincent Complex on Thursday.

So when his Class 5A 13th-ranked Bettendorf squad rolled into the St. Vincent Complex on Thursday night and swept 3A top-ranked Assumption, there was a little more jubilation and satisfaction than an ordinary conference sweep.

“This one meant a lot to us,” Matthys admitted after his Bulldogs defeated the Knights 10-2 and 7-6 in eight innings. “We’re trying real hard to get to that next level. I couldn’t be more proud of the girls.”

Bettendorf snapped a 24-game winning streak for Assumption (11-2, 10-2 MAC) dating back to last season. It also jumbled up the Mississippi Athletic Conference race.

Muscatine (9-1) holds a one-game lead in the loss column over Assumption and Bettendorf (12-3, 10-2). The Muskies play both those teams on the road next week.

“Our big thing tonight was let’s look for one (win) and really grind for two,” outfielder Maggie Erpelding said. “This was absolutely huge for us. We wanted those wins so bad.”

Powered by a seven-run second inning, Bettendorf cruised in the opener. Erpelding was 3-for-3 and on base all four times while Alexis Mulvehill smacked a home run and Emily Rigdon laced a bases-clearing double.

It was more than enough for Rigdon, who held Assumption to a season low in runs. The freshman yielded just seven hits and kept two of the state’s top power threats — Carlie Sammon and Anna Wohlers — off base the entire game.

“That girl, for being a freshman, she’s well beyond her years,” Matthys said. “She hit all of her spots, moved her pitches and only missed a couple times the entire time.

“She did exactly what we asked her to do, changed speeds and kept the ball away. She was like a seasoned veteran out there.”

The Bulldogs rallied to take the nightcap.

After Assumption scored a run in each of the first five innings to snatch a 6-3 lead, Bettendorf mounted a charge in the late innings. Emma Dennison hit a two-run homer in the sixth and Sophia Del Vecchio ripped a two-out double to tie the game in the seventh.

“That (home run) really brought the energy alive in the dugout,” Dennison said. “Everybody was ready to win after that.”

Then in the eighth, No. 9 hitter Olivia Anderson pushed a single back up the middle with two outs to score pinch runner Brooke Magistrelli for the eventual winning run.

“Bettendorf played very clutch,” Assumption coach Ron Ferrill said. “They were dangerous up and down the lineup. I was very impressed with them.”

Ferrill challenged his pitching staff in the postgame huddle. The Knights allowed 19 hits, eight for extra bases, in the two games among their four pitchers.

“Our pitching has been exposed all year,” Ferrill said, “but our defense has made up for it and we’ve played some lesser teams where we were able to get out of jams or outslugged teams.

“Right now, we don’t have a pitcher we know who can go out and pitch well from inning to inning. We have multiple pitchers, but they are missing their spots way more than they are hitting them.”

Assumption’s rugged stretch continues Friday in Ottumwa with games against 3A third-ranked Albia and Ottumwa before coming home to play Muscatine on Monday.

Bettendorf, meanwhile, put itself in the thick of the MAC race.

“I think today showed everybody how good we really are,” Erpelding said, “and what we have to offer.”

FORT DODGE, Iowa — Davenport Assumption whipped Williamsburg on the road in the opening week of the softball season. The Knights smacked four home runs and the game never reached the fifth inning.

FORT DODGE, Iowa — It was a case of pick your poison.

FORT DODGE, Iowa — During the heyday of Dennis Johnson’s coaching tenure, North Scott was a fixture at the state softball tournament. From 1987 through 2003, the Lancers made 11 trips to the Rogers Sports Complex.

FORT DODGE, Iowa — Pleasant Valley’s softball team did something no other opponent has done against Kaylin Kinney this summer.

Carlie Sammon remembers walking into the Rogers Sports Complex five years ago as an eighth-grader. There was a bundle of nerves and uneasiness.

Assumption's Olivia Wardlow attempts to tag out Bettendorf's Alexis Mulvehill at second base during Thursday night's game at the St. Vincent Complex in Davenport. Bettendorf swept the doubleheader, 10-2 and 7-6.

Bettendorf players cheer as the Bulldogs score a run against Assumption during their game at the St. Vincent Complex on Thursday night.

Assumption's Helen Sons bats against Bettendorf during their game at the St. Vincent Complex on Thursday.