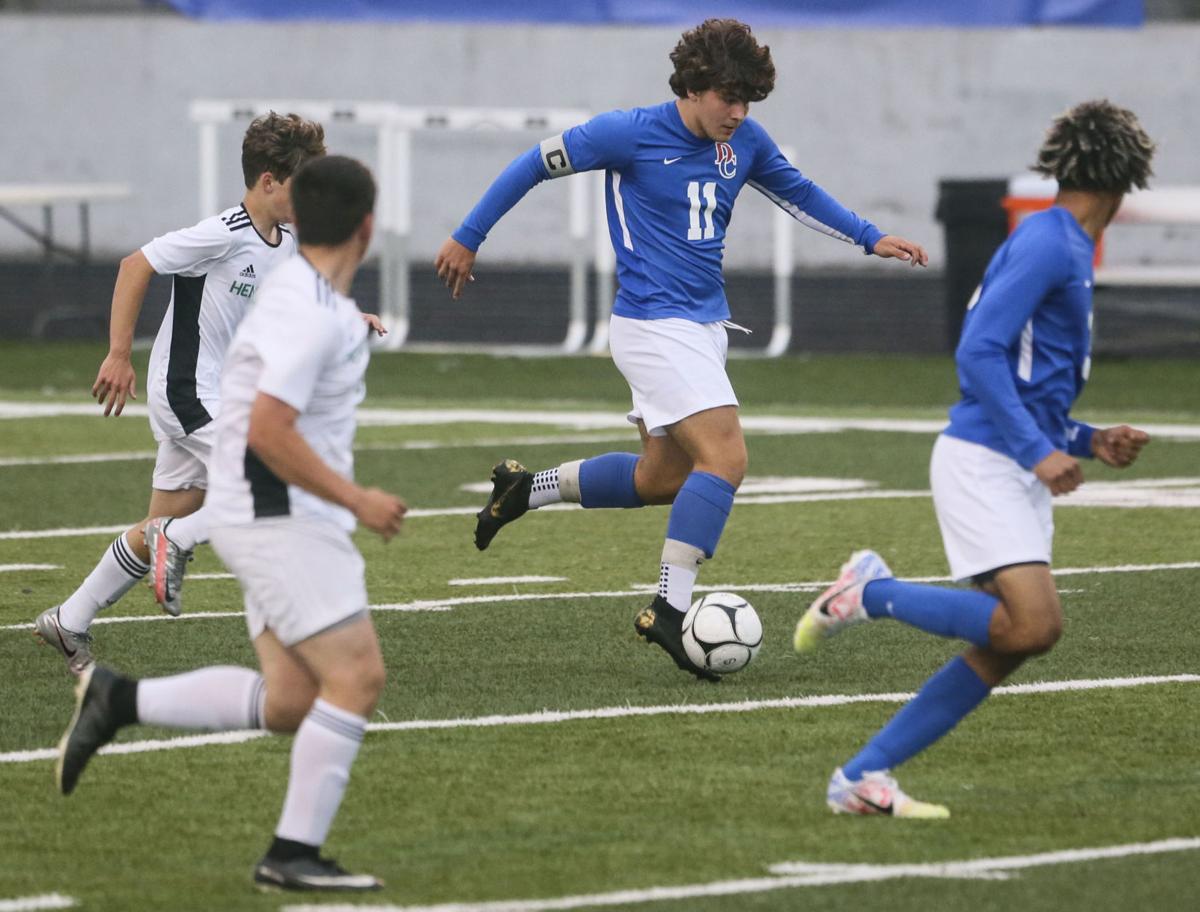 Davenport Central's Nathan Hummel (11) takes the ball down the field against Dubuque Hempstead on Monday night at Brady Street Stadium. 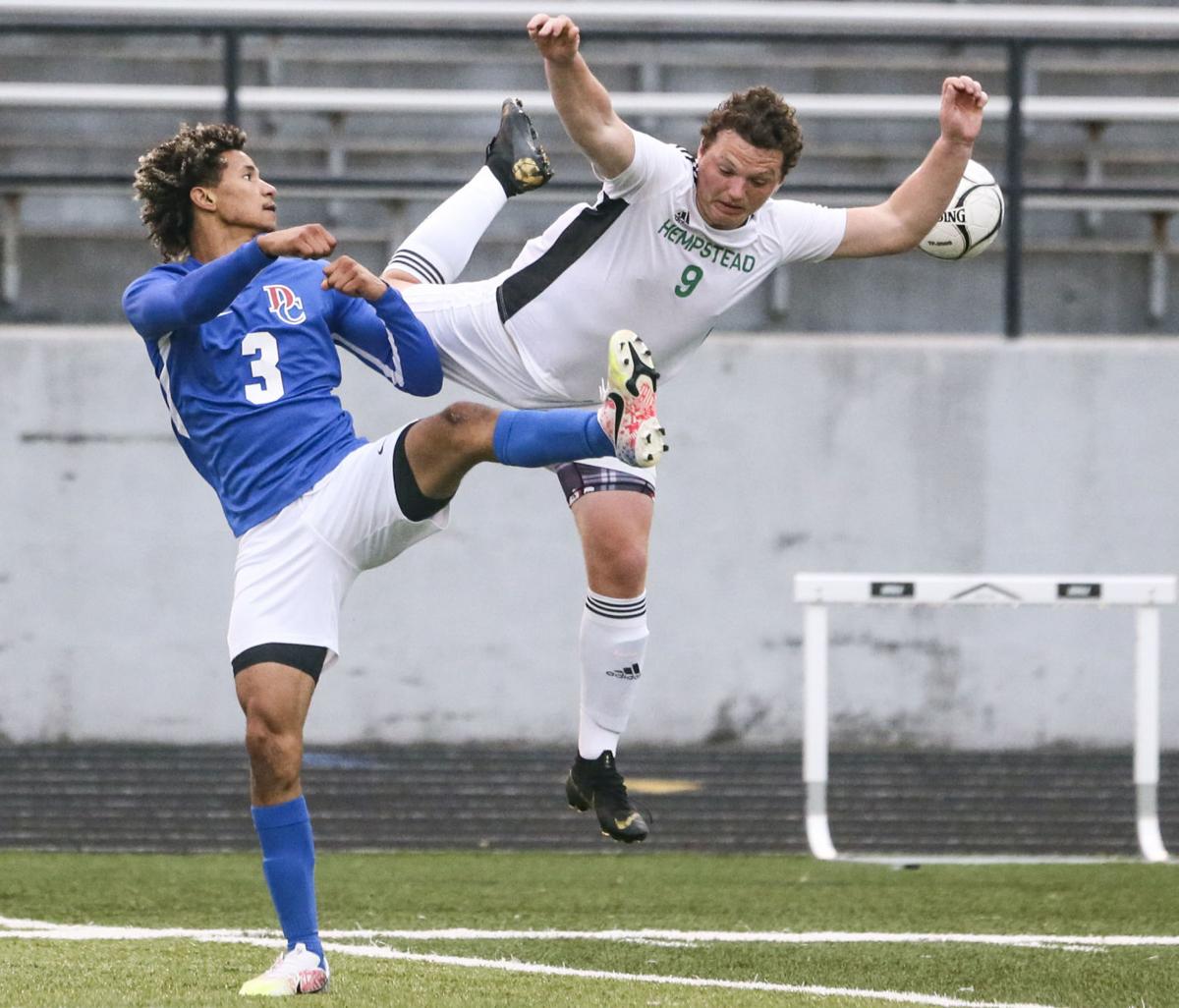 Davenport Central may not be in the race for the Mississippi Athletic Conference boys soccer title this season but the Blue Devils do sport one of the best players in the area.

Junior Nathan Hummel continued his excellent season by putting up three assists and scoring a goal as Central took down Dubuque Hempstead, 4-2, at Brady Street Stadium on Monday night in non-conference action.

Two of Hummel’s assists went to his key running mate, Enrique Diaz, who had a pair of first-half goals. Hummel’s last helper went to Cortez Brown, who scored in the 79th minute to help the Blue Devils (5-6) seal the win after Hempstead (2-8) had cut the hosts' lead to 3-2 in the 77th minute.

Perhaps the most impressive thing about Hummel is his ability to find his teammates with many different types of passes. His first assist in the 10th minute came when he sent a 30-yard over-the-top ball to Diaz, who was open on the wing. Diaz beat Hempstead keeper Marcus Sierra to the far-right post.

Five minutes later, Hummel was on the edge of the penalty area but with his back to goal as he laid off an easy five-yard pass to Diaz, who blasted a shot into the top right corner for a 2-0 lead.

Hummel’s best pass of the game came on a goal that ultimately did not count. After snagging a Hempstead turnover near midfield with 30 seconds left in the first half, he spotted Diaz sprinting down the left sideline.

On the ground, Hummel sent a 40-yard ground pass on wet turf that hit Diaz in stride 15 yards from the goal. Diaz chipped the ball over Sierra for what appeared to be the Blue Devils’ third goal of the game.

But after the officials had a discussion, it was ruled Diaz was barely off-sides.

“I was like ‘Oh man’, I couldn’t believe it,” Hummel said of the decision. “It was still a great run from Enrique.”

In fact, Hummel barely took credit for any of the goals. He praised his teammates instead.

“All my guys are making amazing runs. All I have to do is pass it into space and they are on it,” Hummel said.

“That’s what a leader does,” Munoz said of Hummel. “He is literally the quarterback of our team. I have been coaching a long time and there are not many kids his age that can put those type of passes on a dime.”

Munoz added he’s heard a lot of compliments during the game – from opposing players.

“He made a pass in our first game of the season and a guy from the other team said ‘That was amazing coach’ to me about Hummel,” Munoz said.

Hempstead cut into Central’s 2-0 halftime lead in the 54th minute when Ben Jaeger scored on a free kick from 20 yards out.

But the Blue Devils went back out ahead 3-1 in the 70th minute when Diaz found Hummel with a great ground cross that Hummel finished from eight yards out. Brown actually helped set the play up with a fake run near the ball before letting go to Hummel, who was parked in front of the net.

“I think everyone was really connected tonight,” Hummel added.

But the Mustangs would not quite go away, getting a goal in the 77th minute from Denis Masinovic to make things interesting at 3-2.

But then Hummel showed his strength by gathering a pass out of the midfield two minutes later, fighting past two defenders and while stumbling a bit, sent a ground pass to Brown, who beat Sierra to the left post with a curling shot from 20 yards out.

With Pleasant Valley and Bettendorf already in the rear-view mirror, Central has four games left to keep building and with Hummel running the show, the sky is the limit. The likely toughest remaining test in the regular season is a home game against North Scott on May 17.

“The last few games our offense is really connecting and it is working great right now,” Hummel said. “It was not that way at the beginning of the season but we’ve made big improvements.”

Sophia Utsinger had a pair of goals as Bettendorf snapped a two-game losing streak with a win over Geneseo on Saturday.

Geneseo senior Taylor DeSplinter found the shot she wanted, scoring her team's only goal in a 1-0 overtime win at Moline to stay atop the Western Big 6 Conference standings.

The Davenport North boys soccer team was not going to let this one get away.

Just a few minutes into Tuesday’s home Mississippi Athletic Conference boys’ soccer match against visiting Davenport Assumption, Bettendorf defender Reilly Tabares made a run from the back, took a pass from teammate Tristan Wakefield and scored.

Rock Island and Quincy girls must settle for tie

It took 79 minutes for the Rock Island girls soccer team to get on the board in its game against Quincy on Monday night.

The Alleman offense was as prolific as they come on Tuesday night against United Township in Western Big 6 girls soccer action.

On a cool Saturday afternoon, Moline's decisive 6-0 victory over United Township at the Panther Pitch served as a prelude to a crucial conference showdown with Geneseo that looms in the coming week.

Davenport Central's Nathan Hummel (11) takes the ball down the field against Dubuque Hempstead on Monday night at Brady Street Stadium.