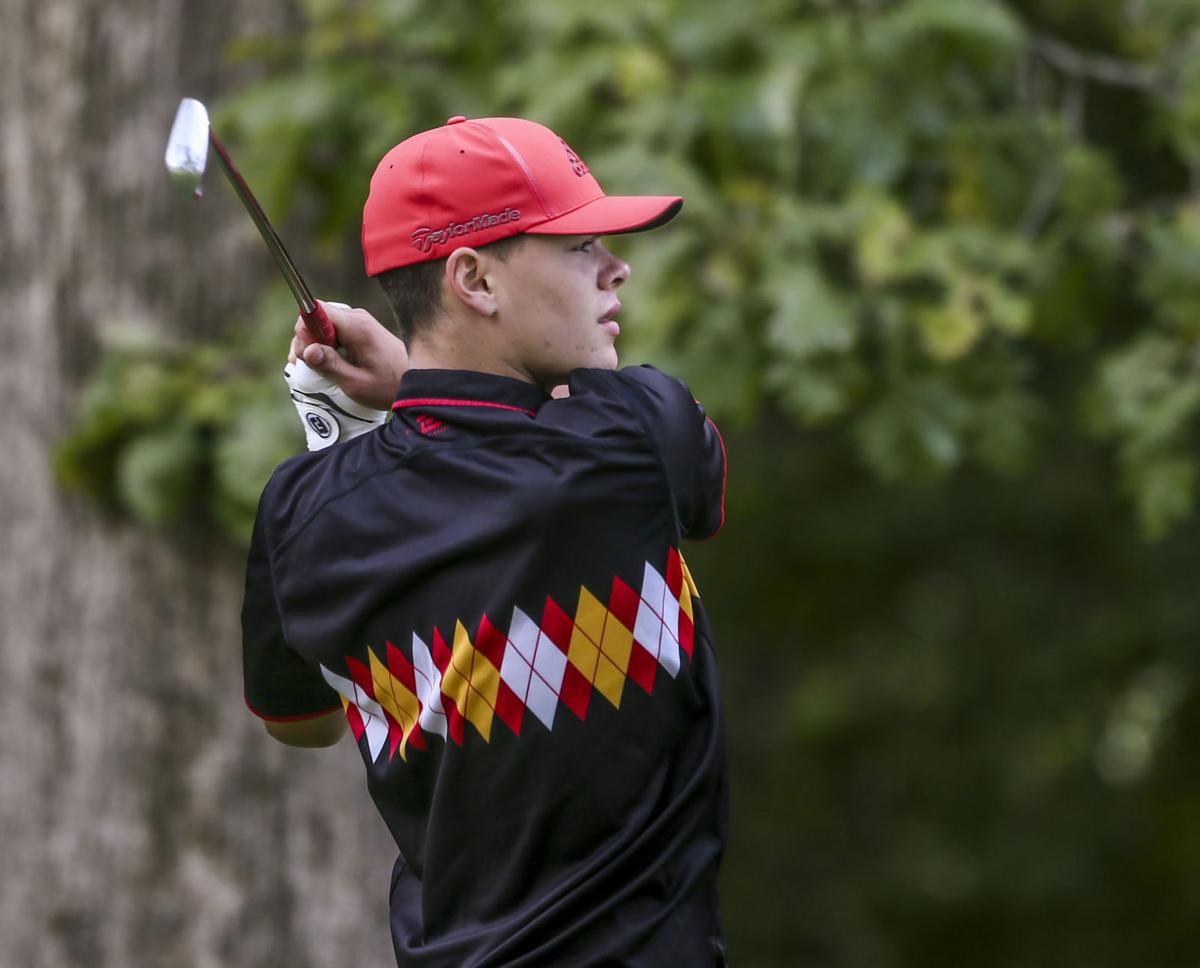 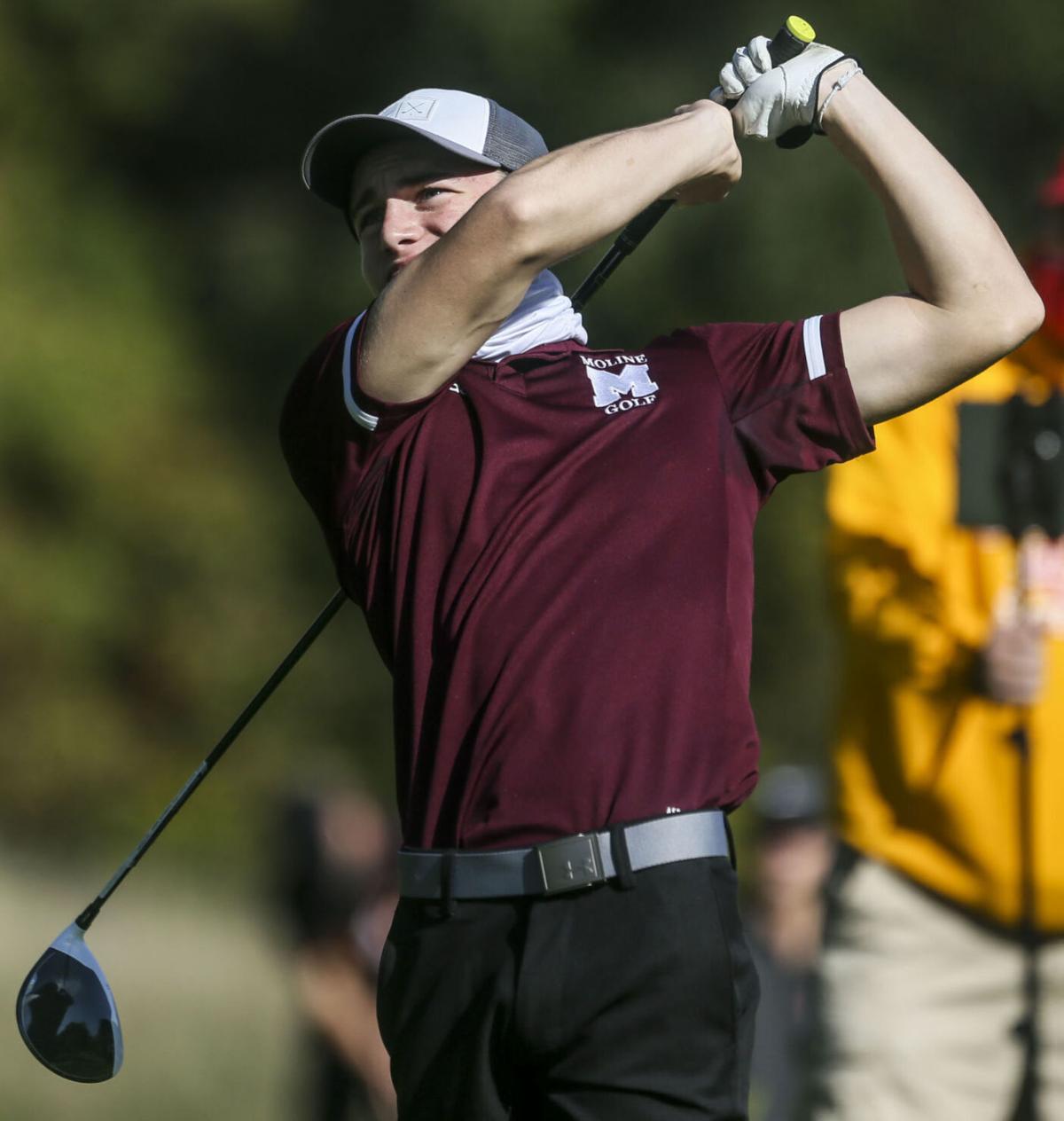 Moline junior Aaron Rogers follows through on a tee shot during Tuesday's Class 3A Rock Island Regional at Oakwood Country Club in Coal Valley. Rogers carded a 10-over 81 to advance to Monday's Pekin Sectional at Lick Creek Golf Course.

Colton Sigel and Aaron Rogers figured out on Tuesday that there is more than one way to get a golf ball around a golf course and score well.

The two local prep standouts opted for Plan B rather quickly in their Class 3A Rock Island Regional rounds at Oakwood Country Club in Coal Valley, and it paid off for both.

Using their drivers on a limited basis, Sigel, a Rock Island High school senior, and Rogers, a Moline High School junior, qualified as individuals for Monday’s Pekin Sectional. It is Sigel’s first time advancing out of the regional round and Rogers’ second straight trip to the second stage of tournament play. This year, because of the COVID-19 pandemic, sectionals will be the final tournament of the year with state meets not scheduled.

Sigel placed fifth overall with a 6-over 77, his best round ever at Oakwood in just his fifth time playing the course. Rogers, in just his second round at Oakwood, carded a 10-over 81 and was the ninth-place finisher overall.

Minooka’s Luke Petrovic, who aced the 144-yard third hole, earned medalist honors. He added two birdies to help offset six bogeys as he carded a 2-over 73.

Pekin (304) and Minooka (333) earned the two team spots to advance to Lick Creek Golf Course for the amended sectional. This year, only two teams advanced instead of three, and that cost Moline as the young Maroons were third with a 345 team score.

“No one played great except for Aaron,” said Moline coach Max Haverland, whose lineup was comprised of four sophomores and one senior along with Rogers. “Aaron played tough. The back nine was really windy and he said he wasn’t comfortable all day, but he was able to dig out a good enough score to advance.”

Part of that uneasiness for both Rogers and Sigel led to them calling early audibles as to the way they approached the 6,432-yard layout.

Sigel resorted to his 3-iron off most tees on par-4 and par-5 holes.

“I played it low because it was windy on the front nine,” said Sigel, noting he was popping it anywhere from 250 to 280 yards off the tee and shaping it as he wished. “I hit it the best I’ve hit it all year. I used my driver one time off the tee all day.”

That approach worked as Sigel, Petrovic and Pekin’s Carter Stevenson were the only players in the Top 10 without a double-bogey on their cards.

Sigel limited the damage with seven bogeys and birdied the par-4 fourth hole — the No. 1 handicap hole.

“I had some big par putts on the front nine that saved me — about 5-footers,” said Sigel. “I made about three of them and that helped. That was key.”

Rogers had just one double bogey, that on the 370-yard second hole. He had nine bogeys and birdied the 153-yard 14th.

That early double had him thinking, though, as did the ability to watch the scores on the mobile app used for scoring the event.

“I didn’t hit my driver a whole lot,” he said. “I played my 2-iron and 4-iron pretty much all the way through the back nine. I’ve never done that before. My driver was getting me in too much trouble.”

He was fortunate, though, to be able to overcome that.

“The score was pretty good,” he said. “The course was playing tough today and the greens were rolling fast. I didn’t get off the tee great, but my irons were pretty spot on.”

Rogers said that he also adapted his game as the day went on and it became apparent that the team wasn’t going to advance.

“Once I saw the team falling back in the standings a little bit, I tried to play aggressive to make sure I got myself up on the leaderboard and secured myself a top four individual spot,” he said. “Yeah, I kind of liked knowing what was going on and how I was ranking among the other players.”

While Rogers is a repeat sectional qualifier, Tuesday’s round was special for Sigel. Not only did he finally make it to the sectional stage in his last chance, but it put to rest a round that haunted him for a year.

“This is very satisfying,” said Sigel, whose Rocky team finished sixth in the eight team field with a 372 score. “Last year (at regionals) I had a 93 and played probably the worst round of my life,” he said with a smile. “... It was nice to come out here on a hard course and do this.”

Wednesday briefing: Traffic changes on I-74, giant fire in Milan injures 2, and Storm to sit out the season

A good day for all. Another wonderful day is on tap for the Quad-Cities. Get out and enjoy it while you can. You know what is lurking just aro…

Moline junior Aaron Rogers follows through on a tee shot during Tuesday's Class 3A Rock Island Regional at Oakwood Country Club in Coal Valley. Rogers carded a 10-over 81 to advance to Monday's Pekin Sectional at Lick Creek Golf Course.