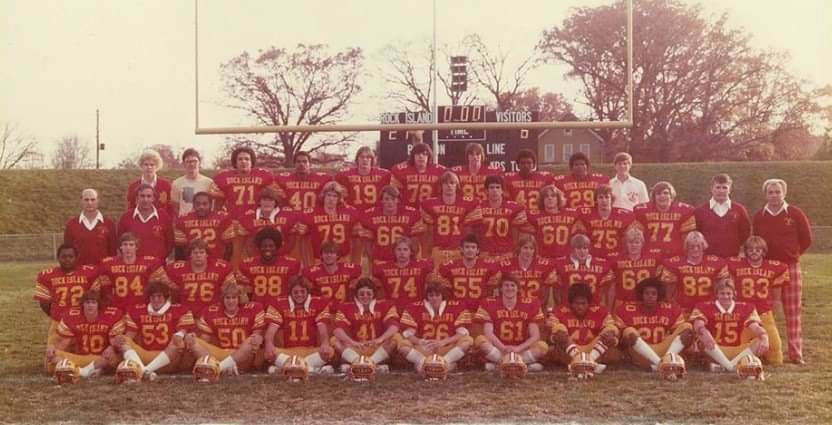 The 1978 Rock Island football team became the first in school history to play in an IHSA playoff game, losing at East St. Louis 35-0. Today, the Rocks will host the Flyers at Almquist Field.

Rock Island's Terry Brooks (44) runs against East St. Louis in the 1978 IHSA Class 5A playoffs. The Flyers won 35-0. Today, the Rocks will host East St. Louis and Brooks' grandson Quonterrion Brooks is a freshman on the Rocks' varsity roster.

The Rock Island football team had just won the Western Big 6 Conference title with a 6-3 record and those of us in that year's senior class thought our team was really something.

I mean, this was the first time the Rocks were going to play in the IHSA playoffs and my senior year was going to wind up with a team in the state championship game. Or so we thought.

Maybe it was what was taking place on some of our numerous student fan buses heading to East St. Louis that had us believing our team was the best.

It didn't take long for the hopes to be dashed. An intimidated bunch of players and fans lost to the Flyers 35-0 and the only real highlight was fellow senior John Greer jumping on the bleachers in the student section and breaking right through the wooden slats.

Fast forward nearly 40 years and many of us were gathered around the tables at our reunion in September and the memories were still the same. The fun it was to win a conference title, play in the school's first-ever playoff game and laugh about what might have been one of the scariest few hours many of us have ever spent.

This afternoon, the scene switches to Rock Island's Almquist Field where the Rocks (8-2) will host the Flyers (10-0) for the first time since '78. Will the outcome be the same? We will all know in a few hours. But one can only hope the memories will be the same.

"I really thought we were good enough to beat them ... or at least play with them," 1978 Rocky running back Terry Brooks said. His grandson, freshman Quonterrion Brooks is on the Rocks roster this year. "We were so worried about the surroundings and I think some of our guys did not have their full concentration on the game.

"We were also missing my running back partner Glen Donaldson. A lot of what East Louis is about is intimidation. It was a different world. They had what we called 'Astro-dirt' for a field, we had police lining our side and five yards behind the bench and their fans intimidated our fans and our players from the minute we got to town."

That started even before the players or the fans got to the field. We saw boarded up houses, broken windows scattered in yards and on sidewalks and our buses were led into the city by police escorts. Officers riding horses led the team to the locker room, to the field and back again. They did the same for our large student section and adult fans.

"We came to the field believing we were going to win that game," said lineman Mike Hardin. "There was no Internet or social media, so we didn't know anything about them. We thought we had the size and the speed, but once we got there, it was really intimidating. Their fans were hitting and spitting on our bus.

"I think we felt like we could play with them and at halftime we realized there was nothing we could do. It was a great memory and I'm still proud we were the first to play in the playoffs at Rocky, but I think back and maybe we should be glad we didn't beat them."

That introduction to East St. Louis wasn't the best way to feel welcomed or comfortable. The ESL players didn't make it any better once the game started.

"We thought we were really good and really ready," defensive back Tony Perkins said. "It was a different scene coming into the city. It was a bad place to be, and living down near St. Louis now, it isn't a whole lot better these days.

"We warmed up and I thought I was fine. Then, when we started playing, I knew I wasn't fine. I thought I ran pretty well, but their receiver ran right past me on the first play. It was imposing and it was scary and I'm sure that was a part of the way we played."

Brooks would like to think the Rocks will fare better today.

"I believed then and I believe now, Rock Island has athletes that are as good as anyone in the state," he said. "If our guys take advantage of being at home and not look at their reputation, we will give them a game. I believe that. Now, will our guys."

Jeff Wendland is the lead prep sports writer for the Dispatch-Argus-QCOnline. He can be reached via email at jwendland@qconline.com or on Twitter @jaydub_DA

In its debut Western Big 6 Conference season, the Sterling football team quickly made its presence felt by going 7-0 to capture the conference championship.

The IHSA's release of the schedules for the 2020 prep football season earlier this week has led to the annual circling of key dates on every area team's calendar.

The 1978 Rock Island football team became the first in school history to play in an IHSA playoff game, losing at East St. Louis 35-0. Today, the Rocks will host the Flyers at Almquist Field.

Rock Island's Terry Brooks (44) runs against East St. Louis in the 1978 IHSA Class 5A playoffs. The Flyers won 35-0. Today, the Rocks will host East St. Louis and Brooks' grandson Quonterrion Brooks is a freshman on the Rocks' varsity roster.