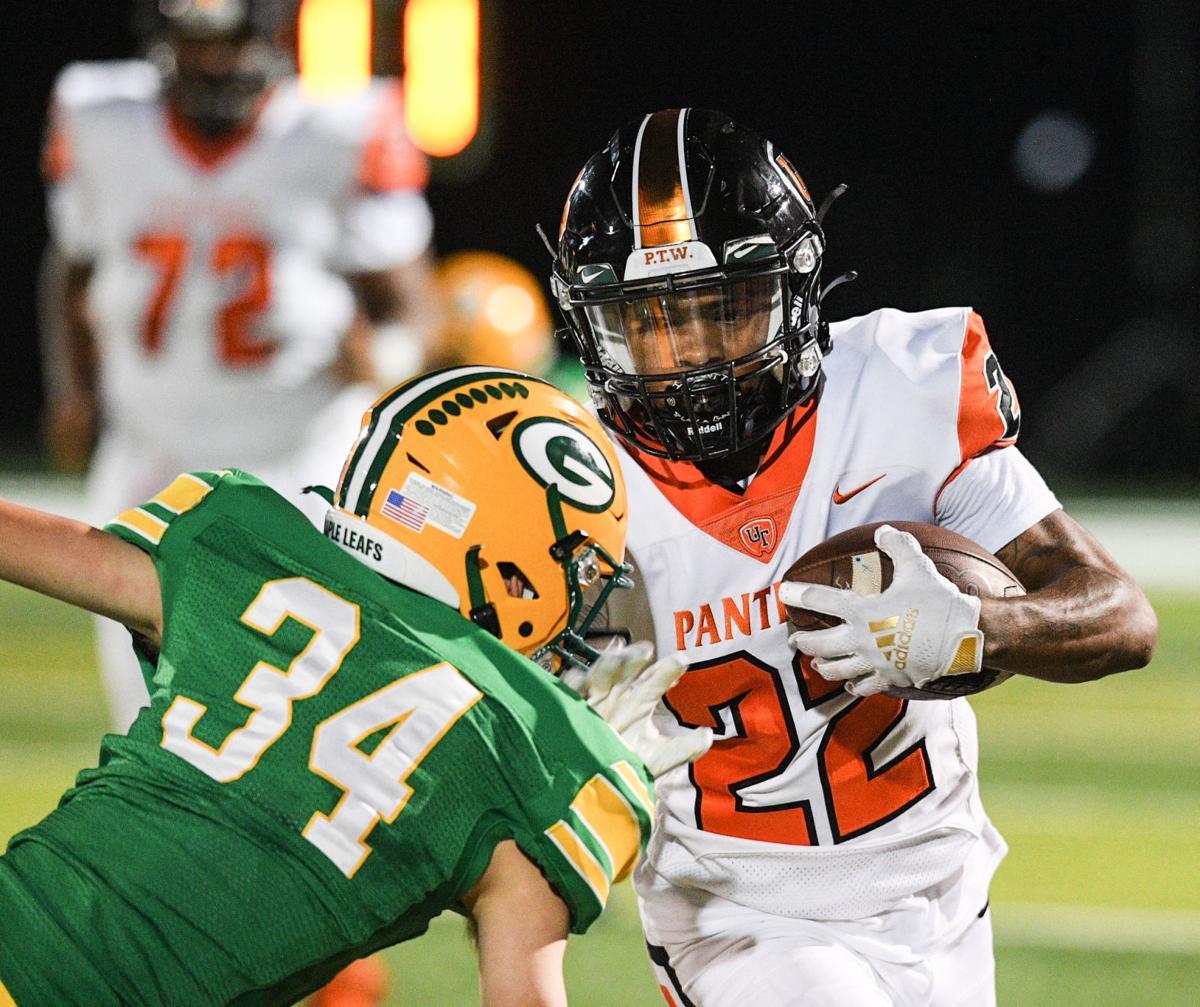 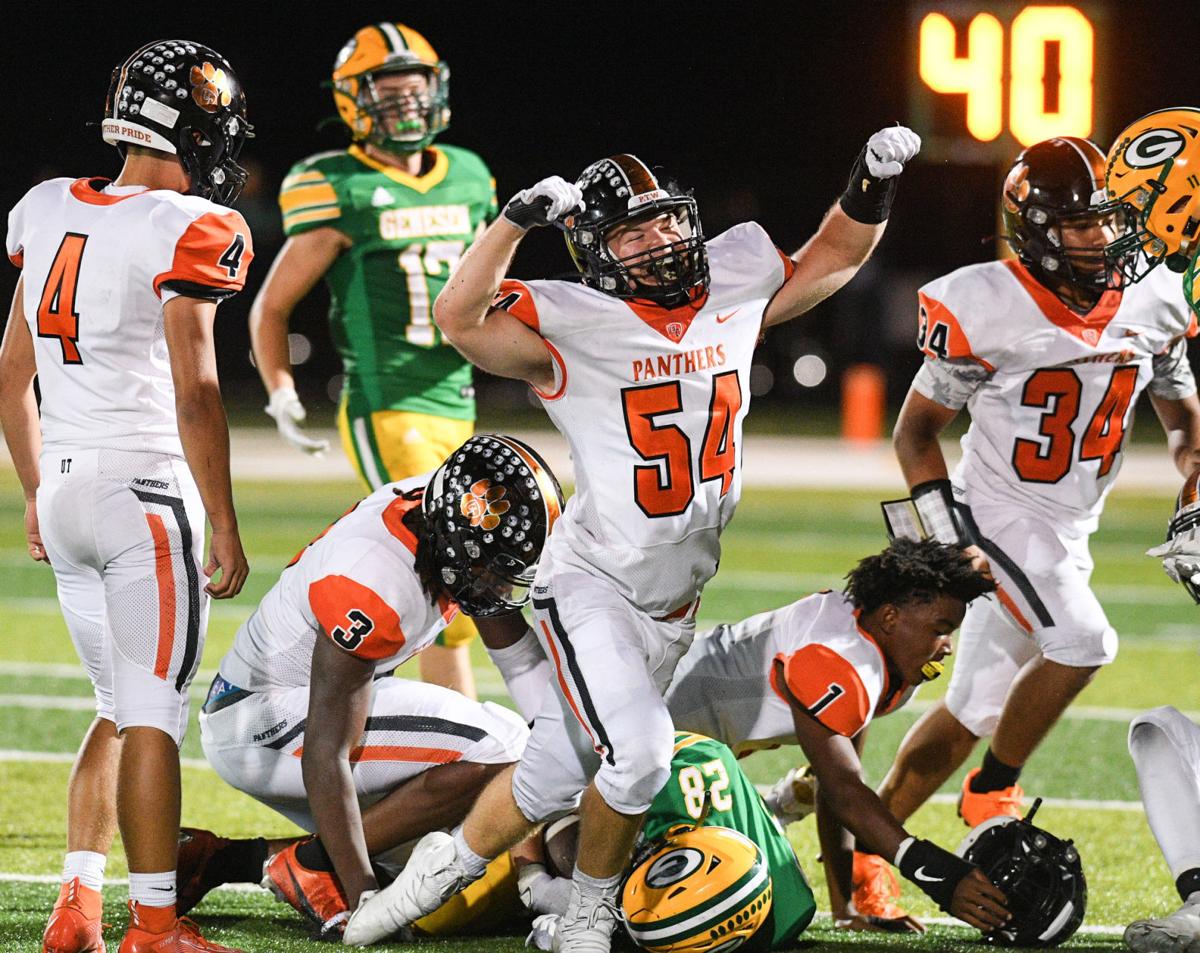 United Township's Trent Roberts (54) celebrates a tackle against Geneseo during their game at Bob Reade Field Friday in Geneseo. 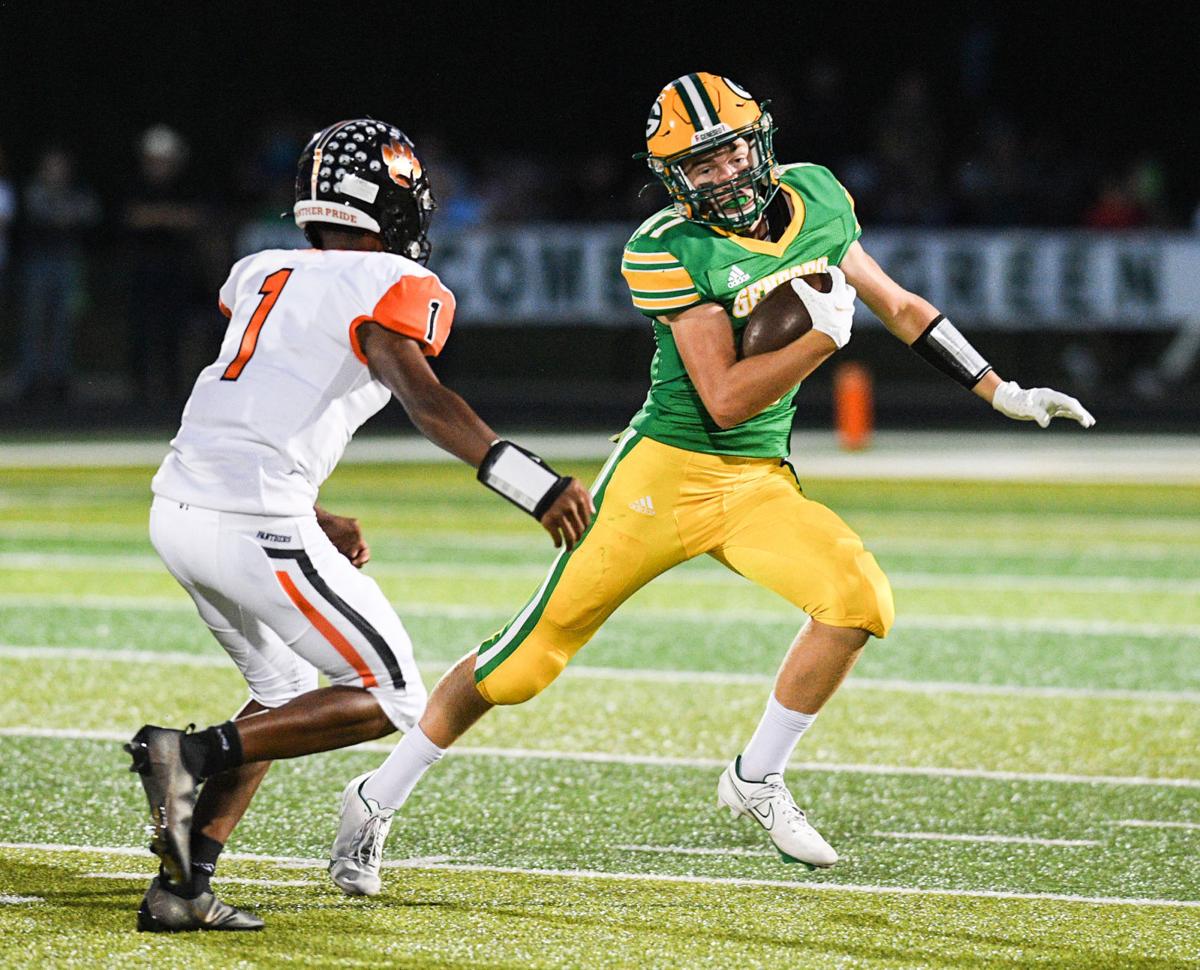 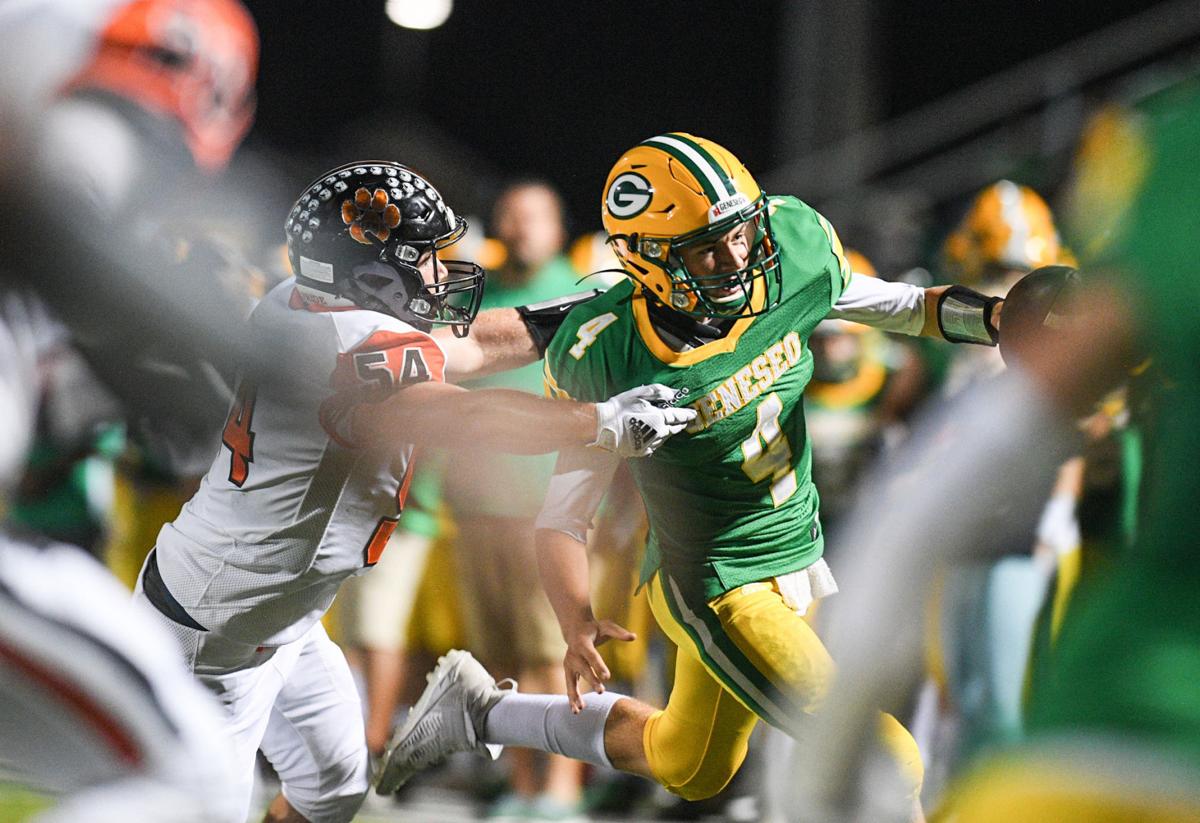 He was replaced for a drive and it seemed like his night was done, cut short because of injuries to his ankle.

But Kelley came back late in the fourth quarter and orchestrated two touchdown drives against Geneseo at Bob Reade Field, the second a game-winning drive to seal UT’s 22-17 Western Big 6 Conference victory and 3-0 start to the season.

"We call him ‘Swag Kelley,'" UTHS coach Nick Welch said. "He’s got a lot of confidence and he believes in himself. He works hard and he prepares and he’s got good teammates that believe in him."

According to geneseofootball.com, it was UT's first victory over the Maple Leafs since a 54-0 victory in 1931 that sent the series into a hiatus until 2002.

And it wasn’t easy. Down 17-14, Kelley led a two-minute drill by connecting with passes to receiver Damahz Slater and Oscar Perez-Valazquez to get the Panthers deep into Maple Leaf territory. A costly roughing the passer penalty brought UTHS inside the red zone, and that’s when the Panthers struck.

Kelley rolled out to his right and zipped a high pass to Perez-Valazquez in the back right corner of the end zone. The junior receiver jumped up and hauled it in, keeping his foot in bounds by about a blade of grass to give the Panthers the lead with 57 seconds remaining, their first lead of the night.

“I think I blacked out,” Kelley said. “I don’t really remember the play much. I’m just glad we got it done.”

For Welch, the play was still replaying in his mind.

“They moved to man coverage there and were giving Oscar a cushion,” Welch said. “We were on the 10-yard line so I thought it would be a great time to run a speed out, we love that route. I honestly thought that we overthrew it, but Oscar got a toe tap drag there at the back of the end zone to make a great catch.”

But the game wasn’t over.

Geneseo still had time on the clock and they would use every second of it as they drove all the way to UTHS 5-yard line with two seconds remaining.

The game would be decided on one final play and that play would go the Panthers’ way. Senior defensive end Antwan Hawthorne chased Geneseo quarterback A.J. Weller to his left and jumped up as soon as Weller released the ball — hitting Hawthorne in the hands and causing the ball to fall, sealing the Panthers’ first 3-0 start since 2001.

“Winners find a way to win,” Welch said. “It doesn’t matter what happened the previous 55 seconds. All that matters is what happens right now. What better guy than senior captain Antwan Hawthorne to knock the ball down. It just shows how far we’ve come as a program and as a team. People say things about these kids, what they can or can’t do, and usually it's negative, but they believe in themselves and they believe because they know they put the time in. I’m proud of them.”

After being pressured the entire game, Kelley was able to buy time with his legs and lead the Panthers to a rare victory in a series that Geneseo leads 10-5-1.

Kelley found receiver Korey Randle for the 19-yard score to close the gap to three points with just 3:17 remaining. Geneseo got the ball back with a chance to run out the clock with a first down, but failed after picking up eight yards on first down. The next two plays were negative rushes.

That’s when Kelley led a 52-yard touchdown drive, capping it off with the touchdown to Perez-Valazquez.

The UTHS bench stormed onto the field with an unseen excitement. The final 3:17 was an entirely different game for a Panther team that looked all but hopeless earlier in the quarter. Geneseo had tacked on a touchdown to take a 17-8 lead in the third, a score that lasted for over a quarter’s time in the second half. It seemed like nothing would change.

The UTHS offense was unable to move the ball for a majority of the game because the offensive line was unable to protect its quarterback. But the final two drives were different, and even Welch doesn’t know why.

“I don’t know what changed,” Welch said. “We’re going to find out in about 45 minutes when we get home and watch the film. But tip your caps, that’s a very tough Geneseo football team. They do what they do. They’re known for being big and physical so they made it difficult. They work hard, but I think we were able to get the ball out quick and let our athletes do their jobs.”

As for the first half, it was a tale of two quarters.

Geneseo flat out dominated the first quarter, pressuring Kelley and recording four sacks. Even on seemingly normal pass plays, the Maple Leaf pass rush got to Kelley and made hits on the quarterback after he threw the ball. Kelley was slow to get up multiple times and even went down on the field after an apparent ankle injury in the first.

The Geneseo offense was also on a roll, Weller found Calvin Pettit and Mason Lovig for big gains to set up Maple Leaf scoring drives. The strike to Lovig after Weller rolled to his right and found time for the play to develop put Geneseo inside the 10-yard line. From there, Joushua Steines was able to find the end zone on a 5-yard carry to the right side. He ran in untouched to make it 7-0 with 8:24 left in the first quarter.

After a quick defensive stop, the Maple Leafs got the ball back again and drove all the way down to the 3-yard line. However, two negative rushes and then a false start on 4th and goal took the offense off the field in favor of kicker Hunter Clark-Holke. He made it 10-0 with 4:13 left in the first quarter.

The second quarter was when UTHS started to find its stride.

The Panthers gave the ball to Arrington for the first time and the senior running back had 11-, 14- and 12-yard rushes in his first three attempts. While the next two drives stalled out around midfield, it was clear UTHS had begun to find holes in the Maple Leaf defense.

The Panther secondary was the first to give UTHS the momentum it needed to score. Two-way player Damahz Slater anticipated a curl route to the right side and jumped early, snagging Weller’s pass and returning it to Geneseo’s 25-yard line. From there, Arrington and Kelley worked the Panthers inside the 5-yard line.

Then on a crucial fourth and goal, UTHS brought in Korey Randle at quarterback and he rushed for the first down out of the wildcat formation. They ran the exact same play again on first down and Randle found the end zone on a 1-yard run. He then faked a handoff and ran it in for the two-point conversion to make it 10-8 with 2:36 left before half.

After that, not much happened until the final 3:57 of the game. UTHS won, but it was never in control.

“We will learn from this,” Welch said. “It’s nice when you can get punched in the mouth and still find a way to win. We get a little humility, but we have to stay focused on the task at hand. We are going to enjoy this one until Sunday morning and then we are onto Quincy.”

Kelley finished with 233 passing yards and two touchdowns. Slater finished with six catches for 94 yards. He also added an interception on defense that set up the Panthers' first touchdown drive.

Perez-Velazquez had four catches for 60 yards and a touchdown. Senior running back Loren Arrington had 77 yards on 14 carries.

Geneseo’s Weller had 186 yards with a touchdown and an interception. Jaden Weinzierl had 118 receiving yards and 75 yards on the ground.

The Panthers (3-0, 1-0 WB6) will play next against the Blue Devils for homecoming at 7 p.m. Friday at the Soule Bowl.

DEWITT — The Central Dewitt football team took advantage of Clinton mistakes in the second half of a 44-28 home win on Friday night.

It was billed as a Class 3A top-10 matchup. It turned into a lopsided affair.

The River Hawks are off to a 3-0 start, but the fourth-ranked team in eight-player football has its eyes on the ultimate prize.

United Township's Trent Roberts (54) celebrates a tackle against Geneseo during their game at Bob Reade Field Friday in Geneseo.