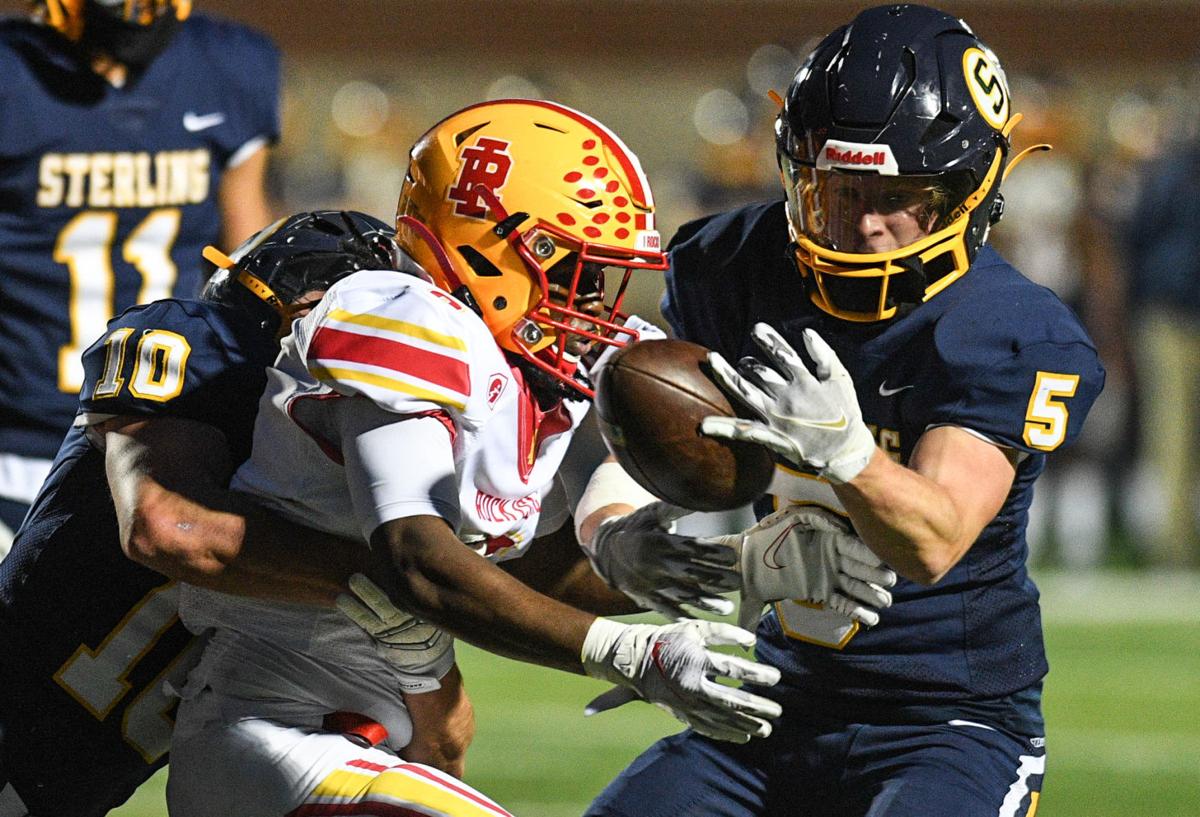 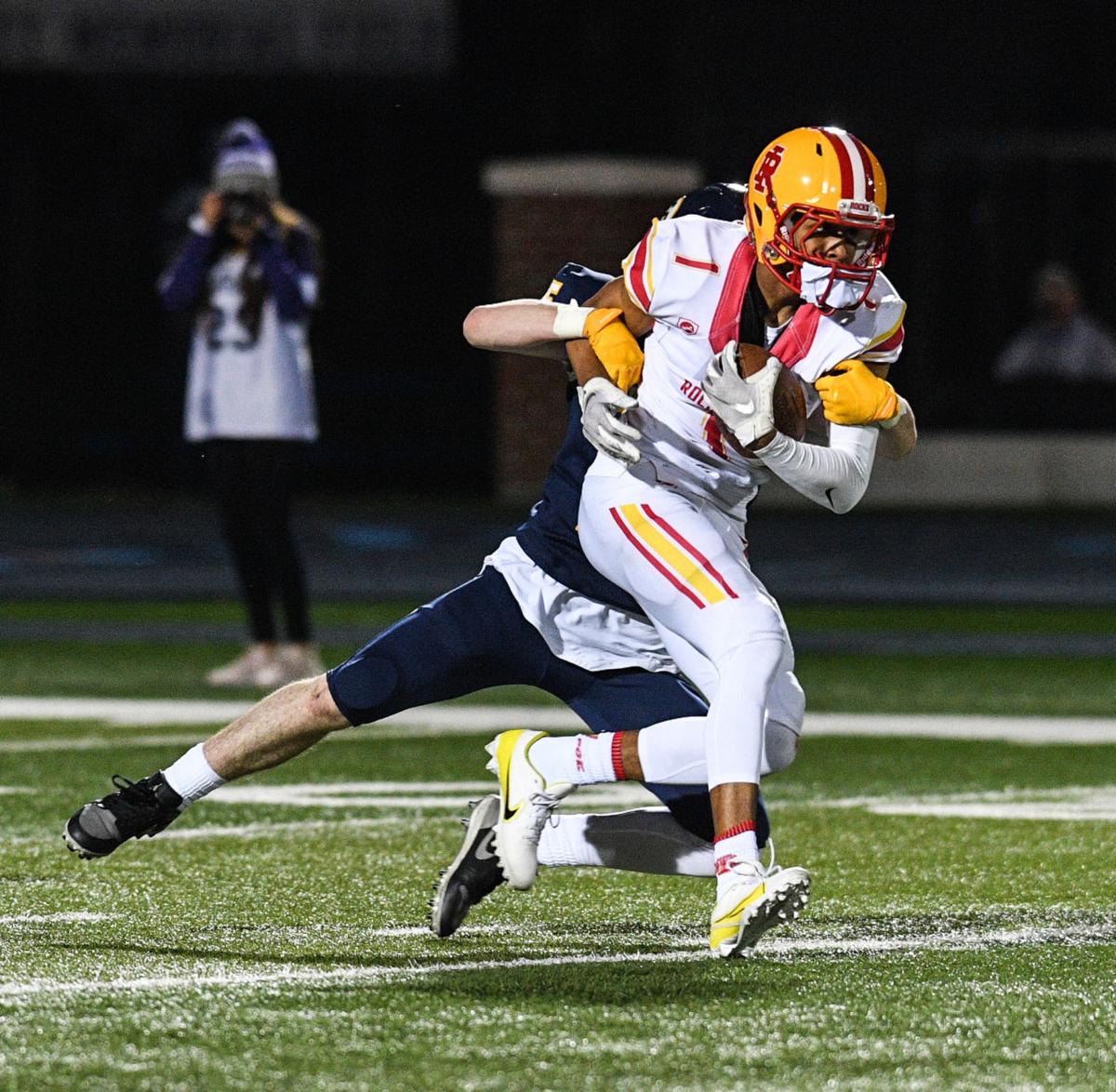 STERLING – A perfect script played out for the Sterling High School football team here Friday night and that left the Rock Island Rocks wondering might have been after miscues and missed opportunities.

In a battle of Western Big 6 Conference undefeated teams at Prescott Memorial Field, the hosting Golden Warriors played keep-away from the explosive Rocks offense with 430 yards rushing in 66 snaps and held off a furious Rocky comeback attempt to post a 27-18 victory in the Week 4 showdown.

Rock Island, which committed three turnovers in the game, scored three times in the fourth quarter. However, missed point-after conversions after all three scores – a missed kick and two failed pass attempts – added more issues to early struggles against a Sterling defense that held the Rocks scoreless through three quarters.

In controlling the time of possession 33:13 to 14:47, the victory set up the Warriors to control their own destiny in search of a Big 6 title repeat. This one will be unofficial since there is not a complete round-robin schedule in the COVID-19-altered six-game season resulting in no official crown being handed out.

“They did a really nice job up front,” said RI coach Ben Hammer of the Golden Warriors, who consistently rattled off long drives throughout the game that added more pressure to an offense that had limited chances. “We didn't execute very well in the first half offensively, the whole game offensively. We had stuff that was there, we just have to do a better job of executing.”

The Rocks (3-1, 3-1 Big 6) also needed to figure out a way to stop the Golden Warriors run game that was led by Noel Aponte's 177 yards in 25 carries and three TDs. Sterling had two other join Aponte over 100 yards as David Tessmann carried 24 times for 126 yards and QB Kael Ryan toted 10 times for 113 yards.

Sterling (4-0, 4-0 Big 6) closed the first half with two drives of 10-plus plays for 113 yards that the Rocks stopped without giving up points thanks to a Marieon Anderson interception and the end of the half. That left the Rocks in a 7-0 halftime hole.

“When we didn't give them a short field, our defense did a nice job of being physical and making them drive and making them earn everything,” said Hammer, whose team forced punts on Sterling's first two drives and got a turnover on the fourth drive.

“We knew we had to control the ball and prevent them from making big plays,” said Sterling coach Jon Schlemmer, whose offense was working behind a makeshift line that included one new starter.

Schlemmer watched the Rocks finally find some success late in the fourth as they valiantly battled back.

Cole Rusk got the Rocks on the board with a 17-yard TD catch from junior QB Eli Reese with 9:23 left in the fourth to make it a 19-6 game before Sterling's final scoring drive.

Another failed conversion – Rusk catching a pass after being forced out of bounds – left the Rocks with no hopes of continuing the rally.

“You always don't want to run out of time when you're behind on the scoreboard,” said Hammer of his offense that finally found success. “... It would have been nice to have executed better earlier.”

Reese finished the game completing 14 of 25 pass attempts for 254 yards, but threw his first two interceptions of the season in the contest.

The Rocks had very limited success with their ground game, finishing with just 69 yards in 19 carries, led by Marriyon Rogers' 51 yards on 12 attempts.

Most of Rocky's first-half yardage came on one play when Reese hit Jakobe Bea streaking near midfield and he took the ball to the sterling 5-yard line for an 82-yard hookup that had the Rocks in position to answer Sterling's first score. Two plays later, however, Marriyon Rogers was bottled up on a run to the left and the ball ended up with Sterling's Nate Ottens having possession.

Sterling answered with a 14-play drive that ended with Marieon Anderson intercepting Ryan at the Rocky 28.

The Rocks ran only eight plays inside Sterling territory in the first half and only three more in the third before their last three scoring drives.

“We've got two games left and we're going to control what we can control.” said Hammer. “We're going to try to win our last two games and let everything else fall where it may.”

Watch now: Thomas Graham Jr. gets past the fall

Watch now: Thomas Graham Jr. gets past the fall

Alleman High School football coach Todd Depoorter retires from the program he has been a part of for 32 years, the last six as head coach.

The Western Big 6 Conference has released its all-conference teams for football, volleyball and boys soccer.

STERLING, Ill. — The United Township High School football team defied the odds to the very end of this pandemic-altered season.

Colton Stahl went from running back to quarterback this spring and didn't miss a beat for the Ridgewood football team.

Big 6 football by the numbers heading into final week

Just for giggles this week, let's take a look at some of the things statistically that stand out heading into the final week of the COVID-19 pandemic adapted Western Big 6 Conference football season.

GENESEO – Moline junior quarterback Alec Ponder and the Maroons did such a number on the Geneseo football team that it left Maple Leafs coach Larry Johnsen a little punch drunk Friday night.

ANNAWAN — With no state championship to pursue this season, the Annawan-Wethersfield football squad was more than happy to play for a Lincoln Trail Conference crown Friday night.