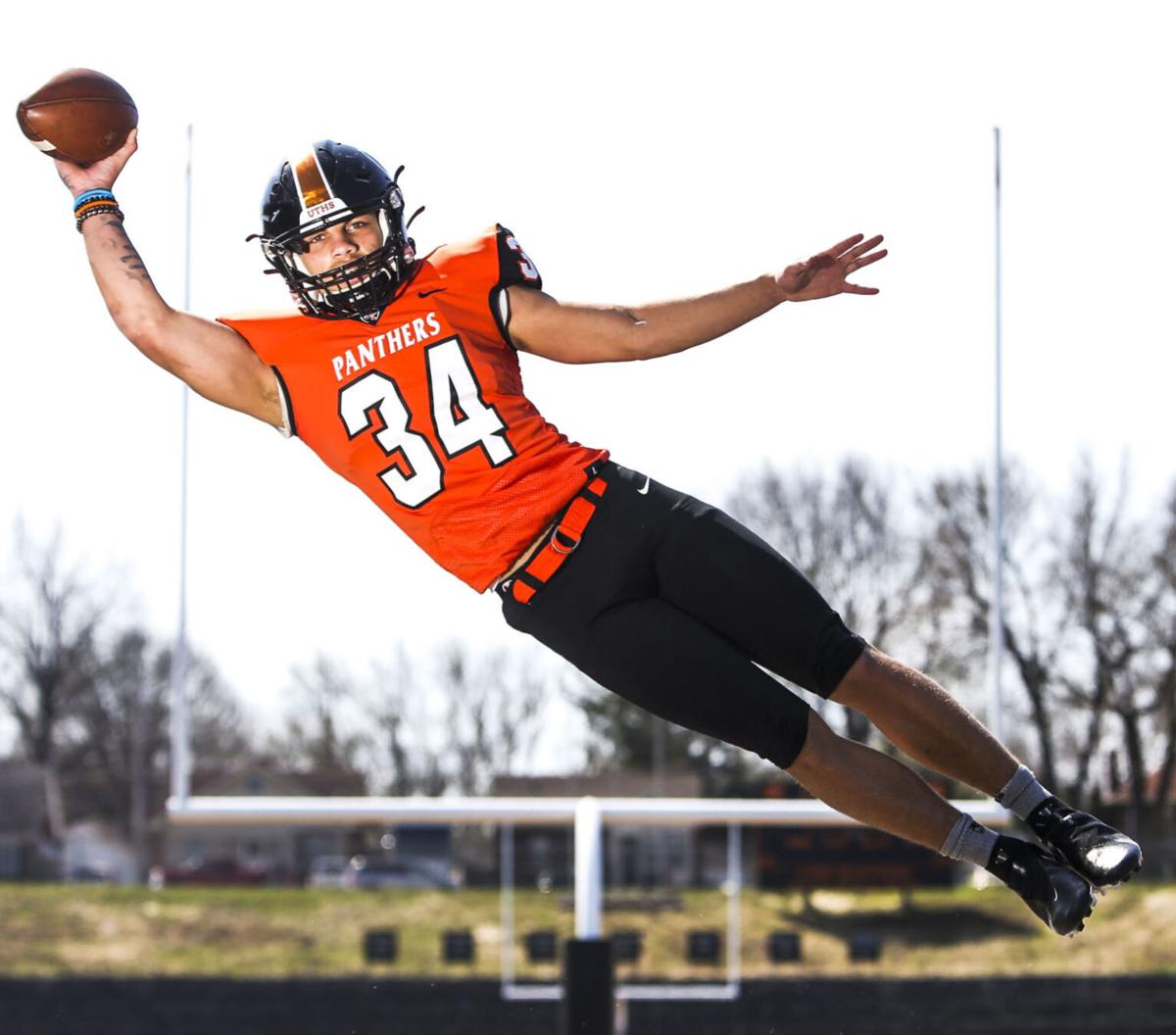 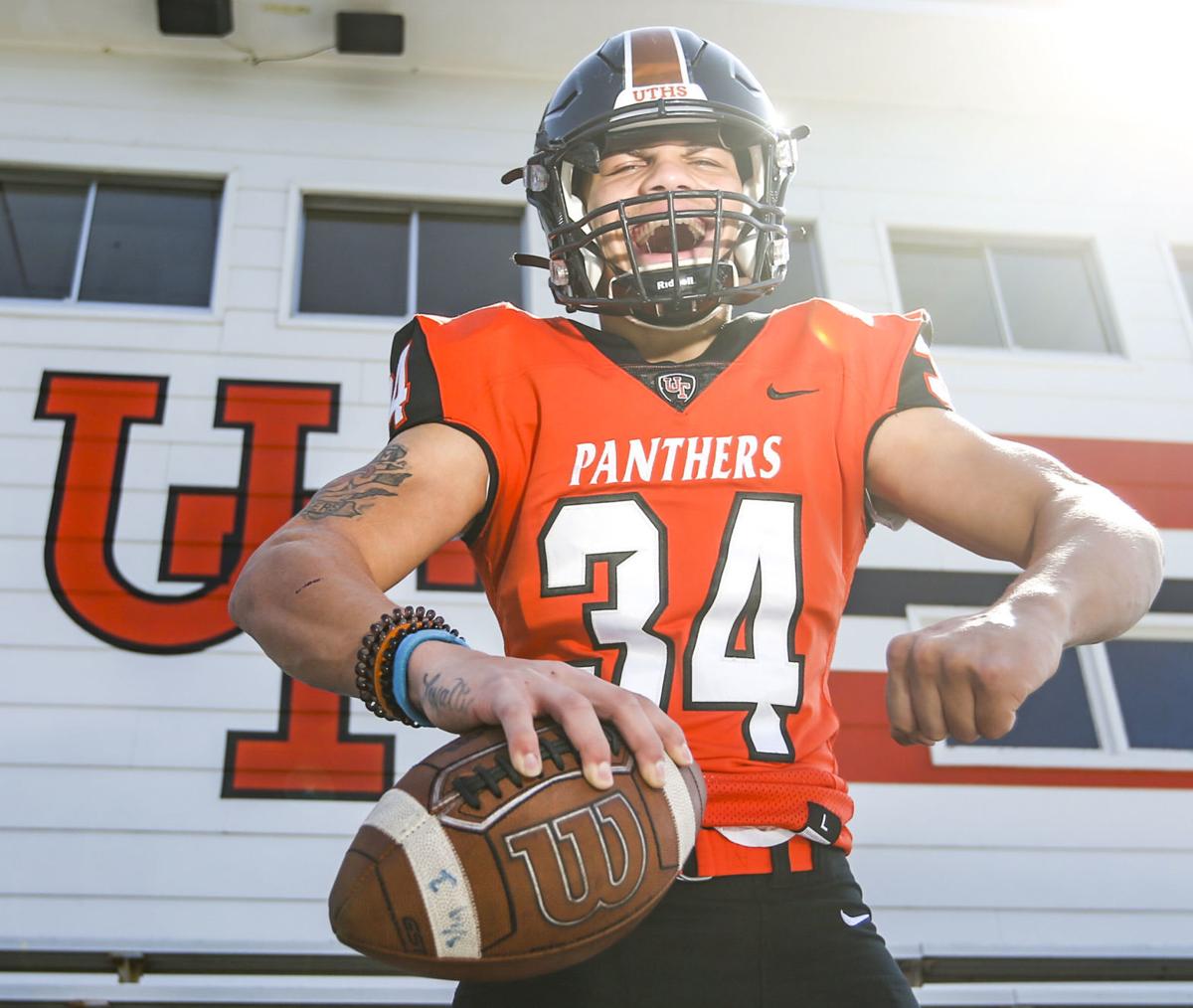 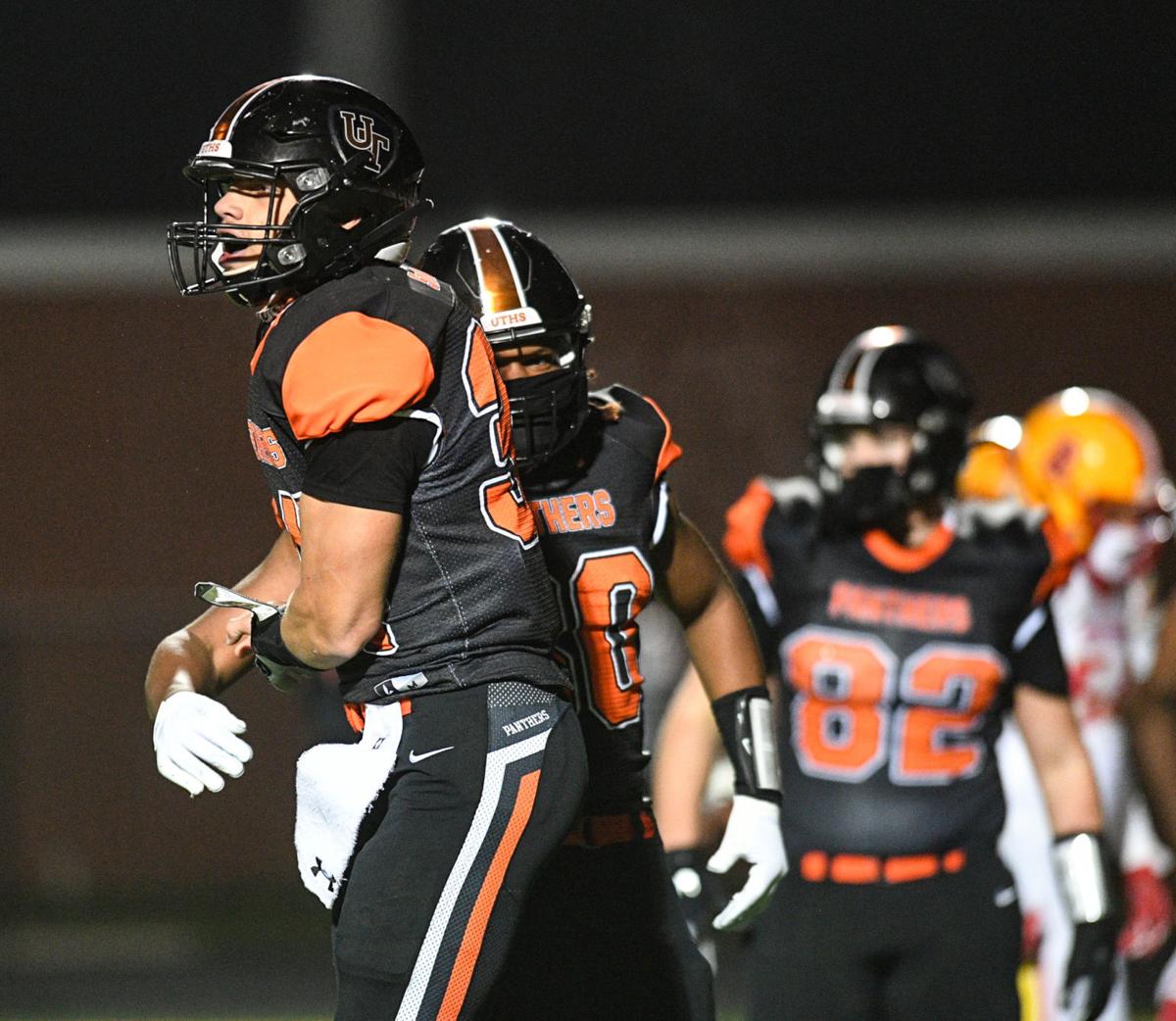 United Township's Cayne Smith (34) celebrates his touchdown against Rock Island during their game at the Soule Bowl on March 26 in East Moline.

Cayne Smith has found plenty of clear running lanes on the football field this spring and when he has, it has meant a number of foes left in his dust.

Finding a clear path in his life in order to be able to enjoy this football success has been much more difficult for the United Township High School senior.

Through three games, the powerful 6-foot, 190-pounder has rushed for 566 yards and nine touchdowns, including four scoring runs of 22 yards or longer. Among those totals were last Friday's 21 carries for 196 yards and two scores — including a back-breaking 85-yard TD jaunt — in UT's historic victory.

It was a memorable night as the Panthers snapped a 47-game Western Big 6 Conference losing streak with a 49-36 victory over Moline at the Soule Bowl. Smith's standout effort in that outing earned him this week's Illinois Pacesetter honor.

“He's on a whole other level,” UT coach Nick Welch said. “He is a man on a mission.”

As much as Smith has earned the recognition — and a lot of it — with his on-field performances in this spring's pandemic-shortened season, the 18-year-old deserves even more credit for what he has done off the field to make his football future so much brighter.

“I wasn't going to school a lot because I didn't know what I wanted to do with my life,” said Smith, recalling his early high school years and growing up without his dad in his life until junior high school. “I just kept playing football because football is my favorite thing to do. And then it just started making a way for me.”

That path is still a little cloudy. Smith said it appears as if he will have to go to a junior college to play since he will not meet eligibility requirements to jump into a four-year school in the fall.

“He's got a lot of opportunities right now for preferred walk-ons at Iowa Central and Iowa Western, two very good JUCOs in the Midwest,” Welch said. “But they want him to play safety and he wants to play running back. He's got time before he has to make a decision for those preferred walk-ons because it's not scholarship money. …

“He will have to go to a JUCO because of his academics, but we're hoping something comes up or somebody gets impressed and gives him a chance to play running back if that's what he wants. If not, I hope he makes a decision that he'll go play safety at a school and be a football player and not just a running back.”

Having to go to a junior college was part of Smith's motivation to become both a better student and football player, knowing he could get a chance to play more ball in college as well as further his education.

He also was spurred on during his junior year when he shared time in the backfield with then senior Telvin Chatman. Even in a share, Smith finished with just under 600 yards rushing in nine games, according to Welch. But he was not the runner he is now.

“It was kind of tough sharing carries, but it was a team thing,” said Smith, who also played defense as a junior. “I knew I wanted to be the main runner this year.”

Was that the focus of inspiration for this season?

“That had something to do with it,” Smith said. “And I wanted to make sure I go to college.”

Smith doesn't shy away from talking about his early academic struggles and lack of focus in life. He takes full responsibility for that. He knows that was part of a tough lesson he learned.

It is also something that continues to spur him in the right direction and toward his ultimate goal of playing Division I college football.

“It's big,” Smith said of conversations he has had with at least one Division I state school. “For a second, I thought I wasn't good enough. Then I told myself I have to work harder and make a name for myself.”

That he has accomplished in a big way.

And Welch is proud of the young man for the way he went about his business to create his football future.

“It shows how hard he worked in the off-season to get his body ready and his willingness to do the things he's coached,” Welch said. “After that, it's just gifts. He's fast, he's big, he takes hits.”

Welch then joked about one recurring issue.

“My only complaint is he needs to stop cramping in the fourth quarter,” the coach said of calf cramps his standout has suffered the last two weeks.

But Smith is using all that adversity as inspiration to do the right things off the field so he can stay on it in the future. That included motivated weight and speed work since the 2019 season ended right through the cancellation of the fall 2020 season.

Welch said that not having a season last fall was a big hurdle for Smith's college prospects.

“If he had the fall season and he starts this way, we get the highlight film out and contacting coaches, people would be all over him because he's a pretty dang good player,” Welch said.

Smith, though, put a positive spin on the COVID-19 situation.

“A lot of people blame the pandemic for a lot of things,” he said. “But I look at it as a blessing because it gave me more time to work and hit the weights. … It sucks that (the season) got pushed back. I wanted to play more games. But all I can do is my best in those six games.”

So far, the numbers show his best is pretty good. And that is helping his course to what portends to be a bright future.

Watch now: How to fix baseball? Change the strike zone

Watch now: How to fix baseball? Change the strike zone

Ten Hochman: With Blues-Avalanche tonight and the Arenado trade, a look at all things Denver vs. St. Louis

Ten Hochman: With Blues-Avalanche tonight and the Arenado trade, a look at all things Denver vs. St. Louis

It wasn’t exactly the greatest week for the Moline High School football program.

In a sporting contest, usually it's the eye-popping plays that can turn a game or prove to be the difference in an outcome.

EDGINGTON — A strange spring football season got even stranger with a Monday night game at Rockridge, but that didn't stop the Rockets from putting on a show.

SHERRARD — Granted, this has been a far from usual regular season for area prep football teams.

United Township now has a streak to call its own — a Western Big 6 football winning streak.

Titans hold on for close win against Golden Eagles

ALEDO — In Friday's battle of one-loss foes, it was the defense that stood out as Annawan-Wethersfield edged Mercer County 22-14.

Those fireworks you heard from East Moline on Friday night weren't from an early Fourth of July festival.

United Township's Cayne Smith (34) celebrates his touchdown against Rock Island during their game at the Soule Bowl on March 26 in East Moline.