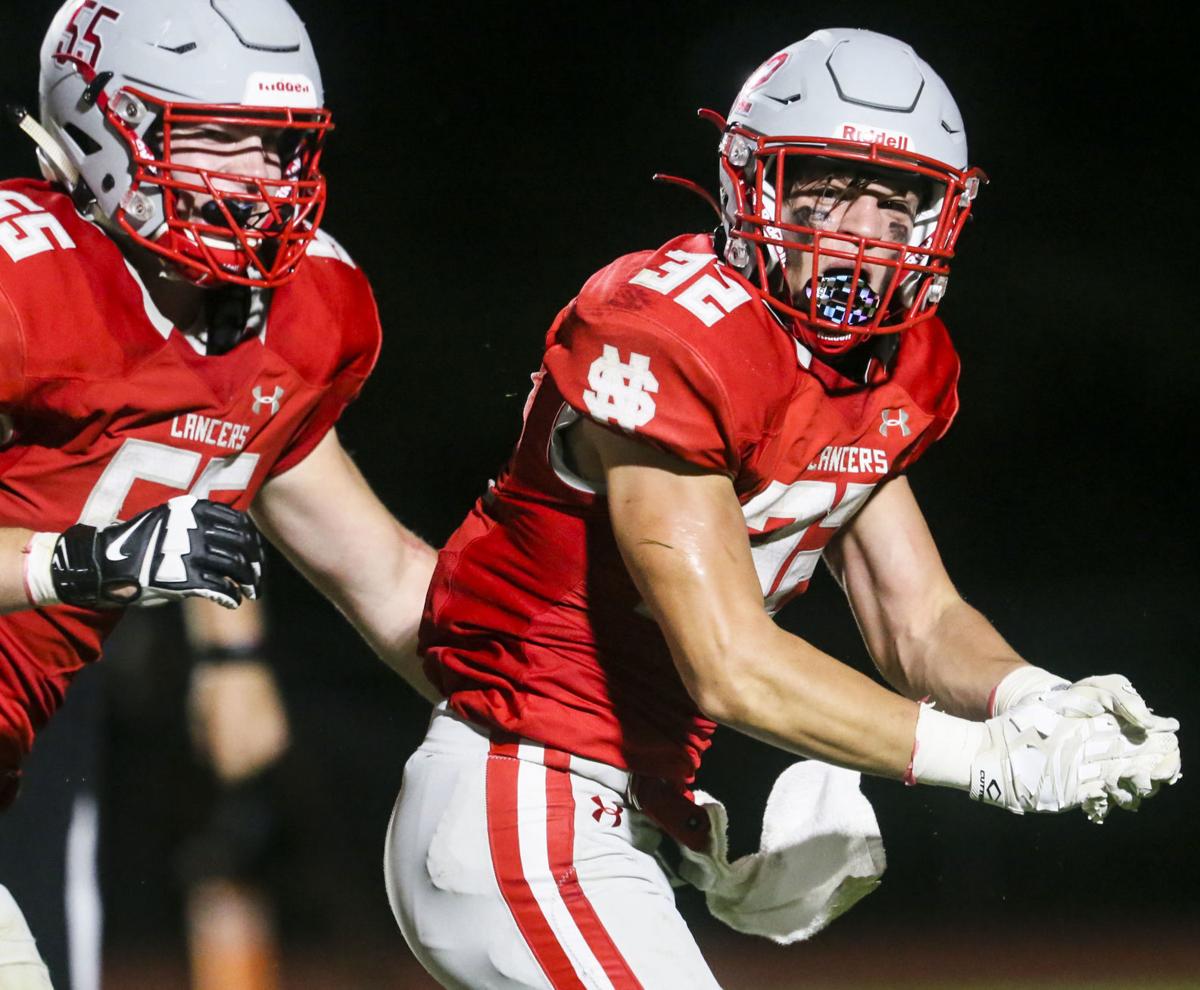 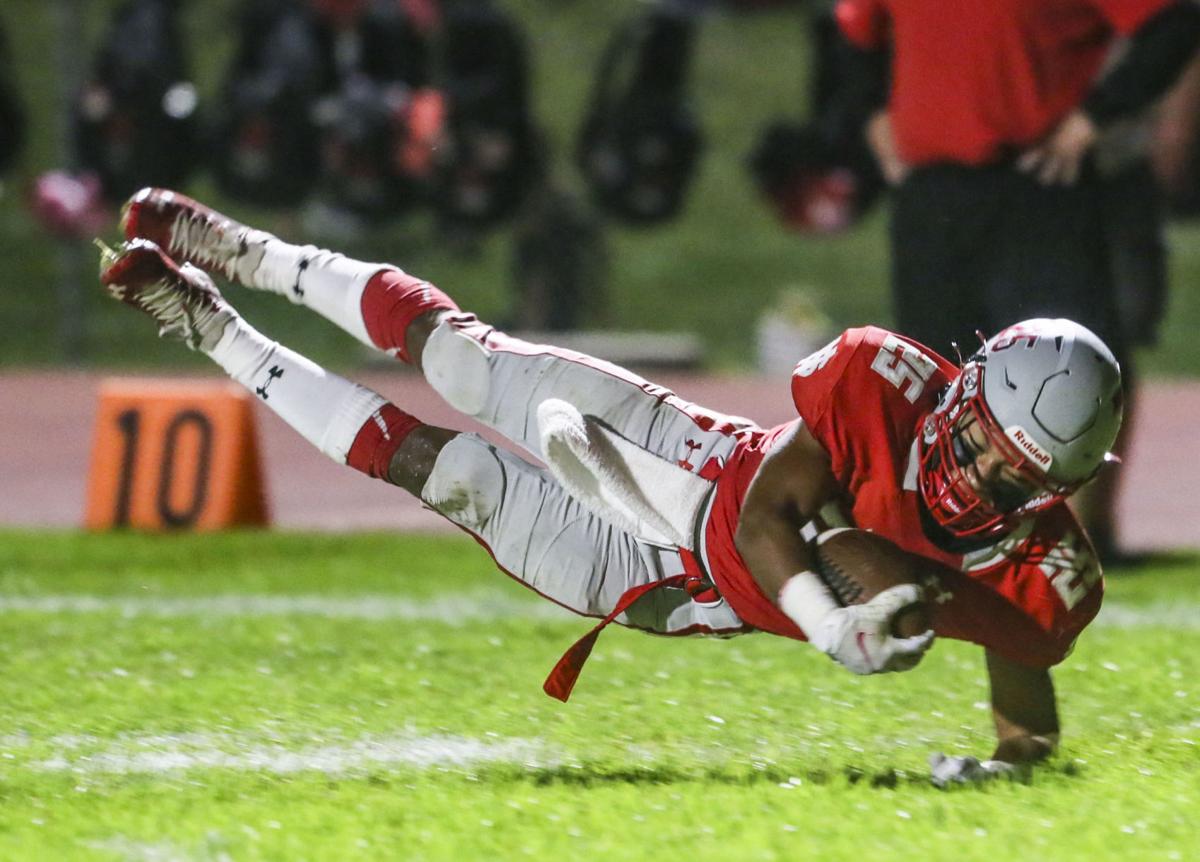 North Scott's Darnell Butler (25) leaps into the end zone for one of his two touchdowns Friday night in the Lancers' 38-14 win over Davenport Assumption. 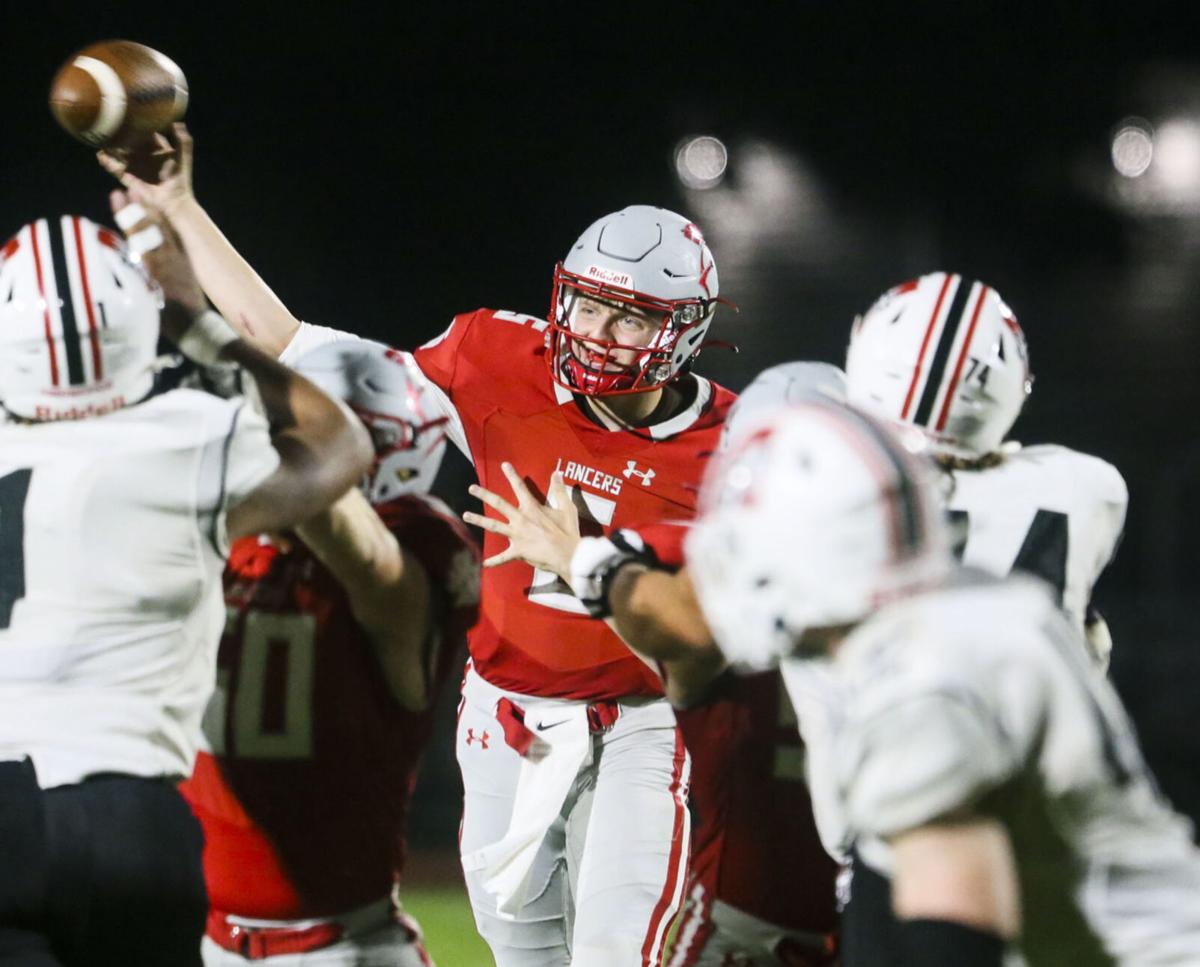 North Scott's Grayson Juel (5) completes one of his 24 passes Friday night in the team's win over Davenport Assumption at Lancer Stadium. 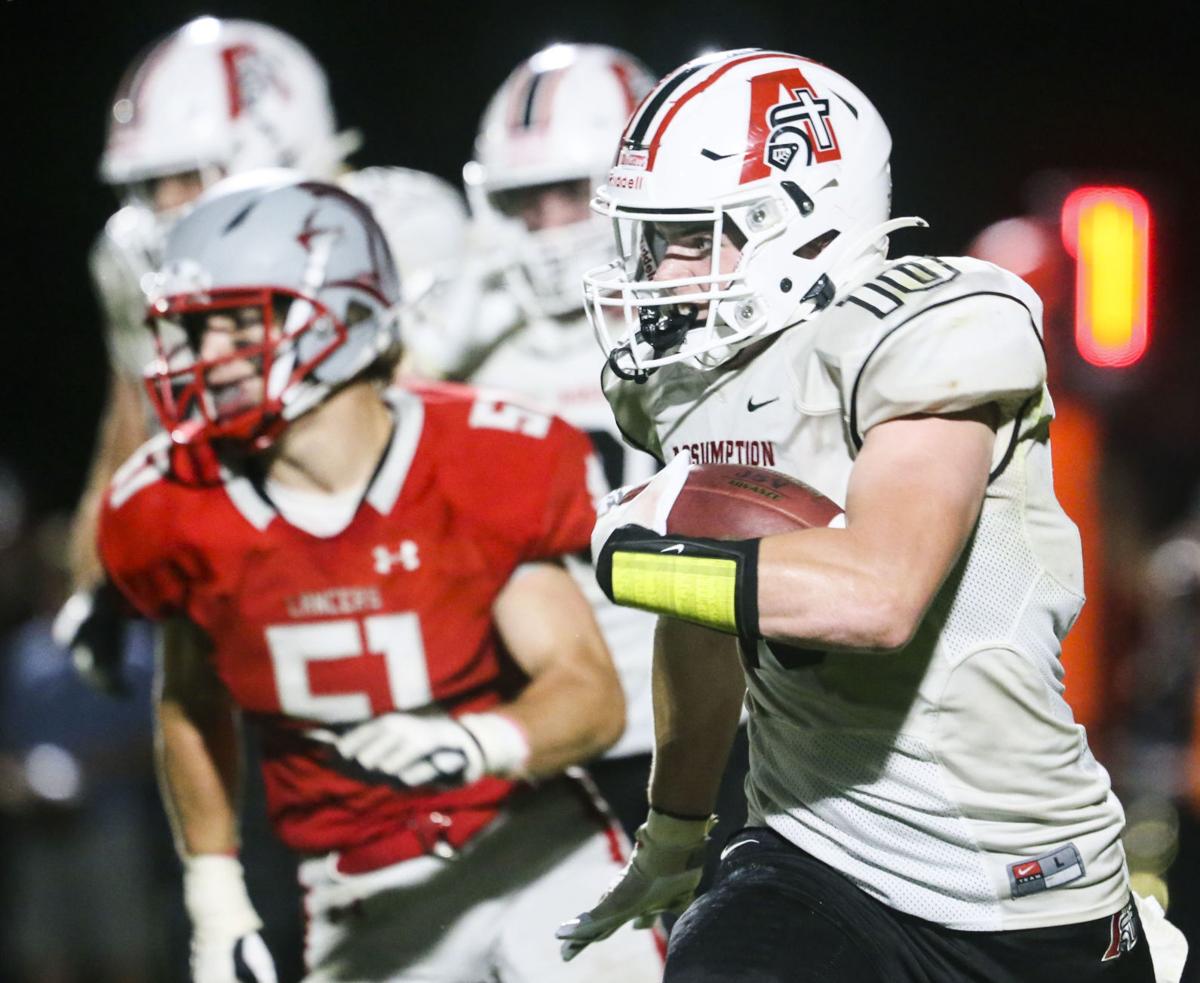 The rematch required no such dramatics.

Class 4A third-ranked North Scott used an efficient passing game and came up with four takeaways on defense to roll past 3A sixth-ranked Assumption 38-14 Friday night at Lancer Stadium.

“This was a big game-changer for the rest of the season,” North Scott defensive lineman David Borchers said. “What we’re seeing right now is just a great football team, and the crazy thing is we can still get better.”

Quarterback Grayson Juel completed 24 of 29 passes for 246 yards and four touchdowns as the Lancers (3-0) have outscored their first three opponents 112-34.

The Lancers used the whole field to wear down the Knights’ defense as Juel connected with eight receivers. Most of the throws were short tosses in the flat and bubble screens.

“They are very good at what they do,” Assumption coach Wade King said. “They’re so solid up front, so it is hard to get a lot of pressure on them. They got into a tempo game with us, which I would do as well.

“That’s a sign of a good team. They poured it on when they saw us reeling a little bit.”

Turnovers and field position dictated a lot of the game.

North Scott picked off Assumption quarterback Ayden Weiman three times. The Lancers started six of their first nine possessions on at least their own 40 or in Knights’ territory.

Assumption, meanwhile, started every first-half drive inside its own 25-yard line.

“The kicking game and turnovers played a big part in that,” North Scott coach Kevin Tippet said. “When we play well versus Assumption, we win the kicking game. We put a lot of effort into that this week.”

Juel, who has thrown 12 touchdown passes versus one interception so far, connected with Jakob Nelson, Darnell Butler and Oliver Hughes for first-half touchdown passes. Hughes had another touchdown reception midway through the third quarter to stretch the lead to 28-7.

“We thought Assumption’s strength defensively was its inside six,” Tippet said. “They did a good job defensively the first quarter, but we started figuring it out. We got the ball to the perimeter and to our skilled guys.

“Our receivers did a great job of blocking on the perimeter allowing guys to pick up yards after the catch.”

Nelson had six grabs for 76 yards, Hughes hauled in six catches and Butler had four receptions.

“A lot of it is, the defenses have no idea how to play us right now,” Hughes said. “We can basically do everything.”

Assumption never could get much penetration against North Scott’s defense.

Other than Weiman hitting John Argo in stride for a 77-yard touchdown catch in the first quarter, Assumption was bottled up most of the night.

The Knights had only four first downs through the first three quarters and were limited to six rushing yards in the opening half.

Borchers, already with offers from a handful of FBS programs, was dominant on the defensive front. Cole Jennings had a pair of interceptions and Adam Link recorded one in the first half.

“We were lights-out,” Borchers said. “I got to give a lot of thanks to our defensive coordinator Tim Brunkan. The game plans he comes up with each week are fantastic.

“We wanted to stop the run and just be more physical than the other team.”

Weiman and Angelo Jackson couldn’t finish the games because of injuries. The Knights have a short turnaround with a Thursday night home game against state-ranked Solon.

“We got some guys banged up tonight,” King said, “so we’re hoping for good news on that. It doesn’t get any easier next week with Solon coming into our place. We’ll regroup and get ready to go.”

North Scott, meanwhile, has a stiff test at 3-0 Cedar Rapids Xavier next Friday, another team it saw in its run to last year’s state championship.

“We’re doing some good things, but like any coach, we made a lot of mistakes in the first half offensively with missed blocks and wrong assignments,” Tippet said. “The key for us is being humble and trying to get better.

Moline captures its first Western Big 6 title since 2018 with dominating victory over Sterling. The Maroons' 38-7 win was its first over the Golden Warriors since they joined the conference in 2019.

Rusty VanWetzinga won his 100th game as the football coach at Pleasant Valley on Friday, a 28-14 win at Dubuque Senior that was a team effort.

Rock Island's powerful offense roared to a resounding victory by pulling away from Geneseo 48-7 during this Illinois football game.

This past spring, the Erie-Prophetstown and Monmouth-Roseville football teams combined to win just one out of nine games.

CLINTON — Jai Jensen admits he was not ready to be Clinton High School’s starting quarterback two years ago. It was out of necessity that Jensen was thrust into the spot as a sophomore.

There is no denying that Alleman football has had a tough year, but the team has found positives in its season.

For one, that there is a team at all. And that two-way star Charles Jagusah is on it.

North Scott's Darnell Butler (25) leaps into the end zone for one of his two touchdowns Friday night in the Lancers' 38-14 win over Davenport Assumption.

North Scott's Grayson Juel (5) completes one of his 24 passes Friday night in the team's win over Davenport Assumption at Lancer Stadium.