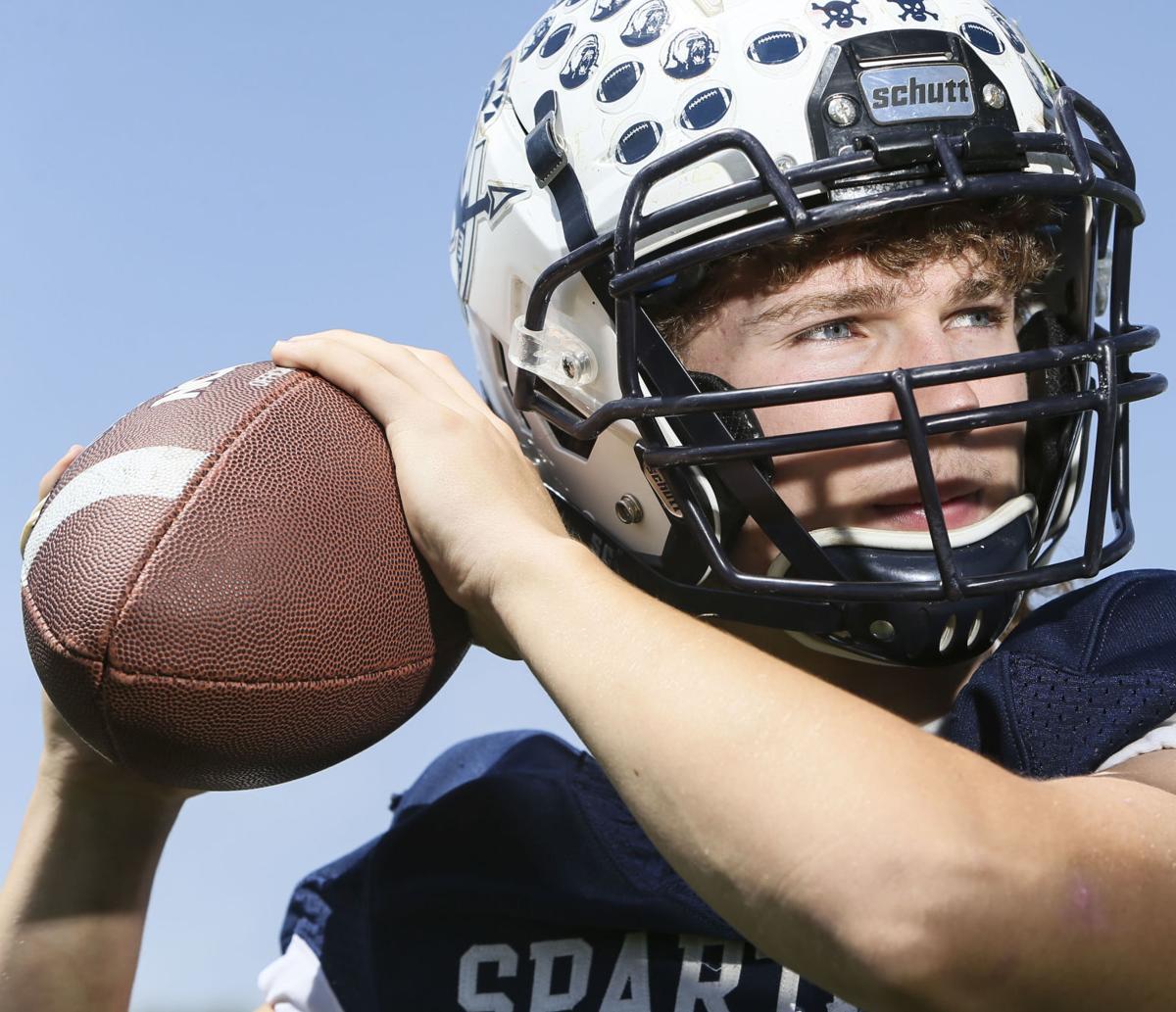 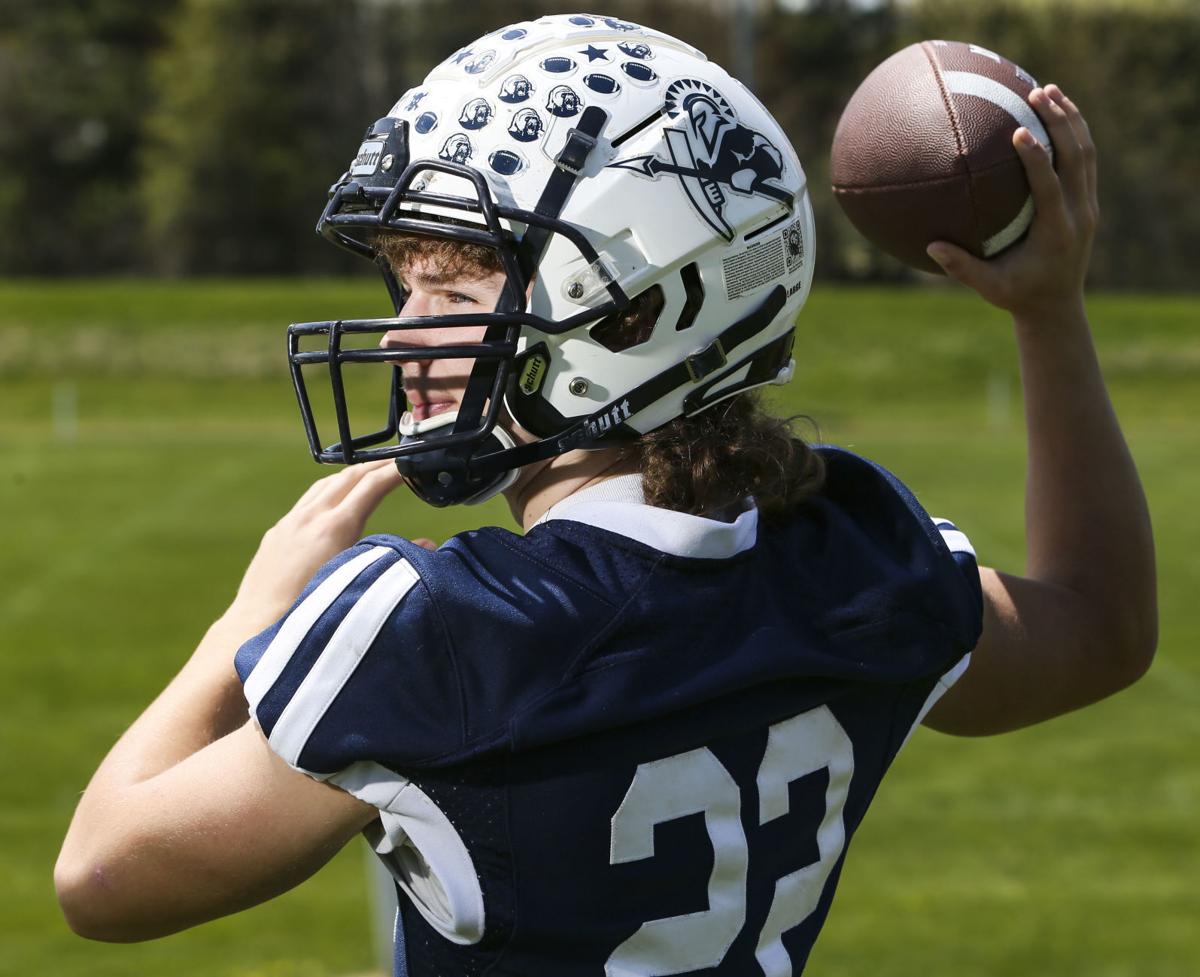 CAMBRIDGE — Throughout his entire football career, Colton Stahl had always lined up as a running back. He never had to take any snaps from under center.

That changed this past season when the Cambridge High School senior found himself pressed into service as the starting quarterback for the Ridgewood co-op to succeed graduated starter Logan Nodine.

"It was due to personnel," Ridgewood head coach Bruce Redding said. "We had our freshman, Riley Catour, who is good but was a little raw; it was hard to match 'Chip.'

"We knew (Stahl) had the talent to do it; the only question mark was his passing ability."

As it turned out, this week's Illinois Pacesetter answered any questions about his ability to throw the ball throughout a season capped by last Friday's 17-of-26, 256-yard passing performance in the Spartans' 54-30 win at United. The 5-foot-7, 170-pound standout also threw for three touchdowns along with rushing for 148 yards and one touchdown on 12 carries.

Not be be outdone by his offensive output, Stahl also added eight tackles from his outside linebacker slot after posting 14 stops the week before in a 44-14 win over Mid-County, a game in which he hit on six of 10 passes for 100 yards and three TDs, ran for 101 yards and two scores and returned a punt 51 yards for a sixth touchdown.

"Once we got 'Chip' in the role, he looked like a natural," Redding said. "He's very athletic, and he was very comfortable with it."

For Stahl, the preparations to play quarterback began last summer.

With the football season being delayed and ultimately pushed to the spring from the autumn, that gave him even more preparation time.

"I had a lot of time to practice, which helped a lot," said the grandson of longtime Cambridge coach Larry Stahl, a member of the Illinois Football Coaches Association Hall of Fame. "All the footwork was a little different, so (when the season started), I was still getting used to it.

"I pretty much just played like a running back and ran the ball a lot. After the first couple of games, I got used to being the quarterback, and that helped me relax back there."

That said, Stahl gradually got more comfortable putting the ball in the air, as his 26 attempts last week proved.

"Yeah, that was up there. I didn't realize I threw it that many times," said Stahl, whose efforts helped Ridgewood record its third straight winning season by finishing 4-2, good for a three-way tie for third place in the Lincoln Trail Conference with Mercer County and Ottawa Marquette.

Perhaps the biggest of the Spartans' victories this spring came in the third week, when they rolled to a 41-14 home victory over an Annawan-Wethersfield club that was ranked second in Class 1A at the time and went on to capture its third straight LTC championship.

In that win, Stahl completed 10 of 15 passes for 180 yards and two touchdowns and finished with 263 total yards. He started the game by hitting on six of his first seven throws.

"We've wanted to beat them after a tough loss to them last season," Stahl said, referring to the Titans' 44-0 shutout victory in the fall of 2019. "We knew if we played sound, we could do it. We came out and got it done that night."

Before becoming the Spartans' signal-caller, Stahl had an impressive varsity debut season in 209. Racking up 837 total yards with 11 touchdowns along with 59 tackles, he helped Ridgewood to a 6-4 finish and a berth in the IHSA Class 1A playoffs, the first for the co-op since it began in 2010.

Even though a return trip to the postseason was not to be this spring, with the season shortened and no playoffs, Stahl was happy that he and his classmates got the chance to hit the gridiron one more time. He hopes the success of these past few seasons will help to motivate their younger teammates.

"It was fun. We had a good time and were happy we got to play," he said. "I think we could've made a run (in the playoffs) this year, but we made the best of it. We just looked forward to playing this season, and we wanted to come out with a winning record.

"I think we gave the younger guys a lot of hope; we pushed them hard to go in the weight room and work, and I hope they keep it up. I think we should be good for the next few years to come."

Role models: "My dad and my Papa (grandfather Larry Stahl)."

Alleman High School football coach Todd Depoorter retires from the program he has been a part of for 32 years, the last six as head coach.

The Western Big 6 Conference has released its all-conference teams for football, volleyball and boys soccer.

STERLING, Ill. — The United Township High School football team defied the odds to the very end of this pandemic-altered season.

Big 6 football by the numbers heading into final week

Just for giggles this week, let's take a look at some of the things statistically that stand out heading into the final week of the COVID-19 pandemic adapted Western Big 6 Conference football season.

ANNAWAN — With no state championship to pursue this season, the Annawan-Wethersfield football squad was more than happy to play for a Lincoln Trail Conference crown Friday night.

SHERRARD — Granted, this has been a far from usual regular season for area prep football teams.