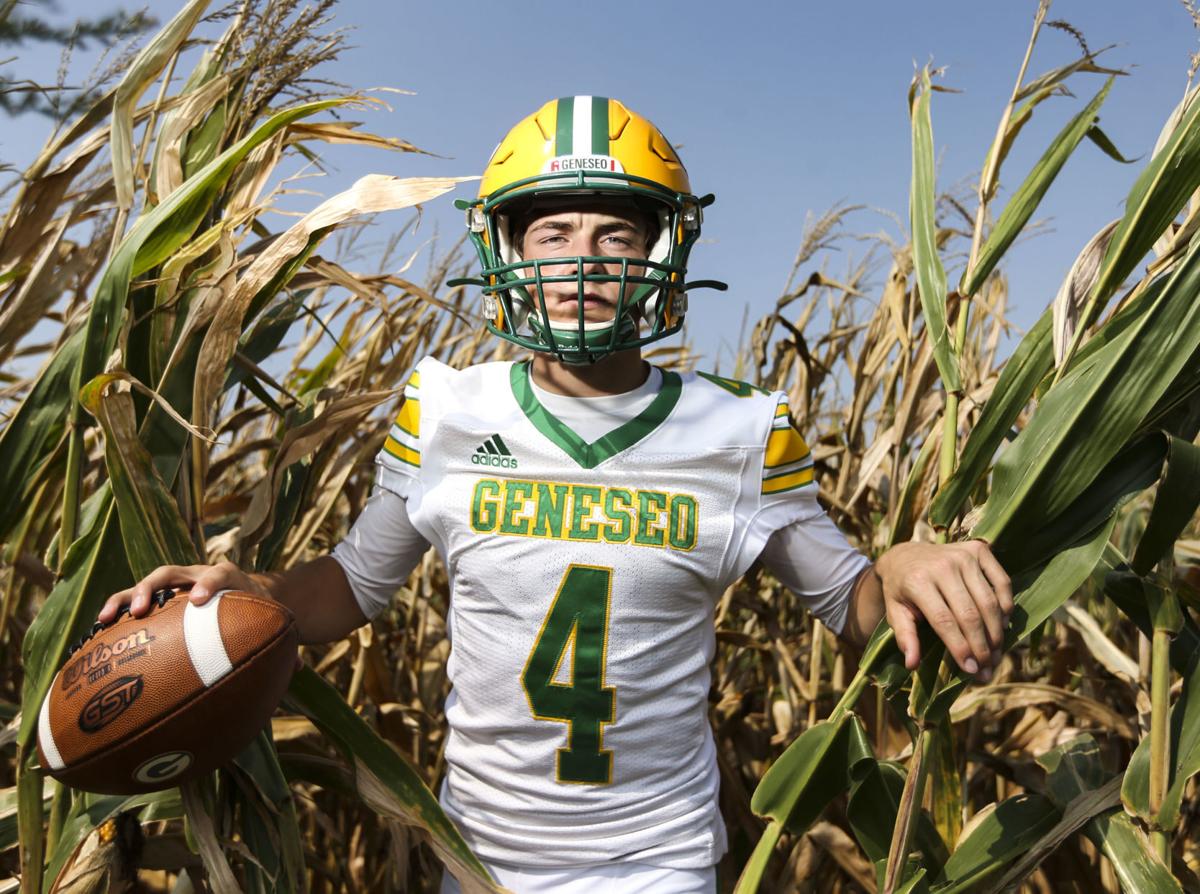 Geneseo quarterback A.J. Weller is this week's Illinois Pace setter. He threw for four touchdowns and more than 250 yards in last week's win over Sandwich. 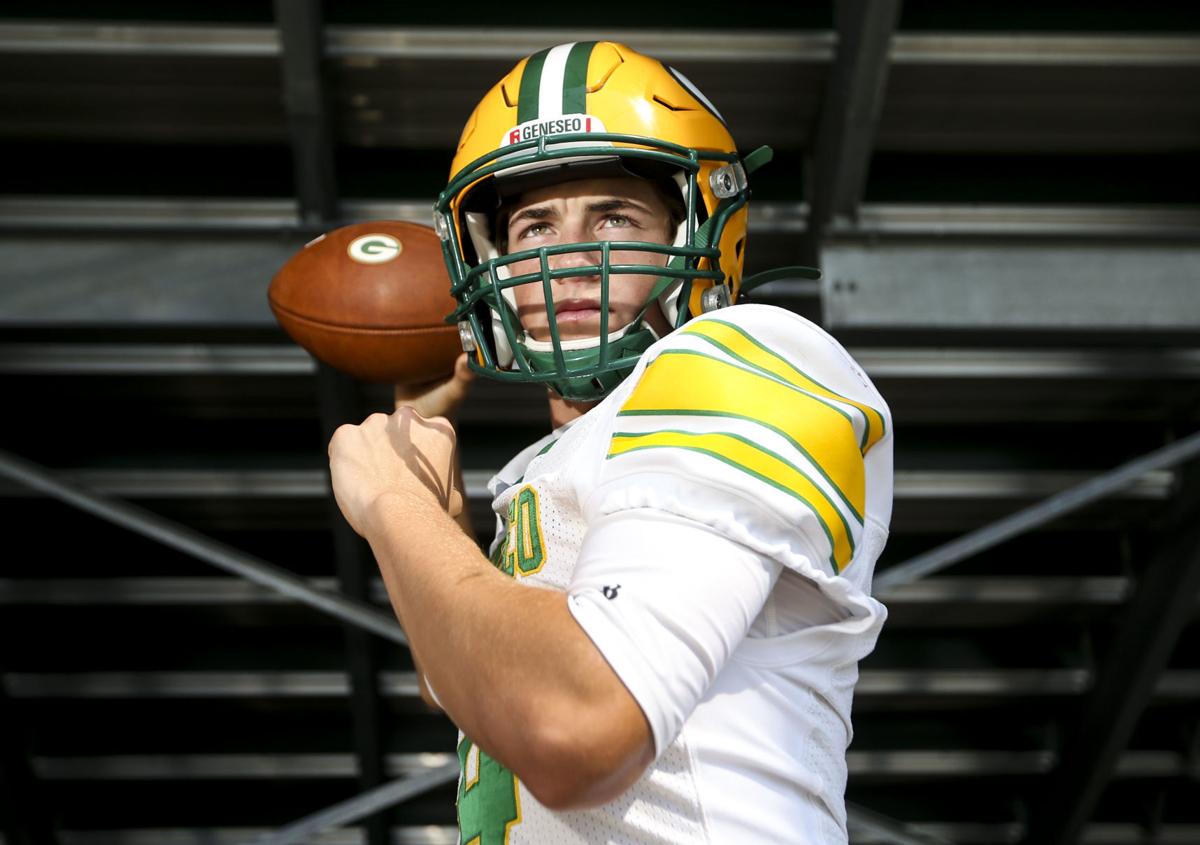 Geneseo quarterback A.J. Weller earned the starting quarterback spot at the end of fall camp and has not disappointed in the first two weeks of the season.

The Maple Leafs instituted the spread offense in the 2021 spring season after famously running the Wing-T formation since at least 1962, started by longtime Geneseo and Augustana College coach Bob Reade.

Now in 2021, sophomore quarterback A.J. Weller has led an offense to unprecedented heights in the passing game.

The two-sport varsity athlete, also the starting shortstop for the baseball team, has thrown for five touchdowns this season, highlighted by the four touchdowns and more than 250 yards he passed for against Sandwich last Friday in a 58-7 win.

It was a game that Weller could have never seen coming because just three weeks ago, he didn’t even know he would be the starter. Nor was he ever told directly.

“In practice I started to see my reps go up,” Weller said. “We have different teams that run separate reps, and I noticed that I was on the first team. I didn’t really know I was going to start at quarterback until the week before our first game.”

It was a game that was unmemorable for Weller, who finished 2 of 3 passing with 0 yards, but one in which he secured that symbolic and everlasting first touchdown pass. A pass that could have almost been mistaken for a run.

“My first touchdown pass was technically a shovel pass against Comer,” Weller said. “We ran it on the inside and our guy took it to the house. It was really cool.

“I sprinted to the end zone and tried to give everyone a high-five. Yelling, screaming, just trying to have a blast and get ready for the next drive.”

The celebration continued the next week after four more touchdowns.

The final, a 77-yard strike to junior receiver Jaden Weinzierl to make it 38-7 with 3:35 left in the third, solidified the win and reserved Weller’s spot on the bench to rest for the remainder of the game.

A stat line that many people outside of Geneseo might not have seen coming from Weller, but one that didn’t surprise senior two-way lineman Nathan VanDeWoestyne.

“The first time I saw A.J. play quarterback was during the end of the spring season,” VanDeWoestyne said. “They moved him up this year during summer practices. We had three guys going after that quarterback position. He really stepped up. He’s shown he’s earned that spot and will take anything on.”

Weller’s passing talent was heralded by his teammates, but so was his ability to run and his leadership skills. A character trait that was not lost on his peers as he improved from Game 1 to Game 2.

“He really got his feet under him and he started to be able to run the ball,” VanDeWoestyne said. “He didn’t just sit in the backfield and pass it, he showed he could use his feet and be a runner as well to help the team and that really impressed me. He’s not afraid to take a hit.”

The spread offense requires a lot out of the quarterback. The amount of options that become available when three, and sometimes four, receivers line up outside require not only an extensive memory of the playbook, but fast-thinking skills when plays develop against opposing defenses.

“With the change of the offense, the quarterback position has really evolved (at Geneseo) from somebody who the majority of the time was just standing there handing off the ball, to a guy that has to go through reads and progressions and make good decisions," VanDeWoestyne said. "And AJ has all those qualities to do all of that.”

So far, VanDeWoestyne is right. The Maple Leaf offense has scored 107 points in two weeks, the most in the first two games since 2015 when they scored 110 and eventually reached the Class 4A quarterfinals.

“I think that he can really see what’s going on and is a really intelligent player,” Geneseo coach Larry Johnsen Jr. said after Friday’s victory over Sandwich. “Meaning that he doesn’t just rely on athletic ability — he’s able to see things and able to process information fairly quickly right now and that will get even better with time.”

The time is now for Geneseo, which hasn’t had a winning record since a 6-4 finish in 2016 that resulted in a first-round playoff exit. But this Geneseo offense is different. Overhauled, more accurately. And the players are feeding off the new possibilities.

“The new offense gives a lot of new positions and opportunities for guys to show what they can do, wide receivers especially,” Weller said. “I think it gets guys excited and makes us want to work harder and practice it. It gives us a lot of confidence about all the different things we can do now offensively.”

One reason for the early offensive success has been attributed to the change in scheduling due to the COVID-altered spring season. Instead of having the entire spring season off, players had only about six weeks between when the season ended and when summer offseason work began. It was a convenient amount of constant practice time for a team learning a new offense to continue to work out the kinks.

“We spent all summer together, and a lot of the spring, so it was like one big season for us,” VanDeWoestyne said. “We’ve all built off the spring and summer and will use the chemistry we’ve created to make this a great season.”

With the perfect start to the season already in the books, Weller admits his nerves that were present before the first game have already started to vanish after the two dominating victories.

“My confidence has definitely gone up,” Weller said. “I think the entire team’s confidence has gone up. We all understand that conference play is going to bring in a lot more competition and we have to stay true to ourselves to get ready for this week because we know it’s going to be a challenge.”

Geneseo’s new quarterback and young spread offense will be put to the test Friday in a battle against United Township, the only other remaining undefeated Western Big 6 Conference school.

It's a challenge that Weller won't back down from.

Favorite NFL player and team: Tom Brady and the Buccaneers

Best piece of advice: To have fun and be yourself.

UTHS quarterback Matthew Kelley came back from injury to lead the Panthers on two scoring drives in the final 3:27. He finished with 223 yards and two touchdowns. The win moved UTHS to 3-0 for the first time since 2001.

DEWITT — The Central Dewitt football team took advantage of Clinton mistakes in the second half of a 44-28 home win on Friday night.

It was billed as a Class 3A top-10 matchup. It turned into a lopsided affair.

The River Hawks are off to a 3-0 start, but the fourth-ranked team in eight-player football has its eyes on the ultimate prize.

Geneseo quarterback A.J. Weller is this week's Illinois Pace setter. He threw for four touchdowns and more than 250 yards in last week's win over Sandwich.

Geneseo quarterback A.J. Weller earned the starting quarterback spot at the end of fall camp and has not disappointed in the first two weeks of the season.