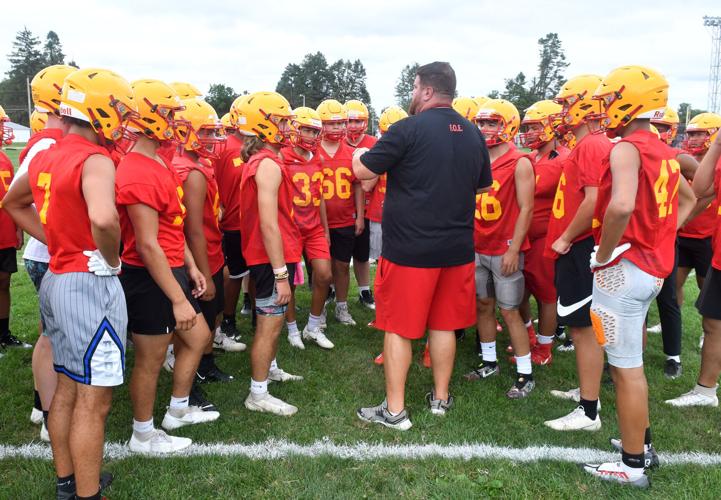 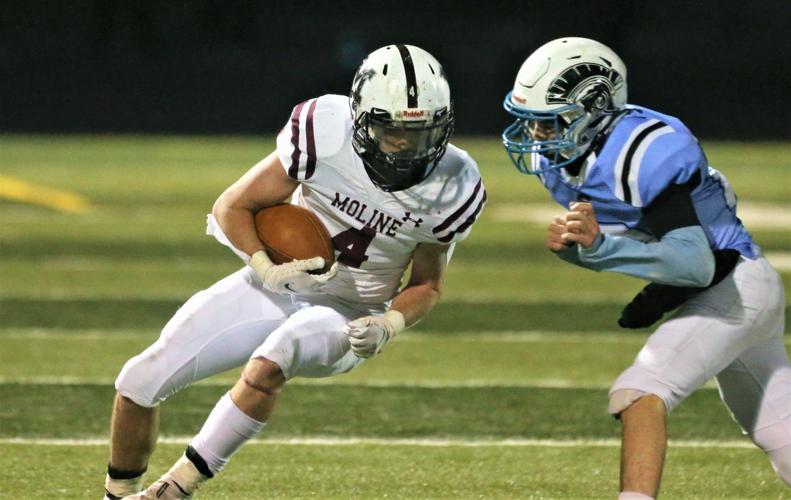 Moline's Riley Fuller prepares for a hit from a Willowbrook defender during a Class 7A playoff game last November. Fuller is one of the keys to Moline's offensive success this season. 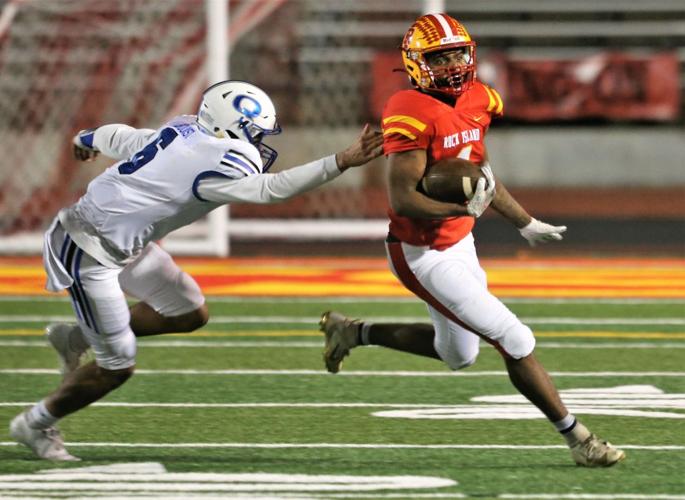 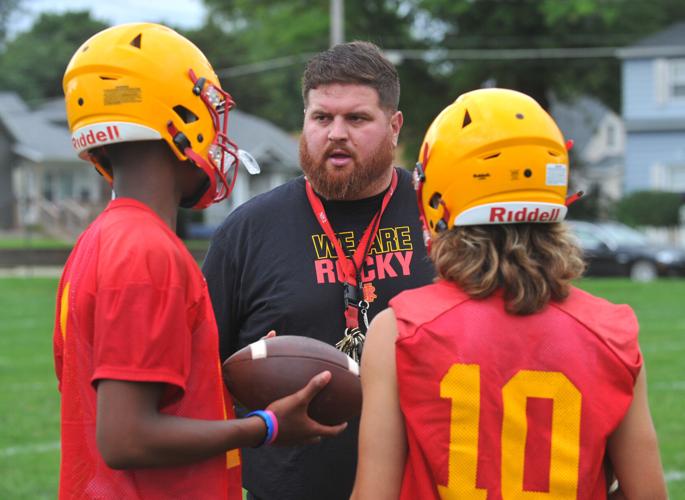 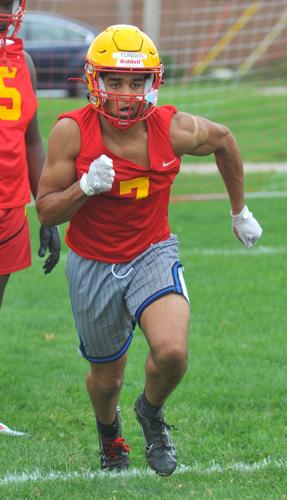 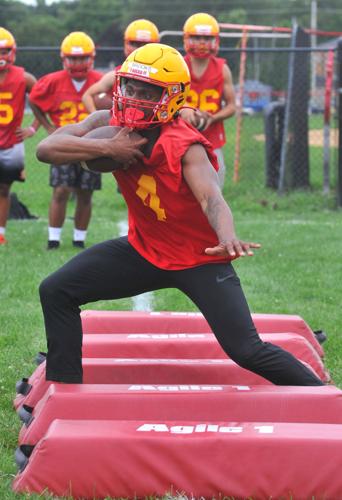 Monday marked the start of the 2022 fall season in all sports with the first day of practice for Western Big 6 Conference schools.

Moline ran the table with a perfect 7-0 record in conference play last year, but will have a much different looking team after the graduations of quarterback Alec Ponder and wide receiver/safety Matthew Bailey, who each broke offensive school records at their respective positions.

But Moline isn’t the only school with question marks. Read about what each team needs to answer before kicking off August 26th.

The Rock Island Rocks averaged 37 points per game last year en route to a 6-3 regular season finish and home playoff game, but lost a majority of their offensive production to graduation.

The senior trio of quarterback Eli Reese, wide receiver Marieon Anderson and tight end Kai Rios will be hard to replace in 2022. Reese led the WB6 in passing yards (1,456) and touchdowns (18), while Anderson caught a team-high 10 touchdowns on 671 receiving yards. Rios had a league-high 29 catches on 328 yards in WB6 action.

Then-sophomore quarterback Conner Dilulio saw limited action at the end of games, but Rock Island seems destined to find most of its yards on the ground.

Senior running backs Darius Tongo and Quonterrion Brooks will lead the charge in the backfield after successful 2021 campaigns. Brooks was fifth in the WB6 with 478 rushing yards and the duo combined for nine touchdowns in league play. The Rocks will rely on senior offensive lineman Jace Bennett — a two-way player who earned all-conference and all-metro honors last season — to clear a path for the run game.

The defense will need to be addressed after allowing 94 points to Springfield, which was an IHSA 6A playoff record. It will be a young group after the Rocks lost four all-conference defense selections, but Rocky has the depth to fill holes on its roster.

Can the Maroons repeat?

Moline’s 2021 season was one for the history books.

The Maroons swept through the WB6 and ended the regular season at 8-1 before a dramatic 48-42 playoff victory over Hampshire. Moline held a 26-17 lead over Willowbrook at halftime, but an injury to Bailey — which occurred on a diving touchdown catch — not only kept Moline scoreless in the second half, but kept the Maroons from reaching the third round for the first time ever and winning 10 games for the first time since 1906.

But the story isn’t finished.

Mike Morrissey’s squad won’t have its top two offensive weapons, but a plethora of running backs and a talented offensive line greet a run-oriented Moline team in 2022.

Senior Riley Fuller ran for 918 yards and eight touchdowns, which were second-most in the WB6 to earn first team all-metro and All-WB6 honors. Pablo Perez, Christian Raya and Grant Sibley will also have a lot of opportunities on the ground or in the air.

Mark Runkle and Nate Parker were first-team All-WB6 selections from the offensive line last season, but the team also returns Carver Banker and Caleb Singleton on an offensive line that could be one of the best in the area.

But a lot of the success last season came from the defense. Moline allowed just 14 points per game and held six opponents to seven points or less, including three straight shutouts against Alleman, UT and Galesburg.

Singleton and Raya are two-way players who earned first-team All-WB6 defensive nods and the Maroons will look to continue that success in 2022.

Moline kicks off its season on Friday, Aug. 26th against St. Laurence at home.

The Panthers have steadily improved under coach Nick Welch, but the playoffs have still been elusive for United Township.

UT hasn’t played in a postseason game since 2001, but had a winning record in 2020. A 3-0 start ended with a 4-5 finish last year, but the Panthers are determined to snap the playoff drought this season.

Junior quarterback Matthew Kelley threw for 932 yards and seven touchdowns in WB6 play last season, which is only behind Quincy’s Adon Byquist (969) for the most of any returning quarterback. The Panthers lost Loren Arrington and Damahz Slater, but bring back John Manso, Jacob Gutierrez, Korey Randle and Oscar Perez who can all help spread the field offensively.

Kelley was out for UT’s 17-8 loss against Galesburg last season or the postseason drought could have ended, but the Panthers plan to use his experience and ability to their advantage against Moline, Rocky, Sterling and potentially Alleman who face major changes under center.

What can Dieudonne do in Year 2?

The Alleman High School athletic rebuild is still ongoing, but the football team will be improved in 2022. Fritz Dieudonne announced in April that unlike last year, the Pioneers will field both frosh/soph and varsity teams this season.

When Dieudonne was hired in mid-June of 2021, there were just 12 players on the roster. He recruited a little over 20 for last season, but will have around 30 this year — including University of Notre Dame commit Charles Jagusah.

Alleman returns running back Andrew Torres and quarterback Quentin Fonseca, who will be tasked with creating plays for the Pioneers.

Development and recruitment still top the to-do list for Alleman, but the school is heading back in the right direction.

The Maple Leafs dropped games to UT and Quincy by a combined six points, and joined Quincy as the only WB6 teams to keep the final score within two possessions of Moline, but ended the 2022 season in disappointing fashion.

Geneseo started the year 2-0, but dropped six of its last seven to end the year at 3-6. The Maple Leafs haven’t made the playoffs since 2017 following a stretch between 2013-15 that included three-straight 10-win seasons and a state championship appearance.

If Geneseo was able to win at the end against UT and Quincy, the Maple Leafs’ playoff fate would have been determined by playoff points, but the team is looking to take a step forward in 2022 with junior quarterback AJ Weller.

Alleman wasn't happy that it had to forfeit against Moline. The team felt like it was improving after two positive showings, but the goal now is to end the year on a strong note.

Moline dominated the first half to beat United Township 47-14 on Friday. The Maroons are now 4-0 in WB6 play. Riley Fuller had 171 total yards and four touchdowns by halftime.

State scores: See football finals from all around Illinois in Week 6

Want a score from outside the area? You can find it here.

A capsule look at the Quad Cities metro games for Week 6 of the high school football season.

Happy homecoming: With father back from deployment, Wilson shines in PV's rout

Pleasant Valley compiled more than 360 yards on the ground Friday night as it beat crosstown rival Bettendorf 44-14 at Spartan Stadium.

A Rock Island High School football team defense that has struggled at times came up big in Friday night’s 34-14 win over Galesburg at Almquist Field.

A capsule look at Friday's football matchups in the Illinois area:

The storybook season continued Friday evening for the Davenport West High School football team as the Falcons rolled to a 28-10 victory over the hosting Dubuque Senior Rams at Dalzell Field.

Geneseo started slow, but a big second quarter lifted it to a 47-0 win over Alleman Friday.

The doctor who examined Dolphins QB Tua Tagovailoa has been fired

The doctor who examined Dolphins QB Tua Tagovailoa has been fired

Moline's Riley Fuller prepares for a hit from a Willowbrook defender during a Class 7A playoff game last November. Fuller is one of the keys to Moline's offensive success this season.