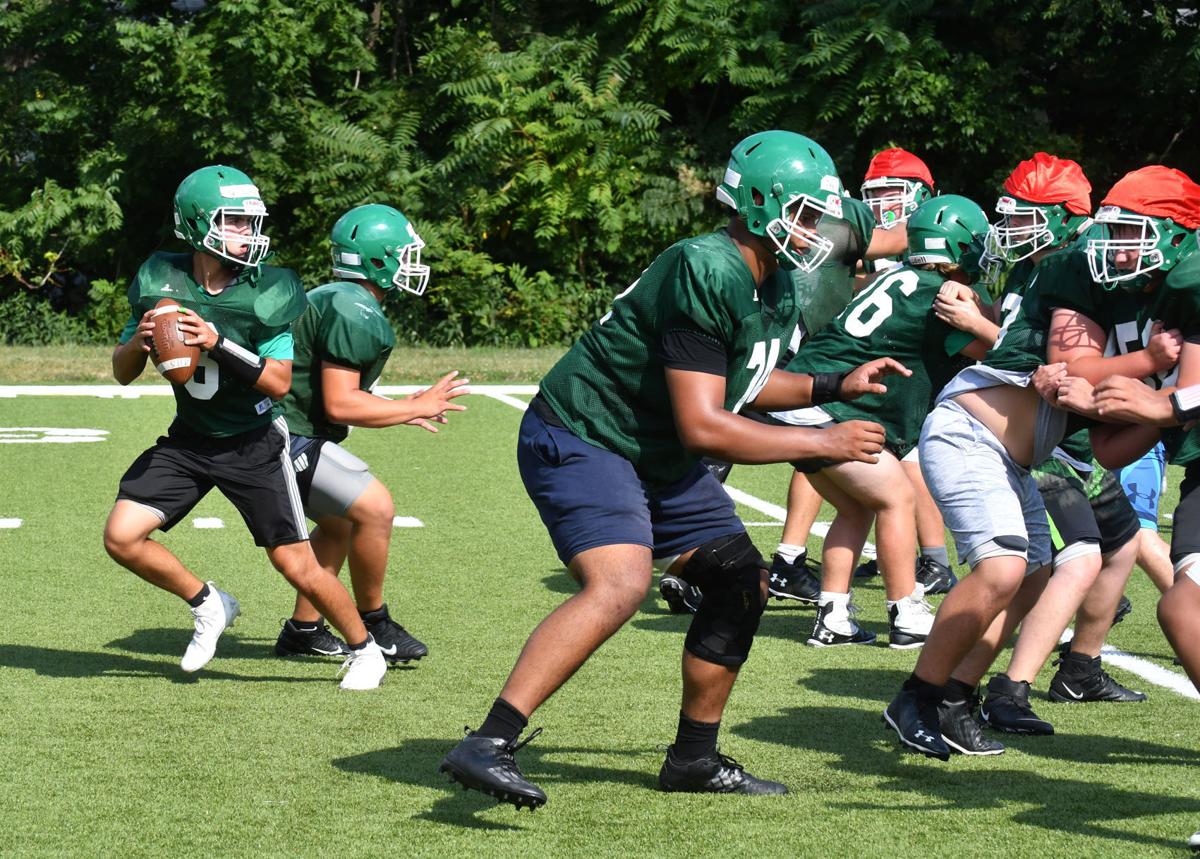 With Charles Jagusah blocking, Alleman quarterback Quentin Fonseca drops back to pass during a practice session earlier this season. 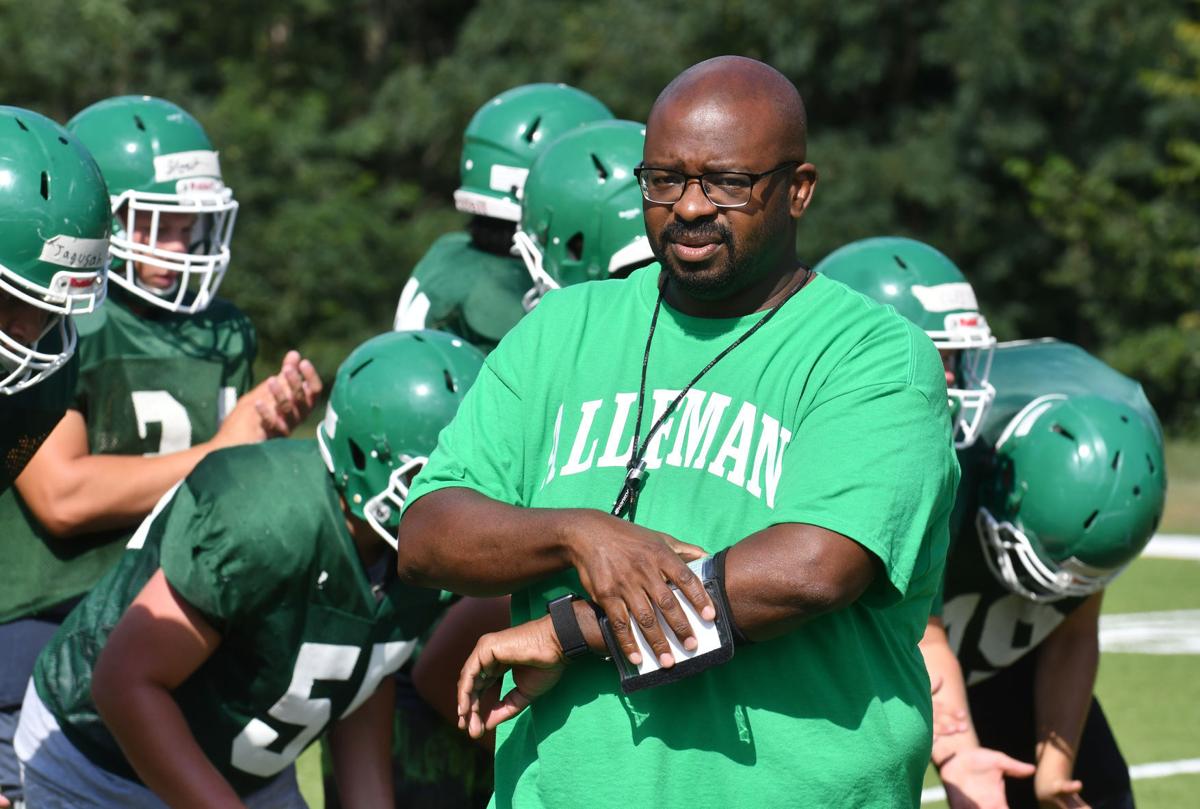 First-year Alleman High School football coach Fritz Dieudonne has worked as an assistant for the past two decades before taking over the Pioneers program this summer. 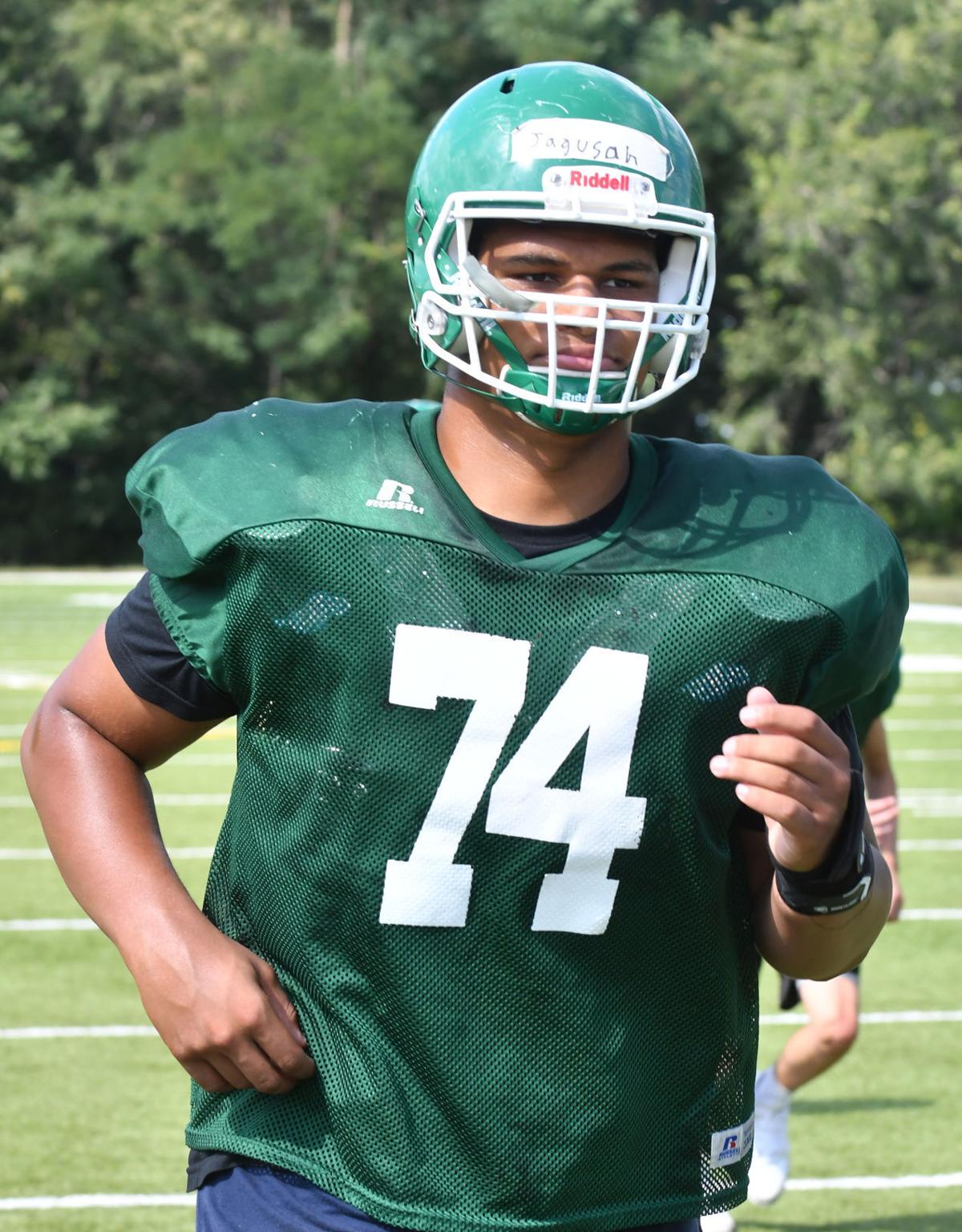 There is no denying that the Alleman High School football team has had a tough year.

And the team isn’t hiding from it either.

But the mood at practice this week, despite being outscored 330-7 this season, was borderline joyous. After a treacherous offseason that saw a mass exodus of players and coaches, this year’s squad is just happy to be able to put on the pads.

“These kids have heart,” Alleman coach Fritz Dieudonne said. “They haven’t taken it for granted that they have an opportunity to play ball. They haven’t let it get to them that they lost a lot of teammates. When I was introduced, I was talking to a room of maybe like 12 guys.”

Alleman went 3-3 in last season’s COVID-19-altered spring season. But between the end of the season and June 14, when Dieudonne was hired as head coach, the Pioneers lost a bulk of their team. Some graduated, but most transferred away after a drama-filled summer with the school's administration.

"I told the players that if there are people out there that should be playing, reach out to your friends. Find out who else can come out here. We’ve had a ton of guys come back to the football program that hadn’t been here in the last couple years. It’s a credit to these players and them going to their classmates and asking them to come back out and rededicate to the football program.”

The number at practice Wednesday was about 25-30 players, a vast improvement from the 12 Dieudonne had to work with on his first day. And they were all focused and upbeat. There was nothing from the players' outward appearances that communicated that Alleman is 0-6.

“Through all of the struggles on the field, we’ve had this group of players stick it out,” Dieudonne said. “I haven’t had kids quit. We’ve had one player who two weeks ago had to step away and it had everything to do with a family situation and being able to be home to care for a younger sibling. Even that young man was upset and crying. These players want to be here. And they’ve continued to improve.”

One of the players that stuck around was two-way star Charles Jagusah. The 6-foot-6, 308-pound lineman towers over everyone at practice, and on the field it’s the same way. Jagusah has 11 Power 5 offers, most notably from Notre Dame, Iowa, Nebraska, Iowa State, Missouri, West Virginia and Minnesota.

“I asked the players why they thought he was getting all the offers and they told me all the same answers bout how he works hard, he’s got size and he’s smart,” Dieudonne said. “I was like yeah, but what is that look like on film? And they really couldn’t tell me what a D-I player is.”

That’s when Dieudonne told a story to his players about Jagusah that explains why he is so special. Geneseo was running a toss play to the large side of the field, purposely trying to avoid Jagusah. But that was a mistake.

“If you watched that play on film, he realized it’s a sweep away from him and despite being the largest human being on the field, he was the fastest guy to the ball,” Dieudonne said. "He was running past our DBs and linebackers to go make the tackle on the sidelines. So all week we talked about where is your D-I effort. It’s not size. There are kids his size walking around in smaller programs or who aren’t even playing football. But for him, it’s the size and the effort he puts on the field that jumps off the screen. It’s why all these college coaches are wanting to see him in action.”

When talking to Jagusah you wouldn’t know he is one of the most highly sought-after recruits in the Quad-Cities area. He was light-hearted at practice, messing with coaches and players to sneak in a few laughs during drills.

“I definitely try to keep it fun because we have had a tough season and I don’t want everybody to be down for no reason,” Jagusah said. “I’m not really the type of leader to scream and yell at everybody. I really just want to get people going the way they need to go and teach them what they need to know. We just have to get better.”

And the Pioneers have gotten better. Dieudonne admitted that the first couple of games were hard to swallow. Alleman was incapable of avoiding both turnovers and meaningless penalties. But recent games have bucked that trend.

“I keep reminding them and even myself, partly for my own sanity, that it was June 14 when I met them,” Dieudonne said. “In that short time we’ve had to install a whole new offense and a whole new defense. We’ve had to come together as a whole new coaching staff. Considering how we started the year, we’ve now had games where we haven’t been flagged a single time or turned it over. It’s a vastly improving team.”

The cultivation of Alleman’s efforts were finally realized against Sterling on Sept. 17. The Pioneers struck for their first, and only, points of the season on a pass from Quentin Fonseca to Jack Ellis to cap an 80-yard drive. The touchdown didn’t do anything to change the outcome, but it was a symbol of hope that marked the progression the team had made in the past two months.

“When we scored at Sterling, they celebrated like we had just won the title,” Dieudonne said. “And I couldn’t even be mad at them. All of us as a coaching staff celebrated because they don’t take it for granted.”

“It was funny when we scored a touchdown because everybody was going crazy,” Jagusah said. “I was like guys … ‘We just lost 49-7,’ but they were like ‘Yeah! 7!’ That was a fun one.”

Reaching the end zone might not mean anything significant in the grand scheme of the things, but the team has used it as a moment to look back on for motivation.

Alleman football is a shadow of its former self, but the people remaining are dedicated to turning the program around. That much is clear.

We start the day off with areas of fog with a chance of morning rain before warming up into the 80s during for the weekend.

With Charles Jagusah blocking, Alleman quarterback Quentin Fonseca drops back to pass during a practice session earlier this season.

First-year Alleman High School football coach Fritz Dieudonne has worked as an assistant for the past two decades before taking over the Pioneers program this summer.