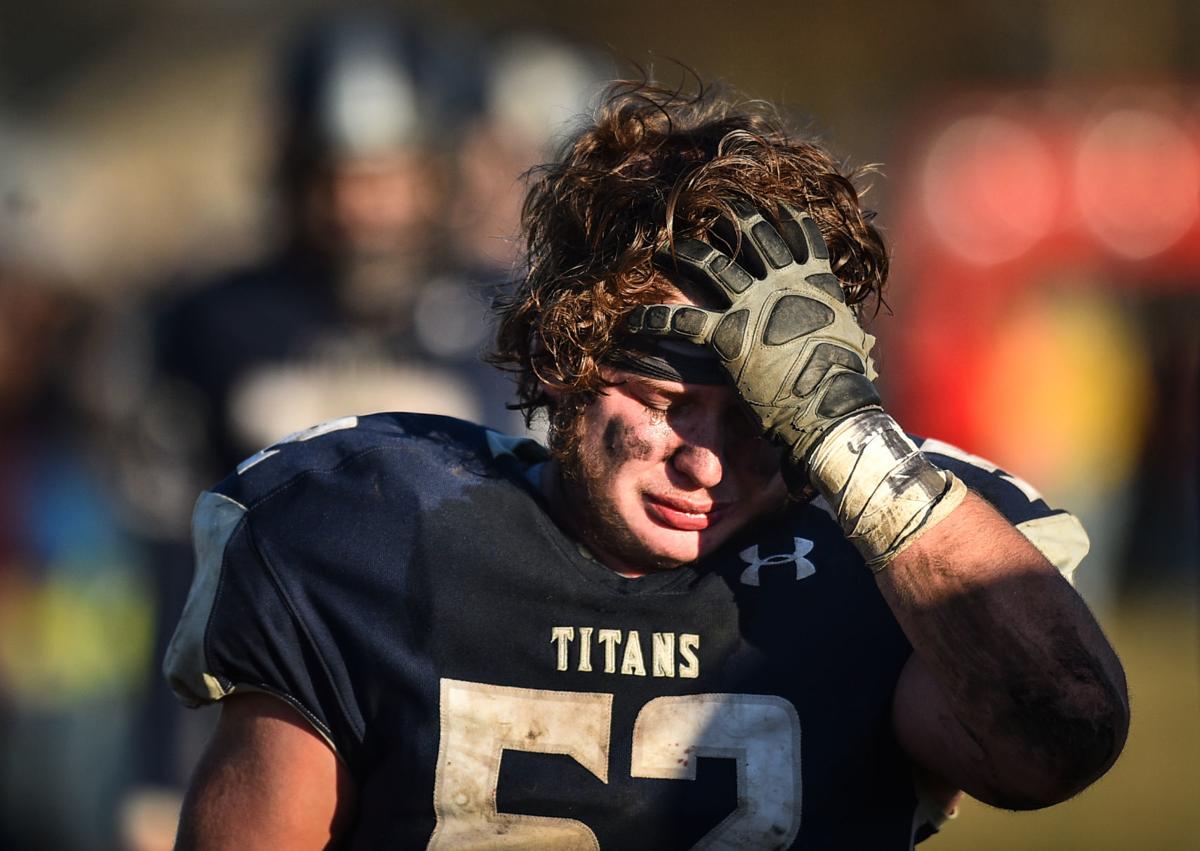 Annawan-Wethersfield's Logan Troxell (52) puts his hand over his face during the final minutes of Saturday's Class 1A state football semifinal against Lena-Winslow in Kewanee. The Titans' season ended with a 44-30 loss. 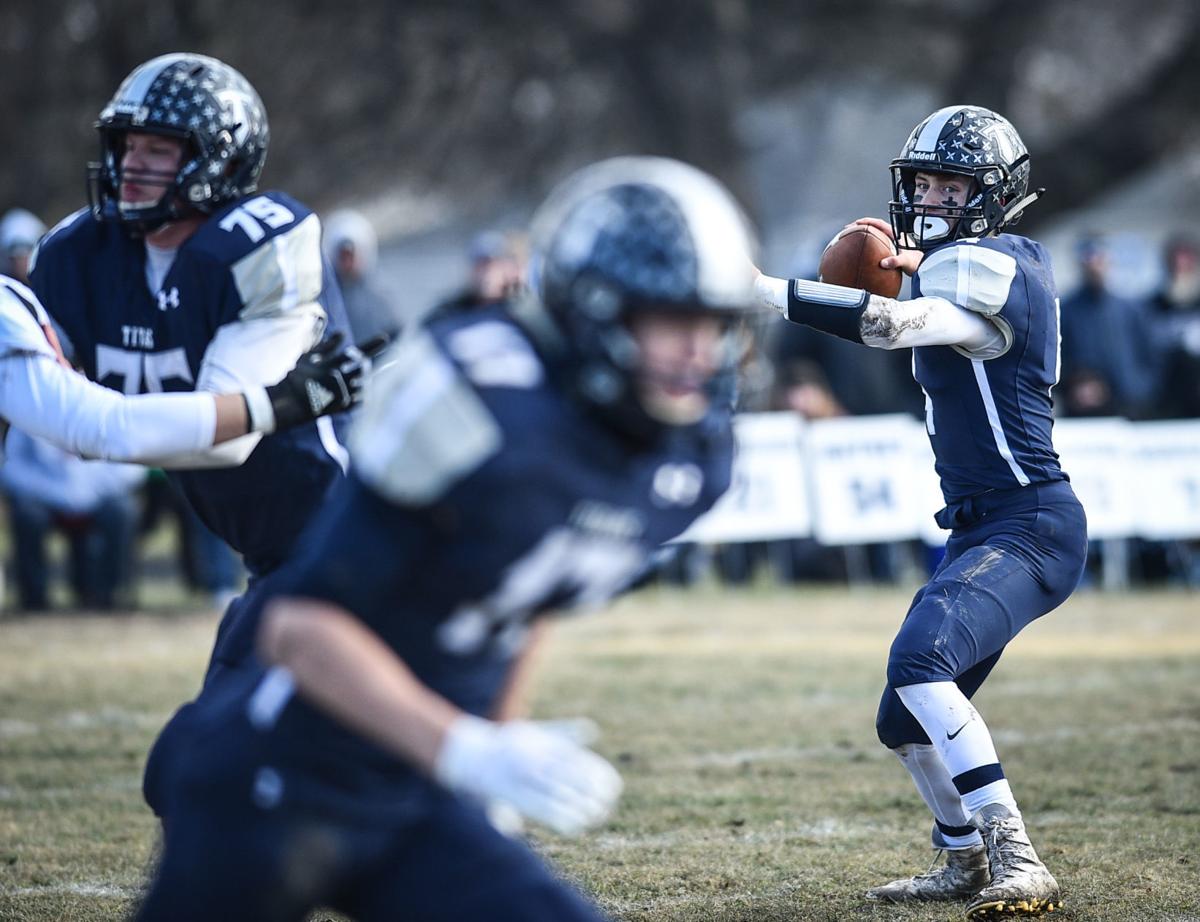 Annawan-Wethersfield junior quarterback Coltin Quagliano gets ready to fire a pass against Lena-Winslow during Saturday's Class 1A state football semifinal in Kewanee. Quagliano threw for 322 yards, but it wasn't enough as the Titans dropped a 44-30 decision.

KEWANEE – Staring at a 24-point deficit to start the second half of Saturday's Class 1A state football semifinals, the Annawan-Wethersfield Titans were anything but uptight.

“We were relaxed,” said A-W junior quarterback Coltin Quagliano. “We played it like a normal game, and we had each other's backs the whole way through.”

With Quagliano throwing three of his four touchdown passes in the second half, the top-seeded Titans cut that 24-point deficit in half twice in the fourth quarter, but a pair of Lena-Winslow TDs in the final period enabled the Panthers to escape Wethersfield Memorial Stadium with a wild 44-30 victory.

“We just had to come out strong and put up some points,” said A-W junior end Kale Nelson (six receptions, 51 yards, three TDs). “That's what we were trying to do, but shout out to Lena-Winslow. They're a great team.”

Following a 4-yard touchdown run by Reece Gripp midway through the third quarter, Quagliano and Nelson hooked up from 4-yards out for the second of Nelson's three TDs early in the fourth, closing the gap to 30-18 with nearly an entire quarter remaining.

However, Le-Win (13-0) got touchdown runs from Sean Ormiston and Iowa-bound Isaiah Bruce to nullify A-W's comeback bid, with Bruce's 53-yard scoring run coming with 4:20 left to play and making it 44-24 after Quagliano had hit Julian Samuels with a 9-yard TD pass 12 seconds earlier.

“They were coming back, and we couldn't lose any more momentum,” said Bruce, who rushed for 228 yards and three TDs on 16 carries. “I was just trying to pick up the team and do my best.”

A 31-of-50, 322-yard passing performance by Quagliano was not enough to send the Titans to the state championship game for the first time as they bow out at 12-1.

“It was definitely important for us to send out our seniors like we did. I can't describe how wonderful those guys are,” said Quagliano, referring to the quartet of Samuels (nine receptions for 105 yards), Isaac Shaw (five receptions, 44 yards) and defensive stalwarts Tevin Baker and Drake VanHyfte.

The way the game began, it looked as if A-W would have a strong chance at extending its season to Friday's 1A title game in DeKalb.

Taking the opening kickoff, the Titans marched 75 yards in 10 plays for the game's opening points, provided when Quagliano hit Nelson with a 4-yard touchdown pass on fourth down.

However, that seemed to wake up the second-seeded Panthers, as a 61-yard TD run by Bruce and Luke Benson's 24-yard scoring toss to Kade Chrisman, plus a pair of two-point conversions, had Le-Win up 16-6 after the opening period.

“Annawan-Wethersfield is a great team, but we had a great game plan going into this,” Bruce said. “When we come to away games, our mindset is that this is a business trip for us. We come to win.”

Bruce and Ormiston (92 yards on 16 carries) each found the end zone in the second period, widening their team's lead to 30-6 by halftime.

However, a strong defensive stand by A-W to open the third quarter, with Gripp's touchdown following on the hosts' ensuing possession, breathed new life into the Titans.

“The second half was a new start,” said junior end/linebacker Brady Kelley, who had six receptions for 88 yards, with Gripp adding 109 total yards. “We knew we had to come out and execute, do everything perfectly. That first score (of the second half), that brought everybody up. The team, the crowd, everybody.”

At one point during the second half, Quagliano hit on nine straight passes as the Titans worked relentlessly to cut into Le-Win's lead.

“He's a phenomenal football player,” said A-W coach Logan Willits. “The No. 1 ranked team in Illinois, and he didn't back down. He kept battling and competing.”

The whole team kept battling, with the third Quagliano-to-Nelson scoring connection making it a two-score game with 2:47 left to play.

Annawan-Wethersfield, though, did not have a rally for the ages for a shot at a state championship.

“There's no such thing as giving up with this team,” said Samuels. “Our coaches teach us to not give up. That's what's so special about this team.”

Trickle of high school transfers may become a tidal wave

High school football players transferring from one school to another has been a controversial topic for a few years.

KEWANEE — Up until the early afternoon hours this past Wednesday, members of the Annawan-Wethersfield football squad found themselves on pins and needles.

Just over a week ago, area prep football teams got a deserved piece of good news when they found out that there would be a season, albeit one delayed until the middle of February.

To put it mildly, the first summer of workouts with their respective football teams was not what Rockridge's Jeff Henry and West Carroll's Teo Clark expected.

As the Illinois High School Association prepares to make a decision today about high school athletics for the upcoming school year, Illinois Gov. J.B. Pritzker has expressed concern about the possibility.

Erie-Prophetstown back to practice after coach tests negative

ERIE — In addition to shuttering the 2020 spring sports season, the COVID-19 pandemic has altered the summer workout schedules for area prep football teams.

Annawan-Wethersfield's Logan Troxell (52) puts his hand over his face during the final minutes of Saturday's Class 1A state football semifinal against Lena-Winslow in Kewanee. The Titans' season ended with a 44-30 loss.

Annawan-Wethersfield junior quarterback Coltin Quagliano gets ready to fire a pass against Lena-Winslow during Saturday's Class 1A state football semifinal in Kewanee. Quagliano threw for 322 yards, but it wasn't enough as the Titans dropped a 44-30 decision.