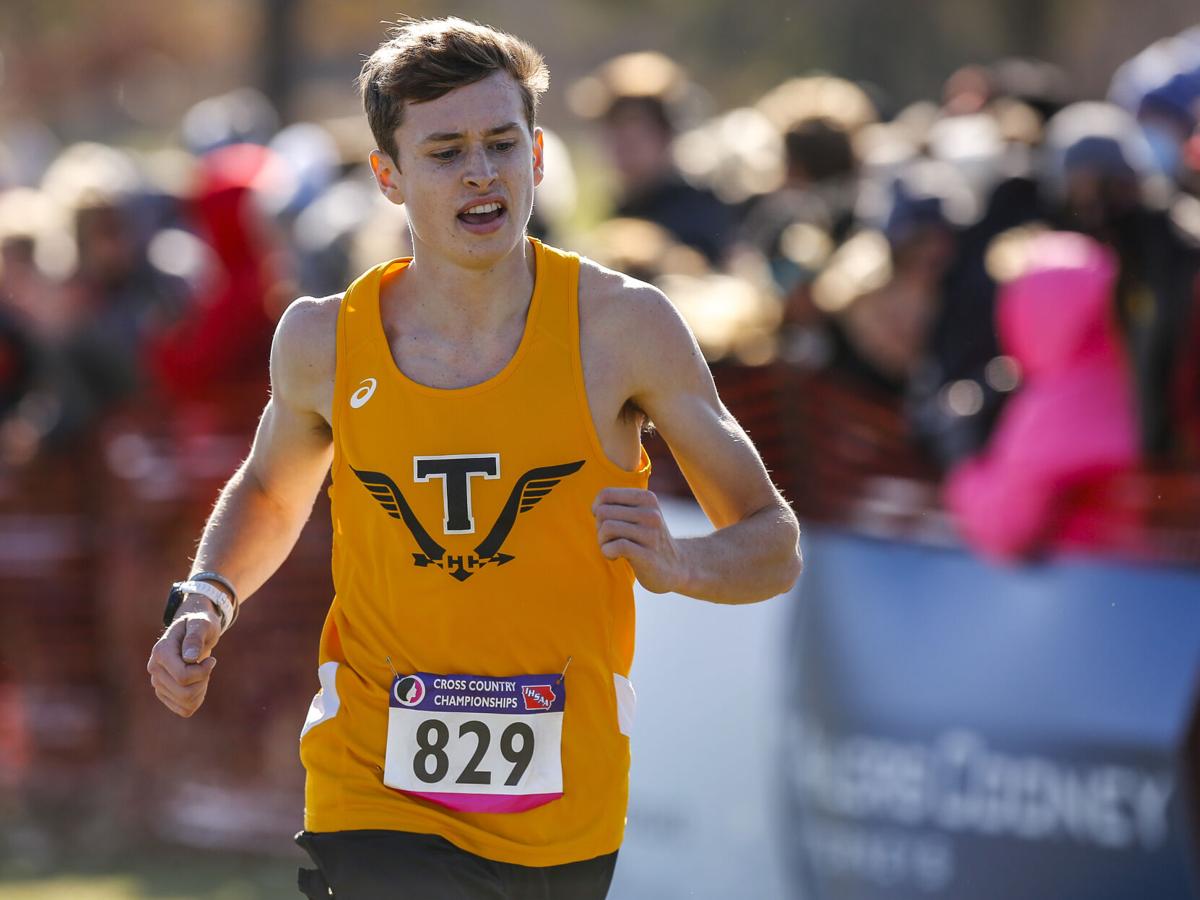 Tipton's Caleb Shumaker claimed an Iowa Class 2A state championship this fall in Fort Dodge. Shumaker, a University of Northern Iowa recruit, is the Quad-Cities All-Eastern Iowa boys runner of the year. 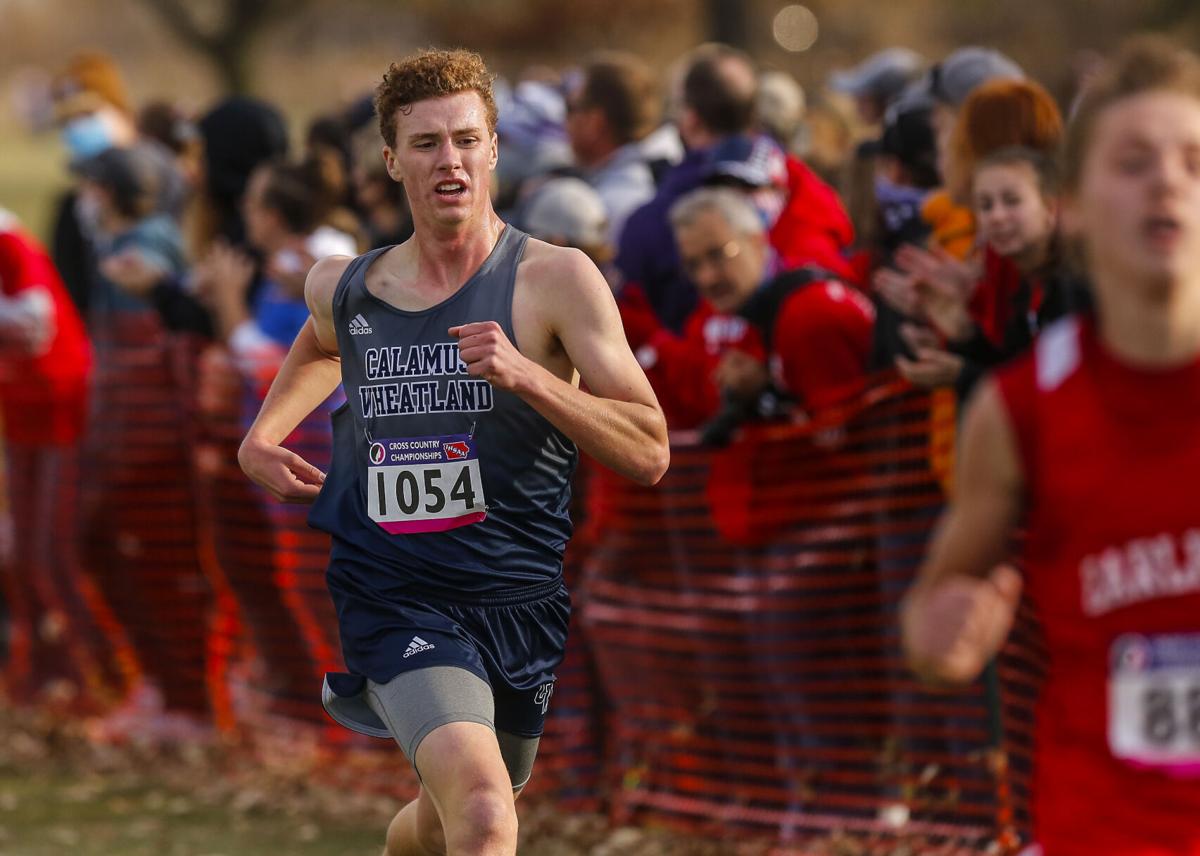 FORT DODGE — Caleb Shumaker had Saturday sharpied on his 2020 calendar.

The Tipton senior had come so close but yet so far in his last two trips to the state cross country meet, finishing fourth as a sophomore and third last year.

He had more in the gas tank than Sheldon’s Brendan Cain rounding the final turn and coasted to the finish line in 16 minutes, 13 seconds with a roaring crowd four-deep on both his left and right side at Lakeside Municipal Golf Course.

“I banged my head against this golf course many times last year, my mind was just running,” Shumaker said. “I just worked my butt off every day."

An offseason of increasing mileage, running twice a day including at 5:30 in the morning, helped Shumaker become the cream of the crop in 2A.

“Last year I may have peaked around 40 (miles); this year I was hitting 60 after 60 after 60,” Shumaker said. “Just half-marathons on the weekends, and when the second mile came today, I knew I had more leg turnover than the guy next to me.”

The joy of winning the individual race quickly subsided when he took one glance at the board near the finish line, where final results of the boys race were scrolling up.

That feeling of disappointment overtaking the elation of when he hit the finish line is an element that Eric Walsh loves about his lone senior in the lineup.

“Caleb is one of the hardest working guys I’ve ever had the privilege of working with,” the Tigers coach said. “He does extra mileage, he’ll do extra core. It’s what you can do to inspire everyone else.”

Tipton was going for its third straight team title, but the Bears ended those hopes by having the runner-up and third-place finisher along with two others inside the top 25.

“I gotta hand it to Danville, they handily beat us,” Walsh said. “They peaked at the right time. Danville deserved it today.”

Nichols, a sophomore, and Bohlmann, a junior, were right next to each other throughout the 5,000-meter course. By the time Butler crossed the finish line, Danville/New London’s top four were already catching their breath.

Shumaker and Cain were stride for stride through the 2½ mile mark. The former was ahead of the latter at 1-mile and 2-miles in. With windy conditions, Cain drafted behind Shumaker for most of the afternoon.

It wasn’t until the home stretch that Shumaker built his commanding lead while Cain, who crossed the finish line in 18th, struggled to maintain balance and fell at multiple points.

“I looked at my shadows, and he started fading away,” Shumaker said. “It was all heart from there.”

Camanche’s Dylan Darsidan, last year’s state champion, medaled for the third time in his career with an 11th-place finish in 17:21.

The Indians senior never could return to peak form in 2020. He felt like if he were to push for gold again, he’d have to perform like he did a season ago.

“I had a stronger finish, but I would’ve liked to have a stronger second mile. I wasn’t able to make up much ground,” Darsidan said. “I won’t keep my head down, use it as motivation. I’ll try and figure out what’s wrong. I’ll be back.”

Camanche sophomore Andrew Butt placed 80th with a time of 18:39. Darsidan sees a bright future for his teammate.

“I have so much hope for him,” he said. “He learned a lot from me. That’s what I wanted to do all year long.”

In Class 1A, Calamus-Wheatland senior Chase Knoche used a consistent race to slide into seventh in 16:45. Wind played a factor in his race strategy, with Knoche staying in the top 10 at each of the mile markers and being part of a pack of three chasing for fifth with half a mile to go.

“It’s a little bit emotional,” Knoche said. “I guess I would’ve made contact with that lead group just a little bit sooner. I think I waited too long. I just thought I would conserve a tad bit more at the beginning.”

Teammate Magnus Sands finished 25th. Clinton Prince of Peace sophomore Marcus Blount hovered around the top 15 for the entire race until the end where he was passed by three runners down the stretch to finish 19th in 17:17.

“I think I started off pretty fast, got tired at the 2-mile mark,” Blount said. “I think I could’ve tried to push knowing where I was at.”

United Township's Maddie Miller and Riverdale's Tommy Murray won their respective races at the Moline Invitational during a downpour that flooded much of the course.

Tipton's Caleb Shumaker claimed an Iowa Class 2A state championship this fall in Fort Dodge. Shumaker, a University of Northern Iowa recruit, is the Quad-Cities All-Eastern Iowa boys runner of the year.