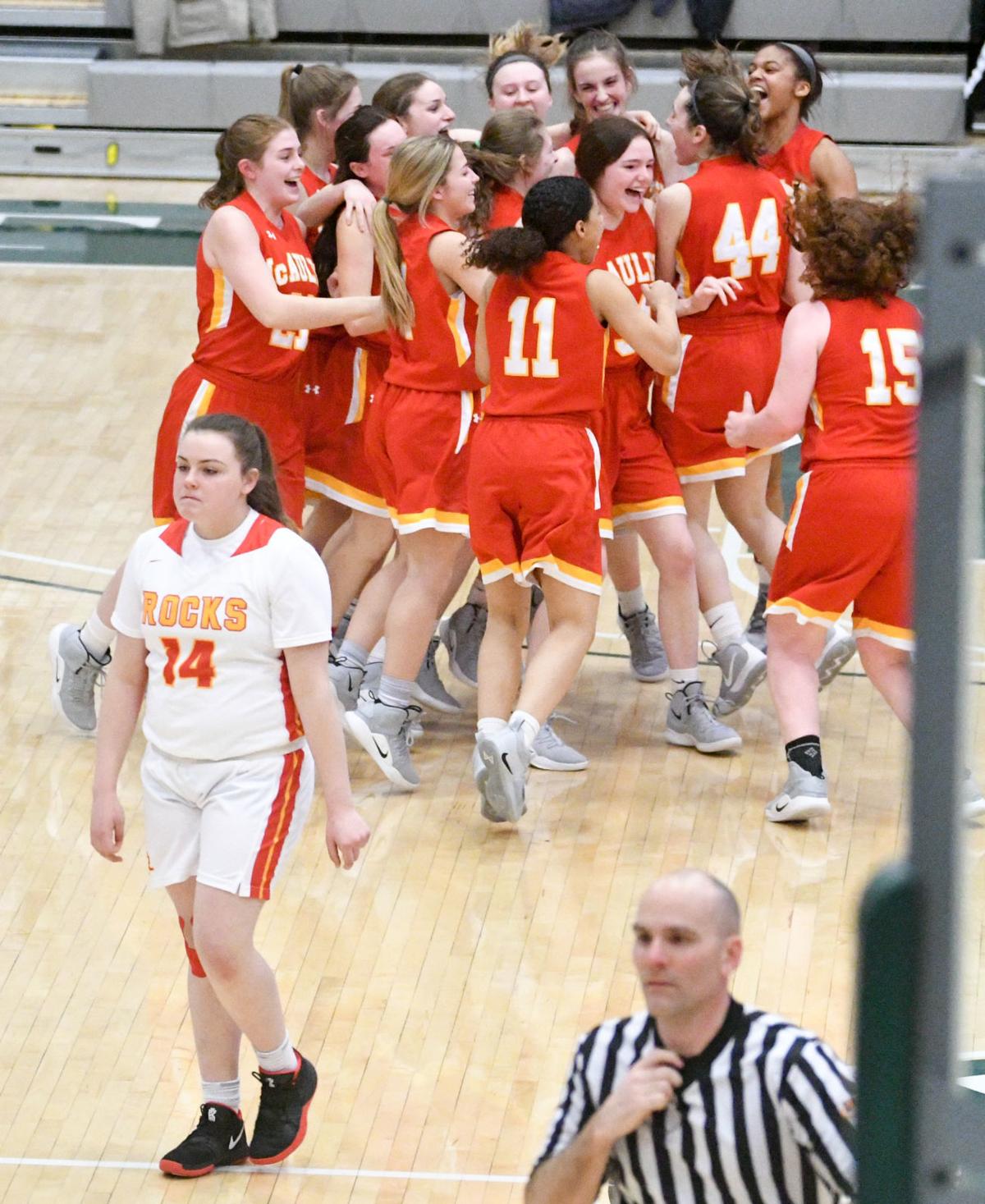 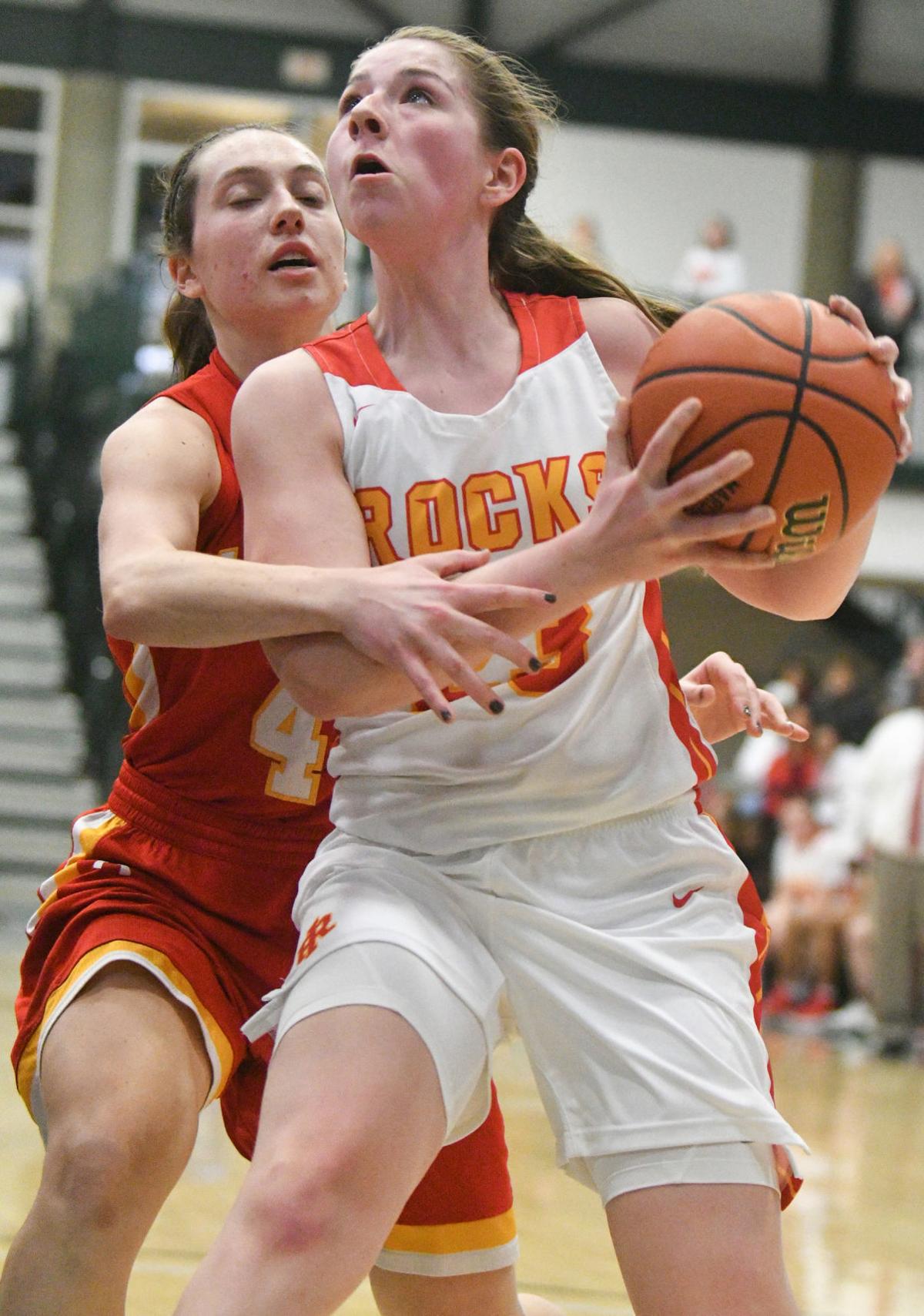 Rock Island's Hannah Simmer (23) drives to the basket against Chicago Mother McAuley during the Class 4A Super-Sectional Monday at Illinois Wesleyan's Shirk Center in Bloomington. 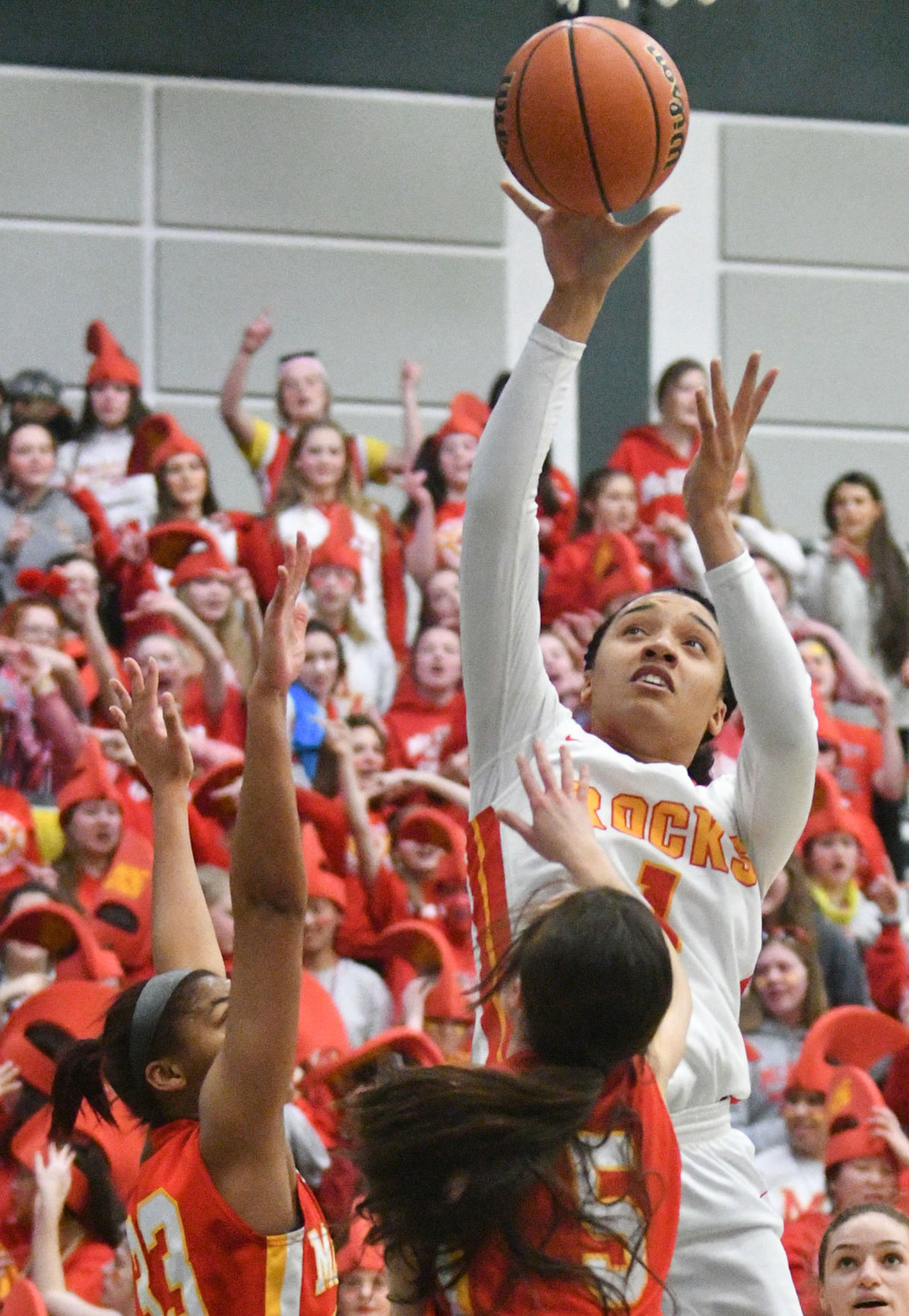 Rock Island's Brea Beal (1) goes up for a shot against Chicago Mother McAuley's Nikki Murphy (5) during the Class 4A Super-Sectional Monday at Illinois Wesleyan's Shirk Center in Bloomington.

BLOOMINGTON — Size certainly does not matter. If you want an example, look no farther than the Chicago Mother McAuley Mighty Macs girls' basketball team.

Without a player taller than 5-foot-11 freshman reserve Bella Finnegan and playing with five guards, the Macs were all over the Rock Island Rocks on defense and dead-eyes from beyond the 3-point arc to end the Rocks' historic season, 66-48 in the Class 4A Illinois Wesleyan Super-Sectional at the Shirk Center.

Mother McCauley (33-2), ranked 10th statewide, was all over the second-rated Rocks on defense for 32 minutes. The Macs also made 10 of 20 3-point shots to get a lead midway late in the first quarter and never let it go to top the Rocks (30-2).

"We could never get in a flow," RI coach Henry Hall said. "There was never a rhythm for us on offense. We never stopped competing, but every time we would get it to four or five, they would hit a 3 and get a steal."

The Rocks led 12-7 with a couple minutes left in the first quarter, but Mother McAuley finished the quarter on a 7-0 run to take a 14-12 lead.

From there, the Macs used the 3-ball from Jenna Badali (34 points, including 5-of-8 triples) and Grace Hynes (20 points and seven rebounds, including 4-of-4 from beyond the arc). The biggest may have come at the buzzer to end the half when Badali buried a 3 from the corner to put the Macs up 33-24 at the half.

The Rocks players were also a little surprised by the lack of rhythm they had in their second loss of the season.

"I told the team on the bench when I came out (in the closing seconds) that we can't be mad at nobody but ourselves," senior Brea Beal said. "I think we may have overlooked them. We emphasized that they like to shoot and we didn't do a good job of getting out on them."

Added fellow senior Carlee Camlin, "You have to give credit to Mother McAuley, they came out and played hard from the start. I think we went into this thinking we were the team who plays hard, but that team played harder than us."

The Rocks came out in the third quarter and Beal took over with six points to get them back within four but the Macs went on another run to take the lead back to eight after three quarters.

"I could see a few heads down and no one was stepping up to make plays," Beal said. "I tried to keep getting others involved, but some days the shots don't go for everyone. I tried to get more aggressive."

The Rocks could never get get that big basket and a stop in the fourth quarter as the teams went back-and-forth for baskets before RI finally had to start fouling.

That did not work well. The Macs made all of their 18 free-throw attempts, including 10-of-10 for Baldali in the final quarter.

"It was frustrating," Camlin said. "We never gave up, but they were so on fire and we just couldn't get it done."

Hall felt like the inability to get stops was a key point.

"We would get it close to where we could make them nervous and we couldn't get a stop," he said. "That's when I knew we were off kilter. We were getting beat off the dribble, not getting our hands in lanes and leaving too many of their shooters.

"They had a gameplan to spread us out so they could get shots. They made them (Monday). They didn't make them last Thursday and scored 26 points."

Hall is thinking about asking the State Farm Holiday Classic to move next year's title game out of the Shirk Center. The only other RI loss was here in that tourney's title game to nationally-ranked Union Ryle of Kentucky.

"Well, at least if we get this far next year we will be in Class 3A and won't have to play here in the super-sectional," Hall said. "Our only two bad games all year came in this building. You know what, people may think we won't be as good next year, but we will be back."

Rock Island's Hannah Simmer (23) drives to the basket against Chicago Mother McAuley during the Class 4A Super-Sectional Monday at Illinois Wesleyan's Shirk Center in Bloomington.

Rock Island's Brea Beal (1) goes up for a shot against Chicago Mother McAuley's Nikki Murphy (5) during the Class 4A Super-Sectional Monday at Illinois Wesleyan's Shirk Center in Bloomington.