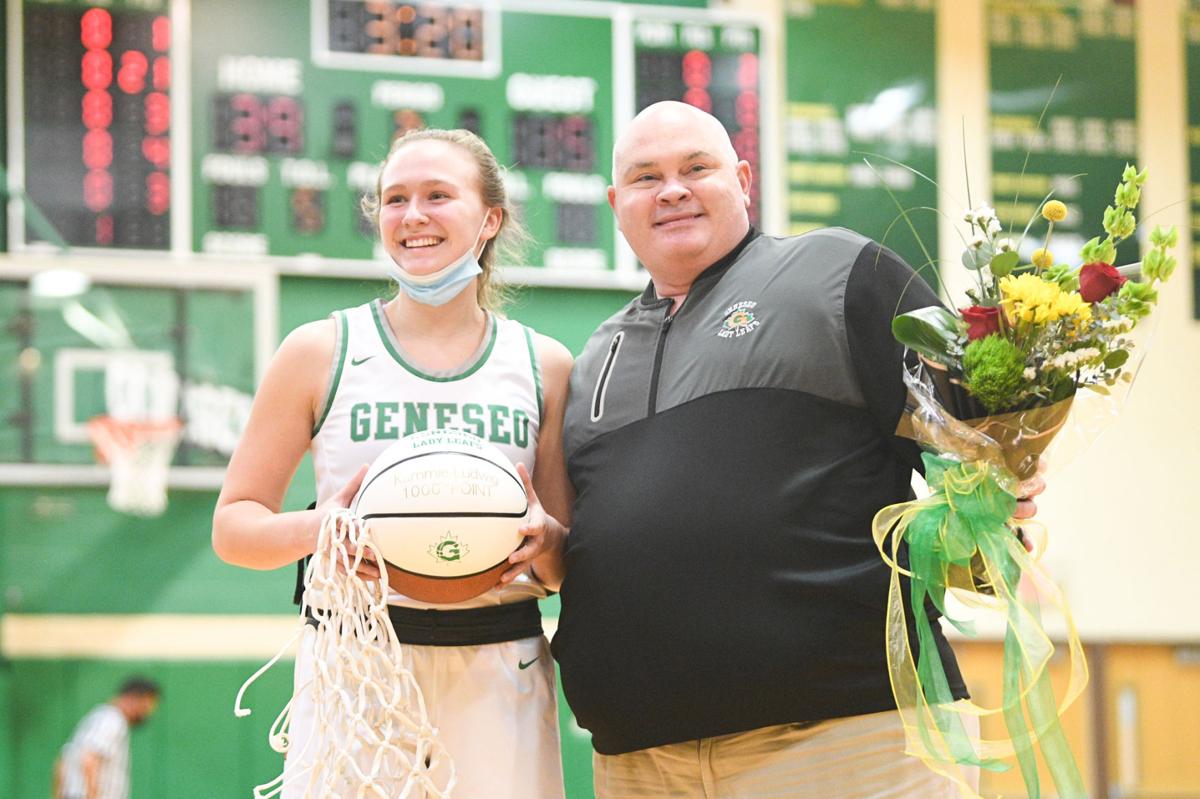 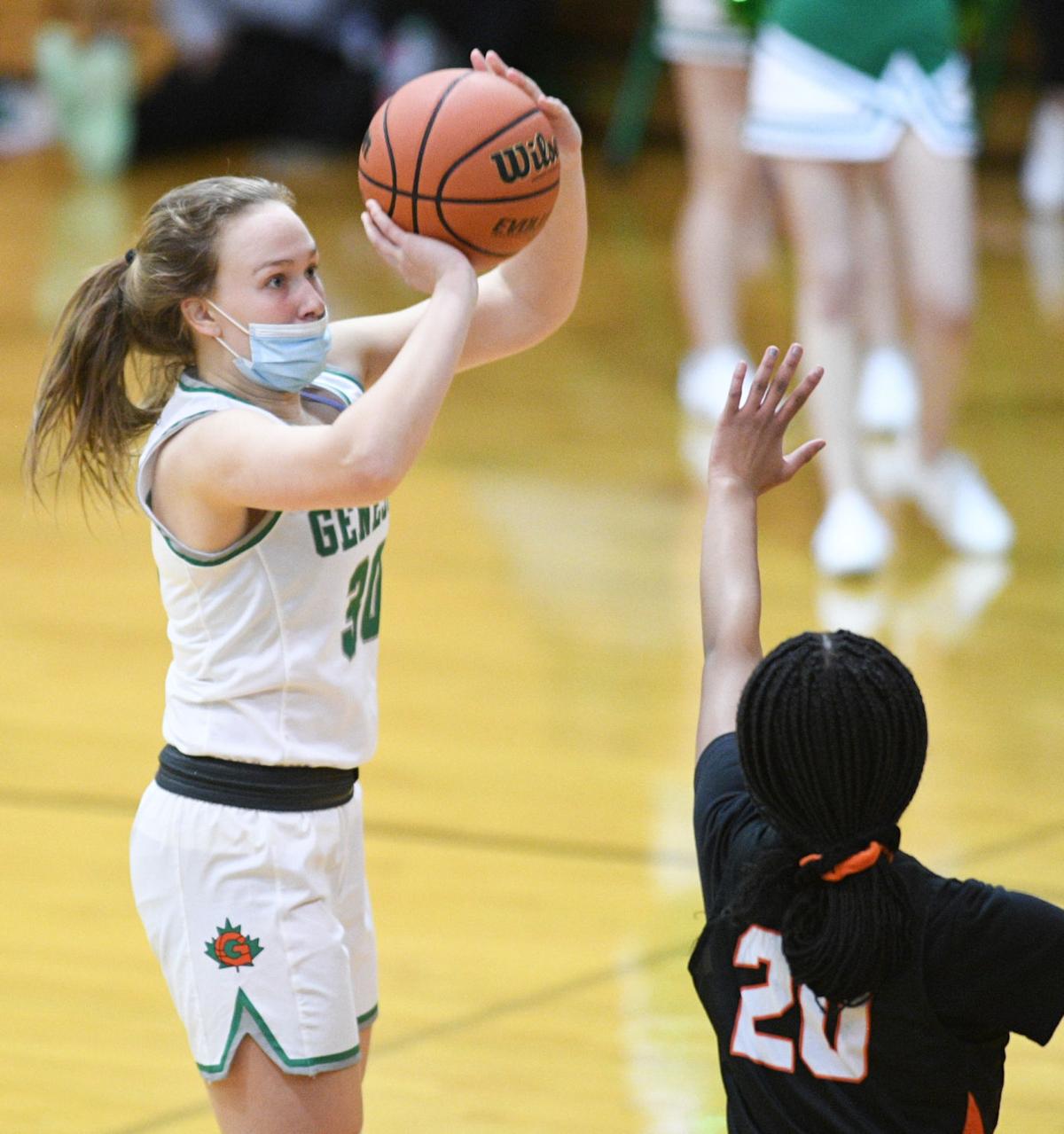 Geneseo's Kammie Ludwig averaged 21.2 points per game and helped lead the Maple Leafs to an unofficial Western Big 6 Conference title this winter. Ludwig has pledged to join the women's basketball program at Providence in 2022.

Kammie Ludwig had plenty of Division I mid-major women’s basketball programs targeting her in the past 12 to 15 months.

But when Providence College, a member of the Big East Conference, reached out, it immediately piqued her interest.

After several weeks of conversation with the Providence coaching staff and a recent visit to campus, Ludwig verbally committed to the Catholic university in Rhode Island on April 21.

“This is something I’ve worked for my whole life,” said Ludwig, who made her decision public last week. “I started playing basketball in third grade. I’ve gotten attention from mid-majors and that has been an awesome experience, but I wasn’t really expecting this one.

“It means a lot. When they contacted me, it almost hit me at the moment my work is paying off.”

A first team all-Western Big 6 selection and two-time Illinois Quad Cities metro player of the year, Ludwig averaged 21.2 points per game, helped Geneseo win an unofficial league title and surpassed 1,000 career points this past winter in a shortened junior season because of COVID-19.

Geneseo coach Scott Hardison said Ludwig will be the first girl during his decade-long tenure to play at a power six program for basketball. He believes she is the first to do so in Geneseo history.

“Kammie is a player that is a little bit undiscovered right now with the top Division I groupings,” Hardison said. “She is playing for All-Iowa Attack this spring and I think she is going to get a ton of exposure."

Ludwig admitted she had never heard of Providence until the recruiting process. The school is about 1,100 miles from Geneseo, but the Friars aren't unfamiliar with the Midwest as they have multiple players from Illinois on their roster.

“When they called me, I asked them, ‘How in the heck did you find me?’” Ludwig said. “They saw our Geneseo team play and asked coach Hardison what’s going on there and what helped us to win games.”

In particular, Providence was drawn to Ludwig's 31-point performance in a win against Sterling when Geneseo was without multiple starters.

“Providence got in early, did its homework and watched several of our games that were streamed online," Hardison said. "They’re getting a kid that works her tail off, a great leader for our program and the full package.”

Once Ludwig stepped foot on campus, her decision was solidified.

“I didn’t want to stay close to home,” Ludwig said, “and I really developed a good relationship with the coaches there.

“Before I played an (AAU tournament) in Virginia, we left beforehand to take a tour. I didn’t think I’d commit by the end of it, but once I stepped on campus, I got that feeling people say, ‘When you know, you know.’ I got that feeling in my heart that is where I belong. It had everything I wished for.”

Providence hasn’t had much success recently, finishing above .500 just once in the last 11 seasons. It was 7-14 this past year.

The Friars plan to have the 5-foot-10 Ludwig play the wing. According to Ludwig, coach Jim Crowley’s squad has six freshmen joining the program this summer.

Ludwig can sign a national letter of intent in November and join Providence in the summer of 2022.

“Coach Crowley is building the program up,” Ludwig said. “It is a fresh team coming in.”

Even though it is a considerable distance from home, multiple schools in the Big East are located within a five-hour drive of the Quad-Cities — Butler, Creighton, DePaul and Marquette.

“It is a little heart-wrenching because my parents and I are close,” Ludwig said. “It is a little tough on my mom, but it is a good feeling that they can still be at a lot of my games.”

Ludwig admitted the decision is a big weight off her shoulders.

She’ll travel around the country this spring and summer playing for the All-Iowa Attack, an AAU program based out of Ames which has produced Iowa’s Caitlin Clark and Iowa State’s Ashley Joens.

“When I committed, I couldn’t stop smiling,” Ludwig said. “It gets stressful during the recruiting process because you’re on the phone with colleges a lot. So after you make a decision, you can let go a bit.

“I’m a lot looser when I play on the court and more relaxed."

Moline's high school girls basketball coach resigned from her coaching position and was issued a notice of remedial warning Monday night during a special session of the school board.

Chad Specht has resigned as girls basketball coach at Central DeWitt following a trip to the state tournament last winter.

Geneseo's Kammie Ludwig averaged 21.2 points per game and helped lead the Maple Leafs to an unofficial Western Big 6 Conference title this winter. Ludwig has pledged to join the women's basketball program at Providence in 2022.