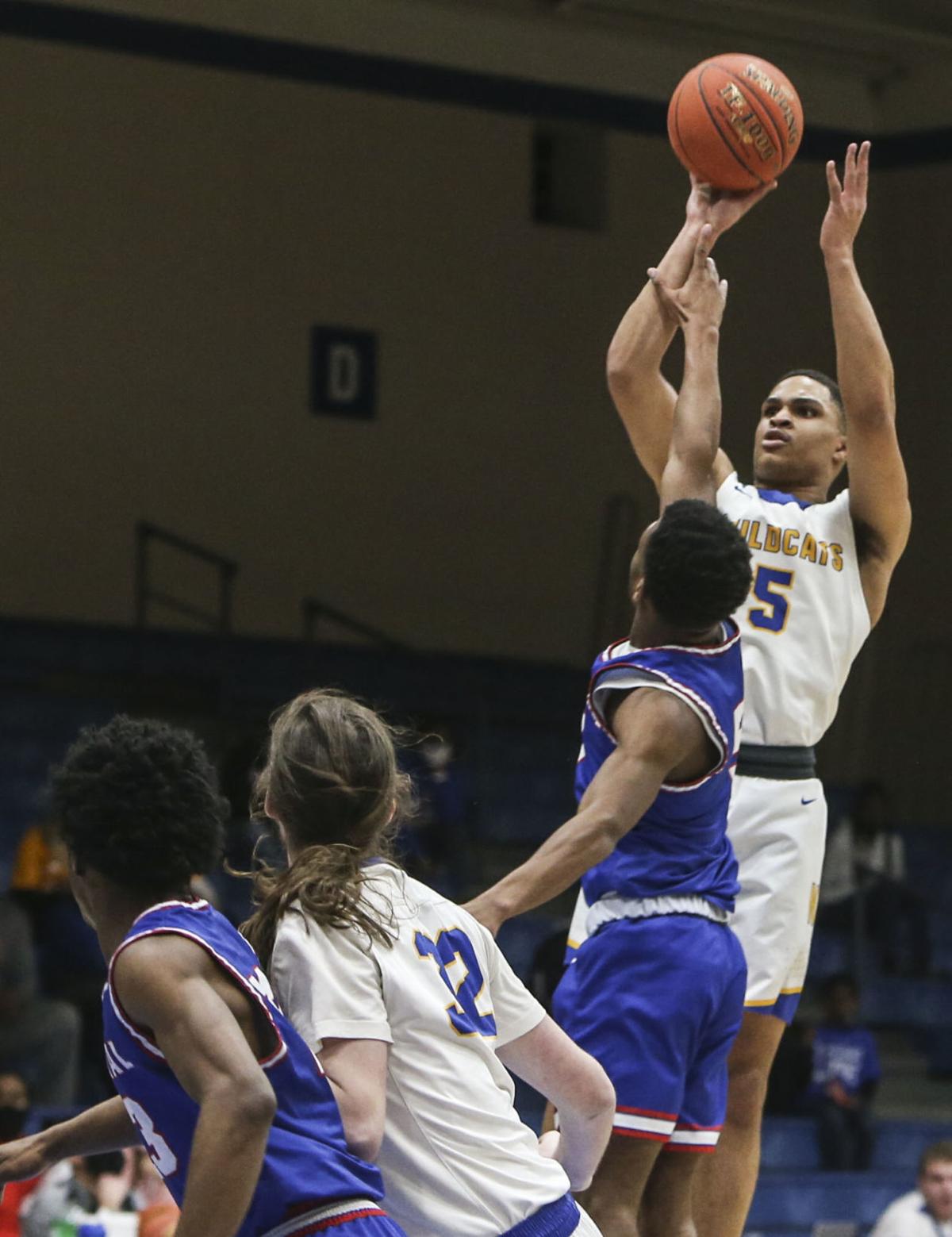 Davenport North's Jayden Houston shoots a jump shot over a Davenport Central defender Monday night. Houston had 20 points and eight rebounds for the Wildcats in their Class 4A substate victory. 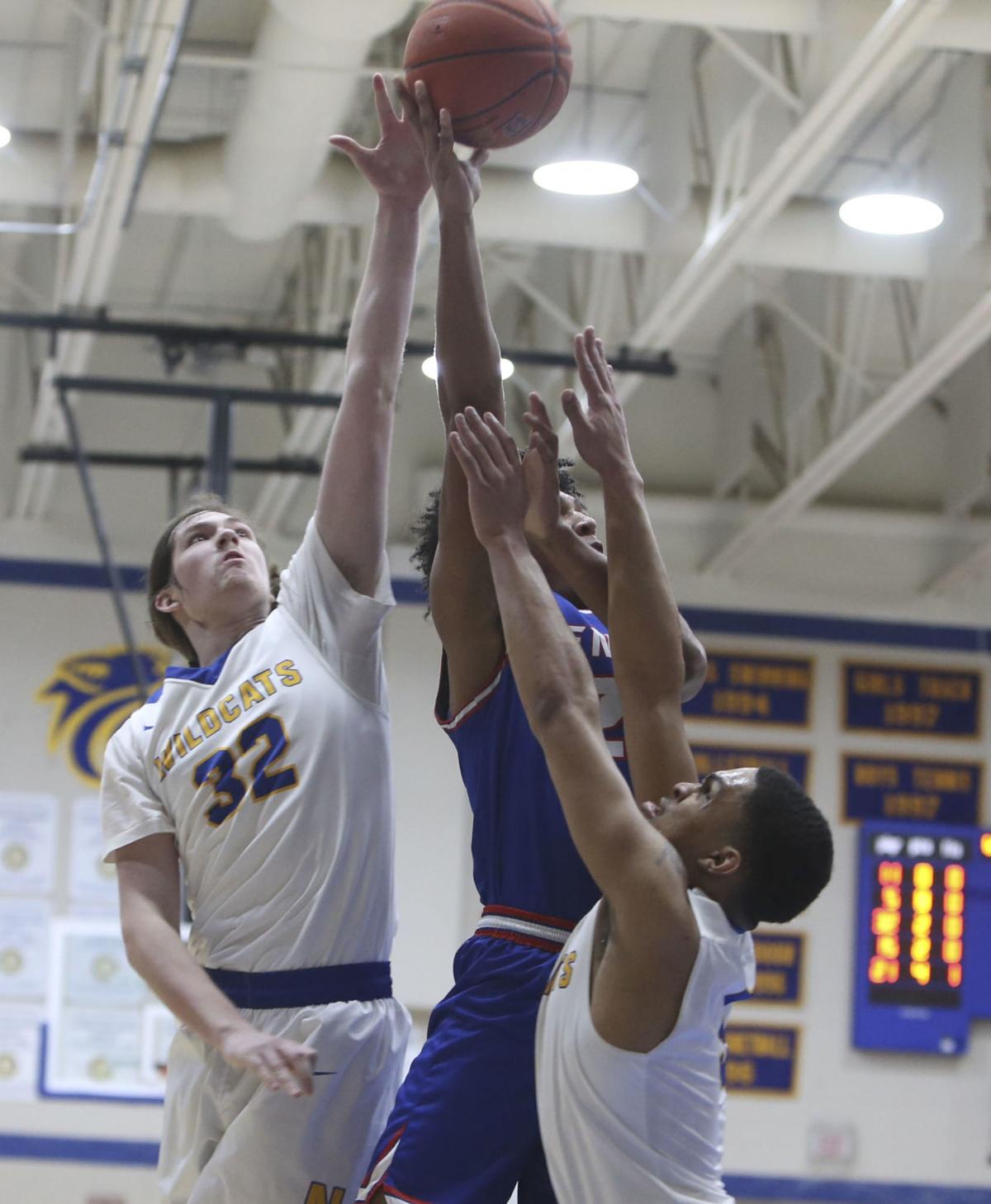 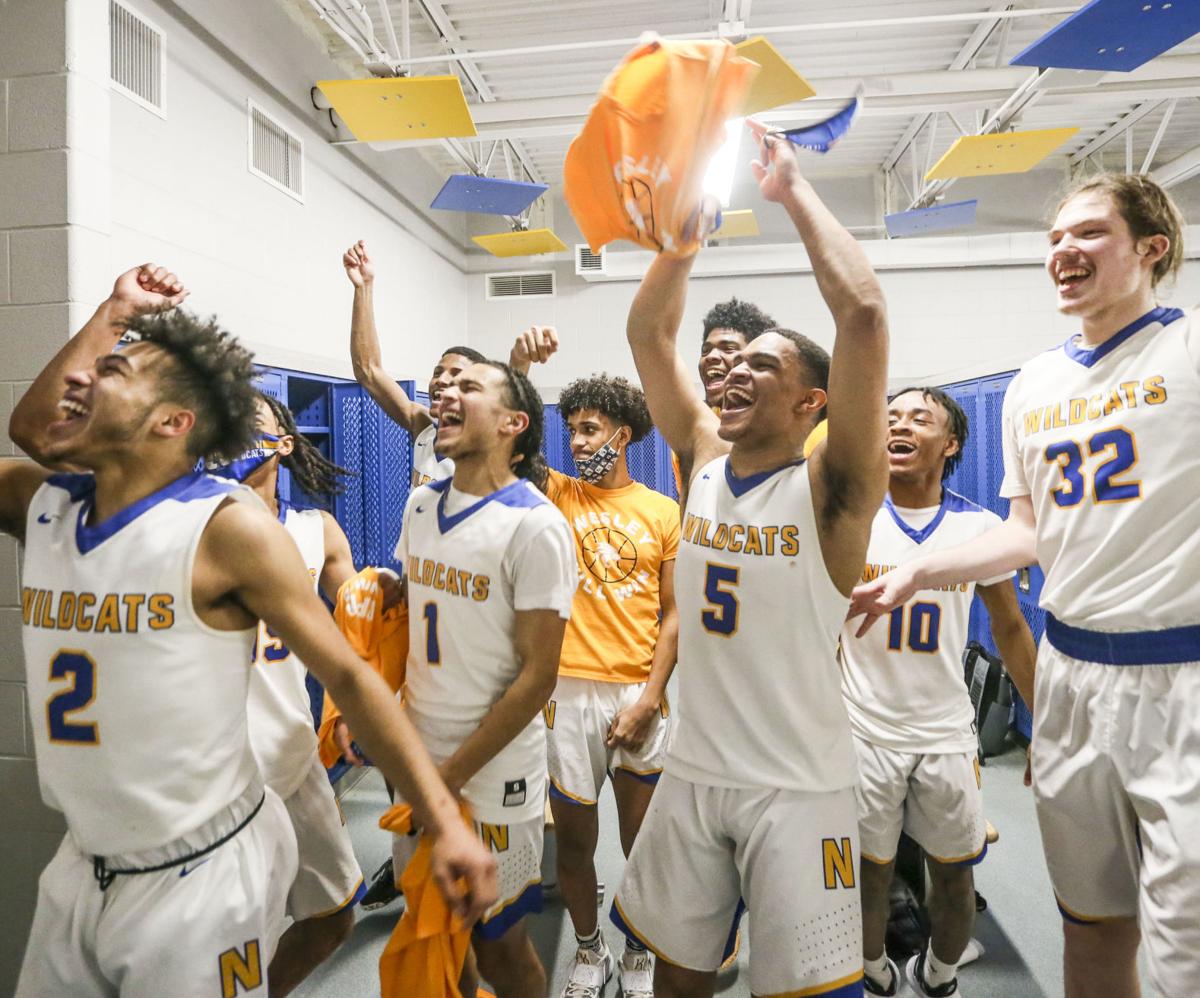 Davenport North celebrates in the locker room following a 62-43 win over Davenport Central on Monday night. The Wildcats advanced to a substate semifinal Friday against Iowa City Liberty.

About a year ago at this time, the Davenport North boys’ basketball team found its footing under first-year coach Marc Polite and parlayed it into a trip to the state tournament.

After a shaky start to this season, one in which it had limited offseason work because of the COVID-19 pandemic, was paused until mid-December and lost three of its first five games, North seems to be figuring things out again at an opportune time.

Behind four players in double-figure scoring and a defense that forced 18 turnovers, North opened Class 4A substate play Monday night with a convincing 62-43 win over Davenport Central at North High School.

“We’re in a similar boat to last year,” Polite admitted.

“I knew it was going to take us some time. We’ve got some new faces that are playing quality minutes for us and we lost some close games in January, but I think we’re starting to figure it out. We’re developing that chemistry it takes to be a good team.”

North (13-5) advances to play Iowa City Liberty (6-5) in a substate semifinal Friday night in North Liberty. Liberty started the year 5-1, but has lost four of its last five.

North, meanwhile, has reeled off seven straight victories. Other than a six-point triumph over state-ranked Davenport Assumption, the remaining six wins have been by 11 points or more.

“We moved the ball better tonight,” North senior Jayden Houston said after scoring a game-high 20 points and grabbing eight rebounds. “We weren’t playing together as a team as much a month ago.

“Ever since coach came on, our main thing is defense. When we sit and guard, there aren’t a lot of teams that can beat us. We're defending well right now."

The Wildcats turned the Blue Devils’ mistakes into offense.

Houston had 15 of his points in the opening half as North raced to a 32-21 halftime advantage. Mehki Jacobs chipped in 13 points and Quincy Wiseman had nine of his 11 points in the second half. Freshman KJ Lamonte came off the bench to tally 10.

Jacobs hit a 3 to start the third quarter and Central never was able to get the deficit under double figures.

When North made the state tournament a year ago, it went on the road to beat Cedar Rapids Prairie in the semifinal round and then clipped state-ranked Dubuque Senior in the substate final.

The Wildcats would have to follow a similar pattern this year with a road game at Liberty. Should North win that, state-ranked Pleasant Valley or Bettendorf would loom in the substate final.

“This is a game group,” Polite said. “We’re starting to raise our level, in practices and games. Hopefully, we can keep it going.”

Central, after starting the season with seven consecutive losses, closed the year with five wins in its last nine games.

“I was proud of this group in the way they grew this year with all the adversity we’ve been through, no experience back and won five of (eight). I was happy with their behavior, character and attitudes, a very coachable group.”

Defensive energy keys Moline to win over No. 6 Galesburg

QUINCY — Amid all the changes taking place because of the COVID-19 protocols, Rock Island boys basketball coach Thom Sigel finds his team facing something challenging at every turn.

As the Davenport North boys and girls basketball teams have taken the court for pregame warmups in the past several weeks, they have done so wearing orange T-shirts.

Traditionally, when one thinks of the day-night doubleheader they tend to associate it more with baseball than basketball.

Finishing up the first half of a tight Western Big 6 boys' basketball conference race, Friday night's rivalry renewal between Moline and United Township had plenty going for it.

GENESEO — In their second match-up of the pandemic shortened season, the Geneseo Maple Leafs on Saturday combined clutch late-game shooting with tough interior defense to complete the season sweep of Quincy.

NORTH LIBERTY — At one point early in the fourth quarter Friday night, Ethan O’Donnell was 0 for 10 from the field.

ELDRIDGE — Throw out the style points. When it comes to the postseason, it is all about survival.

Davenport North's Jayden Houston shoots a jump shot over a Davenport Central defender Monday night. Houston had 20 points and eight rebounds for the Wildcats in their Class 4A substate victory.

Davenport North celebrates in the locker room following a 62-43 win over Davenport Central on Monday night. The Wildcats advanced to a substate semifinal Friday against Iowa City Liberty.