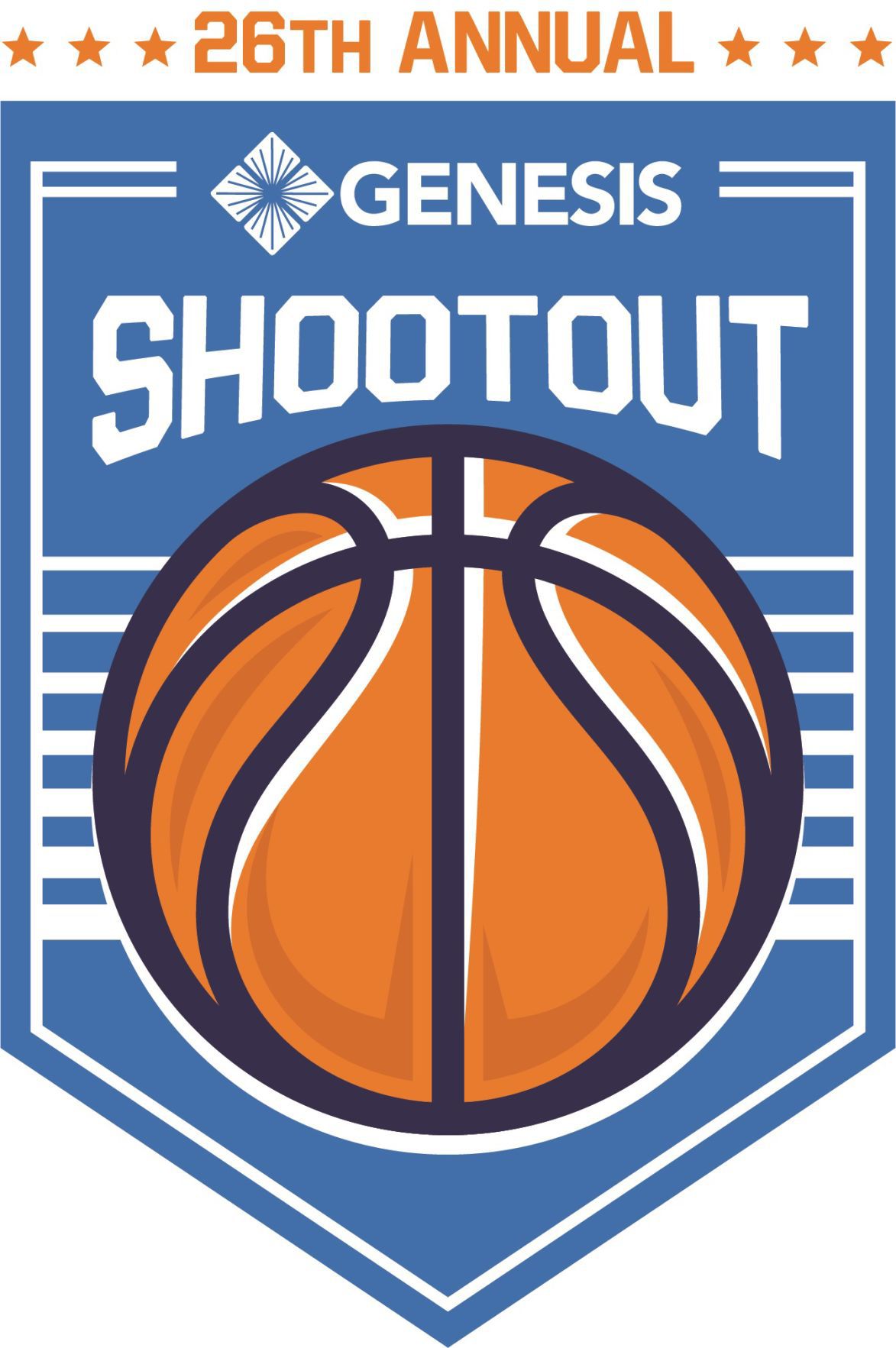 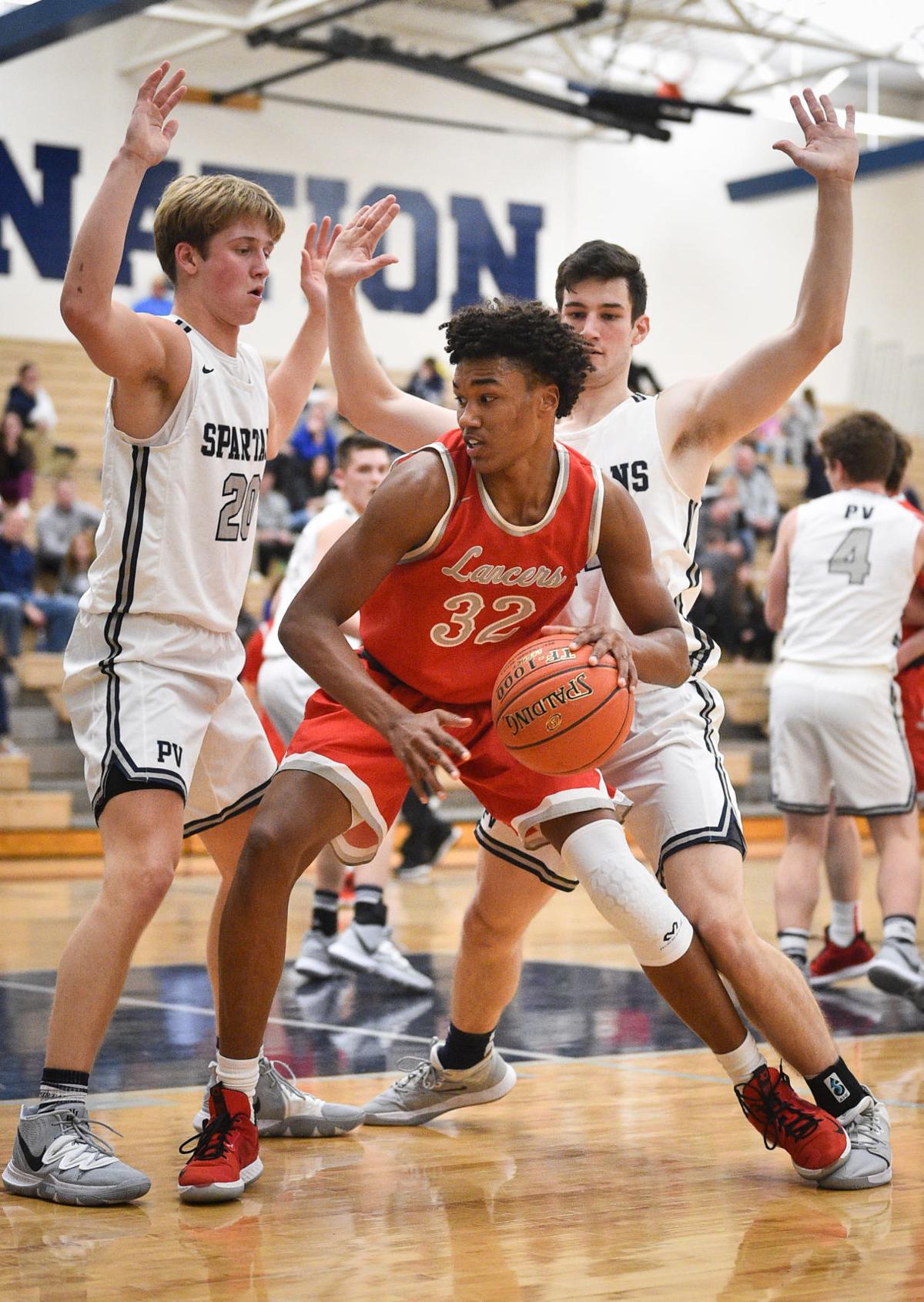 North Scott's Tytan Anderson (32) drives to the basket against Pleasant Valley's Jacob Townsend (20) during a MAC gamer earlier this month in Bettendorf. Both teams are playing today in the Genesis Shootout at Augustana's Carver Center. 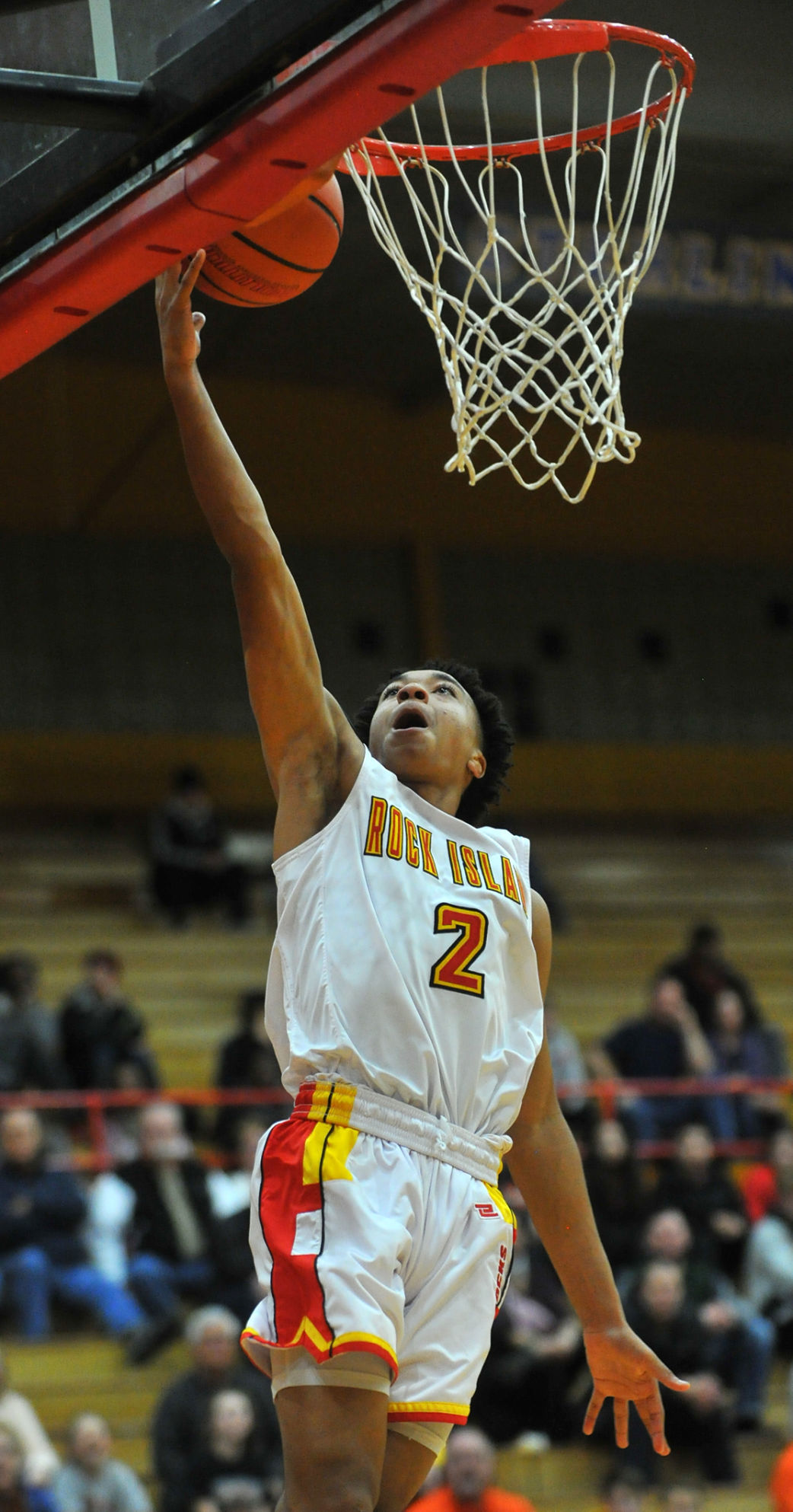 Rock Island's Jordan Rice makes an easy, uncontested breakaway layup during the first half of a Western Big 6 Conference game at Rock Island. Both teams are playing today in the Genesis Shootout at Augustana's Carver Center.

The Genesis Shootout is today at Augustana College's Carver Center. Admission is $5 for all seven games. Here is a look at the matchups:

Need to know: This will be just the third game of the season for West, which received 23 points from Jamal Winston in its season opener. Alleman is playing its ninth contest. West is 0-4 against Alleman all-time in the Shootout. The Pioneers have just two players on their roster who have played in this event.

David Robinson, Dav. West: "We are starting two sophomores and they are the ones who will be handling the ball, so that's a real worry. This is also just our third game of the season."

Kyle Murray, Alleman: "We have only two players who have ever played in this event and we're going through some growing pains."

Need to know: North has won five consecutive games at the Shootout, including a 25-point win over Riverdale three years ago. Coach Marc Polite's team, off to a 1-3 start, is led in scoring by Jayden Houston at 17.3 points per game. Riverdale (3-5) is coming in off a 60-55 loss to Mercer County.

Marc Polite, Dav. North: "We are so far behind. I was hired so late and the first time I met some of our guys was the first practice. We are going to be all about effort and intensity."

Alex Kelley, Riverdale: "I always enjoyed playing in this event and I hope our guys feel the same way. We are excited to play one of the most athletic teams we will see all season."

Need to know: The first meeting in five years between the two at the Shootout, PV starts two juniors and a sophomore point guard. PV was held to 21 points in a loss to North Scott on Tuesday. UTHS scored only 18 in a defeat to Rock Island. PV is 8-1 all-time in this event while UTHS is 15-10.

Steve Hillman, PV: "“PV has definitely enjoyed the opportunity to compete in the Shootout over the past decade. We have played against many great players and teams over the years. We are excited with the opportunity to compete against Coach Webber and UT in this year's Shootout. We have a ton of respect for their program and it will be a challenge to attempt to attack their 3-2 zone."

Ryan Webber, UTHS: "We have nothing but respect for PV and the program they have built. I hope we can replicate their stingy defense."

Assumption coach Matt Fitzpatrick: "We start with Sean Peters and hope to surround him with the right pieces. We have a ton of respect for coach Taylor."

Sean Taylor, Moline: "This is a great opportunity this week to get to play Geneseo (on Tuesday) and one of great players in Isaiah Rivera, Rock Island (Friday) and a great Assumption team."

Need to know: Offense has been a challenge thus far for the Bulldogs, who averaged 39.7 points per game in their first three games. Galesburg scored 92 points in Tuesday's win over Sterling, a game in which Jaylin McCants erupted for a career-high 41 points. Eric Price also is a double-digit scorer for Galesburg.

Curtis Clark, Bettendorf: "After losing DJ (Carton) and three other great guards, we are starting over. We also have some guys coming back from football who are banged up and behind."

Ryan Hart, Galesburg: "We are off to a good start and we have two guys who are playing well in Jaylin McCants and Eric Price."

Need to know: This is the first meeting between the schools since 2010. Emarion Ellis and Kaiden Phillips each had double-doubles in Central's win over North on Tuesday. The Blue Devils have won four straight at the Shootout. Colorado State recruit Isaiah Rivera leads a 7-1 Geneseo squad.

Craig Wurdinger, Dav. Central: "We have four starters back and are looking for some depth. I know we are facing a really good player and they are very disciplined. It will be a battle of styles."

Brad Storm, Geneseo: "Central has length, size and speed. I think it will be a good matchup. The last time we played each other was 2007 and that game went three overtimes."

Shamus Budde, North Scott: "Our kids put a lot of time into basketball during the offseason and I know they talk a lot about trying to get into the final game at the Shootout. I know our kids are really, really excited about it. Rocky is the best team we've seen on film, by far. They have a complete team."

Thom Sigel, Rock Island: "We've had some good battles in the past. Their kids know how to win and we just hope we will be ready for the Lancers."

In a matchup of two state-ranked basketball teams in Class 3A, Galesburg often looked like it could score at will against the Rock Island Rocks in their Western Big 6 Conference battle at Rock Island Fieldhouse on Friday night.

ALEDO — A “sluggish” defensive effort in the first half put the Rockridge boys basketball team behind early, but the Rockets locked down after the break against Alleman on Tuesday night as Nate Henry scored a game-high 31 points to open postseason play.

ALEDO — A team that averaged just more than 42 points per game, the Alleman Pioneers figured things out at the right time.

In 19 seasons as coach of the Rock Island boys basketball team, Thom Sigel's teams have finished above .500 in 18 of those seasons, tallied 20 or more wins seven times and won nine Western Big 6 Conference titles and 10 regional championships.

Geneseo gets back on track, beats Quincy

GENESEO — The Geneseo Maple Leafs  boys' basketball team needed something good to happen. They got it.

EDGINGTON — Since suffering an eight-point loss at Fulton on Feb. 4, the Rockridge boys' basketball squad has bounced back and set itself up to finish as a conference champion.

Boys basketball title on the line in regular-season finales

Tonight wraps up the regular season for area boys' basketball teams, and for several squads, it is also the opportunity to put the wraps on co…

Defense has been the one constant this season for the United Township boys basketball team, keeping the Panthers in close games. When the offense appears on the hardwood, it has led to some impressive wins in an otherwise up and down season.

North Scott's Tytan Anderson (32) drives to the basket against Pleasant Valley's Jacob Townsend (20) during a MAC gamer earlier this month in Bettendorf. Both teams are playing today in the Genesis Shootout at Augustana's Carver Center.

Rock Island's Jordan Rice makes an easy, uncontested breakaway layup during the first half of a Western Big 6 Conference game at Rock Island. Both teams are playing today in the Genesis Shootout at Augustana's Carver Center.