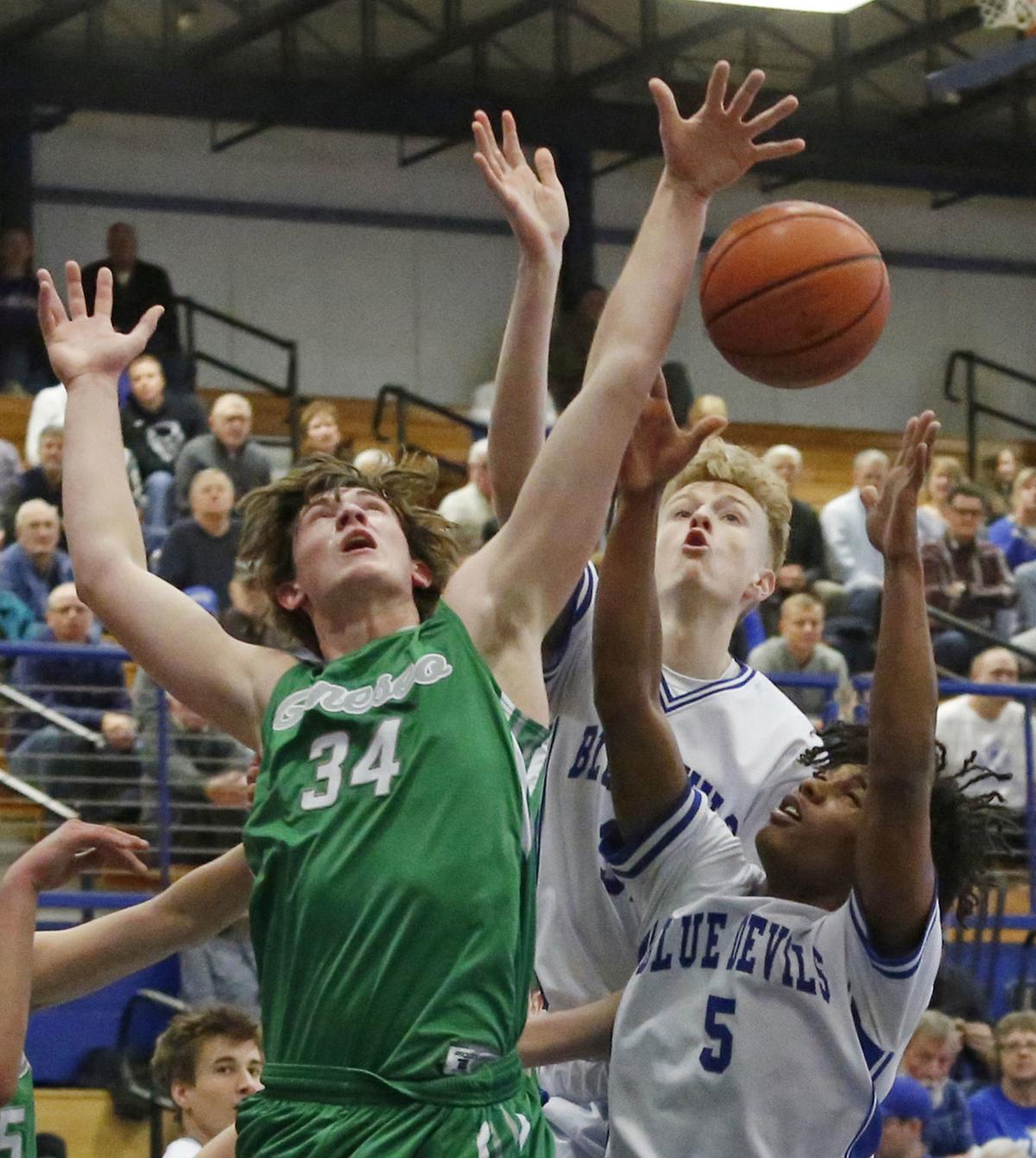 Geneseo's Kade Ariano and Quincy's Ian Richardson and Adonte Crideron fight for a rebound at Blue Devil Gym on Tuesday. 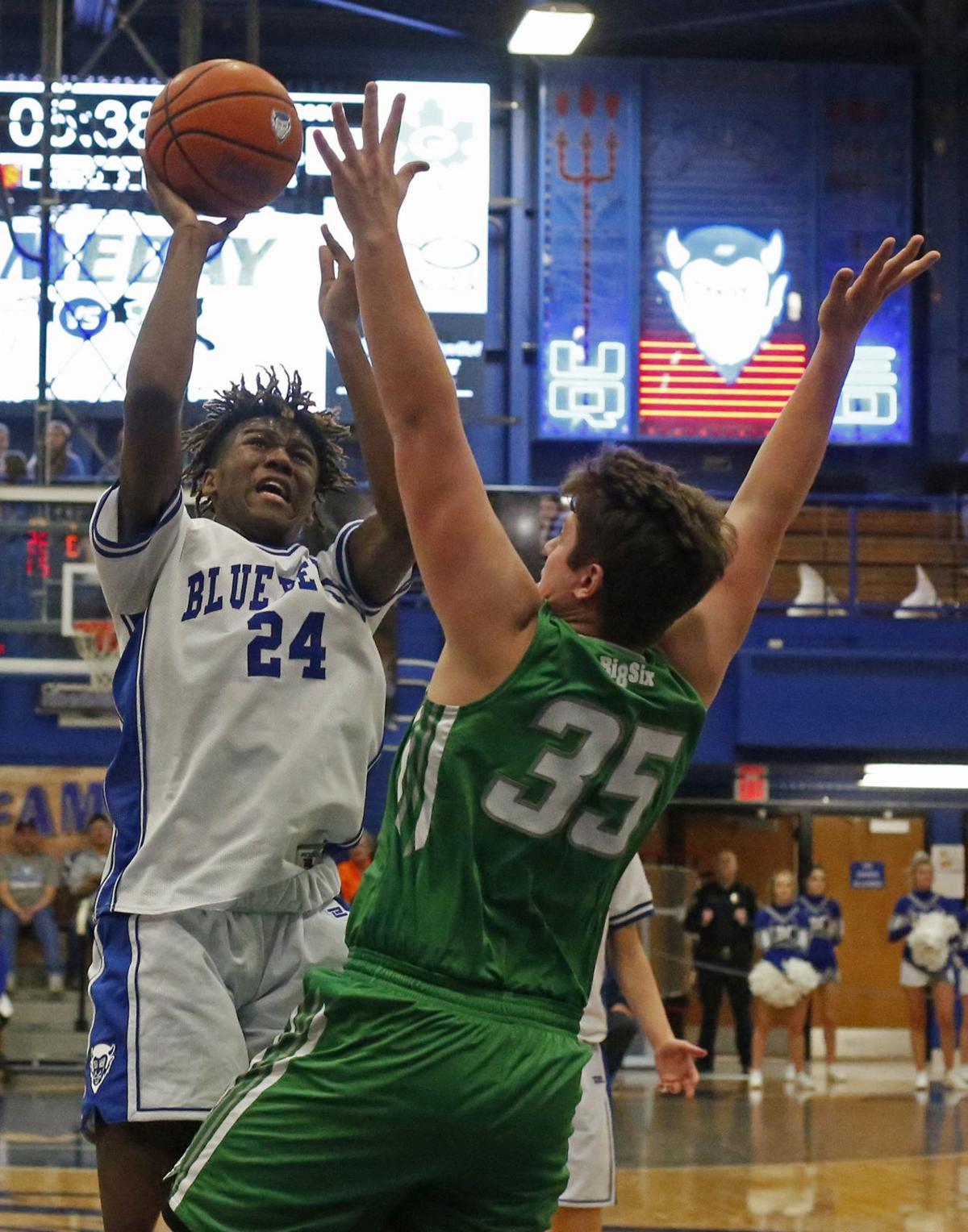 Quincy's Jeremiah Talton takes a shot as he is guarded by Geneseo's P.J. Moser at Blue Devil Gym on Tuesday.

“It just hasn’t translated into how we play in games,” Douglas said.

Until Tuesday night when offensive execution, aggressive defense and heady play off the bench turned things around.

The Blue Devils scored on their final eight possessions of the third quarter, turning a two-point halftime lead into a 13-point advantage, and withstood Isaiah Rivera’s fourth-quarter assault to hold off Geneseo and earn a 69-61 victory in Western Big 6 Conference play at Blue Devil Gym.

The Maple Leafs chiseled the deficit to four twice in the final 70 seconds as Rivera scored 17 of his game-high 32 points in the final frame, but Blue Devils senior point guard Lucas Reis made six consecutive free throws to finish off Quincy’s first victory of 2020.

“We’ve been struggling just a little bit, but I think we’ve all stuck together and worked through it,” said junior guard Sam Hilbing, who scored seven points in the fourth quarter and finished with eight points off the bench. “It’s been really good for us.”

It’s going to make the second half of the WB6 season quite interesting.

Quincy’s victory forged a four-way tie for first place heading into Friday’s games, which will signal the midpoint of the 14-game conference slate. The Blue Devils (11-6) are tied with Geneseo, Galesburg and Rock Island at 4-2 in league play.

“We told these guys you can’t have opportunities like this slip away, where you get yourself in a hole and don’t play very well,” Geneseo coach Brad Storm said. “Not in this conference. You just can’t do it. They’re learning, but at the same time, we’re missing some opportunities.”

The Blue Devils didn’t squander their opportunity to take control with Rivera on the bench.

Quincy led 9-7 when Rivera, the Colorado State signee who leads the WB6 in scoring at 26.7 points per game, picked up his second foul charging into Jeremiah Talton with 3:56 to go in the first quarter. The Blue Devils went on a 9-2 run to end the quarter, and it was part of a 16-2 spurt.

“After all that happened, we had to put our hearts into this in order to get a win,” Talton said.

At halftime, the Blue Devils renewed their focus on attacking off the dribble and getting better ball movement.

A 20-point third quarter followed. The Blue Devils had assists on six of their eight field goals and Talton went 5 of 5 from the field with 11 of his team-high 24 points.

“We moved the ball very well,” Talton said. “It was about getting the best shot. At halftime, Coach said shoot with confidence. We did.”

The Maple Leafs (14-5) made just one field goal over the final six minutes of the quarter, turned the ball over five times and created an insurmountable deficit.

“Part of it was we stopped moving offensively,” Storm said. “We were real easy to guard. We were kind of standing around and weren’t executing. We were just kind of running to spots. So we were having a hard time scoring.”

And when the Maple Leafs finally got in a groove, the Blue Devils countered with strong bench play as Hilbing and Jack Rupert combined for 12 points, four rebounds and two steals in the fourth quarter.

“Just every day, we kept pushing, kept working and kept getting better,” Rupert said. “We worked hard for this.”

Kyle Murray did not see this coming.

Isaiah Rivera is reaping the rewards of a tremendous basketball season.

LaSALLE, Ill. — To the outside world, it’s going to look as though Rock Island took Ottawa lightly Friday night.

Geneseo's Kade Ariano and Quincy's Ian Richardson and Adonte Crideron fight for a rebound at Blue Devil Gym on Tuesday.

Quincy's Jeremiah Talton takes a shot as he is guarded by Geneseo's P.J. Moser at Blue Devil Gym on Tuesday.