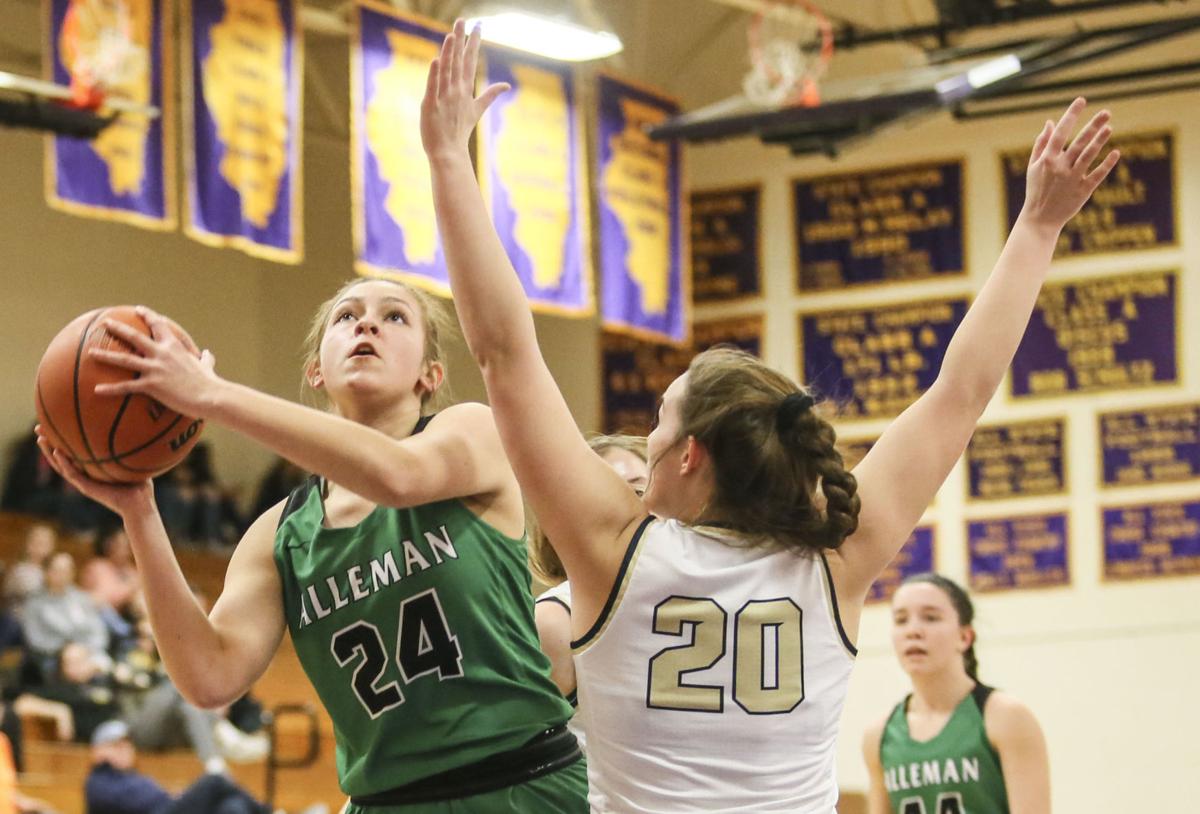 Alleman's Avrie Schmidt goes up for a shot against Mercer County's Karli Stineman (20) in a Class 2A regional game last season. Alleman will not be competing in the winter basketball season following a decision by the Catholic Diocese of Peoria.

The COVID-19 pandemic left more sports cancellations in its wake this week.

Grant Iles, Alleman High School athletic director, confirmed Tuesday afternoon that the school will not be putting teams on the court whenever the prep basketball season is contested.

That move coincides directly with a decree from the Catholic Diocese of Peoria, which sent a letter to high schools within the region that it felt it best not to allow teams from those schools to compete because of the elevated health risk involved with the coronavirus.

“The only official word I have is what was shared this morning from the Diocese with their statement as far as the basketball season,” said Iles Tuesday afternoon. “That's all the information I have.”

When asked if Alleman officials were going to abide by that decision from the Diocese, Iles said “absolutely. … We respect that decision. That's just the way it is.”

Alleman officials had no other comment, referring any further questions to the Diocese.

School officials at St. Thomas More and Danville Schlarman reportedly told their players and school families on Monday that their seasons were canceled. According to a report in the Champaign News Gazette, neither of those schools will be participating in basketball this winter in accordance with the decision made by officials at the Peoria Diocese.

The Peoria Journal Star obtained a copy of the letter from the Diocese that was signed by Daniel R. Jenky, Bishop of Peoria, and Louis Tylka, coadjutor bishop of Peoria.

The letter read, in part:

“The high schools located in the Diocese of Peoria will not participate in the Illinois High School Association basketball season for 2020-21.

“This decision is based primarily on the fact that the Illinois Department of Health has recently released guidelines which raise basketball to a high level risk of potential COVID exposure.

“We realize that in doing our best to address the ongoing serious risks of the pandemic that many decisions may not always be popular.

“Decisions are based on the principles of public safety and health. Our churches and schools are part of a much broader community that is currently facing challenging and unprecedented issues. We ask for your cooperation in adhering to these guidelines.

“Aware that the pandemic impacts us physical, emotionally and spiritually, we pray for the well-being of all in our community.”

Iles declined to comment on how Alleman families were informed the basketball seasons were called off.

That decision comes less than a week after the fate of high school basketball in the state was left up to each school.

In an ongoing debate about the sport, Gov. J.B. Pritzker and his staff reclassified basketball as a high-risk sport just hours before the IHSA convened a board meeting in which it decided to continue the sport in the winter season. The IHSA calendar calls for practices to begin on Nov. 16 with games allowed to start two weeks later on Nov. 30.

The following day, Pritzker announced that because of health concerns basketball would be moved to become a spring sport and not played until February.

That leaves boys basketball in the same revamped season as football and boys soccer. Girls basketball will now be played at the same time as volleyball.

Since last week's contradictory announcements from Gov. Pritzker and IHSA officials, at least three groups have announced their schools will not participate in basketball as a winter sport: Chicago Public Schools, Decatur Public Schools and now the Diocese of Peoria.

PORT BYRON — A little more than a week ago, the Riverdale High School basketball teams got what they believed was the green light to start the 2020-21 season.

For Assumption’s Dawsen Dorsey, nothing was going to make her leave the basketball court.

WB6 hoops seasons on hold, so are plans moving forward

Many schools hold off on start of Illinois prep basketball season

No new game plans were set after a special board meeting Wednesday by the Illinois High School Association.

Alleman's Avrie Schmidt goes up for a shot against Mercer County's Karli Stineman (20) in a Class 2A regional game last season. Alleman will not be competing in the winter basketball season following a decision by the Catholic Diocese of Peoria.