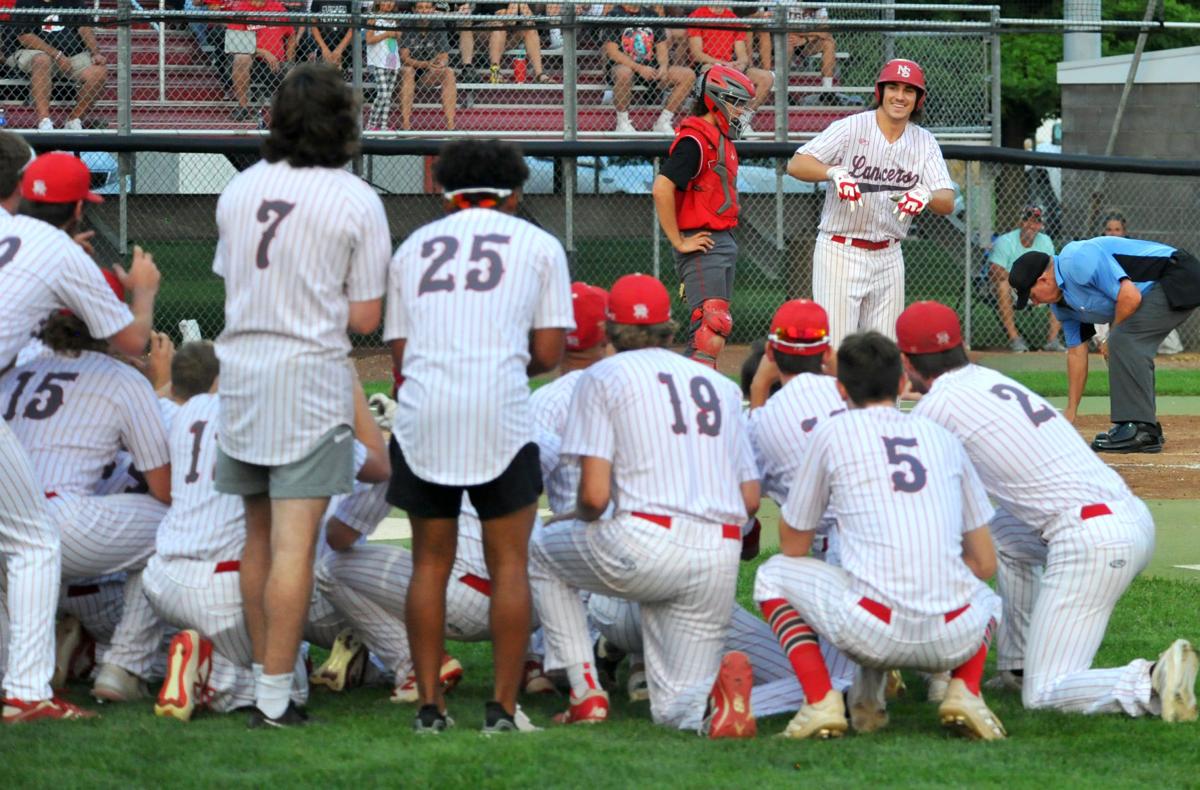 Parker Ruth is greeted at home plate after hitting a home run in the sixth inning against Davenport West in the Class 4A substate baseball semifinal Monday. 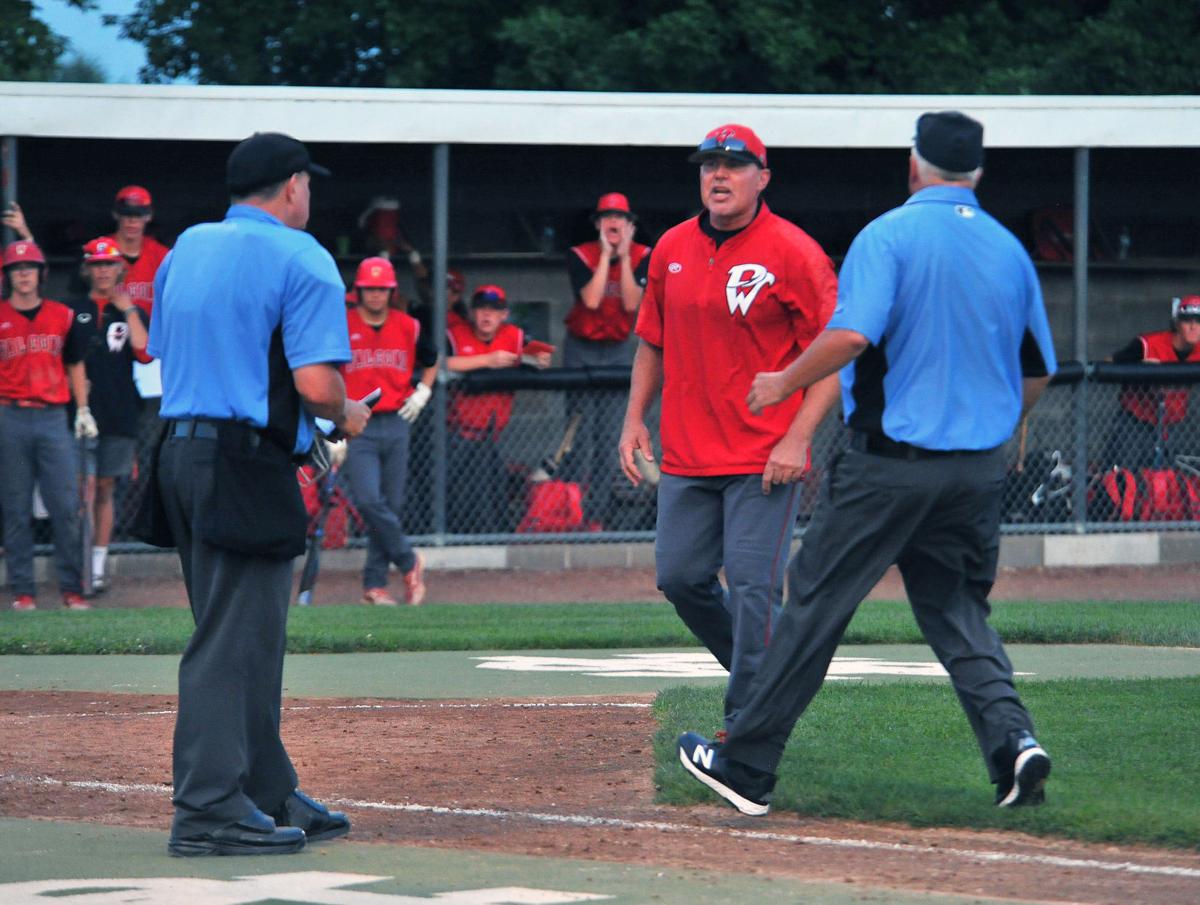 Davenport West coach Scott Beatty confronts the home plate umpire after being ejected from the game in the seventh inning Monday against North Scott.

ELDRIDGE — Parker Ruth said he has not been part of a crazier baseball game than what transpired on Monday night.

Ruth had given his North Scott Lancers the lead against Davenport West in the bottom of the sixth inning of their Class 4A substate semifinal with a solo home run.

Only to watch the visiting Falcons battle back to tie the game at 1-1 in the bottom of the seventh. Ruth, however, was at the plate again in a big spot and his ground ball led to an eventual win for Lancers in the bottom of eighth as North Scott advanced past West with a 2-1 win.

The Lancers (26-13) will travel to Dubuque Hempstead to play for the substate title and trip to state for a 7 p.m. contest on Wednesday. West finishes the season at 23-11.

Ruth came up for the winners in the bottom of the eighth with the bases loaded with no outs as his teammates Cody Sunny and Ryan Campbell had back-to-back singles to start the inning. After a walk to Sam Skarich, it was Ruth’s turn again.

His hit this time was not as dramatic as the home run as he bounced a ball to second base. West’s infield tried to turn a double play but a fielding error allowed courtesy runner Alex Johnson to score the winning run from second base.

“I don’t think I have been a part of anything so cool when it matters,” Ruth said of him being in the middle of many of the key plays. “The moral of the story for the whole game was everyone played hard, everyone played great defense and our guys, especially, found a way to get it done.”

Before Ruth’s home run to break the scoreless tie in the bottom of the sixth, he made a huge catch in left centerfield to keep West from a prime scoring chance in the top of the sixth.

Falcons catcher Dom DeLaPaz drilled a high fly ball to deep left-centerfield to lead off the sixth inning. Ruth and his leftfielder Kaden Kelley were both sprinting and converging on the ball near the fence. Almost at a dead sprint, Ruth reached out to snag the ball right in front of the fence while also avoiding Kelley and crashing into the fence.

It prevented, at worst, a triple and possibly an inside-the-park home run for the Falcons.

“I kind of called off (Kelley) at the last second,” Ruth said of the sequence. “He did get out of the way but he kind of scared me a little bit. In my head, I just had to run as hard as I could to get that ball. In the heat of the moment, I just told myself to call him off and try and make the play.”

With one out in the bottom of the sixth, Ruth drilled the first pitch he saw from West starting pitcher Justin Saskowski over the leftfield wall. Ruth seemed to know he got it as well, gesturing toward his own dugout with celebrating hand signals after making contact.

“I have kind of struggled this season (hitting) but there is one big moment, one big hit in every game that picks up your team,” Ruth said. “I’m just glad I could be a part of that moment.”

Besides Ruth’s home run and the singles in the eighth inning, Saskowski was on for the Falcons. He allowed five hits and struck out six in his seven-plus innings of work.

Skarich was equal to the task as well, allowing one run on four hits while striking out seven in his seven innings pitched. Cody Sunny pitched the eighth for the Lancers to get the win.

It appeared Skarich might get the complete-game win with the 1-0 edge after he got the first batter in the seventh. But West’s RJ Molloy breathed life back into his team with a triple to deep right-center field. Jackson Huffstutler chased him home later with a sacrifice fly to tie the game at 1-1 before North Scott finished the game one inning later.

We're looking at another day with temps in the mid-80s. Here's the breakdown from the National Weather Service.

Parker Ruth is greeted at home plate after hitting a home run in the sixth inning against Davenport West in the Class 4A substate baseball semifinal Monday.

Davenport West coach Scott Beatty confronts the home plate umpire after being ejected from the game in the seventh inning Monday against North Scott.