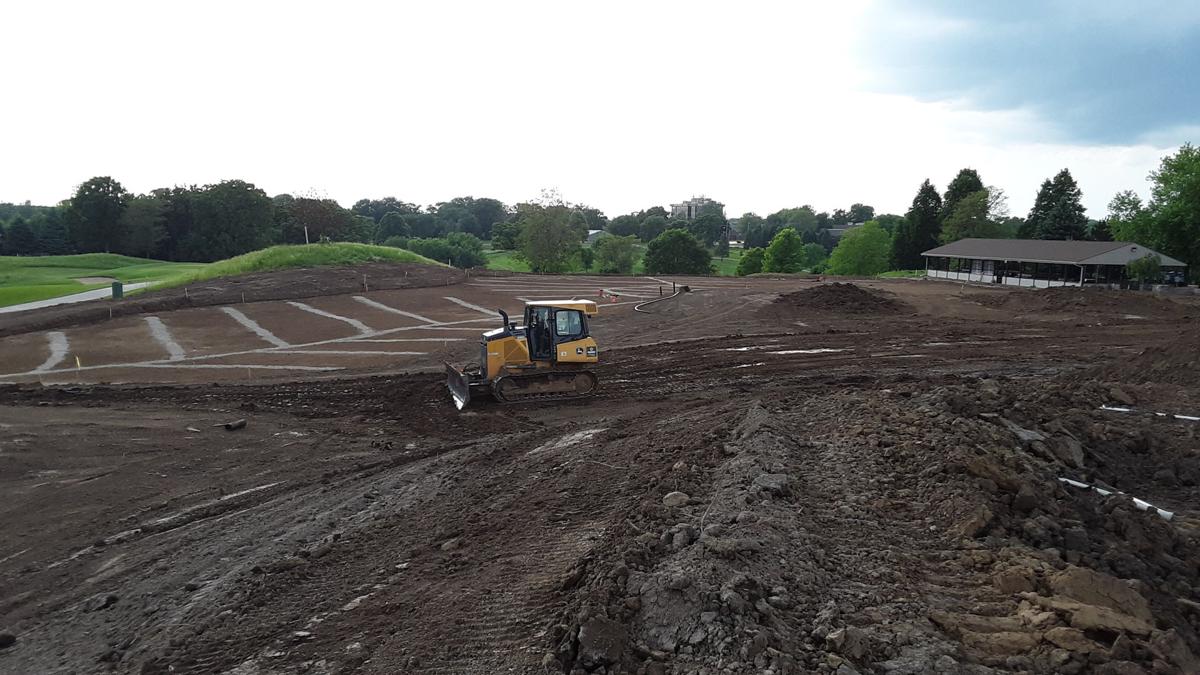 One of the four new greens that will comprise the 18-hole putting course at Palmer Hills Golf Course is shown after drainage had been installed. The new addition to the Bettendorf facility is expected to open in 2021. 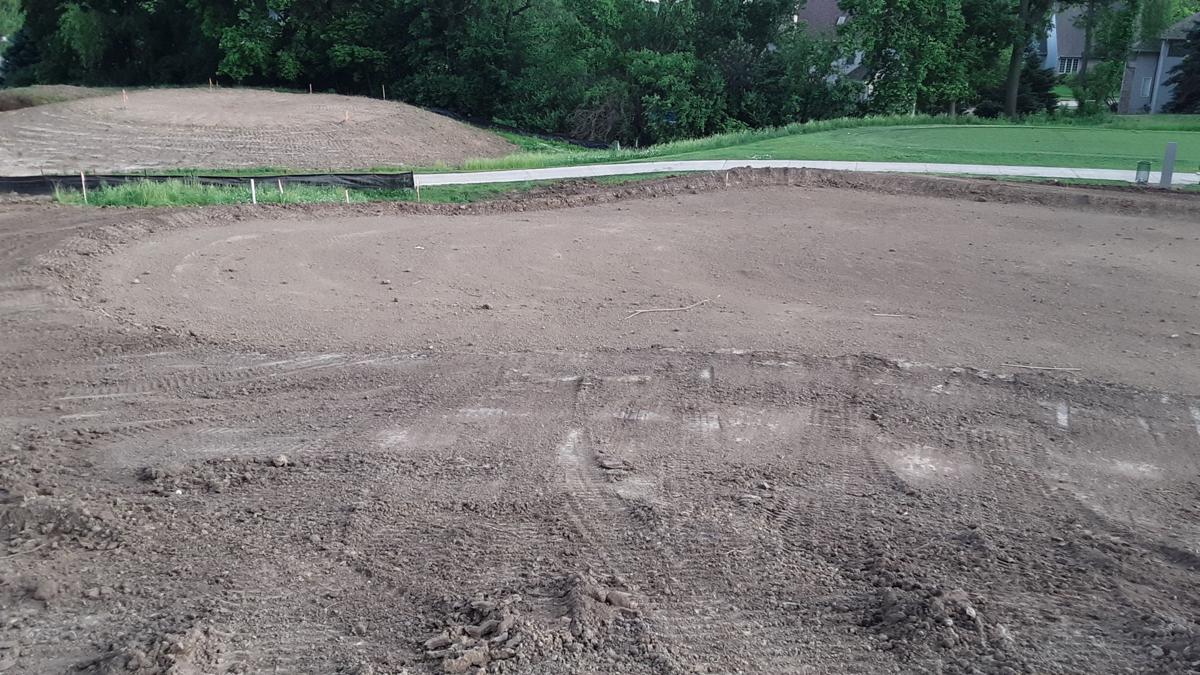 The outline of one of the four new greens that will comprise the 18-hole putting course at Palmer Hills Golf Course is shown in a raw state. A tee box for the proposed short course that could also serve as a back tee for the new par-3 13th hole is shown in the background.

It seems as if every year there are upgrades and improvements being done at the Bettendorf public facility and those are in full force in 2020.

Some of that work for this year is already completed, and another major project is making huge strides toward completion.

Earlier this spring, significant improvements were made to three bridges that cross Stafford Creek on holes 1, 2, 3, 14 and 18.

With that completed, superintendent Brian Hickey continues his dedication to upgrading playing conditions on the par-71 layout.

Hickey has also introduced some subtle changes. Among those are creating a number of no-mow areas that have added some strategy as well as made for easier maintenance practices.

However, there are some very obvious changes taking place at the course. The mounds of dirt, the hum of bulldozers moving earth and the buzz of other work in the heart of the course is hard to miss.

That is where the massive new 18-hole putting course is being built.

The project, which projects to open the facility to a much broader spectrum of those with an interest in the game, is still on schedule for a summer of 2021 opening, according to Jon Waddell, Palmer Hills head golf pro.

The move to add the putting course is seemingly a great one for the course and city. It allows for another source of revenue and caters to burgeoning business at the TBK Bank Sports Complex on the north edge of town, just minutes from Palmer Hills. Families looking for ways to spend time between games or after play of weekend tournaments will have a viable option with the putting course and redesigned driving range.

"It's been pretty well documented that the more social and shorter-time-commitment golfing opportunities are what people want," said Waddell. "People want the less time commitment and more social experiences, so that's what we're trying to provide."

That theory is even playing out at the course this year, according to Waddell. Because of COVID-19 concerns, the driving range has been scaled back with every other hitting bay blocked off by barricades.

"Even with all of that in place, our range numbers are just exploding," said Waddell. "To me, that falls into the same category as what the putting course will — people want to get some golf in but don't want that four-hour time commitment of a round of golf. This will fall right in that same category."

The heavy work on the putting course has been contracted to Landscapes Unlimited of Lincoln, Neb.

“They are hoping to have their portion done by the middle of July,” said Waddell, noting there was a lot of interest through the bid process that was conducted this past winter.

The putting course will actually consist of four individual greens that will be separated by some grassy drainage areas. The four greens will total about 60,000 square feet of putting surface that will be grown in this year by Hickey and his staff.

The space for the putting course was cleared when the par-3 13th hole was moved. With the 14th hole being redesigned and reconfigured into a par-4 hole, the new 13th hole was moved from between the upper parking lot and driving range to the other side of the picnic pavilion south of the top parking lot.

Back to "normal": Well, things may not return to what we once thought of as the real normal this summer — or ever again — but those golfing in Illinois moved a little closer to normal this week. With the state moving to phase 4 of its re-opening process on Friday, the requirements of those golfing in the state relaxed a bit.

Golfers will be able to play in foursomes and tee times will now be spaced out every 10 minutes. Players can now share carts (but at most courses can still ride solo for an additional  fee), but social distancing is still required on the course as much as possible. Most courses are still requiring a mask inside the clubhouse.

Most are also continuing the practice of leaving the flagstick in the cup and also are not providing ball washers or rakes for the bunkers.

The 50% limit on driving ranges and practice areas has been lifted, so getting out and working on your game should be easier.

As always, if you have questions regarding safety practices that are in place, call the course for information.

We're getting closer, folks. Be patient and we will get there as long as we all do our part to stay healthy.

Big loss: The game of golf lost a huge supporter this week. According to Chicago media maven Rory Spears, Jim McWethy, owner of Mistwood Golf Club and the Mistwood Dome in Romeoville, passed away at age 76.

Tom Johnston covers the Quad-Cities golf scene for the Dispatch-Argus-QCOnline and Quad-City Times. He can be reached at tjohnston@qconline.com

PGA Tour sponsor MetLife has designated two small businesses that normally play key roles with the John Deere Classic to receive $25,000 each in charitable donations as a way to support them in light of the COVID-19 pandemic.

Frittelli title defense not meant to be in 2020

It is either the most ironic twist of fate possible or the type of bizarre coincidence that only a conspiracy theorist would thrive on.

(The Quad-City Times is rerunning some of Don Doxsie's most memorable columns from the past. This column originally appeared in the Times on July 12, 2004.)

Even without tourney, JDC can still shine this week

Jhonattan Vegas is scheduled to hit the first tee shot off the first tee on Thursday morning to begin this week's PGA Tour event.

There will be tournament play at TPC Deere Run this week.

One of the four new greens that will comprise the 18-hole putting course at Palmer Hills Golf Course is shown after drainage had been installed. The new addition to the Bettendorf facility is expected to open in 2021.

The outline of one of the four new greens that will comprise the 18-hole putting course at Palmer Hills Golf Course is shown in a raw state. A tee box for the proposed short course that could also serve as a back tee for the new par-3 13th hole is shown in the background.