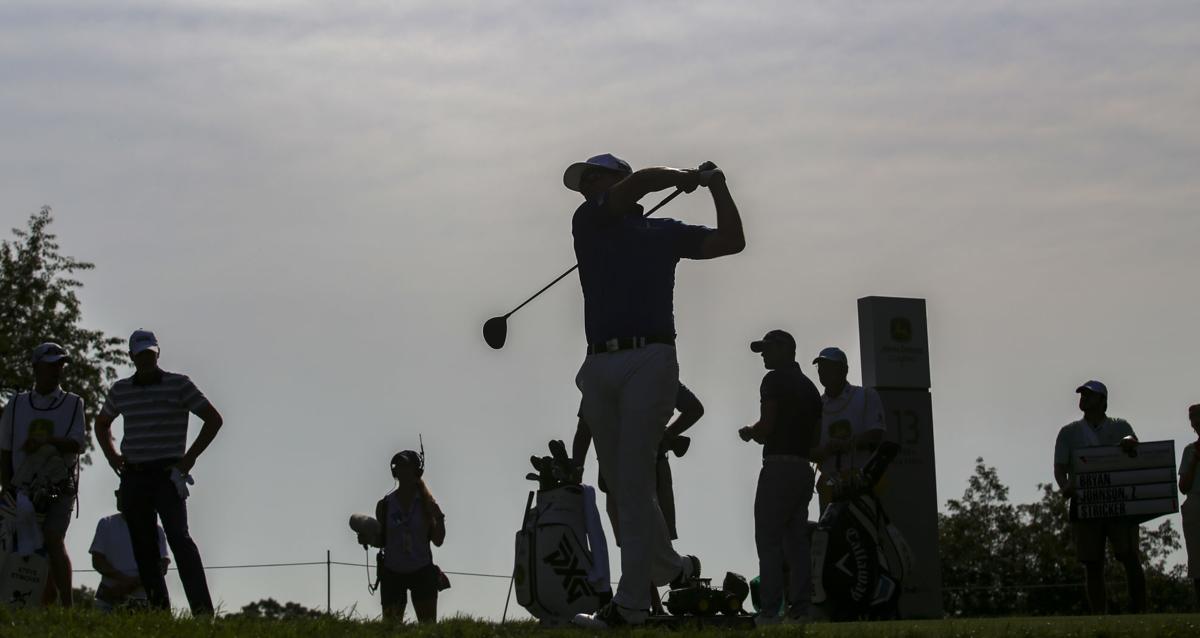 Zach Johnson tees off on No. 13 during round one of the 2018 John Deere Classic. The tournament's 50th year celebration was postponed until 2021 after this year's tournament was canceled because of the COVID-19 pandemic.

In golf terms, 2020 has been nothing short of a flat-out shank off the hosel.

For those non-golfers out there, that's about as bad as it gets.

It started with the golf season being delayed by the COVID-19 pandemic, then separated by a river when those in Illinois couldn't play in Iowa. The game was then brought back in a way that was little more than a tease before finally opening up last week.

The topper — at least I hope it is as bad it gets this year — came Thursday. That was when the annual John Deere Classic golf tournament was pulled out from under us.

While I have been hearing that voice in my head saying that it was a possibility there wouldn't be a tournament this summer, the reality of the situation was a gut-punch on Thursday when news broke that the 50th annual PGA Tour event in the Quad-Cities was canceled.

JDC tournament director Clair Peterson, though disappointed the $6.2 million tournament is off for a year, was not about to be KO'd by the shot.

“We'll have our 50th next year,” he said, trying to find some perspective. “It's a disappointment, but we're not doubled over catching our breath. This is a business where you have to accept changes and surprises and adapt accordingly and move forward. There's no time to grieve or pout.”

But you can still lament and shake your head over this tournament suffering another setback — one of many bumps in the road the event has endured since its inception in 1971.

Chalk it up in the “it figures” category, I guess.

The potential was there for the best field in the history of the tournament. The Open Championship, scheduled for the week after the JDC, had already been canceled and there was a likelihood of scoring one of the strongest fields here in a number of years with top players not facing travel obstacles.

However, because of Illinois mandates set forth by Gov. JB Pritzker, it was becoming obvious that more than likely fans were not going to be allowed at Deere Run. Without fans, the essence of the tournament would be lost. The governor, who has been catching heat for his stay-at-home orders since April, said that no events would be allowed in the state for the entire summer if they drew more than 50 people.

Flattening the curve on the coronavirus pandemic never changed his stance on that and instead let the air out of what was to be a huge JDC party.

The golden anniversary celebration was tarnished — at least for this year.

Still, the decision was understandable from a number of perspectives, not the least of which is keeping everyone on property healthy. The PGA Tour has a 37-page guide on health protocols that are to be in place when Tour events begin in two weeks in Texas.

The economics of it wasn't adding up, either. No fans meant no ticket revenues. Peterson said more than 40 of the roughly 65 clients who annually reserved hospitality space had already taken a pass on hosting friends or clients this year in a chalet or hospitality tent. There was no sponsorship money coming in. The PGA Tour had already cut pro-am events at each stop for the remainder of the season out of health concerns.

Estimates have the JDC making a $55 million annual economic impact on the Quad-Cities. Despite losing a marquee event, Dave Herrell, CEO of Visit Quad-Cities, wasn't throwing in the towel after receiving the news about “an event that is so profoundly important for the community on so many levels.”

“I guess we just have to chalk it up to the situation and that 2020 hasn't been good to anybody,” Herrell said. “I'm confident that we'll get through it and when we do, we'll regroup and say 'Let's figure out how to make the 2021 tournament something that will blow the doors off anything anyone has ever seen.'”

With the wounds still so fresh, it's commendable to keep a stiff upper lip, especially knowing the future is bright for the JDC. It is under contract with title sponsor Deere & Co. and the PGA Tour through 2023. Presumably, the business relationship is so strong that there is no reason to think it won't continue for much longer than that.

I guess despite this year's shank we will just have to be content teeing up a mulligan in 2021.

Ryan McClintock spent the last few years only giving golf lessons and found himself looking for a different path for his professional career.

Zach Johnson tees off on No. 13 during round one of the 2018 John Deere Classic. The tournament's 50th year celebration was postponed until 2021 after this year's tournament was canceled because of the COVID-19 pandemic.