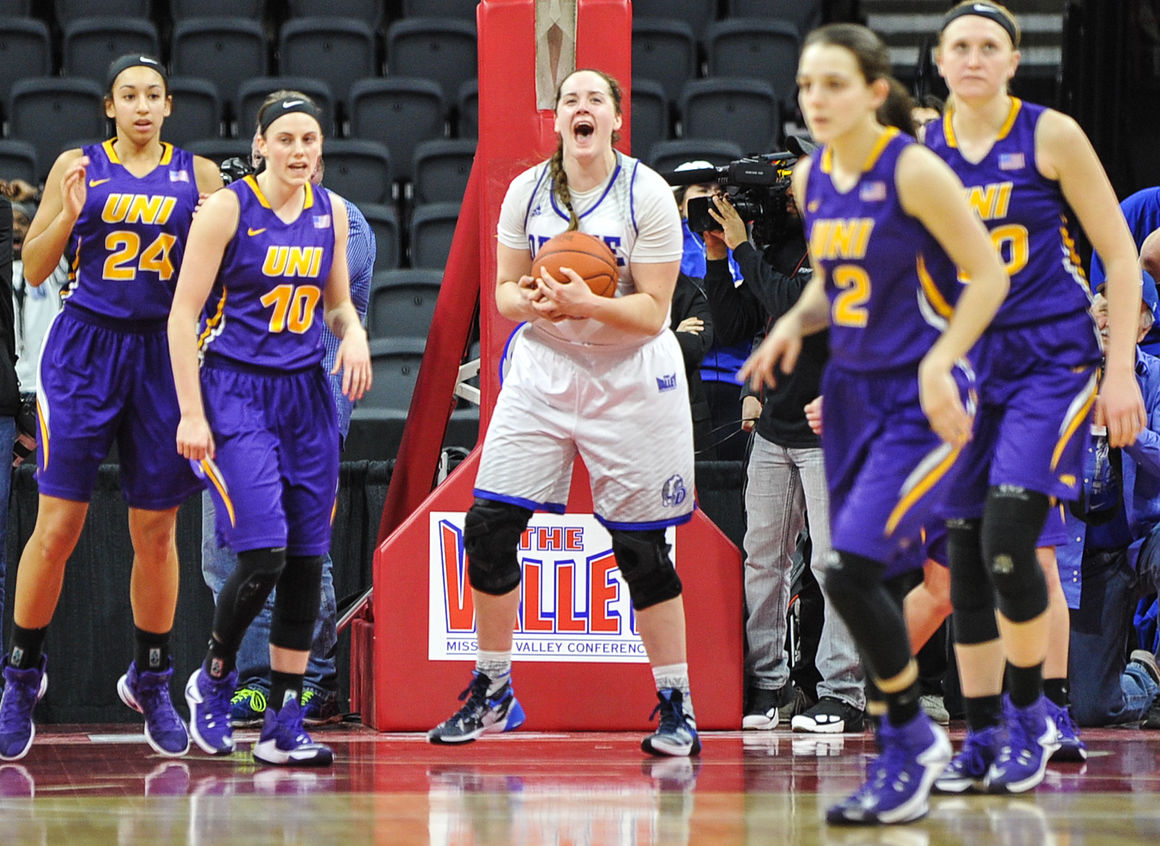 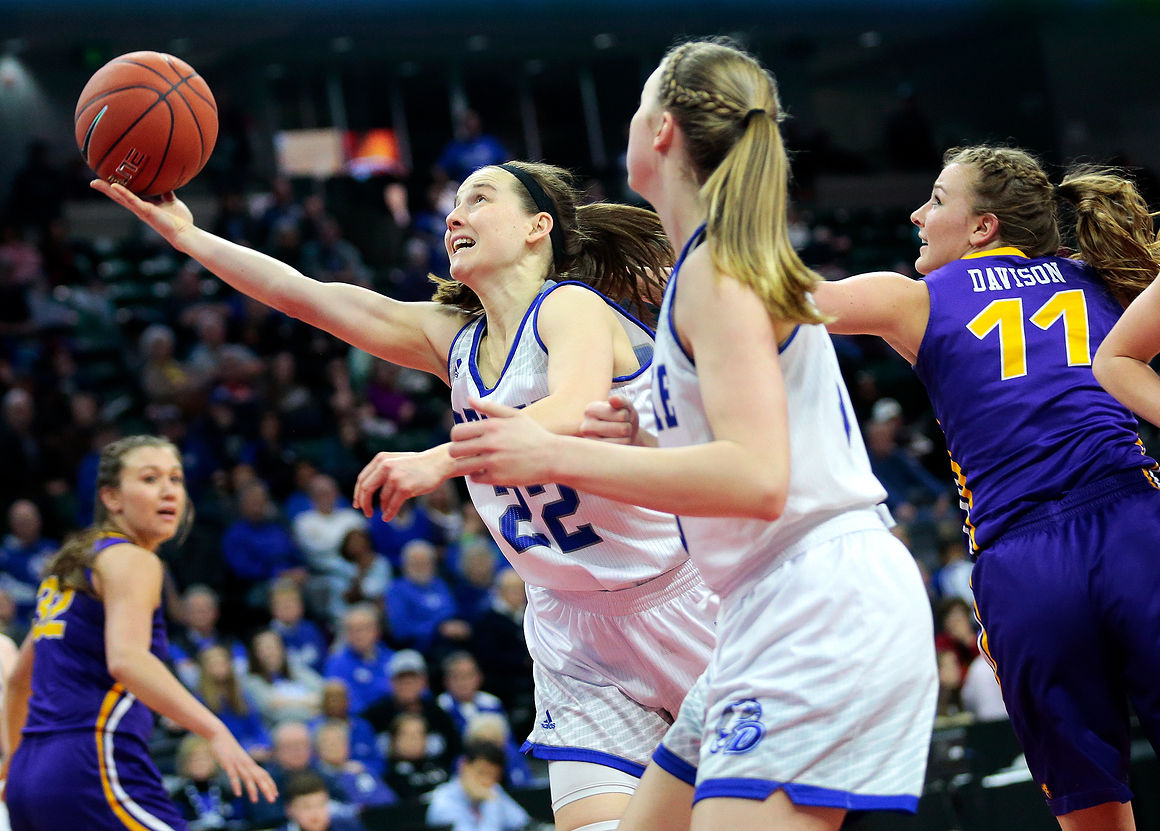 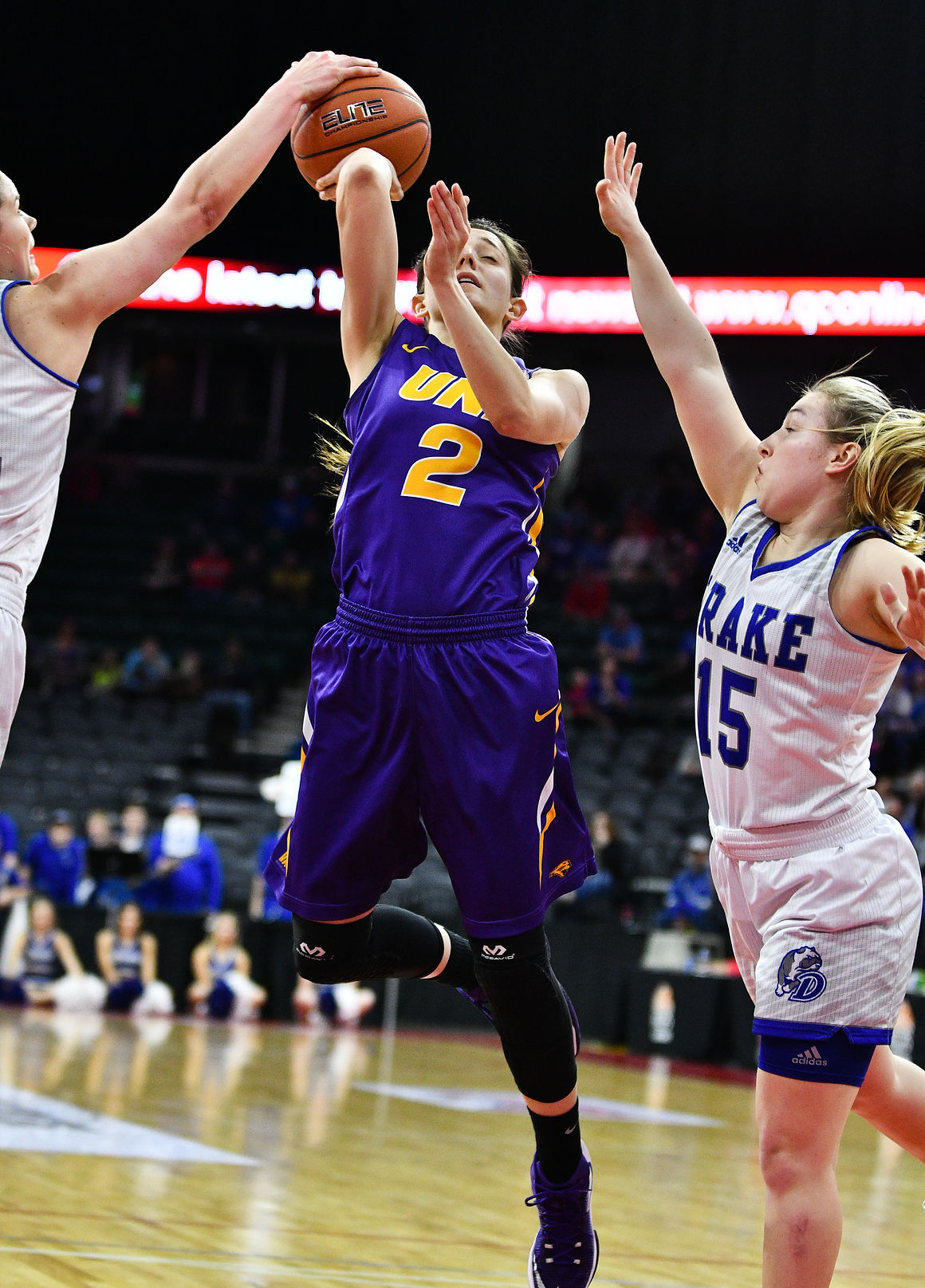 MOLINE — The chorus of the song blaring from the Drake locker room after the Missouri Valley Tournament final said it all.

The Bulldogs danced to "We didn't come to be defeated," from Lauren Alaina's "History." The top-seeded Bulldogs were not, ending the MVC Tournament at the iWireless Center with a 74-69, overtime win over No. 2 Northern Iowa on Sunday afternoon to book their spot in the NCAA women's Big Dance.

It did not come easy. The Bulldogs twice trailed at halftime in the tournament. including by 10 in the title game. At one point in the second quarter, the Panthers led by 13 points.

"You don't win championships on Plan A," Drake coach Sarah Baranczyk said. "I don't know what letter we are on right now; it's not at the beginning of the alphabet, I can promise you that. They have just constantly adjusted."

Trailing by two points with 5.6 seconds left on the clock in regulation, the Bulldogs were looking for "Plan A," Lizzy Wendell, the conference's most outstanding player. When that was not there, they adjusted. The adjustment came in the form of a free-throw-line jumper by the tournament's most outstanding player, Caitlin Ingle, to forge the game's seventh tie and force an overtime.

"The play we drew up wasn't the play that was run. I saw the time ticking down so I had to take the shot," Ingle said. "It's a surreal feeling. Just happy it went in. You have to take a shot at that point. I knew if we got it to overtime, we would be OK."

UNI's Ellie Herzberg nailed a 3 to give the Panthers the lead and set up Ingle's buzzer-beater.

"It was crazy," UNI's Madison Weekly said. "Ellie made a huge shot, a difficult shot. I have no idea how she made it."

Herzberg followed it up with a 3 to start the overtime period, giving the Panthers their lone lead of the extra session. Drake center Becca Jonas nailed a 3-pointer 16 seconds later to tie the game.

Ingle kept her big game going in the overtime session, scoring five of the team's 11 points. She made the go-ahead basket with 3:13 to go.

The Panthers built their 10-point halftime lead by out-rebounding Drake 26-11, including 8-2 on the offensive end.

To UNI coach Tanya Warren, the big turning point came on the last bucket of the first half, a Becca Hittner jumper and free throw to narrow the margin to 10.

"There's a big difference between being up 13 instead of 10 at the half," Warren said. "They had a little momentum to start the half."

The Panthers led by two at the end of three quarters but made just three of their 14 attempts in the period.

"We got a little stagnant offensively," Warren said. "We weren't as aggressive."

Both teams anxiously await today's NCAA Tournament Selection Show. Drake, which earned an automatic bid by winning the tournament, will find out who they will play and where. UNI awaits word on if it earned an at-large bid.

"When you look at our strength of schedule, our RPI and the fact we have two top 25 wins, there is no doubt in my mind that we should be in," Warren said.

2021 Heisman Trophy Market: Where is the value?

Who should take over at LSU?

Who should take over at LSU?

Lamar Jackson has most wins of any QB under 25

Lamar Jackson has most wins of any QB under 25

MOLINE — Laura Leonard, of Des Moines, is a pharmacist by day, a Missouri Valley Conference television analyst by game night. So, when the opp…