CHAMPAIGN — Andre Curbelo had a remarkable freshman campaign last season, dazzling the nation with his ball-handling and passing ability. The 6-foot-1 guard was named the Big Ten Sixth Man of the Year and helped Illinois win its first Big Ten Tournament championship since the days of Dee Brown and Deron Williams in 2005.

Since then the hype around the Curbelo has swelled and so has the love.

He's quickly become a fan favorite among the Illini faithful, and they were out in full force Wednesday afternoon to help the sophomore celebrate his 20th birthday. Curbelo said he would've preferred to celebrate back home in Puerto Rico with his family and close friends, but since that wasn't an option, he decided to do a meet and greet with fans while also releasing new name, image and likeness apparel at Campus Ink in Champaign.

"I don't have my family here. I don't have the people that are gonna be there whether I make it or not," Curbelo said. "So with that being said, instead of trying to get people to give something to me and to get a birthday present for me, I wanted to give people something from me. I know a lot of people wanted different merch to drop. They were so excited with the first drop, so I just wanted to do a little something for my fans and the people that support me."

The Campus Ink doors opened at 9 a.m. for fans to begin making purchases, and Curbelo's meet and greet portion, which cost $20 per ticket, was from 3-5 p.m.

Thomas Hannah of Mahomet was first in line at 7:45 a.m. to buy gear for his son, Landyn, and daughter, Jadyn, who were both in school when Curbelo's merchandise was released. He was still there in the afternoon, by that time joined by his two kids, when Curbelo arrived.

"I got here at 7:45 because I thought it was gonna be packed," Thomas Hannah said while wearing one of Curbelo's new gray hoodies. "(My son) wanted a jersey. (My daughter) wanted (a hoodie). They said they were only gonna have so much of each one."

Jadyn Hannah, 17, said her father's willingness to spend over seven hours at Campus Ink to ensure that their family didn't leave empty-handed was "greatly appreciated." Landyn Hannah, 13, nodded in agreement. He also wore one of Curbelo's latest gray hoodies and went home with an autographed jersey and basketball.

Said Jadyn Hannah: "For (my brother), he really looks up to (Curbelo) a lot because they're both the shorter ones on the court. So he's taking moves from him and everything."

Thomas Hannah said it was an off day well spent with his children, but other Illinois fans had to be a bit more resourceful during Curbelo's meet and greet. Wes Thompson of Monticello works for UPS, and he made a quick pit stop during his break to purchase a jersey and have it autographed for one of his best friends.

"I'm getting married in a week, so I got him a best man gift," Thompson said. "(Curbelo) is his favorite player, too."

Thompson said it was a full-circle moment to see Curbelo again and return the favor by supporting him in his NIL endeavors. Last year, the dynamic guard autographed a blanket for Thompson's newborn son, Fletcher, when Thompson delivered a package to him. Fletcher will celebrate his first birthday Nov. 20.

"We wrapped (my son) in it when he was first born. It was an Illinois blanket," Thompson said. "There's no doubt, he's got no choice but to be an Illini fan."

Linda and Nelson Jones both graduated from Illinois in the '70s and have remained stout fans of their alma mater. Nelson Jones went on to work at the university as a computer programmer in the housing department and retired about a decade ago.

He and his wife said their main reason for coming to Curbelo's meet and greet was on behalf of their daughter, Melissa, who is also an Illinois alum and celebrated her birthday Thursday.

Nelson said he and his wife were happy to get a few shirts autographed as a birthday present for their daughter while also putting some dollars in Curbelo's pocket.

"I think that's great," Nelson Jones said. "It's probably long overdue. As everybody's been saying, the university's made money off of athletes for years, so they should be able to get a little bit back at least."

Curbelo said he was grateful to have fans of all ages come out for his meet and greet, and he had plenty of NIL apparel for them to choose from. There were jerseys, hoodies, sweatshirts and even T-shirts that resembled the cover of superstar rapper Drake's latest album, "Certified Lover Boy," because Curbelo is a big fan of his music.

Several of the sophomore's teammates stopped by to make purchases, too, including fellow Puerto Rican guard RJ Melendez and All-American center Kofi Cockburn. However, it was the steady stream of fans, often strangers, who made Curbelo's birthday worthwhile.

"It means a lot. That's what I play for. That support from the fans and that love is my fuel, it's my gasoline to continue to strive for greatness," Curbelo said. "So it's always good to know that people are supporting you and showing love."

As a kid, Curbelo said he could've never imagined being widely considered as one of the top guards in the country and the subsequent fame that comes with that. He vowed to remain humble as he looks to lead the Illini on a another memorable campaign, starting Nov. 9 at home against Jackson State.

"I grew up in a very small town. Not too many people make it," said Curbelo, who is from Veja Baja, Puerto Rico. "There's only one other person (from there) that I could say is really doing big things and it's Bad Bunny. He's the guy that's making a lot of noise, making a lot of money, so growing up I just never thought I would have a chance. It was such a small town, so I never thought I would get noticed like that, but I was blessed.

"My family trusted me, and I was able to trust myself, have confidence, trust my work ethic and put in the work. The rest took care of itself."

Illinois dropped to 2-2 after a poor shooting performance.

Watch now: Illinois would take bowl bid with 5-7 record, but first it has to beat Northwestern

Illinois head coach Bret Bielema is trying to focus on capturing the Land of Lincoln Trophy and winning on Senior Day instead of a bowl possibility.

Watch now: Bielema plans to be on Illini sidelines for season finale against Northwestern

Illinois head football coach Bret Bielema said he should be with the team in person no later than Friday and on the sidelines Saturday in season finale against Northwestern.

Illinois opens with a victory.

With Bret Bielema not around after testing positive for COVID-19, Illinois players confident assistant George McDonald can lead team to victory at Iowa.

Ty Rodgers has signed with University of Illinois basketball

"I’m disappointed that I will not be with our team this week when we travel to Iowa, but I’m grateful that I’m vaccinated and received the booster shot last week." 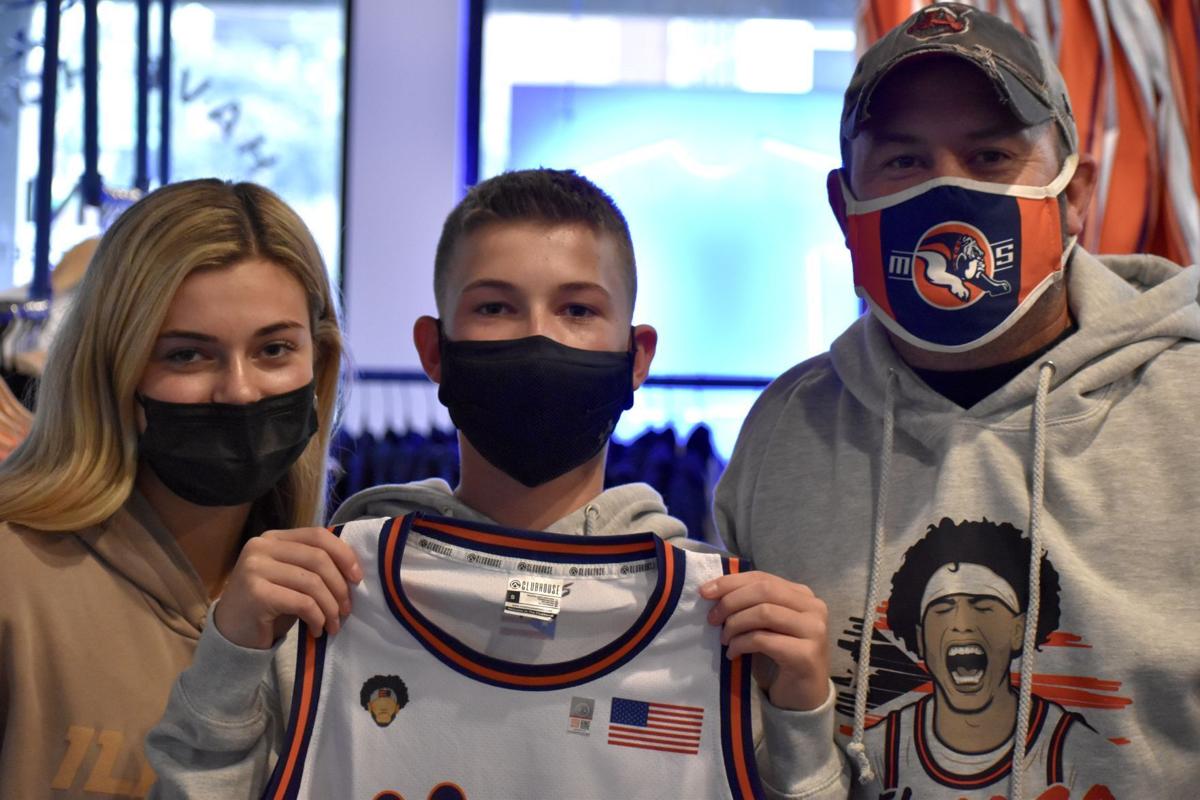 Illinois fans, from left, Jadyn, Landyn and Thomas Hannah were thrilled to meet star guard Andre Curbelo and purchase some of his apparel Wednesday. 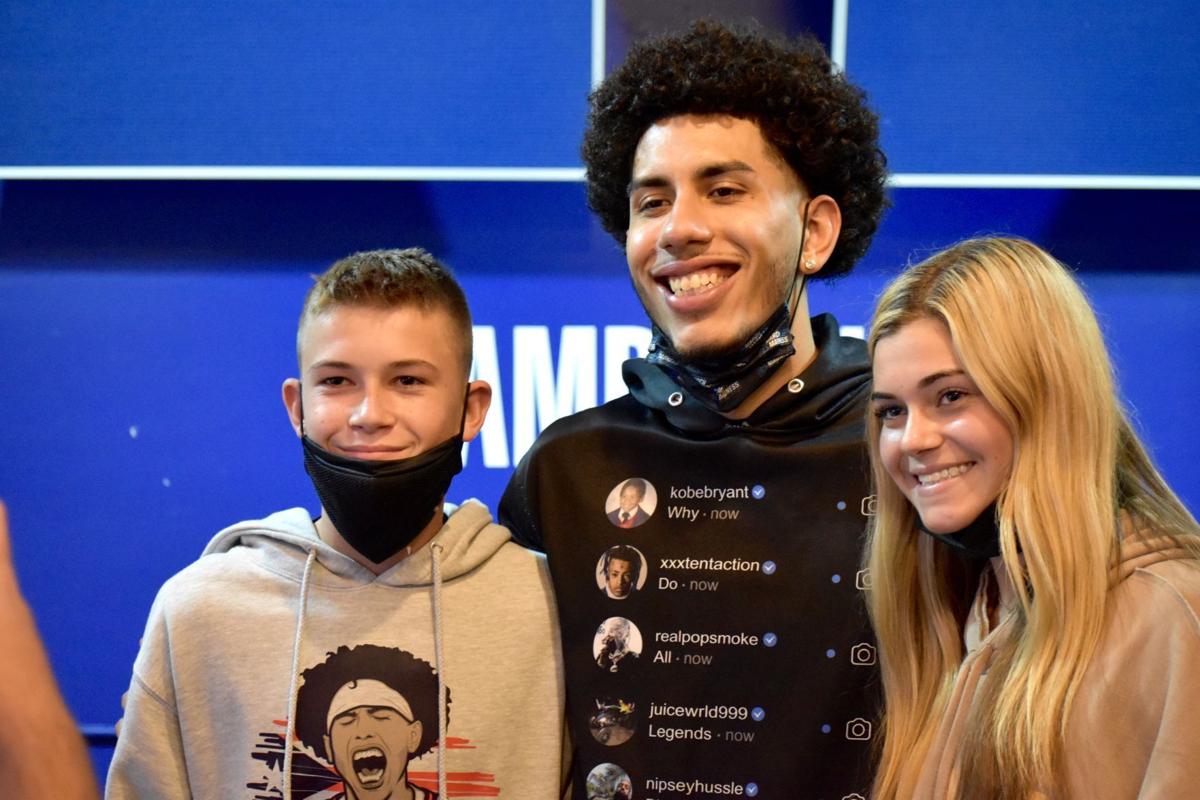 Illinois guard Andre Curbelo poses for a photo with Illini fans Landyn, left, and Jadyn Hannah during a meet and greet Wednesday. 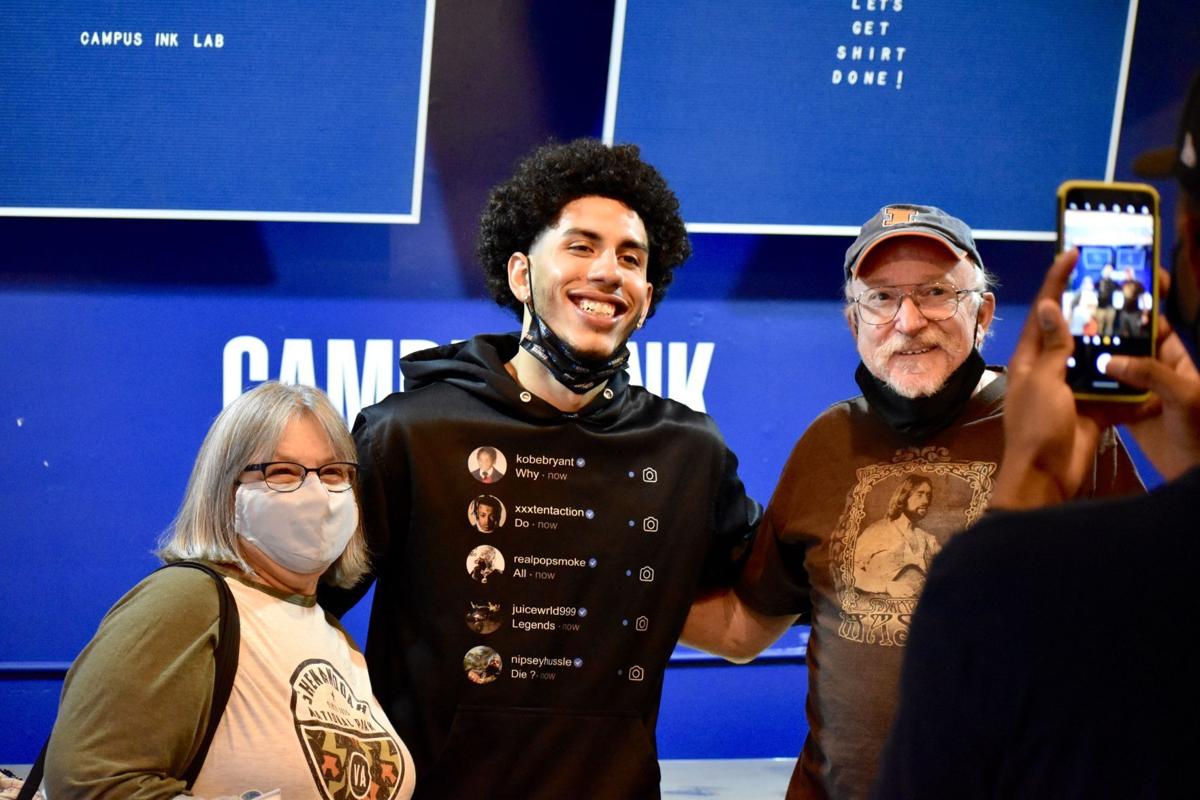 Standout guard Andre Curbelo poses for a photo with Illinois grads and fans Linda, left, and Nelson Jones on Wednesday. 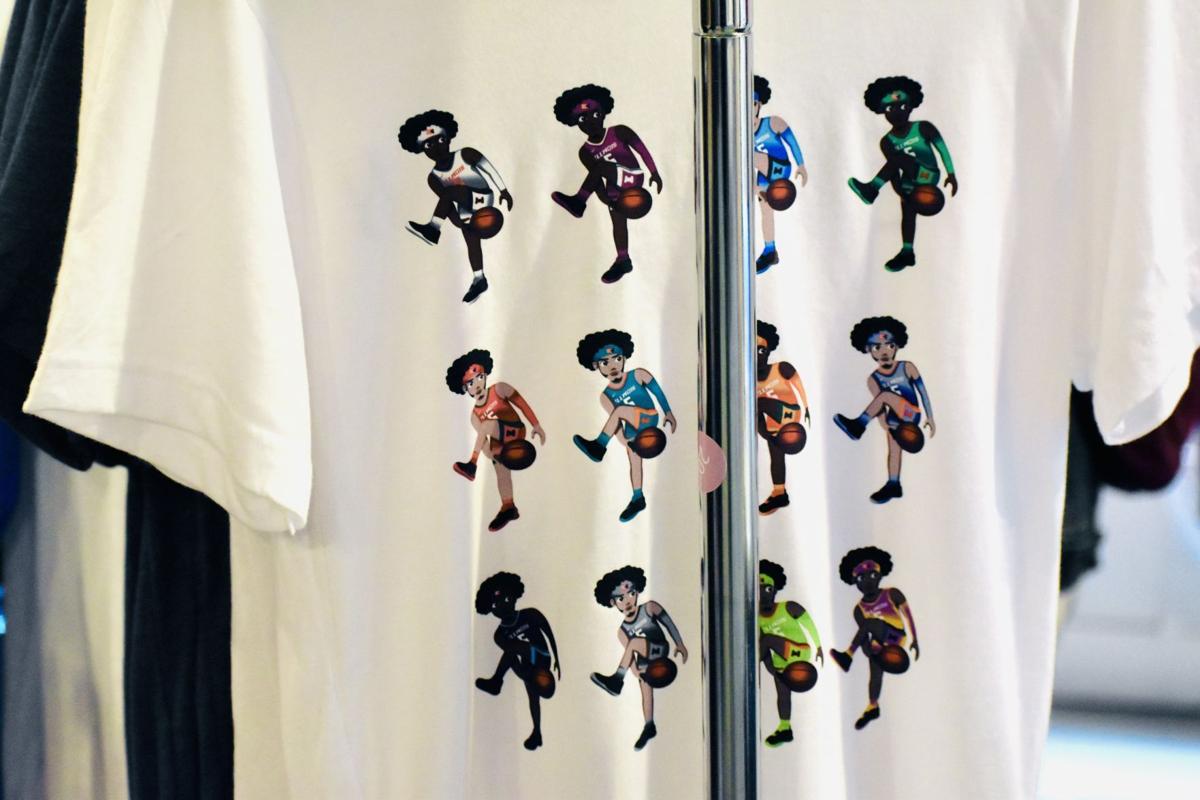 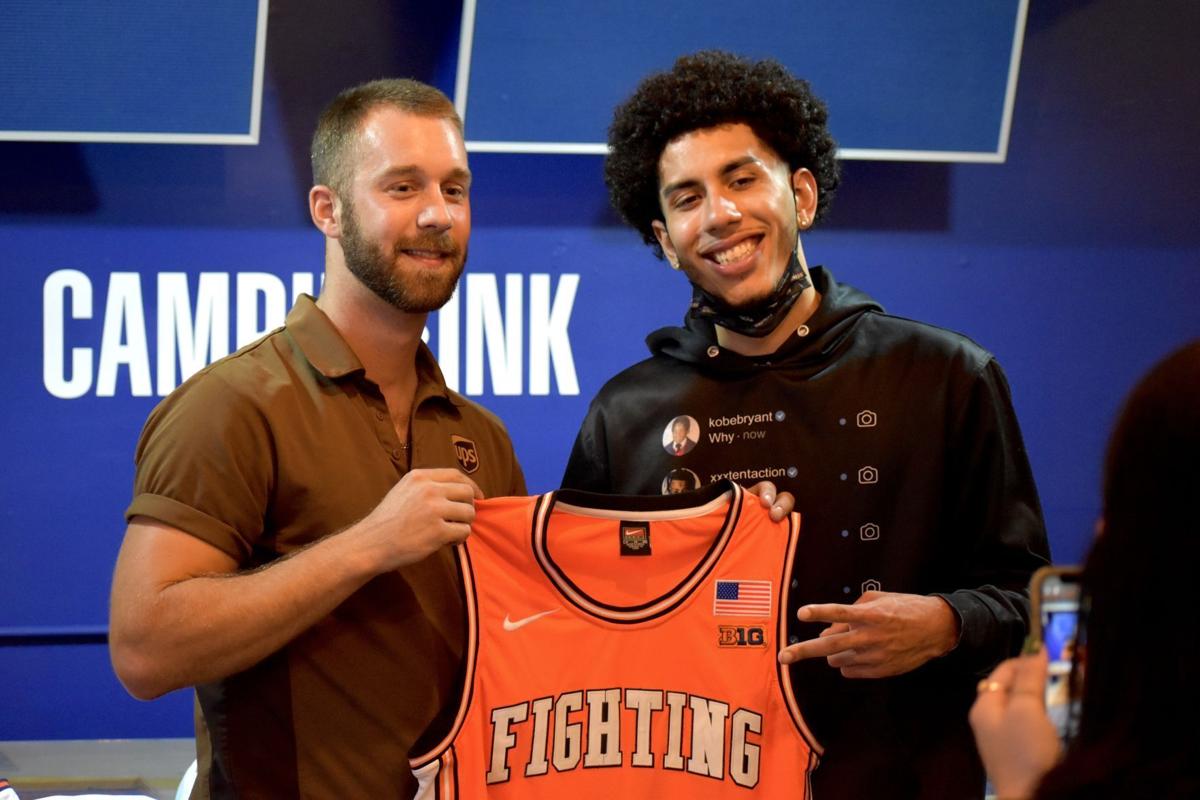 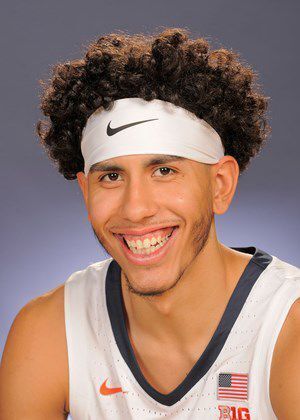