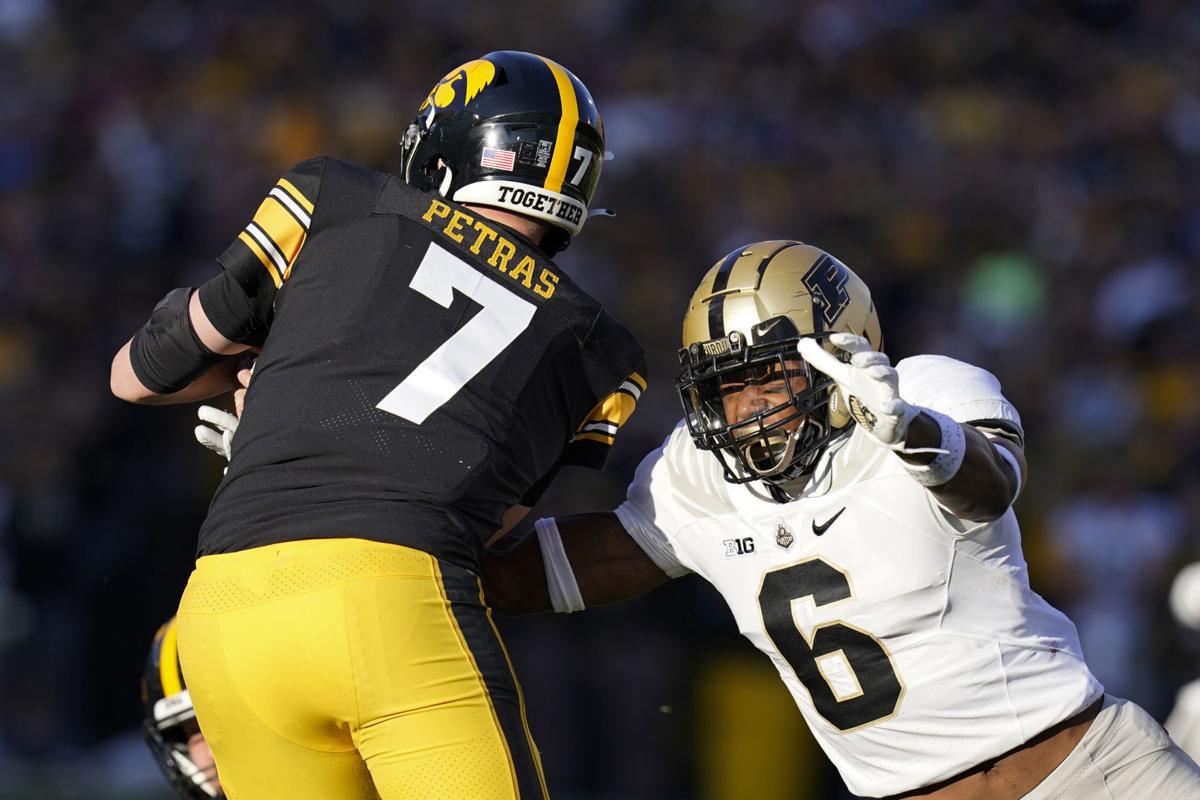 Purdue linebacker Jalen Graham tackles Iowa quarterback Spencer Petras during the second half of the Boilermakers' 24-7 win over the Hawkeyes on Oct. 16 at Kinnick Stadium. 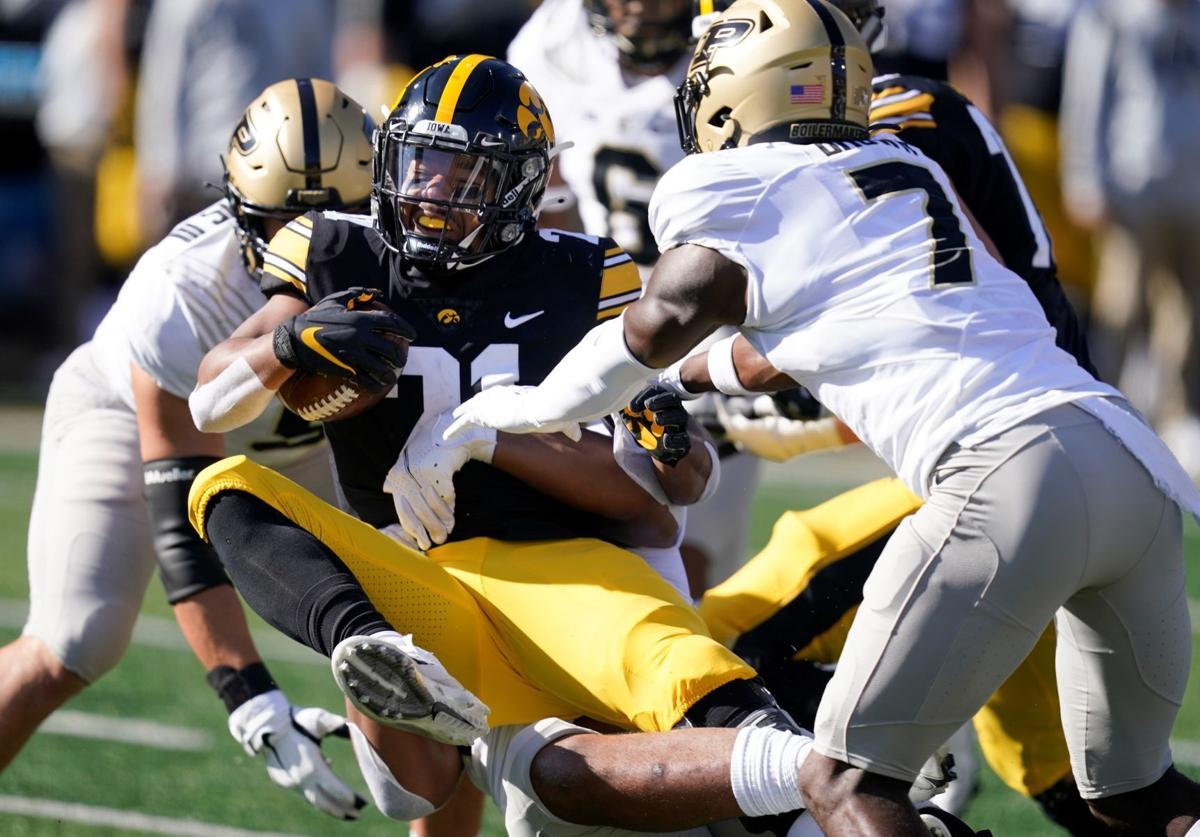 Iowa running back Ivory Kelly-Martin (21) is tackled by Purdue cornerback Jamari Brown (7) during the first half of Saturday's game. The Hawkeyes averaged 2.5 yards per rushing in a 24-7 loss.

Five things to think about following the 11th-ranked Iowa football team's 24-7 loss to Purdue on Saturday at Kinnick Stadium:

The offense was unable to capitalize, but Iowa's return game was as good as it has been all season.

The Hawkeyes' Charlie Jones returned two punts for 37 yards, an 18.5 average that is well above his season average of 10.7 yards per return.

Jones contributed to Iowa averaging 41 yards on its three kick returns as well, averaging 28 yards on his two returns, both above the team season average of 24.9 yards.

Ivory Kelly-Martin had the longest run back of the day, a 67-yard return to the Purdue 19-yard line in the fourth quarter to set up a drive that ended with a failed sneak attempt on a fourth-and-1 play from the 10.

Purdue piled up 463 yards of offense against an Iowa defense that had allowed more than 300 yards just once through its first six games, the 339 it surrendered at Iowa State.

The Boilermakers averaged 6.1 yards on the 76 plays it ran against the Hawkeyes, an average that doubled to 12.2 on the 31 passes Purdue completed.

David Bell continued to be a thorn in Iowa's side, setting a Kinnick Stadium receiving record with 240 yards on 11 catches.

Bell, who has totaled 558 yards on 37 receptions versus the Hawkeyes over the past three seasons, said he didn't know how many yards he had accumulated until his mother told him during a postgame conversation.

He said the challenge of playing a clean game against a turnover-producing defense was his motivation.

"I don't think playing Iowa had as much to do with it as wanting to prepare for the number two team in the country,'' Bell said. "I knew they had 16 interceptions coming in, so I knew that I had to play a clean game.''

Iowa and Purdue entered Saturday's game ranked 13th and 14th in the Big Ten in rushing yards per carry.

At the end of the day, the only thing worse than the 2.6 yards the Boilermakers averaged per rush was the 2.5 yards the Hawkeyes gained whenever they attempted to run the football.

Iowa gained only 76 yards on the ground on 30 attempts, the third time in seven games the Hawkeyes have accumulated fewer than 100 rushing yards.

Petras' connections with the receivers were a struggle as well. After hitting Keagan Johnson for a 38-yard gain on Iowa's first play of the game, the Hawkeye quarterback threw for just 157 yards on his final 16 completions of the game.

"It came down to execution and they were just more ready than we were,'' Iowa center Tyler Linderbaum said.

Complementary football is one of those terms that gets tossed around frequently, but one of the strengths of Iowa's 6-0 start to the season vanished Saturday.

The Hawkeyes' offense, defense and special teams spent the first half of the season feeding off of each other, setting each other up for success.

After collecting 20 turnovers through six games, Iowa's defense turned Purdue over just once and that came when TJ Sheffield fumbled the ball into the end zone as he attempted to stretch around the pylon in failed hopes of adding to the Boilermakers' third quarter lead.

Two sacks and an incomplete pass later, Iowa punted the ball away.

" I need to do a better job of getting the ball out of my hand but that was a big turning point if we score there,'' Petras said. "... There will be plenty of evidence on the tapes. We'll just have to see how we can do better.''

The Hawkeyes also missed a field goal after a 17-play drive stalled, couldn't get a point after a return set the Hawkeyes up on the Purdue 19-yard line and turned the ball over four times on interceptions thrown by Petras, including on Iowa's last three possessions.

With a bye on the schedule this week, the Hawkeyes have some time to chew on this one.

Iowa doesn't play again until visiting offensively-challenged Wisconsin on Oct. 30, providing the Hawkeyes with an opportunity to hit the reset button for a five-week race that will determine the winner of the Big Ten West.

Petras pointed out that at 6-1 the only goal that is off the table for the Hawkeyes is an unbeaten regular season.

"The rest of them are all still out there,'' Petras said.

Those will only matter if Iowa can learn from what transpired Saturday and continued the week-to-week growth it demonstrated before stumbling against the Boilermakers.

"It's not going to be easy from here on out,'' Linderbaum said. "There's still going to be a target on our back and we are going to have to match that energy. We have to be ready for that.''

The sun came up Sunday morning, and returned again today, as the does the first of the trimmed down bye-week version of the Hawkeye 10@10. Today’s edition focuses on Saturday’s loss to Purdue and the work of former Hawkeyes elsewhere in the game.

Purdue linebacker Jalen Graham tackles Iowa quarterback Spencer Petras during the second half of the Boilermakers' 24-7 win over the Hawkeyes on Oct. 16 at Kinnick Stadium.

Iowa running back Ivory Kelly-Martin (21) is tackled by Purdue cornerback Jamari Brown (7) during the first half of Saturday's game. The Hawkeyes averaged 2.5 yards per rushing in a 24-7 loss. 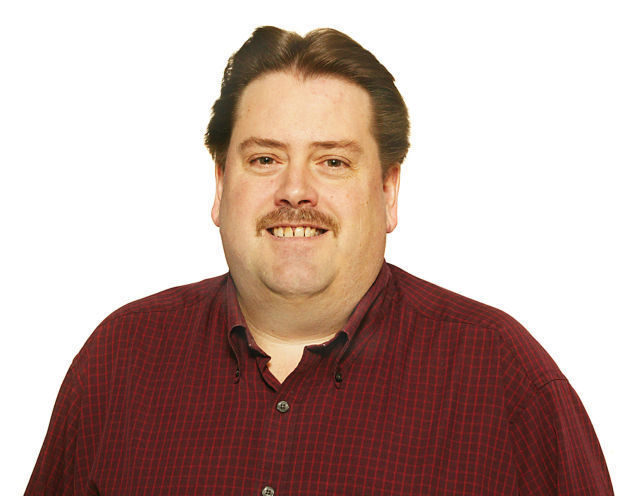