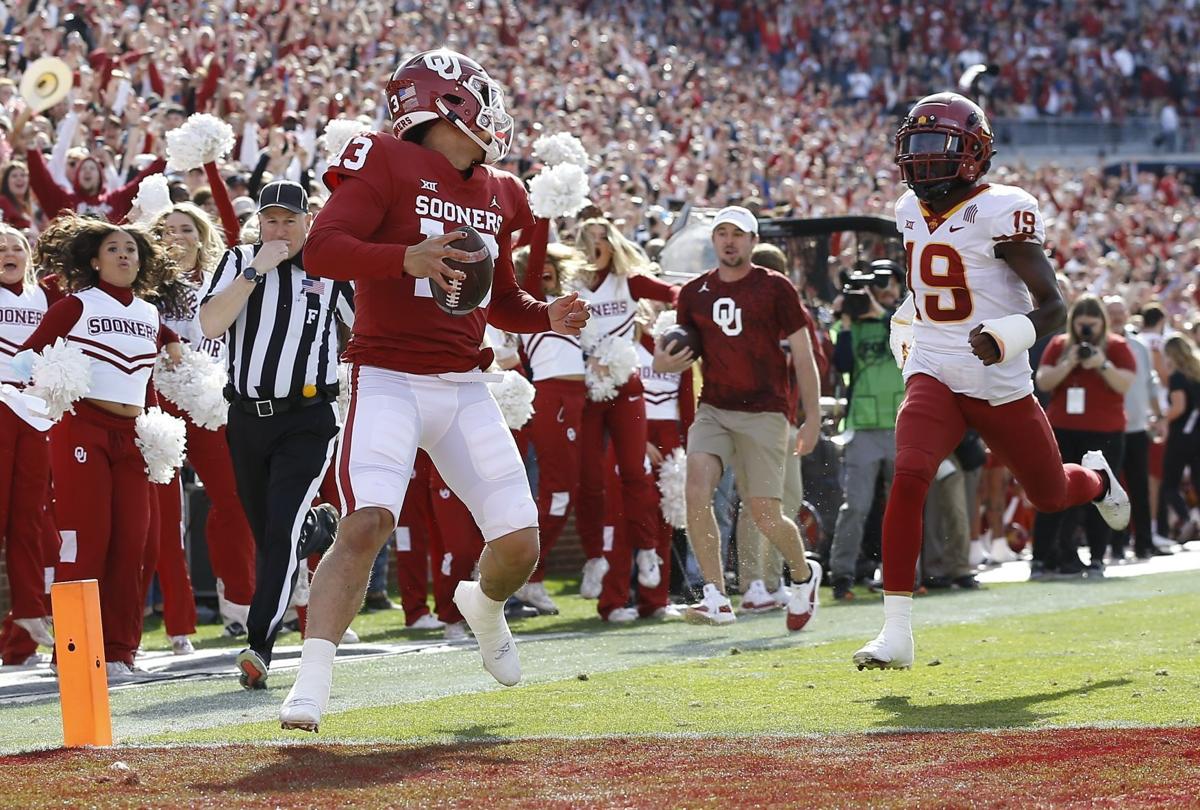 Oklahoma quarterback Caleb Williams (13) looks back at Iowa State defensive back Kym-Mani King (19) as he crosses the goal line for a touchdown during the first half of Saturday's Big 12 Conference game in Norman, Okla. The Sooners beat the Cyclones 28-21. 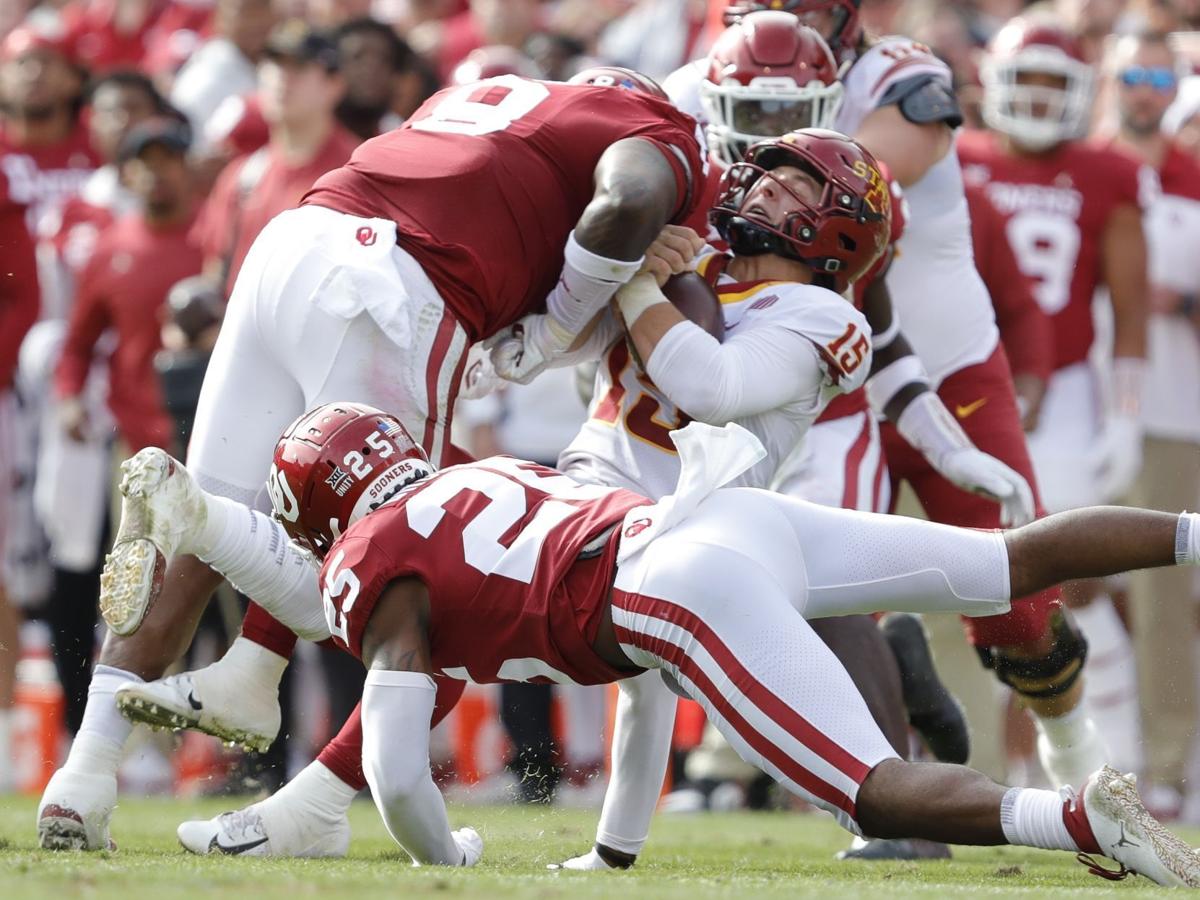 Oklahoma defensive lineman Perrion Winfrey (8) tackles Iowa State quarterback Brock Purdy (15) during the first half of Saturday's Big 12 Conference game in Norman, Okla. It was a rough day for Purdy as the Cyclones dropped a 28-21 decision.

The defenses for both the Iowa State Cyclones and Oklahoma Sooners lived in the other's backfield during Saturday's Big 12 Conference battle in Norman, Okla.

The Sooners had seven sacks against Iowa State, which had allowed just 12 all season. Meanwhile, the Cyclones had four sacks and nine tackles for loss.

Oklahoma’s pressure was too much for Iowa State to overcome as the Sooners beat the Cyclones 28-21.

The No. 12 Sooners kept alive their chances for a conference title as Caleb Williams passed for a touchdown and ran for another and  Jalen Redmond returned a fumble for a score.

Kennedy Brooks ran for 115 yards for the Sooners (10-1, 7-1 Big 12, No. 13 CFP), who bounced back from a loss to Baylor and solidified their chances of reaching the Big 12 title game and winning a seventh straight conference title. They also kept alive their slim College Football Playoff hopes and did their part to set up a showdown with No. 9 Oklahoma State next Saturday to close the regular season.

At one point, Iowa State quarterback Brock Purdy was taking such a beating that he missed two drives while he was in the locker room getting checked out for a possible injury.

Hunter Dekkers took over for Purdy with the Cyclones down 21-7.

On Dekkers’ second pass, he threw an interception. On the ensuing Oklahoma possession, the Cyclones returned the favor when linebacker Jake Hummel tipped a Caleb Williams pass, which was intercepted by Craig McDonald.

Iowa State capitalized thanks to some incredible plays by key players.

Kicker, punter and placekicker Andrew Mevis gained 29 yards on a fake punt to keep alive Iowa State’s drive. A few plays later, on third down, running back Breece Hall made a stunning one-handed, diving catch in coverage. After the Hall play, Dekkers found tight end Chase Allen over the middle of the field, who drug four Oklahoma defenders into the end zone for a 12-yard touchdown.

After that drive, Purdy returned from the locker room and took over for Dekkers, who finished completing five of his nine passes for 29 yards and a touchdown.

“He’s a warrior,” tight end Charlie Kolar said of Purdy on the Cyclone Radio Network. “I was worried about him — I just hope he’s doing alright. I love him. He embodies what it means to be a warrior and a football player. I can never be mad at Brock because I know he puts everything he has into every play.”

Oklahoma capitalized thanks to running back Kennedy Brooks. Brooks had 46 rushing yards on three carries to put Oklahoma within the 10-yard line. Fellow running back Eric Gray finished the job Brooks started and scored on a 7-yard touchdown run and extended the lead back to seven with five minutes left.

The offensive line finally found its footing and gave Purdy plenty of time. Purdy found Kolar early and often on the drive. Kolar, the Norman native, had three catches for 44 yards on the drive, including the touchdown catch to bring Iowa State within a score.

The Iowa State defense forced a three-and-out and the Cyclones had two minutes to try and tie the game.

Purdy once again went back to Kolar early and often. Kolar had five catches for 79 yards on the final drive, getting Iowa State down to Oklahoma’s 21-yard line. After a spike and two incompletions, the game was on the line on 4th and 10.

Purdy was under pressure but had an open Chase Allen, but the ball sailed and was intercepted by Oklahoma’s Patrick Fields, which essentially ended the game. Oklahoma took a knee and the game was over.

“Let’s tip our hats to Oklahoma, that’s the best defensive front in the Big 12,” coach Matt Campbell said on the Cyclone Radio Network. “Yet our guys never flinched. Bad things happened and our guys kept playing. We had our chances but from a precision and detail standpoint we didn’t take advantage.”

Purdy finished with 281 yards on 30 of 41 passing, a touchdown and an interception.

Kolar, in his last Big 12 road game and his last trip back home to Norman, had the best game of his career, making a career-high 12 cataches for a career-high 151 yards and two touchdowns.

“It’s nice to be home but I try to treat every week the same,” Kolar said. “The loss hurts and I don’t try to reach for extra motivation but obviously it is my home town and I’m excited to be back.”

Iowa State closes out the regular season on Friday against TCU in Ames.

Hawkeyes get their title shot, will face Wolverines

Iowa’s football team is going back to work Sunday.

One Eighty founder to be honored at Heroes Game

A Davenport man will be recognized as Iowa’s community hero for 2021 at Friday’s Iowa-Nebraska football game.

Hawkeyes have variety of bowl possibilities

IOWA CITY — There is more at stake than the Heroes Trophy when Iowa concludes the regular season Friday with a 12:30 p.m. football game at Nebraska.

The fifth quarter: From exceptional to ugly, Iowa just wins

LINCOLN, Neb. — Kirk Ferentz likes to say his Iowa football team will seldom be the "prettiest car in the lot," but it will reliably reach its destination.

Huskers' Martinez out for Hawkeye game

As a University of Iowa quarterback returns to the depth chart from a shoulder injury in time for Friday’s Iowa-Nebraska Big 10 Conference football game, an injury will sideline the Cornhuskers’ starter.

Lopsided losses by Oregon and Michigan State created movement within the top 10 on my ballot for this week's Associated Press college football poll.

Oklahoma quarterback Caleb Williams (13) looks back at Iowa State defensive back Kym-Mani King (19) as he crosses the goal line for a touchdown during the first half of Saturday's Big 12 Conference game in Norman, Okla. The Sooners beat the Cyclones 28-21.

Oklahoma defensive lineman Perrion Winfrey (8) tackles Iowa State quarterback Brock Purdy (15) during the first half of Saturday's Big 12 Conference game in Norman, Okla. It was a rough day for Purdy as the Cyclones dropped a 28-21 decision.