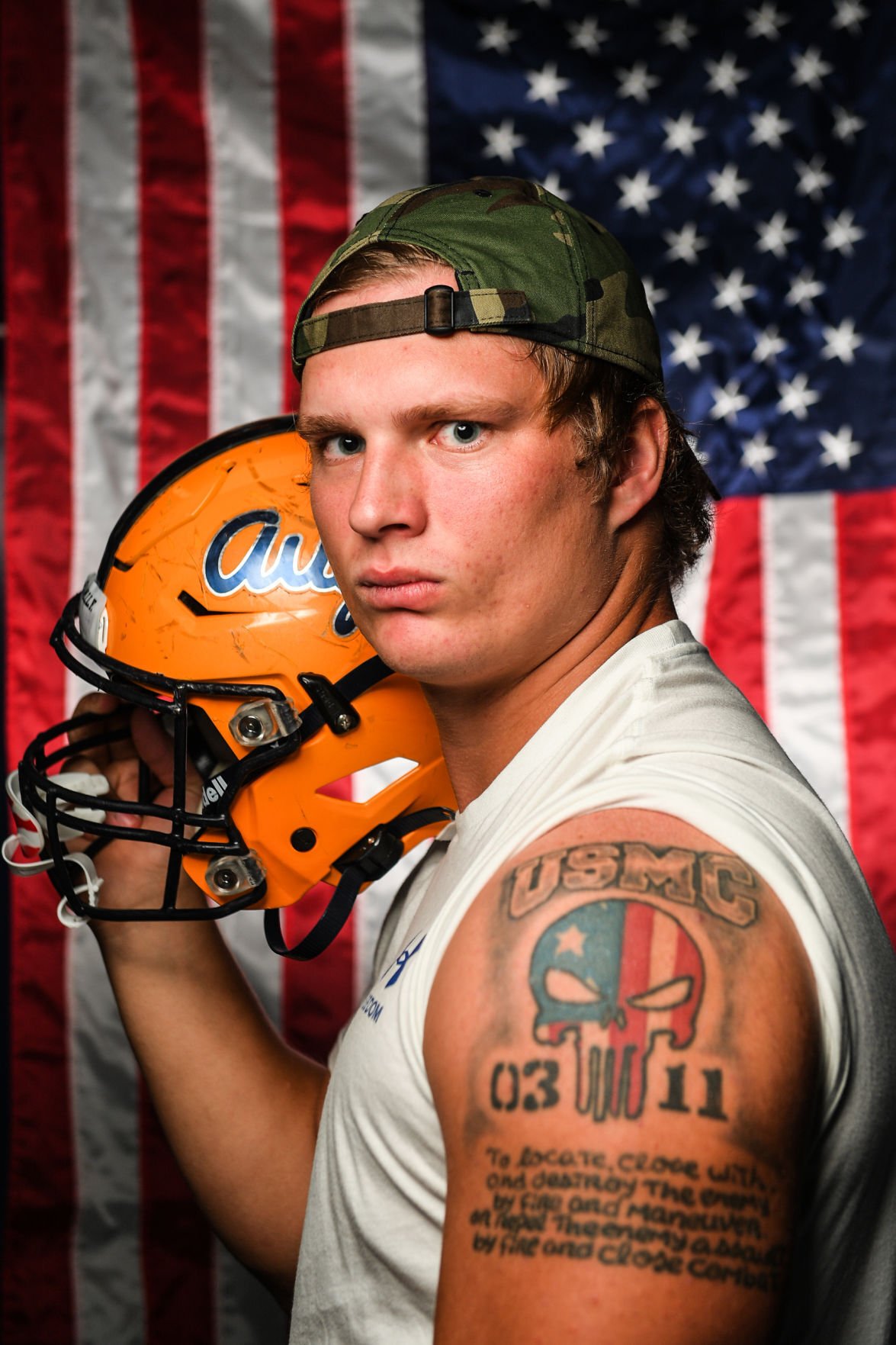 Brian Morrisey, an Alleman High School alum and former Pioneer football standout, is back on the football field for the Augustana Vikings after serving four years in the Marine Corps. 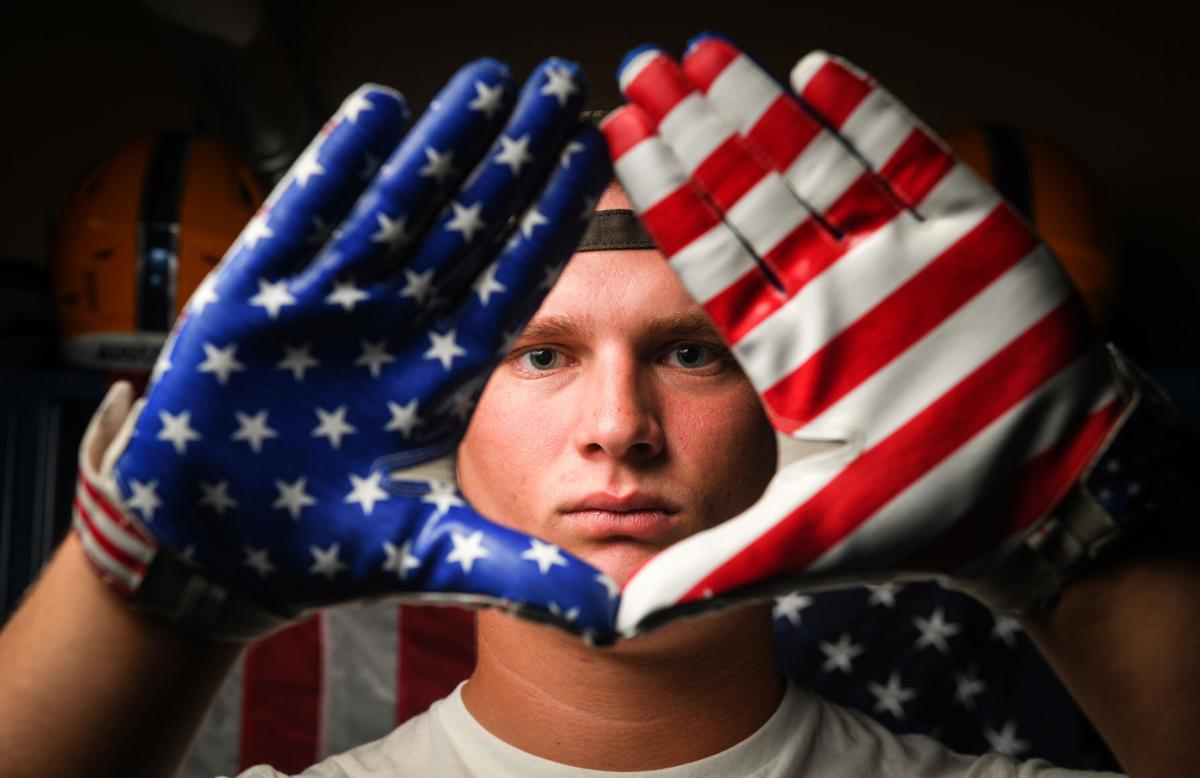 Brian Morrisey is not your typical freshman football player at Augustana College. The 22-year-old former Alleman High School standout is back on the football field for the Vikings after serving four years in the Marine Corps.

Brian Morrisey admits that he got some strange looks when he reported for camp with the rest of the freshmen on the Augustana College football team a few months ago.

“The guys really didn't know what to think at first, to be honest with you,”  Morrisey said.

It's hard to argue with that reaction.

Morrisey is hardly your traditional first-year college student and football player. While most of his classmates came in with deer-in-headlights apprehension, Morrisey stood apart, carrying 260 pounds on a chiseled 6-foot-5 frame and the glare of someone who has endured numerous life experiences.

No other first-year Viking has served four years in the Marine Corps and traveled the globe helping protect his country's interests in many corners of the world.

To say the former Alleman High School football standout and graduate has a unique story is an understatement.

“It's as weird as it sounds,” said Morrisey of his situation with a chuckle and smile. “I thought it would be more awkward coming into it, but the guys on the team have been super understanding of everything and realize I'm on a different level than everybody else.

"As far as I'm concerned, I am a freshman and I'm not trying to be above anybody in this program. I'm just trying to come in and apply what I learned in the Marine Corps and be the best teammate that I can.”

It also has left him in a different spot than most freshmen playing college ball — especially those who haven't grabbed attention by putting up big numbers.

“Being a 22-year-old freshman, all the other freshmen sort of find my story interesting and unique,” said Morrisey, admitting he has found teammates looking up to him when they realize his life experiences.

But leading others on a team is nothing new for Morrisey. That was just one attribute that carried over from his four-year military stint.

“Being a squad leader in the Marine Corps and literally being in charge of the livelihoods of 13 guys, you learn a lot more about how to lead and different types of leadership techniques and how to mesh a team together,” Morrisey said. “That, by far, has been one of my favorite traits that carried over.

“The other one was work ethic. In the Marine Crops, there were no days off; you're training 24/7. That transitions well into a football program.”

But that transition hasn't always been easy, he admitted.

“Going from everything in my life being regimented, having a mission and a way to do it to going to free time and not really knowing what was going on,” he said of finding his civilian footing again. “I got almost depressed because I didn't really know what to do with myself. When football started up, all of a sudden I had a mission and a purpose again. Competing for Augustana is absolutely a blessing.”

And one that he said he was glad he waited for when Viking coach Steve Bell called him after his tour finished in June.

“About a month before I got out of the Marine Corps, Coach Bell called me and said, 'Hey, I heard you're getting out and I'd love to have you.' I absolutely wanted to play football again. I missed football and I loved it. So we went from there.”

Bell said that he recruited Morrisey when he was a high school senior, but those efforts were for naught.

“My dad was a marine, so that was something I wanted to do since I could remember,” Morrisey said. “I knew going out of high school that I had to enlist, so I went that route.”

That enlistment added to the family legacy. He followed his dad, Brian Sr., and uncle, Steve, into the Marines. His brother, Matthew, has added to that tradition.

While serving with the 11th Marine Expedition Unit, Morrisey said he was sent to Thailand, Kuwait, Jordan, Malaysia and Japan, among other deployments.

“Seeing the world was a great experience and something I think I definitely needed to see how the world is actually run and how it works and whatnot,” Morrisey said. “It gives you a new perspective on the homeland and a new appreciation for America, absolutely.”

The adjustment to a new life is still ongoing, admitting he misses that life “every single day.

“I miss the absolute hell out of it,” he said. “Being a team leader and a squad leader in a Marine infantry unit was the best job I'll ever have. I absolutely loved every second of it.”

But being back on the football field and studying kinesiology in hopes of someday becoming a strength and conditioning coordinator for a football program is helping fill that void.

“I love this. This has been an absolute blast,” he said of getting back in the pads and adjusting to life in new trenches. “I love playing for Coach Bell and this program and what they've got going on and competing with the guys. This is awesome.”

After being a 190-pound running back and defensive back for the Pioneers, another shift has taken place for Morrisey. He is learning a new position, playing a mostly blocking tight end (he has one catch for five yards so far this season). He said he has also been incorporated into a few special defensive packages.

“Going from mainly having the ball in your hand and attacking the line of scrimmage to knowing the guy across from you is a one-on-one battle ... it is different,” Morrisey said. “The footwork is different, the techniques, everything is different. But I kind of like it a little bit more because it's more man-to-man ... and I love that aspect of it.”

He said the “football itch” was too big to ignore and this is definitely satisfying those needs even when he hits a bump or two. Like when he was enlisted, he now has a different team to rely on and appreciates everything that is being done for him.

“I just tried to come in and be friendly and they have been nothing but supportive of the difficult transition from military to civilian life for me,” he said of his new teammates and coaches. “I can't thank them enough; they've been an absolute blessing in my life and I love every single one of them.”

Time is right for Timm to shine at Augie

Augustana College football coach Steve Bell has a birds-eye view of the Lindberg Stadium playing field, and the coach liked what he saw on the shimmering turf this past summer.

After loss, Hawkeye defense returns to its roots

Following a struggle-filled outing against Purdue, the Iowa football team's defense is returning to its roots.

AMES — Iowa State University had one of the best offensive lines in all of college football last season.

IOWA CITY — In his role as the strength and conditioning coordinator for the Iowa football program, Raimond Braithwaite currently has one eye on the present and one on the future.

For the second time this season, the Augustana College football team lost a game on the final play of the contest.

One step forward, one step back.

On a week where none of the top eight teams from last week's ballot lost, I did shuffle a couple of things around near the top of the my ballot for this week's Associated Press college football poll.

Hawkeyes work together to grow offense

IOWA CITY – It is easy to single out one player or one position group when trying to dissect issues that have impacted offensive production for the University of Iowa football team.

It was a relatively quiet week at the top of my ballot for the Associated Press college football poll.

Brian Morrisey, an Alleman High School alum and former Pioneer football standout, is back on the football field for the Augustana Vikings after serving four years in the Marine Corps.

Brian Morrisey is not your typical freshman football player at Augustana College. The 22-year-old former Alleman High School standout is back on the football field for the Vikings after serving four years in the Marine Corps.