Iowa defensive end Chauncey Golston (57) reacts after intercepting a pass against Northwestern during a game last season. Golston is the only returning starter in the Hawkeyes' defensive line for this season. 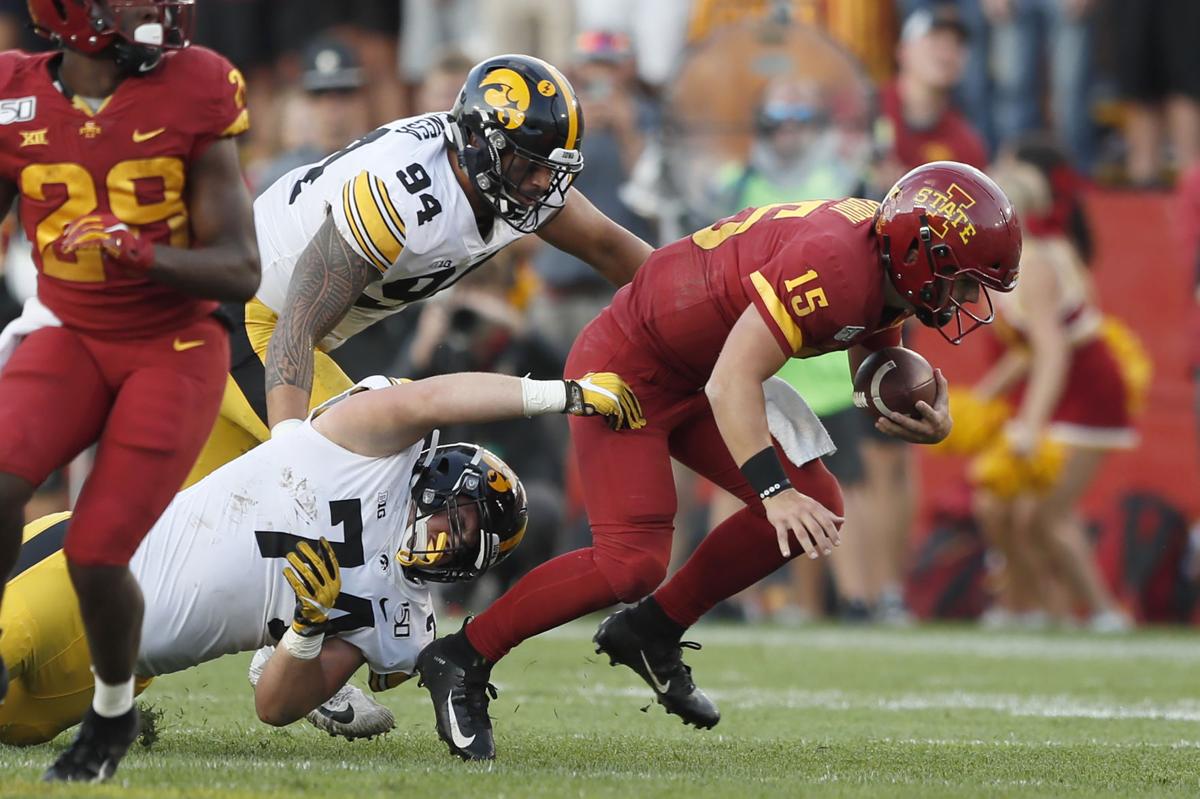 Iowa State quarterback Brock Purdy (15) is tackled by Iowa's Austin Schulte (74) and A.J. Epenesa (94) during their game last season. While Epenesa is off the to NFL, Schulte has assumed a leadership role on a revamped Iowa line.

For most of the past few years, Chauncey Golston has just been one of the guys.

Players such as Jahlil Johnson, Parker Hesse, Anthony Nelson and A.J. Epenesa took the lead roles among the defensive linemen on the Iowa football team and Golston just sort of followed along. It was the same way with Austin Schulte.

Not anymore. With all those other players gone to the NFL, Golston and Schulte have become the lead dogs in a position group that probably has more question marks than any other part of the Hawkeyes’ team entering the new season.

"When you get here, it’s all about growing up and becoming one of those leaders …," Golston said on a video interview with reporters Thursday.

"The coaching staff has really done a good job of preparing me for the added load."

What no one knew, of course, was that Golston and Schulte were going to need to step into this larger leadership role in the midst of a worldwide pandemic.

That has complicated things.

"You definitely find out your true colors and find out how good you are at adjusting on the fly," Schulte said on Thursday’s video chat. "When you don’t have any control over the situation, that’s all you can do with a bad situation."

Golston, who was second on the team with 9.5 tackles for loss and 3 sacks last season, is the Hawkeyes’ only returning starter in the defensive line.

He started every game at left end with Epenesa, who was drafted in the second round by the Buffalo Bills last month, anchoring things on the other side.

There are only two other returning players who saw any action at defensive end — sophomore John Waggoner and senior Zach VanValkenburg — and they didn’t play much. Some younger players, possibly including Orion’s Logan Lee, are likely to figure prominently in the plans there.

There is more experience returning at tackle, where departed seniors Cedric Lattimore and Brady Reiff were the starters most of the time. Schulte, junior Davyion Nixon and sophomore Noah Shannon all saw action there, and the Hawkeyes got an added boost Thursday when Prophetstown’s Jack Heflin decided to transfer to Iowa.

Nixon is a budding star and Heflin was a three-year starter at Northern Illinois. Schulte, who never played a down before being named Iowa’s defensive comeback player of the year last season, indicated that he doesn’t really care if he gets to start or not.

"I really just want to contribute to the team as much as I can," he said. "If that’s a starting role, then so be it. I just want to be ready to play my best football when the time comes."

For now, Golston and Schulte are doing everything they can to not only get ready for the season themselves but to get others ready, too.

"There’s only one way you can do it and that’s by getting everyone together mentally," Golston said. "We’re not together now physically so you’ve got to bring guys along mentally and have them be ready for every situation."

Golston, from Detroit, is one of several players who has stayed in Iowa City throughout the COVID-19 crisis.

Strength coach Chris Doyle set up weightlifting stations in town at the homes of six different players that are open for all players to use.

Golston said the players also have tried to get in outdoor workouts at some of the high school fields in the area but have generally been asked to leave the premises at those places.

There have been a lot of group meetings on Zoom and email exchanges.

Doyle even sent out ideas to all the players on how to eat healthy and cook for themselves, and the players who stayed in Iowa City receive a $105 weekly stipend for food.

But Golston admitted it’s not always easy to discipline yourself to do the right things on your own. It’s always tempting to order a pepperoni pizza instead of cooking up some vegetables and to blow off weight workouts.

"I want to get back as soon as possible because sometimes you wake up and without having a structured day, it’s like ‘Do I really want to go downstairs to the garage and lift?’" he said. "When you’re in the facility, there’s no asking if I want to do it. You have to do it."

Schulte has spent the past few months at home in Pella trying to stay ready.

He set up a weightlifting station in the garage and has been doing some basic drills against his younger brother, who will be a sophomore on the football team at Pella High School this fall.

"It’s a little different going against your brother who is 190 pounds vs. getting hit by Tristan Wirfs and (Alaric Jackson)," Schulte said.

Like Golston, he is eager to get the team back together and start showing that the defensive line can be a strength of the team, just as it has been in the past.

"I’m super, super excited to get back, whenever that is," Schulte said. "The strength coaches and the position coaches have been harping on staying ready so you don’t have to get ready when we come back …

"You miss that environment of togetherness and competitiveness. You don’t have that when you’re by yourself."

Iowa defensive end Chauncey Golston (57) reacts after intercepting a pass against Northwestern during a game last season. Golston is the only returning starter in the Hawkeyes' defensive line for this season.

Iowa State quarterback Brock Purdy (15) is tackled by Iowa's Austin Schulte (74) and A.J. Epenesa (94) during their game last season. While Epenesa is off the to NFL, Schulte has assumed a leadership role on a revamped Iowa line.